The sinoatrial nodal artery is a branch of the main coronary arteries, or its derivatives, which supplies blood to the pacemaker of the heart, the sinoatrial node. It can also supply blood to the crista terminalis and the free walls of both the left and right atrium. It most commonly originates from the right coronary artery (68% of patients) and less commonly from the left coronary artery and left circumflex artery (24.7% of patients).[1] The sinoatrial node is a vital component to normal heart function as it provides the initial electrical signal for atrial contraction and sends conductivity signals to the atrioventricular node. The sinoatrial nodal artery is a crucial component to supply this specialized myocardial tissue with adequate oxygen and nutrients necessary for healthy activity.

The sinoatrial nodal artery consists of three layers - adventitia, media, and intima. The outermost layer is the adventitia and consists of collagen and elastic tissue which provides the artery with pliability and strength. Furthermore, the adventitia contains the artery’s blood supply, also known as the vasa vasorum, nerves, and lymphatic vessels. Lying inside the adventitia is the media layer of the artery which contains multiple layers of smooth muscle. This smooth muscle allows for vasoconstriction or vasodilation of the artery to allow the tissue to meet its metabolic requirements. Additionally, the medial layer contains connective tissue consisting of elastic fibers, collagen, and proteoglycans, which provides for the further structural integrity of the artery. The intimal layer lines the inside of the artery and consists of endothelial cells, smooth muscle cells, and a subendothelial layer with associated connective tissue. The endothelial cells are aligned longitudinally and allow the artery to have a selective barrier to diffusion for the other layers. The endothelial cells also produce prostacyclin, PGI, which acts as an antithrombotic agent and they also produce von Willebrand factor which acts as a prothrombotic agent. Also, the endothelial cells release growth factors, lipoprotein receptors, and some inflammatory mediators.

The sinoatrial nodal artery functions to provide oxygen and nutrients predominantly to the sinoatrial nodal tissue; however, it has been known to supply collateral branches to the atrium and auricles of the same side as its origin and in some cases to the opposing side. Oxygen is a crucial component to allow for the normal function of tissue, and without it, viability would not be possible. As the artery approaches the capillary bed of the tissue, it thins out, and the endothelial cells allow the selective permeability of nutrients necessary for viability.[3][4] These nutrients consist of electrolytes, vitamins, and glucose essential to meet the metabolic demands of the tissue. Any alteration of this delicate balance could be devastating to the tissue and lead to life-threatening complications.

The embryological derivation of the coronary arteries have been a long-studied topic, and the results remained ambiguous for decades until a recent study. This research concluded that coronary vessels sprout from the sinus venous predominantly.[5] The endothelial cells of the sinus venous grow onto the developing heart where they dedifferentiate to form the coronary plexus.[6] It is from there they further develop into arteries, arterioles, capillary beds, and the venous system. The study also noted a secondary source which is present in the endocardiac tissue where blood islands form. These blood islands join with the coronary plexus at the site of the interventricular septum. Local signals released from developing tissue schedule this dedifferentiation and redifferentiation of endothelial tissue from the sinus venous. It is also these signals which guide the pathway of the coronary vessels and the tissue into which it will redifferentiate. Eventually, the coronary vascular system is in place and joins with the aorta at the coronary ostium.[7]

The sinoatrial node is an aggregation of specialized myocardial tissue located in the right atrium of the heart which spontaneously releases electrical signals to the atrial tissue and atrioventricular node signaling the heart to contract. Its more colloquial name is the “pacemaker” of the heart. Like any living tissue, it has a metabolic requirement to function appropriately. As stated above, this tissue receives vascular supply via the sinoatrial nodal artery, and if there is any disruption to this blood supply, devastating consequences can result such as arrhythmias.[10]

Coronary artery disease ranks as one of the leading causes of death in the United States, and this is predominately due to disruptions to the vasculature supplying the heart. Risk factors of coronary artery disease are numerous, but the most significant are smoking, male gender, family history of coronary artery disease, increased LDL, decreased HDL, and hypertension, which can lead to the formation of atherosclerotic plaques in the arterial lining and progressively limit the blood supply passing through the artery or lead to thrombotic events. If the artery is not able to transport enough blood to meet the tissues metabolic requirements the tissue can become non-viable leading to tissue necrosis. Furthermore, like any other artery, the sinoatrial nodal artery can be prone to aneurysms. Though these are rare, they occur mainly in proximal or midportions of the artery. They are usually secondary to atherosclerotic lesions and treatable with surgical approaches.[11] 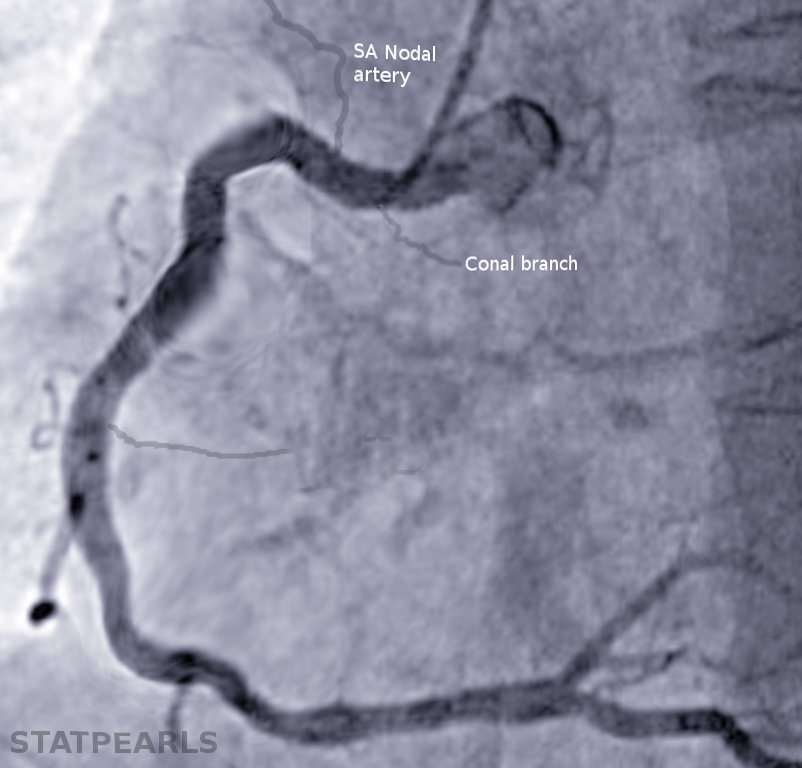