An inguinal hernia is one of the most common surgical pathologies encountered by a general surgeon. Worldwide, there are more than 20 million inguinal hernia repairs performed annually, with about 800000 performed each year in the United States. Occasionally, there is involvement of the ureter, a retroperitoneal organ, though this is rare. This activity describes the evaluation and management of patients with inguinal hernias and highlights the interprofessional team's role in improving care for affected patients.

Specific imaging studies are not routinely obtained in the preoperative workup of an inguinal hernia. However, if concerning signs of symptoms as stated above are noted, these findings should prompt preoperative imaging. An ultrasound may demonstrate hydronephrosis of the ipsilateral kidney. Intravenous pyelography may demonstrate the telltale “curlicue” sign, with the ureter seen in a pathognomonic spiral or loop-the-loop formation. In patients with unexpected abnormal renal function, Gellett describes the potential for preoperative diagnosis by computed tomography (CT) with confirmation of a ureteral inguinal hernia on delayed, post-contrast, 3-dimensional reconstruction.[9] CT or magnetic resonance imaging (MRI) may show the ureter entering the inguinal canal or extending beyond the bony pelvis. Nephroptosis visible on cross-sectional imaging may accompany ureteral inguinal hernia. This phenomenon is likely due to the loss of the perirenal supportive tissue into the hernia sac, rather than traction of the ureter on the kidney.

A ureteral-inguinal hernia repair should be performed in an open manner, not laparoscopically, if diagnosed preoperatively.[5] Repair of ureteral inguinal hernias may involve a simple reduction of the ureter with the hernia sac. Depending on the length of ureter involved, repair may require resection of the redundant ureter with primary anastomosis, ureteroneocystostomy, psoas hitch, Boari flap, or transureteroureterostomy.[8] The surgeon should resect the necrotic or dilated areas of the ureter. In the case of a complicated repair, postoperative CT imaging should be done to ensure the patency and proper placement of the ureter back in the retroperitoneal space. Ureteral protection with a ureteral stent improves the identification of an involved ureter when it is known preoperatively.[5] In a patient unable to withstand an operation, palliation of obstructive uropathy may also be achieved by placement of a nephrostomy tube or a nephro-ureteral stent.[10]

The differential diagnosis includes the following:

Most patients undergoing any form of inguinal hernia repair generally have a good prognosis, as hernia repair surgery is both safe and effective. Following open surgery, the patient can usually resume their normal activities within a week or two. After any hernia surgery, the patient should avoid heavy lifting for six to eight weeks to permit full healing of all muscles and other tissues.[11]

Complications of an inguinal hernia include possible incarceration or strangulation of the hernia. Strangulation is a life-threatening emergency. If not repaired, hernias tend to enlarge over time.

Following surgery, patients should receive counsel to maintain healthy body weight and avoid activities that involve heavy lifting or even straining during bowel movements. Following these instructions can prevent the recurrence of the hernia. 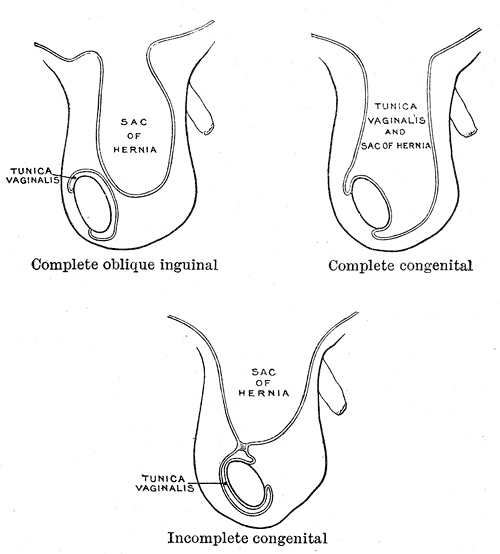 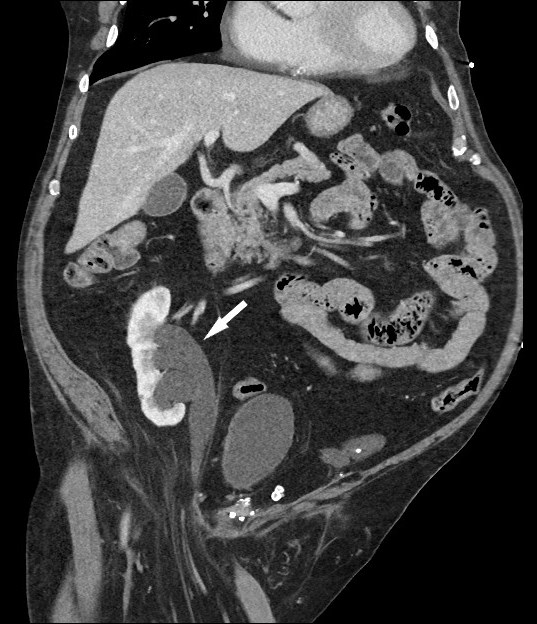 CT of the abdomen and pelvis. Marked hydronephrosis (arrow) of the right kidney can be seen on coronal images, with the right ureter extending caudally with the inguinal hernia.
Contributed by Vijaya Nirujogi, MD 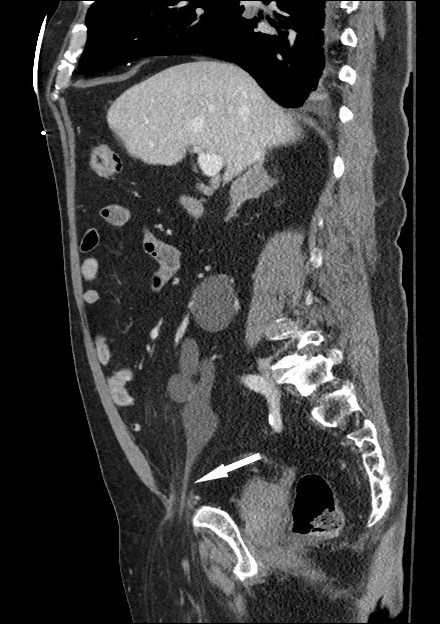 Computed tomography abdomen / pelvis with intravenous contrast of an ureteroinguinal hernia. On sagittal section the ureter can be seen extending into the inguinal canal (arrow).
Contributed by Vijaya Nirujogi.