Our nails are an essential sensory organ. The tips of the digits are composed of almost all tissues components found elsewhere in the human body: skin, joint, bone, synovial membrane, ligaments, tendons, arteries, veins, lymphatic vessels, tendon sheaths, nerves, and specialized nervous end organs.[1] The nail plate is made up of laminated keratinized structure on the nail matrix, nail bed with the distal onychodermal band and the hyponychium at the first edge. Some toenails can have a lunula at the distal part of the matrix, characterized by the half-moon shape. The nail plate is embedded in the proximal and lateral folds. The cuticle adheres to the proximal nail fold. The nails possess both complex vascular and nerve networks to ensure adequate blood supply and sensory innervation. All these structures listed function together to provide healthy, growing nails.[2]

The nail unit consists of the nail plate and periungual tissues. Each unit is listed below.

The nail bed is epithelium that provides firm attachment to the dermis. The nail plate makes up only one-third of the length of the nail unit, and only the distal portion is visible, as most remains hidden underneath the proximal nail fold.  It extends from the distal margins of the lunula to the hyponychium.[2]

The nail plate is a modified stratum corneum that serves as a laminated keratinized structure that protects the nail bed and matrix. It is considered a bilaminar structure that provides its thickness and density as it grows distally. There are both longitudinal and transverse axes in the nail plate. These axes provide strong attachments. In the great toe, the lateral margins of the matrix and nail extend almost halfway around the terminal phalanx, which provides additional strength.[5]

Grossly, the upper surface of the nail can be smooth with some rigidity depending on the age of the patient. In childhood, there are partial oblique ridges called herringbone or chevron pattern. With age, longitudinal ridges become more common.[2]

The hyponychium is where the nail plate and nail bed separate. It is the epithelium equivalent of the skin contains granular and thickens cornified layers. It serves as a barrier from outside material from entering between the nail bed and plate, which is why it exhibits strong keratinization.[6]

There are three total nail folds, two laterally, and one proximally. These function to direct the nail growth in the correct direction and shape.[1] The lateral nail folds provide the lateral cutaneous margins of the nails. These folds are prominent in the toenails. If these folds become weakened or compromised, the risk of infectious disease and onycholysis increases. There can be pathologic ingrowing, commonly seen in the big toe, can result from trauma to the area. The proximal nail fold adheres to the dorsal aspect of the nail plate and combines with the nail plate to provide protection. The keratin layer of the proximal nail fold forms the cuticle. This structure serves as a seal against chemicals that might disrupt the nail matrix function. Compromise of this function can result in a transverse groove due to inflammation in the nail matrix. These are known as Beau lines.[2]

Growth measurement is in the longitudinal axis from a defined reference point to the free edges. Nails do grow continuously. However, both age and poor circulation can decrease growth rate. Toenails do grow slower than fingernails. The time for a toenail to undergo full replacement is about 12 to 18 months. The toenails grow about 1mm in a month. Several systemic diseases, for example, scarlet fever, can cause a reduction in the rate of matrix-cell division, causing thinning of the nail plate. Typically, toenails in women are about 1.4 mm thick and 1.65 mm thick in men.[7]

The dorsum of the proximal nail fold is similar to the skin of the digits. The ventral aspect is thin and flat epidermis. Between them, there is thick stratum corneum making the nail cuticle. The nail matrix has multilayered epithelium as it serves as the production of the nail plate. It is the sole site of hard keratin synthesis. The nail bed epithelium is thin and lacking a stratum granulosum layer. The stratum granulosum layer reappears in the hyponychium, the distal thickened part of the nail bed. The distal matrix is composed of loose and edematous tissue. The dermis contains multiple glomus bodies, which represent arteriovenous anastomosis. The nail plate itself is composed of multiple paralleled layers of keratinized, flat well-differentiated cells called onychocytes. These cells are firmly adherent and do not desquamate.[3]

The beginning stages of nail growth becomes evident around eight weeks of gestational age. The nail primordium begins as a transverse ridge on the distal dorsal surface of the digit. As the week progress, the ridge extends proximally and becomes invaginated beneath the developing proximal nail fold. The outline is evident by 16 weeks gestational age. The matrix is a band of the highly proliferative epithelium in which production of the proximal nail plate occurs. There is less proliferation activity distally to create a convex curve of the plate. By month 5, the nail plate has completely covered the nail bed.[1][8]

The nail unit is relatively vascular. It receives vascular supply from both the volar and dorsal proper digital arteries. The merge together around the distal interphalangeal joint. They give small branching vessels called the arcades that provide the proximal nail fold, matrix, and nail bed. Between the arcades are small arteries running parallel along the nail bed longitudinally. Because of the orientation of these vessels, it is essential if possible, to biopsy longitudinally.[6]

The digit gets its supply by two dorsolateral and two ventrolateral arteries that lack an internal elastic lamina. They have a tortuous route and morphology that helps withstand the various movements and flexions without damage. Between these branches, numerous communications provide the digit with a blood supply in multiple directions, which ensures continued blood flow in the events of trauma and any hand positioning that decreases delivery from ventral vessels.[9]

A unique feature of the nail unit is a vascular unit called the glomus bodies. These function as organs for thermoregulation. They are afferent and efferent vessels with vascular lumina and innervated glomus cells with contractile function. These units are through to be the origin of a type of hamartoma that can present on the nails called glomus tumors. Glomus tumors typically show as painful lesions on the nails.[6]

The nail unit of the lower extremity, the nails are innervated by the plantar digital nerves. These digital nerves are branches from the medial and lateral plantar nerve. The medial plantar nerve has three branches which provide the sensation for the great toe, second, third, and fourth toe. The lateral plantar nerve communicates with a distal branch of the medial plantar nerve to provide sensation for the fourth and fifth toes. Similar to the vascular supply of the digit, there are two dorsal and two ventral branches with overlapping sensory areas. There are several nerve fibers in the fingers due to their essential role of sensory perception. There are numerous type 1 fibers that transmit pain, Meissner, and Pacinian bodies that carry touch and temperature sensing fibers.[1]

A nail biopsy can provide additional concrete information when it comes to diagnoses of disease. But it is far more complicated compared to skin biopsies. A punch biopsy should be performed to get a full biopsy of the nail bed, the matrix, and the folds. However, longitudinal nail biopsies provide the most accurate information. A straight incision is possible through the proximal nail fold to the hyponychium and a second incision parallel to that providing a long rectangular shaped piece of tissue contain all nail components.[6]

The nail can be the first clue to different types of cutaneous or systemic diseases. The nail examination is underutilized and should be a part of every annual full body skin check. Several different types of conditions can involve the nail. Below are the names and findings of several nail diseases: 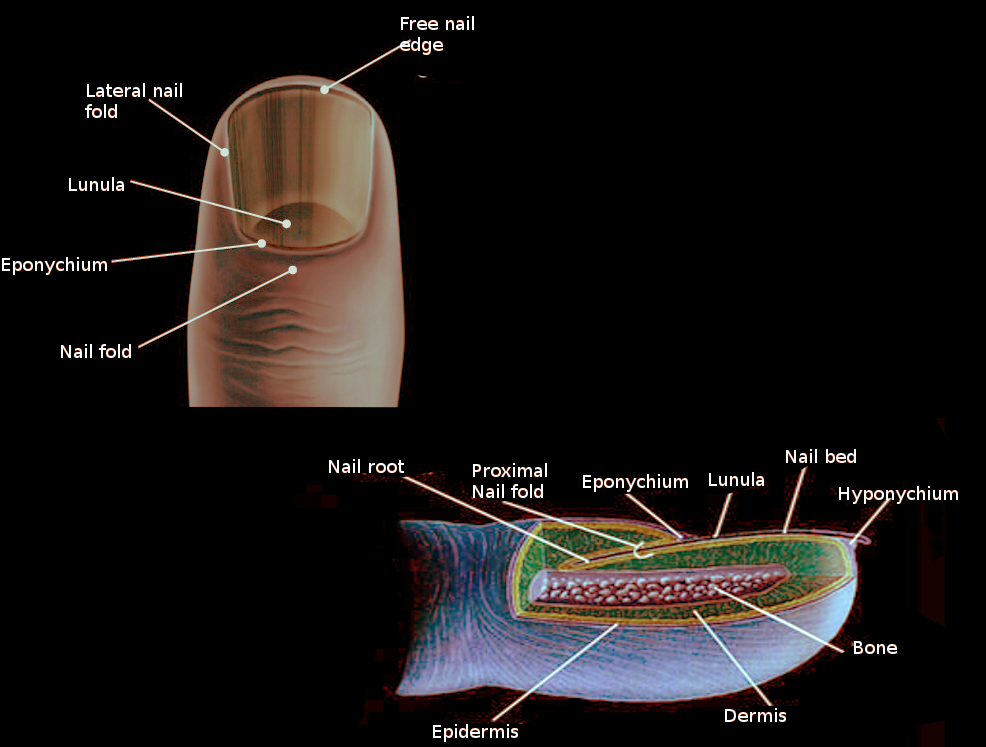