History of Present Illness: A 33-year-old white female presents after admission to the general medical/surgical hospital ward with a chief complaint of shortness of breath on exertion. She reports that she was seen for similar symptoms previously at her primary care physician’s office six months ago. At that time, she was diagnosed with acute bronchitis and treated with bronchodilators, empiric antibiotics, and a short course oral steroid taper. This management did not improve her symptoms, and she has gradually worsened over six months. She reports a 20-pound intentional weight loss over the past year. She denies camping, spelunking, or hunting activities. She denies any sick contacts. A brief review of systems is negative for fever, night sweats, palpitations, chest pain, nausea, vomiting, diarrhea, constipation, abdominal pain, neural sensation changes, muscular changes, and increased bruising or bleeding. She admits a cough, shortness of breath, and shortness of breath on exertion.

Social History: Her tobacco use is 33 pack-years; however, she quit smoking shortly prior to the onset of symptoms, six months ago. She denies alcohol and illicit drug use. She is married, in a monogamous relationship, and has three children aged 15 months to 5 years. She is employed in a cookie bakery. She has two pet doves. She traveled to Mexico for a one-week vacation, one year ago.

General: She is well appearing but anxious, a pleasant female lying on a hospital stretcher. She is conversing freely, with respiratory distress causing her to stop mid-sentence.

Respiratory: She has diffuse rales and mild wheezing; tachypneic.

Cardiovascular: She has a regular rate and rhythm with no murmurs, rubs, or gallops.

Laboratory Studies: Initial work-up from the emergency department revealed pancytopenia with a platelet count of 74,000 per mm3; hemoglobin, 8.3 g per and mild transaminase elevation, AST 90 and ALT 112. Blood cultures were drawn and currently negative for bacterial growth or Gram staining.

CT Chest was performed to further the pulmonary diagnosis; it showed a diffuse centrilobular micronodular pattern without focal consolidation.

On finding pulmonary consolidation on the CT of the chest, a pulmonary consultation was obtained. Further history was taken which revealed that she has two pet doves. As this was her third day of broad-spectrum antibiotics for a bacterial infection and she was not getting better, it was decided to perform diagnostic bronchoscopy of the lungs with bronchoalveolar lavage to look for any atypical or rare infections and to rule out malignancy (Image 1).

Bronchoalveolar lavage returned with a fluid that was cloudy and muddy in appearance. There was no bleeding. Cytology showed Histoplasma capsulatum.

Based on the bronchoscopic findings, a diagnosis of acute pulmonary histoplasmosis in an immunocompetent patient was made.

Pulmonary histoplasmosis in asymptomatic patients is self-resolving and requires no treatment. However, once symptoms develop such as in our above patient, a decision to treat needs to be made. In mild, tolerable cases no treatment other than close monitoring is necessary. However, once symptoms progress to moderate or severe or if they are prolonged for greater than four weeks, treatment with itraconazole is indicated. The anticipated duration is 6 to 12 weeks total. The response should be monitored with a chest x-ray. Furthermore, observation for recurrence is necessary for several years following the diagnosis. If the illness is determined to be severe or does not respond to itraconazole, amphotericin B should be initiated for a minimum of 2 weeks, but up to 1 year. Cotreatment with methylprednisolone is indicated to improve pulmonary compliance and reduce inflammation, thus improving work of respiration.[1][2][3]

Histoplasmosis, also known as Darling disease, Ohio valley disease, reticuloendotheliosis, caver's disease, and spelunker's lung, is a disease caused by the dimorphic fungi Histoplasma capsulatum native to the Ohio, Missouri, and Mississippi River valleys of the United States. The two phases of Histoplasma are the mycelial phase and the yeast phase.

Histoplasmosis is caused by inhaling the microconidia of Histoplasma spp. fungus into the lungs. The mycelial phase is present at ambient temperature in the environment, and upon exposure to 37 C, such as in a host’s lungs, it changes into budding yeast cells. This transition is an important determinant in the establishment of infection. Inhalation from soil is a major route of transmission leading to infection. Human-to-human transmission has not been reported. Infected individuals may harbor many yeast-forming colonies chronically which remain viable for years after initial inoculation. The finding that individuals who have moved or traveled from endemic to non-endemic areas may exhibit a reactivated infection after many months to years supports this long-term viability. However, the precise mechanism of reactivation in chronic carriers remains unknown.

Infection ranges from an asymptomatic illness to a life-threatening disease, depending on the host’s immunological status, fungal inoculum size, and other factors. Histoplasma spp. have grown particularly well in organic matter enriched with bird or bat excrement, leading to the association that spelunking in bat-feces-rich caves increases the risk of infection. Likewise, ownership of pet birds increases the rate of inoculation. In our case, the patient did travel outside of Nebraska within the in last year and owned two birds; these are her primary increased risk factors.[4]

Non-immunocompromised patients present with a self-limited respiratory infection. However, the infection in immunocompromised hosts disseminated histoplasmosis progresses very aggressively. Within a few days, histoplasmosis can reach a fatality rate of 100% if not treated aggressively and appropriately. Pulmonary histoplasmosis may progress to a systemic infection. Like its pulmonary counterpart, the disseminated infection is related to an exposure to soil containing infectious yeast. The disseminated disease progresses more slowly in immunocompetent hosts compared to immunocompromised hosts. However, if the infection is not treated, fatality rates are similar. The pathophysiology for a disseminated disease is that, once inhaled, Histoplasma yeast are ingested by macrophages. The macrophages travel into the lymphatic system where the disease, if not contained, spreads to different organs in a linear fashion following the lymphatic system and ultimately into systemic circulation. Once this occurs, a full spectrum of disease is possible. Inside the macrophage, this fungus is contained in a phagosome. It requires thiamine for continued development and growth and will consume systemic thiamine. In immunocompetent hosts, strong cellular immunity including macrophages, epithelial, and lymphocytes surround the yeast buds to keep infection localized. Eventually, it will become calcified as granulomatous tissue. In immunocompromised hosts, the organisms disseminate to reticuloendothelial system, leading to progressive disseminated histoplasmosis.[5][6]

Symptoms of infection typically begin to show within three to17 days. Immunocompetent individuals often have clinically silent manifestations with no apparent ill effects. The acute phase of infection presents as nonspecific respiratory symptoms including a cough and flu. A chest x-ray is read as normal in 40% to 70% cases. Chronic infection can resemble tuberculosis with granulomatous changes or cavitation. The disseminated illness can lead to hepatosplenomegaly, adrenal enlargement, and lymphadenopathy. The infected sites usually calcify as they heal. Histoplasmosis is one of the most common causes of mediastinitis. Presentation of the disease may vary as any other organ in the body may be affected by the disseminated infection.[7]

The clinical presentation of the disease has a wide-spectrum presentation which makes diagnosis difficult. The mild pulmonary illness may appear as a flu-like illness. The severe form includes chronic pulmonary manifestation which may occur in the presence of underlying lung disease. The disseminated form is characterized by the spread of the organism to extra pulmonary sites with proportional findings on imaging or laboratory studies. The Gold standard for establishing the diagnosis of histoplasmosis is through culturing the organism. However, diagnosis can be established by histological analysis of samples containing the organism taken from infected organs. It also can be diagnosed by antigen detection in blood or urine, by PCR, or by enzyme-linked immunosorbent assay. The diagnosis also can be made by testing for antibodies again the fungus.[8]

Pulmonary histoplasmosis in asymptomatic patients is self-resolving and requires no treatment. However, once symptoms develop such as in our above patient a decision to treat needs to be made. In mild, tolerable cases, no treatment other than close monitoring is necessary. However, once symptoms progress to moderate or severe or if they are prolonged for greater than four weeks, treatment with itraconazole is indicated. The anticipated duration is 6 to 12 weeks. The patient's response should be monitored with a chest x-ray. Furthermore, observation for recurrence is necessary for several years following the diagnosis. If the illness is determined to be severe or does not respond to itraconazole, amphotericin B should be initiated for a minimum of 2 weeks, but up to 1 year. Cotreatment with methylprednisolone is indicated to improve pulmonary compliance and reduce inflammation, thus improving the work of respiration.

The disseminated disease requires similar systemic antifungal therapy to pulmonary infection. Additionally, procedural intervention may be necessary, depending on the site of dissemination, to include thoracentesis, pericardiocentesis, or abdominocentesis. Ocular involvement requires steroid treatment additions and necessitates ophthalmology consultation. In pericarditis patients, antifungals are contraindicated because the subsequent inflammatory reaction from therapy would worsen pericarditis.

Patients may necessitate intensive care unit placement dependent on their respiratory status, as they may pose a risk for rapid decompensation. Should this occur, respiratory support is necessary, including non-invasive BiPAP or invasive mechanical intubation. Surgical interventions are rarely warranted; however, bronchoscopy is useful as both a diagnostic measure to collect sputum samples from the lung and therapeutic to clear excess secretions from the alveoli. Patients are at risk for developing a coexistent bacterial infection, and appropriate antibiotics should be considered after 2 to 4 months of known infection if symptoms are still present.[9]

If not treated appropriately and in a timely fashion, the disease can be fatal, and complications will arise such as recurrent pneumonia leading to respiratory failure, superior vena cava syndrome, fibrosing mediastinitis, pulmonary vessel obstruction leading to pulmonary hypertension and right-sided heart failure, and progressive fibrosis of lymph nodes. Acute pulmonary histoplasmosis usually has a good outcome on symptomatic therapy alone, with 90% of patients being asymptomatic. Disseminated histoplasmosis, if untreated, results in death within 2 to 24 months. Overall, there is a relapse rate of 50% in acute disseminated histoplasmosis. In chronic treatment, however, this relapse rate decreases to 10% to 20%. Death is imminent without treatment.

While illnesses such as pneumonia are more prevalent, it is important to keep in mind that more rare diseases are always possible. Keeping in mind that every infiltrates on chest x-ray or chest CT is not guaranteed to be a simple pneumonia. Key information to remember is that if the patient is not improving under optimal therapy for a condition, the working diagnosis is either wrong or the treatment modality chosen by the physician is wrong and should be adjusted. When this occurs, it is essential to collect a more detailed history and to refer the patient for appropriate consultation with a pulmonologist or infectious disease specialist. Doing so, in this case, yielded workup with bronchoalveolar lavage and microscopic evaluation. Microscopy is invaluable for definitively diagnosing a pulmonary consolidation as exemplified here where the results showed small, budding, intracellular yeast in tissue sized 2 to 5 microns that were readily apparent on hematoxylin and eosin staining and minimal, normal flora bacterial growth. 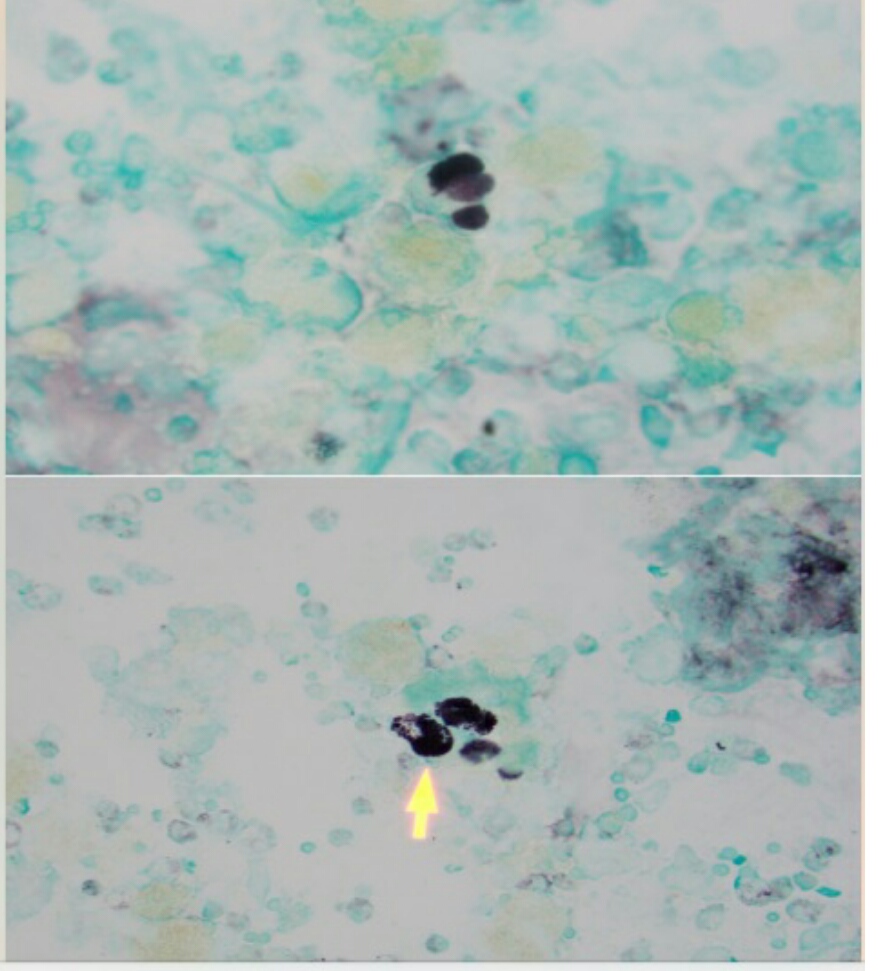