In the United States, obesity has been increasing at an alarming rate over the past 50 years. In 2014, obesity and its comorbidities accounted for 14.3 percent of this country's healthcare expenditure. Weight loss surgery is considered a safe and durable treatment option for obesity. The techniques have been continuously evolving to yield better outcomes. This activity describes the indications, contraindications, and complications associated with sleeve gastrectomy and highlights the role of the interprofessional team in the management of patients with obesity

Obesity in the United States has been increasing at an alarming rate in the past 50 years, and presently over 98.7 million US residents are affected. In 2014, obesity and its related co-morbidities accounted for 14.3% of U.S. heal care expenditure.[1] Weight loss surgery is considered a safe and durable treatment option for obesity. The applied techniques have been continually evolving and yielding better outcomes.

In order to understand and perform a sleeve gastrectomy, you must understand the anatomy of the stomach, its surrounding structures, and the vast bloody supply from the superior mesenteric artery and celiac trunk.

The stomach is a muscular tube that begins at the diaphragmatic hiatus, the lower esophageal sphincter, and ends as it continues as the 1st portion of the duodenum. It is divided into the cardia (just distal to GE junction), fundus (abutting the left diaphragm), body, antrum, and pylorus (most distal portion entering the duodenum.) The lesser curvature lies beneath the medial segments of the liver and includes the incisura angularis which can be identified as the junction of the vertical and horizontal axes of the lesser curvature (marks the transition of the body to antrum).  The greater curvature is the long left lateral border of the stomach from the fundus to the pylorus which is connected to the greater omentum. The left border of the intraabdominal esophagus and the fundus meet at an acute angle termed the “angle of His.” Posterior to the stomach lies the lesser sac which is a potential space anterior to the pancreas and bordered by the splenic artery, spleen, left kidney, and transverse mesocolon.

gastrocolic ligament - inferior stomach to the transverse colon, considered part of the greater omentum and contained the gastroepiploic vessels

The indications for sleeve gastrectomy are mainly for bariatric procedures.  The classic criteria for a patient to be a candidate for any bariatric surgery are: [4]

4) no medical contraindication to surgery

Recent updates have included patients with a BMI of 30-35 with uncontrollable type 2 diabetes or metabolic syndrome as an indication for a laparoscopic sleeve gastrectomy.[5]

Absolute contraindications include the inability to tolerate general anesthesia, uncontrollable coagulopathy, and a severe psychiatric illness.

For bariatric surgery, the patient is required to be evaluated by an interprofessional team before being a surgical candidate. This includes a nutritionist, a psychiatric specialist, a surgical team, and a primary care physician.

For the operative portion, the following personnel is required; an anesthesiologist, experienced metabolic surgeon, scrub nurse, and first assistant.

Preoperatively all patients should receive upper endoscopy. There is increasing evidence for the use of an “ultra-low” preoperative carbohydrate diet to shrink the liver allowing for better exposure and favorable outcomes.[7]

The patient will be given preoperative antibiotics 30 minutes prior to incision as well as VTE prophylaxis.  The hair on the abdomen is removed with clippers in the preoperative area. The patient is placed on the operating table and secured in the supine position with the arms extended. After induction of anesthesia, an orogastric tube is positioned within the stomach.

There are many ways to perform a laparoscopic sleeve gastrectomy, and an example is provided below. Different techniques and the data to support them will also be discussed in each section.

1) Entrance and set up

Entrance into the abdomen begins in the left upper quadrant and the technique utilized is at the surgeon's discretion. The abdomen is insufflated to a pressure of 15 mmHg, and the abdomen is visually explored with a laparoscope. Trocar placement will be as follows:

2) Mobilization of the greater curvature

Dissection begins by dividing the greater omentum 5 cm proximal to the pylorus near the incisor angularis.  The gastroepiploic vessels are divided using an energy device along the greater curvature toward the short gastric vessels. Division of the short gastric vessels should be done with a bipolar cautery device.  This dissection is continued to completely divide the gastrophrenic ligament and mobilize the angle of His to identify the left crus of the diaphragm.

3) Identification and repair of a hiatal hernia

After exposing the left crura of the diaphragm, one should determine if a hiatal hernia is present.  If so it is recommended to reduce the sac and repair the hernia with crural approximation utilizing interrupted sutures posterior to the esophagus.

The orogastric tube is removed and a 32 to 40 French Bougie is placed under laparoscopic visualization and is directed to a point distal to the divided omental attachments.

6) Creation of a stapled sleeve gastrectomy

A 60mm long endoscopic stapler is used for this. Firing is begun at a point approximately 5 cm proximal to the pylorus along the bougie and with an angle that is parallel to the lesser curvature. One must ensure that the stapler is encompassing equal lengths of the anterior and posterior stomach to avoid “spiraling” of the sleeve. The staple lines are sequentially fired along the bougie toward the angle of His and divide the fundus at a distance of .5 to 2 cm lateral to the esophagus. The remaining cardia will be inverted at the GE junction utilizing interrupted Lembert sutures. The amputated stomach is then removed through the 15mm port.

A flexible endoscope is carefully inserted into the esophagus and the staple line is visualized for integrity and hemostasis. The remaining stomach may be submerged in irrigation fluid and then insufflated with the endoscope to check for a staple line leak.

A fascial closure is done at the 15mm port site and skin closure done at all sites.

Currently, the 30-day morbidity and mortality of laparoscopic sleeve gastrectomy in the literature range from 0-17.5% and 0-1.2% respectively.[16]

As with many operations, complications can be divided into early and late.

The reported incidence is between 1 and 6% postoperatively and can be intraluminal or intraabdominal.[17] Extraluminal bleeding is typically from the staple line, spleen, liver, or abdominal wall. This is treated with reoperation at the surgeon's discretion. For intraluminal bleeding, the patient may present with melena or hematemesis with a concomitant hematocrit drop. This may be treated by endoscopic means and more rarely surgical intervention.

There is some evidence to support reinforcement of the staple line to prevent bleeding. There have been more successful outcomes when comparing buttressing materials as opposed to staple line suture reinforcement.  There is still controversy in this area, and a definitive conclusion has not yet been made.[18]

The incidence of a postoperative leak in laparoscopic sleeve gastrectomy is between 2 and 3%.[19] The cause of the leak in sleeve gastrectomy patients is increased pressure relayed on the staple line in the setting of relative ischemia. This is typically located just below the GE junction where there is relative ischemia due to the dependence on the sacrificed short gastric vessels.  An increase in pressure may be due to a distal narrowing caused by a small-caliber bougie, stricturing, or technical error of firing the stapler too close to the incisura angularis is. There have been mixed results and opinions on whether staple line reinforcement can decrease postoperative leak rate and further studies are needed.  It has been demonstrated that a larger bougie size will decrease the incidence of leaks in sleeve gastrectomy patients.

Patients may be asymptomatic but frequently present with fever, tachycardia, and tachypnea with elevated heart rate being the first sign. The diagnostic test of choice is a CT scan with oral and IV contrast which demonstrates relatively high sensitivity and specificity. An UGI contrast series has a high specificity, but low sensitivity and thus is not recommended as first-line diagnostic imaging.

Leaks should be classified as either acute (<5 days postoperatively) or chronic (>4 weeks postoperatively). In the acute, unstable patient, exploration with drainage of the leak and placement of a distal feeding tube is the management of choice.  In chronic patients, operative management is less successful. If they are unstable, the patient will require an operation as described for an acute leak. For a chronic leak/fistula in a stable patient, treatment is conservative utilizing drainage of abscess if present, antibiotics, NPO, TPN, and endoluminal stenting.  Most chronic fistulae/leaks will close within the range of 4 weeks to 3 months.[20]

This complication has an incidence of up to 4 percent and may present acutely secondary to edema or more often chronically. The common symptoms are dysphagia, nausea, and vomiting and the most common location is at the incisura angularis. In the acute setting, this is likely secondary to edema or kinking due to technical issues.  The diagnostic image of choice is an UGI contrast study.  Treatment of the acute stricture is conservative and only requires surgery in the setting of nonresolution.  Patients who present with chronic strictures should undergo endoscopic balloon dilations and may require multiple interventions for long-term improvement.  Failure of endoscopic management will require surgical intervention with either a laparoscopic seromyotomy or conversion to a gastric bypass procedure.[21]

Severe GERD is a relative contraindication to sleeve gastrectomy.  There have been conflicting results in the literature, but many have advocated the development or worsening of reflux symptoms.  First-line therapy is PPIs, but if the patient has severe symptoms and is refractory to medical treatment, they may require conversion to a Roux-en-Y gastric bypass.[22]

All bariatric procedures harbor nutrient deficiencies and are largely prevented by routine testing and daily supplementation. There is data to show a decreased incidence of nutrient deficiency when compared to gastric bypass patients with the exception of folate.[22]

Management of obesity is with an interprofessional team to get the ideal results. Even though there are several types of bariatric procedures for weight loss, the key is patient education on the prevention of obesity. All healthcare workers including nurse practitioners should educate the patient on a healthy diet, regular exercise, and maintaining a healthy weight. These preventive measures do work as long as the patient is compliant. More important these measures are virtually devoid of risks. Bariatric surgery does not cure obesity and the results are not always guaranteed. However, for those who do manage to lose weight with surgery, there is an added benefit of better glucose control, lowering of blood pressure and lipids. (Level II) 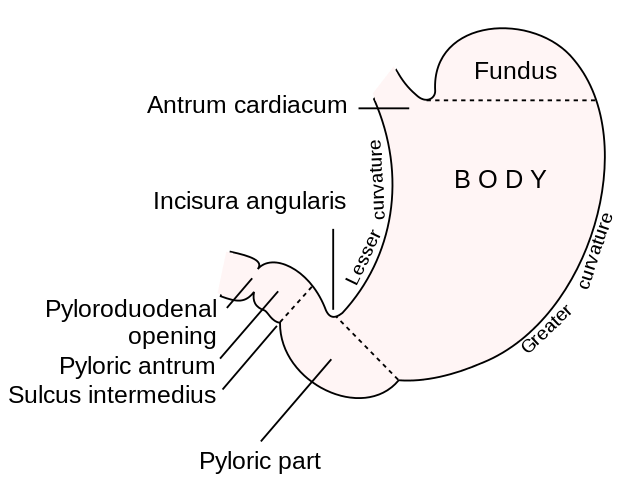 Gross anatomy of the stomach
Contributed From the Public Domain, Original Illustration by Henry Vandyke Carve (1831-1897)

Topart P,Becouarn G,Ritz P, Should biliopancreatic diversion with duodenal switch be done as single-stage procedure in patients with BMI > or = 50 kg/m2? Surgery for obesity and related diseases : official journal of the American Society for Bariatric Surgery. 2010 Jan-Feb     [PubMed PMID: 19640795]

Choban PS,Jackson B,Poplawski S,Bistolarides P, Bariatric surgery for morbid obesity: why, who, when, how, where, and then what? Cleveland Clinic journal of medicine. 2002 Nov     [PubMed PMID: 12430975]