The deep petrosal nerve is a branch from the internal carotid plexus.[1] The plexus is located on the lateral side of the internal carotid as it courses superiorly. The deep petrosal enters the skull through the carotid canal with the internal carotid artery.[1] Without passing completely through the carotid canal, the deep petrosal travels perpendicular to the canal in another bony canal called foramen lacerum. The foramen lacerum is closed with cartilaginous substance superficially. The location of this foramen is between the body of sphenoid where the greater wing of the sphenoid and pterygoid plate meets anteriorly, petrous temporal bone laterally, and basilar occipital bone medially.[1]

The deep petrosal nerve carries postganglionic sympathetic nerve fibers that originated in the intermediate gray horn of the spinal cord, traveled through the sympathetic chain, then synapsed in the superior cervical ganglion. After synapse, the nerve fibers traveled in the carotid plexus eventually to form the deep petrosal nerve.[1] These postganglionic sympathetic nerve fibers carry sympathetic innervation to the blood vessels and secretomotor elements of the lacrimal gland, nasal region, and oral cavity.[1] The nerve fibers run on the zygomatic nerve to their destinations.[1]  Because the nerve fibers that supply the blood vessels of the lacrimal gland are sympathetic in origin, they have vasoconstrictive properties.[6] By vasoconstriction, these fibers may be responsible for decreased lacrimation, as vasodilation increases lacrimation.[7]

The deep petrosal nerve is supplied by the internal carotid and the artery of the pterygoid canal, which is a branch of the maxillary artery.[1]

In some patients, the pterygoid canal superior to the level of the anterior genu of the petrous internal carotid artery. This variant is significant for surgeons who normally take an inferior medial approach for pterygoid canal and vidian nerve procedures.[10]

Cluster headaches can involve both the parasympathetic and sympathetic fibers from the greater petrosal and deep petrosal, respectively. A cluster headache can involve both sides of the autonomic system, sympathetic and parasympathetic.[1]  There can be excessive lacrimation, congestion, rhinorrhea, and in rare cases, miosis. These symptoms are thought to be associated with the pterygopalatine ganglion, which contains both types of these autonomic nerve fibers.[1]

The deep petrosal can be damaged at several different parts either traumatically or iatrogenically. Trauma to the skull can injure the nerve at various points depending on where the trauma occurs. Trauma to the neck and carotid can also damage the sympathetic plexus before it forms the deep petrosal nerve. Iatrogenic injuries include those to the carotid plexus from a neck surgery such as dissection, those that may occur during sphenoidal surgery, and vidian neurectomy.[11] Vidian neurectomy is a procedure to remove the vidian nerve in an effort to decrease vasomotor rhinitis, allergic rhinitis, crocodile tears syndrome, cluster headaches, and nasal polyps. It can interrupt the sympathetic fibers from the deep petrosal.[11] 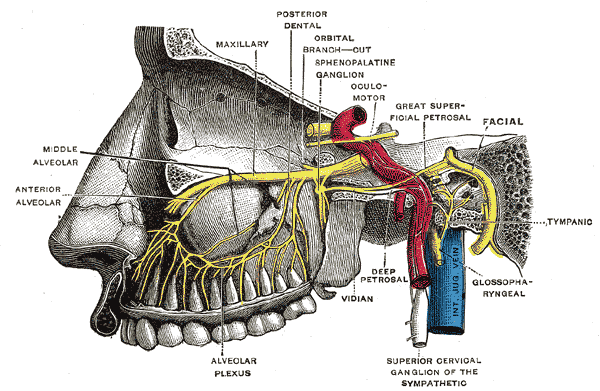 Depiction of the pterygopalatine ganglion, including the deep petrosal nerve and vidian nerve.
Gray's Anatomy Plate 779

Rusu MC,Pop F, The anatomy of the sympathetic pathway through the pterygopalatine fossa in humans. Annals of anatomy = Anatomischer Anzeiger : official organ of the Anatomische Gesellschaft. 2010 Feb 20     [PubMed PMID: 19939656]