Traditionally, carotid endarterectomy (CEA) has been the primary method of treating high-grade asymptomatic and symptomatic carotid artery stenosis. A carotid endarterectomy involves exposure of the carotid artery and removal of plaque, most typically from the carotid bulb and the proximal internal carotid artery, via a neck incision. However, in vascular surgery, as in many other surgical specialties, minimally invasive techniques have evolved over the years. These techniques offer the advantages of smaller incisions, reduced postoperative pain, reduced potential for postoperative wound complications, and a shorter length of stay in the hospital. Carotid artery stenting (CAS) is one such technique, which can be performed via a transfemoral approach or a transcarotid approach.[1][2][3]

CAS is a reasonable alternative to CEA in select patients with high-grade asymptomatic (more than 70%) or symptomatic carotid artery stenosis. Indications for CAS include high surgical patient risk, such as severe pulmonary disease, recent myocardial infarction, unstable angina, or severe congestive heart failure; a history of prior neck radiation that is anticipated to make open surgical dissection difficult; a history of damage to contralateral vocal cords; the presence of a tracheostomy, contralateral carotid occlusion; and previous CEA with recurrent stenosis.[4][5][6][7]

The main contraindication to CAS via a transfemoral approach is unfavorable aortic arch anatomy. This can include a heavily calcified aortic arch or a type 3 aortic arch. A relative contraindication can be a history of severe allergic reaction to intravenous contrast dye. However, patients can be pre-medicated to mitigate some of this risk. For a transcarotid approach, a common carotid artery length of less than 5 cm from the clavicle is considered inadequate.

An ultrasound unit, a fluoroscopic imaging system (such as a C-arm), lead shielding, sterile drapes, heparinized saline, and heparin is required for both types of approaches. An ACT machine should be available to ensure that the ACT after heparinization is greater than 250 seconds.

The transcarotid approach requires the following:

Regardless of the approach, patients should be closely monitored during the procedure. As with CEA, CAS can cause dramatic changes in the patient’s hemodynamics, leading to hypotension or bradycardia. Anesthesia personnel should have vasoactive medications available to treat such hemodynamically significant changes. It is also prudent to have an arterial line in place for invasive hemodynamic monitoring during the procedure. Patients should be on aspirin and Plavix preoperatively, and these should be continued in the postoperative period. All patients should be asked about aspirin and Plavix use in the preoperative holding area.

For the transfemoral approach, the patient should be supine and the neck should be turned to the opposite side. For the transcarotid approach, the patient should be supine with a shoulder roll placed underneath the shoulders and the neck turned to the opposite side. Full sterile precautions should be maintained throughout the procedure as with any invasive procedure. If the transfemoral approach is being used, both groins should be prepped and draped in the usual sterile fashion.

For the transcarotid approach, the neck should be prepped and draped in addition to the groins. Arms can be tucked for both approaches.

Transfemoral approach: This technique is believed to provide better maneuverability. However, it can be limited by aortic arch anatomy and calcifications. Under ultrasound guidance, the common femoral artery is accessed percutaneously using the micropuncture kit using the Seldinger technique. A femoral angiogram is recommended at this time to identify proper anatomic entry into the common femoral artery and to assess suitability for use of a vascular access closure device at the conclusion of the procedure. A short 6 Fr sheath is then placed over a 0.035 in the wire. The wire is advanced into the aortic arch carefully. Using an angled catheter and a left anterior oblique projection on the fluoroscopic system, the common carotid artery is selectively cannulated and mapped. The guide wire is then advanced into the external carotid artery followed by advancement of the catheter into the external carotid artery. Over a stiffer wire, a shuttle sheath is advanced into the common carotid artery. Dedicated carotid arteriograms are performed in multiple views to identify the lesion. A 0.014 in wire should be used to traverse the lesion followed by placement of embolic protection device. Pre-dilation of the lesion is performed using a small profile balloon. Careful attention should be paid to the patient’s hemodynamics during this maneuver and subsequently. After pre-dilation, an appropriately sized stent is deployed. If significant residual stenosis exists after the deployment of the stent (greater than 30 percent), balloon angioplasty can be performed to rectify this.  Completion carotid and a cerebral angiogram is performed, followed by the removal of catheters and sheaths if the result is satisfactory. A closure device is then used to close the arteriotomy site in the common femoral artery.

For the transfemoral approach, complications can occur related to femoral artery access. These include bleeding, perforation, dissection, thrombosis, and distal embolization. Procedural complications from either approach include carotid artery dissection or embolization. The stent may not deploy properly and can be associated with fracture.

There have been multiple studies comparing CAS with CEA in both symptomatic and asymptomatic patients. The risk of myocardial ischemia appears to be higher with CEA, while the risk of a cerebrovascular accident (CVA) appears to be higher with CAS. Restenosis rates appear to be similar between CEA and CAS after two years. CAS, as a procedure, appears to have worse outcomes in patients aged 70 years and over and in patients with a high burden of white-matter lesions on brain imaging. Therefore, patient selection is important for CAS. The transcarotid approach of CAS potentially reduces the risk of embolization in case of a hostile aortic arch. More experience with this technique is being gained in ongoing trials. Hospitalization and long-term costs of CAS and CEA appear similar. [8][9][10]

Carotid artery disease is often encountered by the primary care provider, nurse practitioner and the internist. Because the disorder can lead to a stroke, it is important to refer these patients to a vascular surgeon or an interventional radiologist. Both the open procedure and stenting are viable options for patients with carotid artery disease. Once treated, these patients need to be educated on prevention of atherosclerosis by changing lifestyle, reducing body weight, lowering cholesterol and participating in exercise. 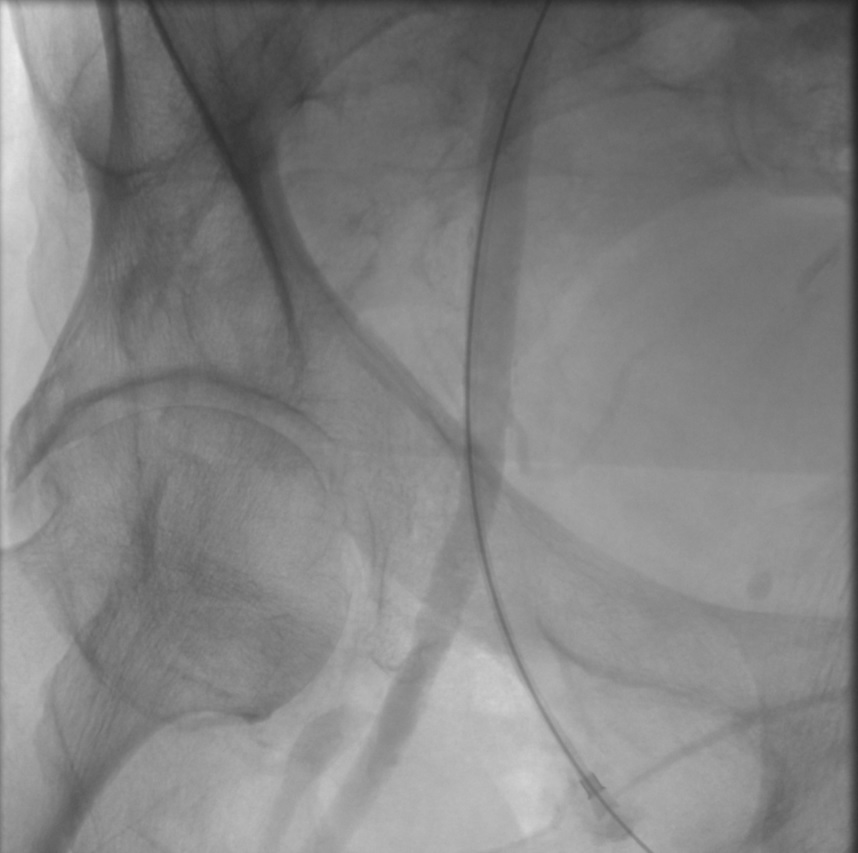 Access into Right Common Femoral Artery using micropuncture system during transfemoral carotid artery stenting. This angiogram shows adequate entry into the artery below the most superior aspect of the femoral head - a useful fluoroscopic landmark. There is no dissection in the artery.
Contributed by Taimur Saleem, MD