Extraocular muscles are crucial for ocular movement. The four rectus muscles, superior oblique, and inferior oblique work in conjunction to move the eyes in every direction. The inferior oblique muscle is primarily responsible for external rotation. The secondary and tertiary actions are elevation and abduction, respectively.[1]

Because of their course, the superior and inferior oblique muscles are the only muscles that can depress or elevate the eye, respectively when the eye moves in adduction.

The inferior division of the oculomotor nerve also carries parasympathetic fibers along the optic nerve to the ciliary ganglion. These fibers innervate the sphincter pupillae and ciliary muscles.[2][7]

Though rare, anatomical variations of extraocular muscles include absence or duplication of muscles and anomalies of innervation or insertions.[4] These variations can cause extraocular movement dysfunction and may require surgical evaluation.

The inferior oblique muscle externally rotates, elevates, and abducts the eye. Any injury to this muscle may result in strabismus, which can be a noticeable extraocular defect. Though the patient may find ways to compensate for the extraocular movement disability, cosmetic repair requires surgical intervention.

A myectomy is conducted when a patient presents with vertical hypertropia, without dissociated vertical deviation. Patients with inferior oblique overaction are at increased risk for retinal holes and tears. Hence a myectomy is both a prophylactic measure in addition to a cosmetic correction. In inferior oblique overaction, the muscle pulls on the thin sclera and is more likely to form a tear or hole in the retina.[10]

The inferior oblique muscle is transected and often used to provide traction to the globe during enucleation (see figure).

Diagnosis of inferior oblique dysfunction is often discovered by parents and pediatricians, allowing an early referral to an ophthalmologist. In the early stages, patching the dominant eye can force the eye with the injury to compensate and strengthen. However, later on, the patching technique may not be successful, and surgical intervention is the recommended option.

In lower blepharoplasty resection, the inferior oblique muscle is susceptible to injury. Patients will present with symptoms ranging from transient diplopia to permanent strabismus.[13] Diplopia resulting from an inferior oblique injury usually presents as a distorted visual image with upward lateral gaze. Patients often unknowingly compensate by tilting their head or lifting their chin.[13] 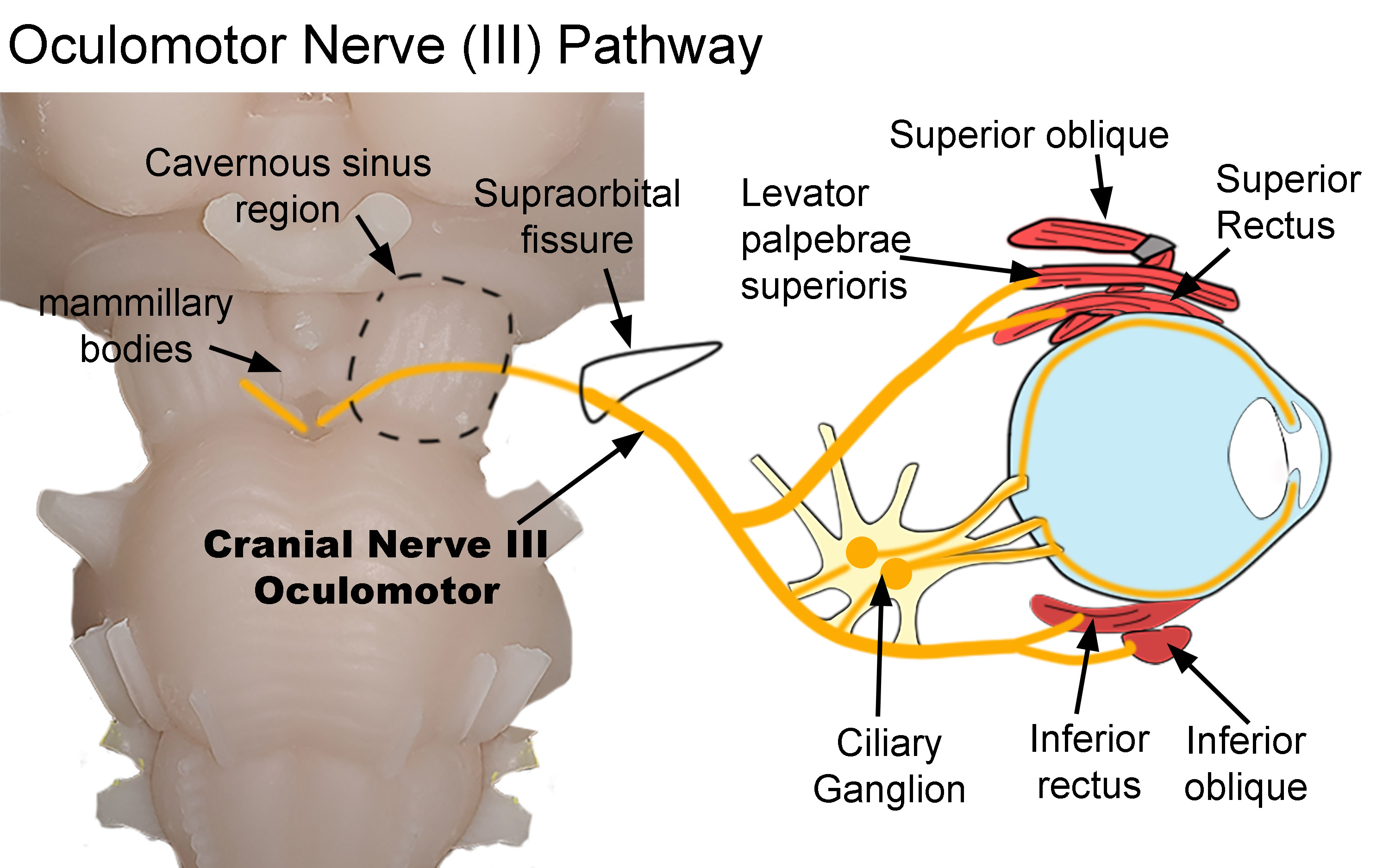 Pathway of the Oculomotor Nerve (III). Diagram shows the pathway of the oculomotor nerve as it exits the brainstem and terminates within the orbit. After exiting the brainstem, it traverses both the cavernous sinus (dotted line) and supraorbital fissure (black line) before entering the orbit. Parasympathetic nerves synapse within the ciliary ganglion. Postganglionic nerves then innervate the sphincter papillae and ciliary muscles. Somatic nerves innervate the superior oblique, levator palpebrae superioris, superior rectus, inferior rectus, and inferior oblique muscles.
Created by Diana Peterson, Ph.D. for use with StatPearls. 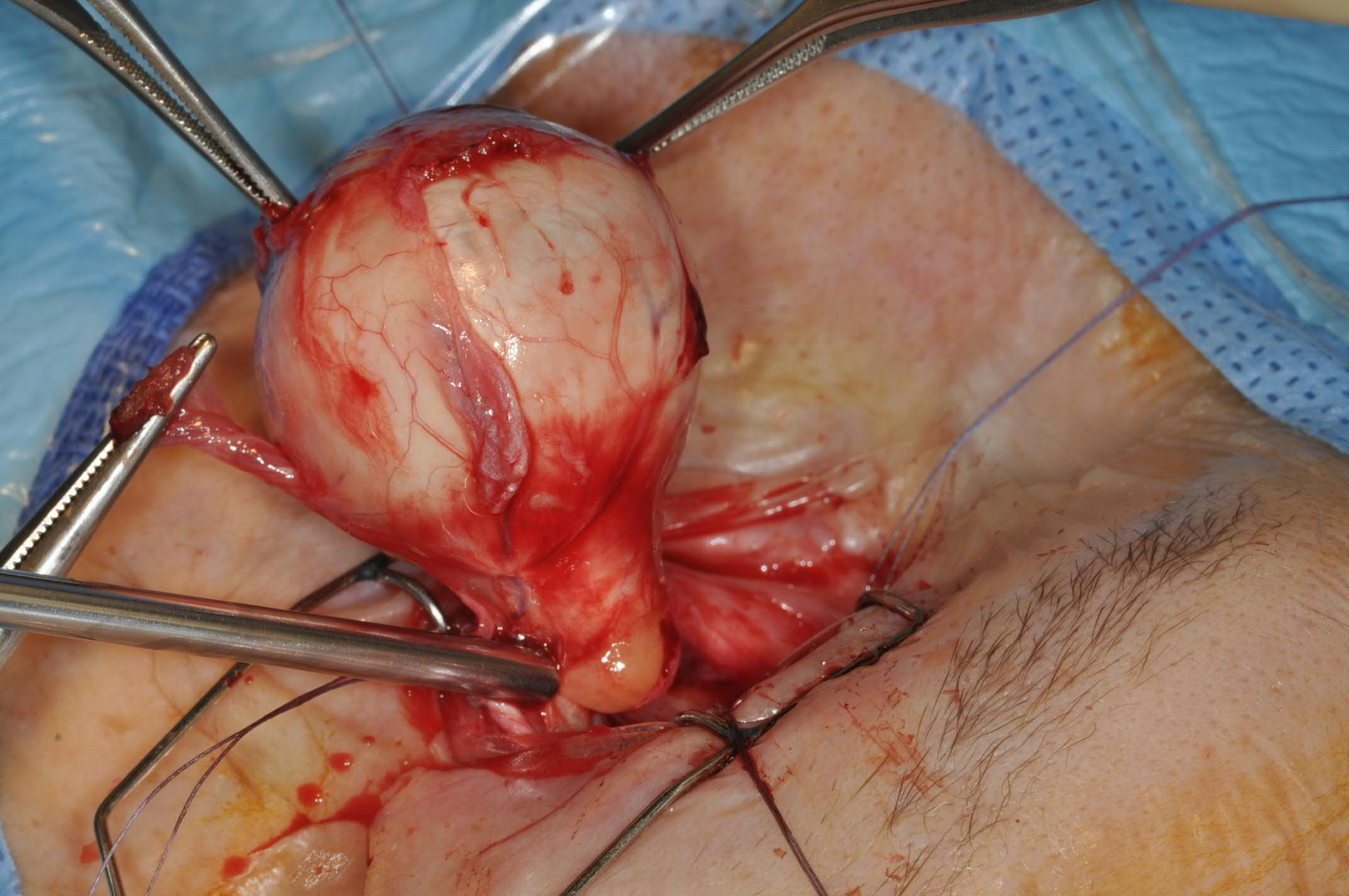 The inferior oblique muscle as seen during enucleation of the eye. The muscle may be used to provide traction to the globe aiding the surgeon when cutting the optic nerve.
Contributed by Prof. Bhupendra C.K. Patel MD, FRCS

Stager DR, The neurofibrovascular bundle of the inferior oblique muscle as its ancillary origin. Transactions of the American Ophthalmological Society. 1996;     [PubMed PMID: 8981719]