The conjunctiva of the eye consists of an epithelial layer composed of stratified squamous and stratified columnar epithelium. It is non-keratinized with interspersed goblet cells. There are also present within this epithelial layer blood vessels, fibrous tissue, lymphatic channels, melanocytes, T- and B-cell lymphocytes, Langerhans cells, and accessory lacrimal glands. A deeper layer, the substantia propria or conjunctival submucosa, consists of superficial lymphoid and fibrous tissue. The substantia propria is a tissue layer that only exists in the conjunctiva, but not in other eye tissues. Numerous lymphocytes, mast cells, plasma cells, and neutrophils are present within this connective tissue layer. Finally, the deepest fibrous layer contains the nerves and vessels providing innervation and blood supply to the conjunctiva. Also located within this deep layer are the glands of Krause. [1][2]

There are no muscles that originate or insert directly into the conjunctiva. Instead, some muscles interact with parts of the eye near the conjunctiva. For example, the layers of the eyelid from superficial to deep include the skin, orbicularis oculi muscle, the tarsus, and then the palpebral conjunctiva. The extraocular muscles of the eye, such as the four rectus muscles (superior, inferior, medial, and lateral recti), insert on the globe at various distances, posterior to the limbus. These muscle insertions lie deep to the bulbar conjunctiva.

Conjunctivochalasis refers to redundant conjunctiva, typically involving the inferotemporal conjunctiva. This can be asymptomatic in some individuals. It is a normal physiologic variant with incidence increasing with age. However, the redundant conjunctiva can be associated with symptoms of dry eye syndrome. Some postulate that normal tear meniscus formation is impaired and that normal tear movement is blocked. Nevertheless, no definitive pathologic mechanism has been discovered for this association. [8][9]

There are many routine procedures that involve the conjunctiva. In conjunctivochalasis, described above, the conjunctiva is grasped with forceps and thermocautery is used to cause contraction of the redundant tissue.[10]

The conjunctiva can be assessed clinically using common stains at the slit-lamp by a trained ophthalmologist. A small amount of fluorescein dye is applied to the ocular surface, and light with a blue filter is used to detect areas of increased stain uptake, indicative of damaged epithelium. Lissamine green and Rose Bengal can also be used to stain the ocular surface with appropriate absorption filters. While both Lissamine green and Rose Bengal have similar staining characteristics, Lissamine green is better tolerated by patients and is thus more frequently used in the clinical setting. Various methods exist for grading abnormalities, including the Oxford grading scale and the National Eye Institute (NEI) scales. Both of these scales are developed for grading the conjunctiva and the cornea.[11][12] 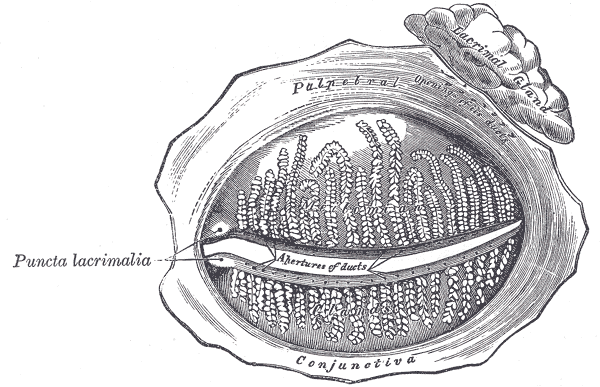 Ruskell GL, Innervation of the conjunctiva. Transactions of the ophthalmological societies of the United Kingdom. 1985     [PubMed PMID: 3862271]