The pulmonary exam includes multiple components, including inspection, palpation, percussion, and auscultation.  In this article, we will focus on auscultation of lung sounds, which are useful in predicting chest pathology when considered alongside the clinical context. The lungs produce three categories of sounds that clinicians appreciate during auscultation:  breath sounds, adventitious sounds, and vocal resonance.

For the purpose of this article, we refer to breath sounds as the normal lung sounds heard through the chest wall with the use of a stethoscope, rather than audible breathing through the mouth. Normal breath sounds are classified as bronchial, vesicular, or bronchovesicular, which have different acoustic properties based on anatomical characteristics of the location where you are auscultating.  Bronchial sounds (also called tubular sounds) normally arise from the tracheobronchial tree and vesicular sounds normally arise from the finer lung parenchyma. Loud, harsh, and high pitched bronchial sounds are typically heard over the trachea or at the right apex.  They are predominantly heard during expiration.  If heard in other areas of the lung, bronchial sounds are abnormal. In contrast, vesicular breath sounds are soft, low pitched, predominantly inspiratory, and appreciated especially well at the posterior lung bases. Bronchovesicular sounds can be heard during inspiration and expiration and have a mid-range pitch and intensity.  They are commonly heard over the upper third of the anterior chest. Note that the terms high and low pitch are defined by the American Thoracic Society Committee as 400hz or greater and 200hz or less, respectively, although the actual frequencies of these sounds may violate that official rule.[1][2]

The intensity and duration of breath sounds is also clinically significant and will be covered in detail below.

Adventitious sounds refer to sounds that are heard in addition to the expected breath sounds mentioned above. The most commonly heard adventitious sounds include crackles, rhonchi, and wheezes.  Stridor and rubs will also be discussed here.  There are many other terms that are used to describe adventitious sounds, which are too numerous to cover. These terms are generally redundant with, or sub-categories of, the ones noted below.  For instance, crackles and rales refer to the same finding; many terms are used interchangeably and vary by the clinician and geographic location of the practice.

The first trait that assists in the classification of adventitious sounds is whether the sounds are continuous or intermittent.  For example, rhonchi and wheezes are continuous sounds whereas crackles are not. Crackles could be counted by the examiner as discrete acoustic events [<25ms, interrupted, like dropping a marble on the floor], whereas rhonchi and wheezes are somewhat inseparable noise [>250ms, constant, like the whirring of a fan].  The next thing to note is the pitch:  wheezes and fine crackles are high pitched, whereas rhonchi and coarse crackles are low pitched.

Crackles are generated by small airways snapping open on inspiration.[2]  Therefore, they are predominantly inspiratory. The difference between the course and fine crackles is believed to come from the size of the airway snapping open (larger airways, deeper pitched, courser crackles).  Some have compared to separating hook-and-loop fasteners (e.g., velcro).

Wheezes and rhonchi, which have the same pathology and are separated only by pitch, are produced by the fluttering of narrowed airways and the air that flows through them.[3]  Wheezes are musical sounds caused by air movement through constricted small airways, such as bronchioles. Rhonchi are coarse, loud sounds caused by constricted larger airways, including the tracheobronchial passages. These sounds occur during expiration, or both inspiration and expiration, but they do not occur in inspiration alone.   Interestingly, physicians often agree on auscultation of wheezing, but less so for other findings, such as crackles.[4]

Stridor is a high-pitched sound originating from the upper airway and occurring on inspiration.  It is distinguished from other sounds by its intensity in the neck more so than the chest, timing (inspiratory), and pitch (high).  Like wheezes, stridor is produced by airway narrowing, but only in the upper airways.

A rub is a grating sound coming from inflamed pleura rubbing against one another.  It is usually louder than other lung sounds due to its generation closer to the chest wall. Rubs usually occur during both inspiration and expiration at a mirrored point in the respiratory cycle.[5]  Rubs are most often confused with crackles but are distinguished by the rub's biphasic, localized quality, often with overlying point pain on the chest wall.

Normal lung tissue acts as a low-pass filter in that it allows low-frequency sounds to move through easily while filtering high-frequency sounds.  Pathological lung tissue can transmit higher frequency sounds more efficiently; this occurs when a normally air-filled lung becomes occupied by another material, such as fluid.  Physicians can exploit this phenomenon through the physical exam.[2] Tests used to detect this phenomenon, known as vocal resonance, include bronchophony, egophony, and whispered pectoriloquy.  To test for these, the clinician places their stethoscope over symmetric areas of the patient’s chest and asks the patient to speak. The clinician usually would hear an unintelligible, distant, and muffled vocal sound.  In bronchophony, the voice appears closer and louder. Egophony occurs when pathological lung tissue distorts vowel sounds and makes them more nasal in quality, and therefore makes the sound of a hard E heard as an A, referred to as “E to A changes.”[6] Pectoriloquy describes the finding of a clear and intelligible sound when the patient whispers; it usually is unclear and unintelligible.

The performance of auscultation and interpretation of lung sounds is most familiar with a traditional stethoscope; however, newer, electronic stethoscopes may increase detection of abnormal lung sounds. Computerized interpretation of lung sounds is also actively under investigation; this could take the form of digitized analysis of sounds or of a visual display of the acoustic information that a clinician could interpret.  Computerized augmentation may prove to be more accurate in the future.[7]

Adventitious sounds reflect the pathology that produces them, so the specific clinical context is critical for accurate interpretation.  For example, crackles, the sound of airways snapping open, frequently occur in interstitial lung disease, pulmonary edema from heart failure, and infection.  Later and higher pitched crackles often represent interstitial lung disease whereas earlier and lower pitched crackles tend more towards chronic obstructive lung disease.    Wheezing, the sound of air movement through narrowed airways, occurs in conditions such as asthma, chronic obstructive lung disease, and focal masses. Without a specific clinical context, these sounds are fairly nonspecific. The duration, rather than pitch, of wheezing throughout the respiratory cycle is most predictive of the degree of pathology.[1]

If bronchial breath sounds are outside their normal geographic territory on the chest, this is a sign of underlying pathology, usually pulmonary consolidation or collapse, this can be a tricky concept because normal breath sounds in one area of the lung could be pathological if heard elsewhere in the lung so the examiner should be conscientious when examining the chest.

The ease of transmission of certain frequency sounds can change with pathology, so we will discuss two specific examples as an illustration.  In patients with lobar pneumonia, the normal, air-filled lung instead contains fluid.  As fluid transmits sounds better than air, vocal resonance is increased such that bronchophony, egophony, and whispered pectoriloquy might be present. Contrast this with pleural effusions which may transmit lower frequency sounds less, but higher frequencies better.[8][9][10] Note that these findings can be dynamic and inconsistent, with decreases in vocal resonance sometimes occurring if enough fluid builds up between the stethoscope and the lung.  When assessing vocal resonance, the examiner should compare sounds from the opposite side as well as different locations throughout the lungs.  Even healthy lungs will distort transmitted sound, but a unilateral change in an isolated area often indicates pathology. 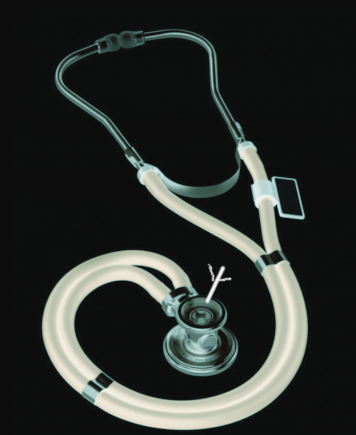 Andrès E,Gass R,Charloux A,Brandt C,Hentzler A, Respiratory sound analysis in the era of evidence-based medicine and the world of medicine 2.0. Journal of medicine and life. 2018 Apr-Jun     [PubMed PMID: 30140315]