The corrugator supercilii muscles receive blood supply from the supraorbital and supratrochlear arteries of the ophthalmic artery, which is a branch of the internal carotid artery.[5]

The corrugator supercilii muscles consist of two heads. The transverse head arises from the superomedial margin of the orbital rim and inserts into the dermis at the middle third of the brow and interdigitates with the orbicularis oculi and frontalis muscles. The smaller oblique head runs parallel to the depressor supercilii after inserting into the medial brow.[3]

The corrugator supercilii muscles work with other muscles of the glabellar complex, including the procerus, depressor supercilii, and the orbicularis oculi muscles, to maintain a balanced brow position and shape.[1]

The lateral margin of the corrugator supercilii muscles may differ among different individuals. In some cases, it may extend to the lateral third of the brow.

Patients with thyroid eye disease with upper eyelid retraction often have overactivity of the accessory muscles that play a role in eyelid closure and the glabellar muscles. They may have a staring facial expression with proptosis, upper lid retraction, and a glabellar frown. [1] The frown may have vertical glabellar furrowing and an altered eyebrow contour, with medial brow ptosis and a deep horizontal line over the nasal bridge. These facial lines mainly originate from a chronic contraction of the corrugator supercilii muscles and the procerus pulling on the skin. Botulinum A chemodenervation has been shown to flatten the glabellar region and enhance the medial eyebrow contour in patients with thyroid eye disease. [1]

Among patients with abnormal Parkinson disease, the “procerus sign” is a clinical sign that is often observed, particularly in patients with progressive supranuclear palsy (PSP). PSP may suffer misdiagnosis as the more well-known Parkinson disease. The procerus sign involves having vertical wrinkles on the forehead and a staring, astonished look with eyelid retraction and infrequent blinking. [11] It is often believed the procerus sign is secondary to dystonia of the procerus muscle. However, the term may be misleading as the corrugator supercilii muscles appear to be the main muscles to produce the frown or vertical creases. [11] Nevertheless, the generation of vertical creases on the forehead is a complex phenomenon, and the procerus sign should be prominent in early PSP. 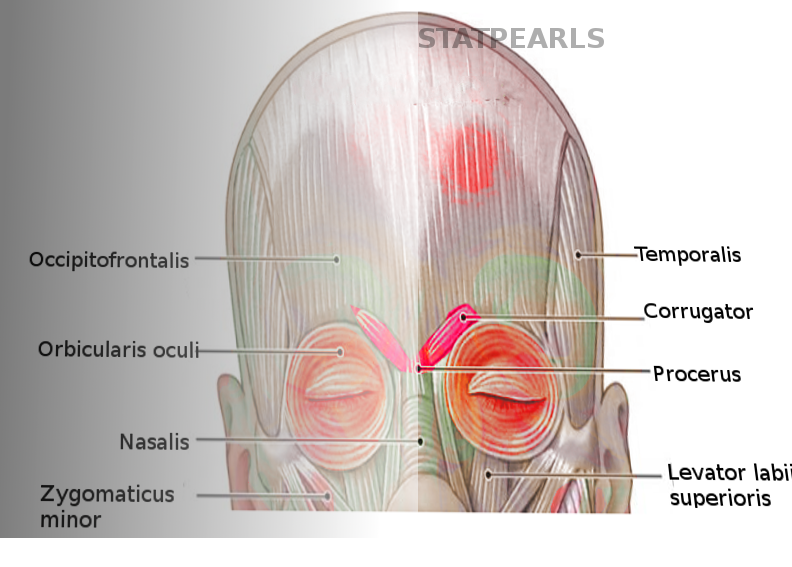