The asterion, derived from the Greek word asterion meaning “starry,” is an anatomical landmark on the human skull.

The asterion is an anatomical landmark on the lateral aspect of the skull formed at the junction of the occipital bone, the temporal bone, and the parietal bone. Its definition can also be a confluence of the lambdoid suture which is the junction of the occipital and parietal bones, the occipitomastoid suture, which is a junction of the occipital and temporal bones, and the parietomastoid suture, which is a junction of the parietal and temporal bones.  It is a visible landmark on the human skull seen when removal of the soft tissue from the bony surfaces has taken place. Asterion is related to the transverse and sigmoid sinus internally. It signifies the site of closed mastoid fontanelle. Asterion corresponds to the posterior end of the parietotemporal suture, the Pterion forming the anterior end. It is used as a surface landmark for the radiological and anthropological measurement of the skull. The sutural anatomy of the Asterion is useful in retrosigmoid surgical approaches to the posterior fossa[1]. The location of the asterion has been studied in various population demographics, trying to demonstrate whether it can be used as a reliable landmark for surgical approaches.

Asterion is used only as a referral superficial anatomical landmark for neuronavigation, in addition to imaging modalities. It is more valuable in underdeveloped nations where advanced imaging techniques are not readily available.[2][3]

A study was conducted on one hundred dried skulls to determine the reliability of asterion as a landmark for the intracranial procedure. It was found to be positioned over the posterior fossa dura in only 32% of the right and 25% on the left. In 61% on the right and 66 % on the left, the asterion was located over the transverse or the sigmoid sinus. Thus a burr hole placed at the Asterion may open directly into the sinuses.[4] Retrosigmoid technique is important for tumor resection from the cerebellopontine angle, such as with vestibular schwannoma removal.  A 2007 study sought to provide the best location on the surface anatomy of the skull through which to drill and perform an endoscopic retrosigmoid keyhole approach in the skull base minimally invasive surgery. A burr hole of 2 cm in diameter created at the midpoint between Asterion and the mastoid tip was found to be suitable in exposing structures in the cerebellopontine angle in endoscopic minimally invasive surgery[5] The surgeons can work with both hands using the endoscope and the cannula simultaneously. It was proposed that this approach can improve the maneuverability during minimally invasive retrosigmoid surgery.[6]

A study on one hundred skulls was conducted using a 2 mm drill bit perpendicular to the skull at the asterion. The distance of the Asterion from the Zygomatic process, the suprameatal crest, and the mastoid tip were studied. It was found to be located superficial to transverse sigmoid sinus junction in 87%, inferior in 11%, and superior in 2% of the skulls. The location and anatomical relations of the Asterion might prove beneficial in microvascular trigeminal root decompression and petrosal approaches.[7] The surface and intracranial location of the asterion and anatomical relation with the dural venous sinuses have been studied to help neurosurgeons avoid fatal subdural hematomas while using the burr hole technique in retrosigmoid approaches.[8][9]

The asterion may also play a part in the placement of hearing implants. A study was conducted to find an alternative site for implantation of the floating mass transducer of a bone conduction hearing implant, which is ordinarily implanted on the mastoid. In patients with prior mastoid surgery or anatomical difficulties precluding appropriate placement of the mass transducer, an alternative method should be in place. A retrosigmoid approach was proposed, using pre-operative computed tomography scanning and avoiding the sigmoid sinus by targeting a point approximately 1.9 cm posterior and 1.7 cm inferior to the asterion, and 3.3 cm posterior and 2.1 cm superior to the mastoid notch. ([10])

Asterion meningiomas, although rare, arise at the junction of sigmoid and transverse sinuses, that is the Sinudural angle. Asterion meningiomas can be completely resected without complications. In a study on 7 patients, it was proposed that the non-dominant transverse/sigmoid sinus should be resected during these procedures, whereas more studies are needed to determine whether it is safe to resect a dominant transverse/sigmoid sinus. ([11]). The risk of recurrence usually depends on the extent of resection, such that it avoids venous outflow obstruction leading to significant neurological sequelae. If a meningioma completely obstructs the venous sinus, gross resection of the intravascular portion should be performed. 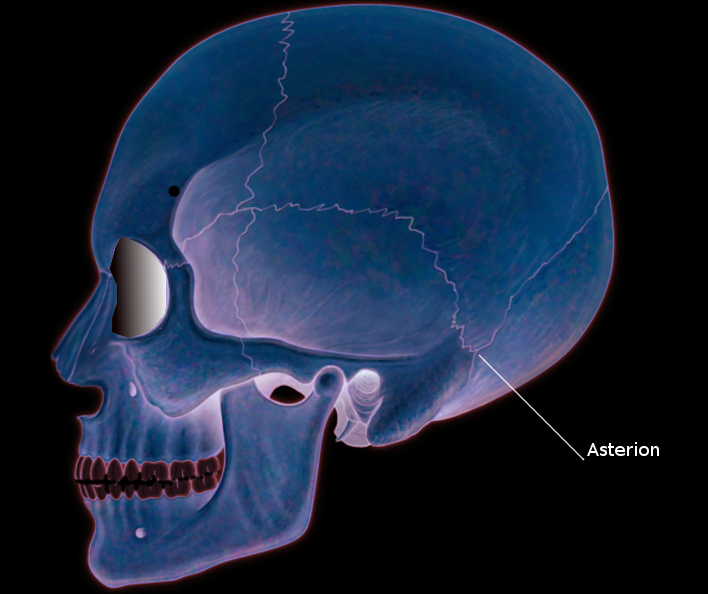