The submandibular triangle is bounded anteriorly by the anterior belly of the digastric muscle and posteriorly by the posterior belly of the digastric muscle.[3] The superior border of the triangle is the inferior border of the mandible. The triangle's floor is formed by the mylohyoid muscle.[3] Odontogenic infections, particularly from wisdom teeth, can spread below the mylohyoid muscle into the submandibular triangle.[3] The hyoid bone borders the triangle inferiorly.

Nerves that course through and around the submandibular triangle are essential surgical landmarks to recognize as resection can lead to numerous adverse outcomes. The most superficial of these nerves include the marginal mandibular branch of the facial nerve superiorly and the cervical branch of the facial nerve inferiorly. Nerves that course deeper in the triangle include the lingual nerve; a division of the mandibular branch of the trigeminal nerve (V3), and the hypoglossal nerve; cranial nerve XII. The mylohyoid muscle is supplied by the mylohyoid nerve from the alveolar branch of V3, which lies on the inferior portion of the muscle.[1][2]

The submandibular triangle is bordered by muscles that delineate its borders along with the inferior border of the body of the mandible. These include the anterior and posterior bellies of the digastric muscle, and the mylohyoid muscle deep. Superficially, the platysma courses across the triangle.[1]

Surgical considerations within the submandibular triangle involve detailed knowledge of the anatomy of the area to avoid post-operative complications. This anatomical understanding should include both the structures contained in, as well as those surrounding structures of the triangle. The most common post-operative complications from excision of both benign and malignant submandibular triangle masses include temporary or permanent marginal mandibular nerve weakness, and hematoma. Resection of other nerves present within the triangle may be necessary depending on the depth of invasion of the neoplasm. This may involve damage to the lingual or hypoglossal nerves.[6][7][8]

Non-infectious, immunologic pathology arising within the submandibular gland include chemical sensitivities and autoimmune disorders. One such chemical sensitivity includes sialadenitis caused by iodide contrast dye. The pathophysiology of iodide-associated sialadenitis is thought to be due to an elevated concentration of salivary iodine, resulting in swelling of the duct mucosa and impairment of salivary excretion. Another cause of non-infectious sialadenitis includes autoimmune immunoglobulin G4-related sialadenitis (IgG4-RS). IgG4-RS typically presents as bilateral inflammation of the submandibular and/or parotid glands with associated xerostomia from a reduced salivary flow. Unlike Sjogren’s syndrome, IgG4-RS occurs more commonly in males that are typically middle-aged and presents serologically with elevated IgG4 and IgE levels. IgG4-RS is progressive and causes fibrosis of the submandibular gland. Diagnostic workup usually consists of imaging with ultrasound or positron emission tomography (PET) and is confirmed with biopsy. The first line of treatment for IgG4-RS involves glucocorticoid therapy. Studies suggest that early intervention with glucocorticoids results in reduced fibrosis and improved clinical outcomes.

Neoplasms that arise in the submandibular triangle can be divided into benign and malignant masses. Evaluation of these masses involves imaging studies with ultrasound, computerized tomography (CT), or magnetic resonance imaging (MRI), followed by fine-needle aspiration biopsy for confirmation. Treatment of all neoplasms requires surgical resection. The degree of surrounding tissue and lymph nodes surgically removed in addition to the mass is case-dependent and is a function of the etiology and aggressiveness of the neoplasm. The most common benign neoplasm seen in the submandibular triangle is a pleomorphic adenoma, followed by adenolymphoma, also known as Warthin’s tumor. The most common malignant neoplasm is adenoid cystic carcinoma, followed by mucoepidermoid carcinoma. Mucoepidermoid carcinoma is statistically the most common overall malignancy of the salivary gland, but the second most common malignancy of the submandibular gland. Both malignant neoplasms are aggressive in nature, and rapid diagnosis followed by surgical excision improves morbidity and mortality. Other benign and malignant neoplasms arising from within the submandibular triangle have been reported but are exceedingly rare in incidence.[1][9][10][11][8] 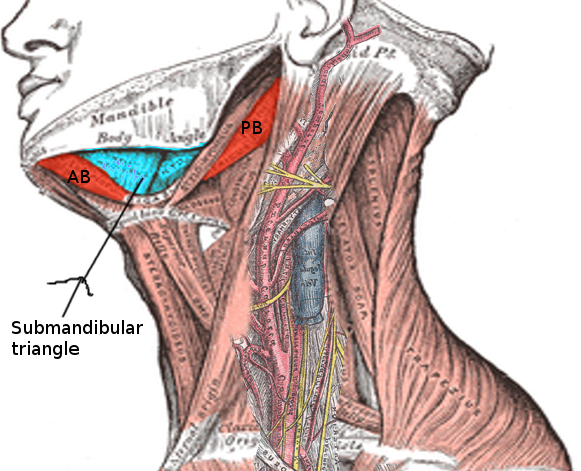 Wenig BL,Applebaum EL, The submandibular triangle in squamous cell carcinoma of the larynx and hypopharynx. The Laryngoscope. 1991 May     [PubMed PMID: 2030631]