The upper limb musculature arises from myoblasts from the dorsolateral somite cells that surround developing bones in the fourth week of development. These cells develop into a mass of tissue that gives rise to the extensor (dorsal) and flexor (ventral) compartments of the limb. The determination of the compartments derives from the connective tissue of the lateral plate mesoderm. Once formed, the primary ventral rami enter the mesenchyme, giving rise to the anterior and posterior divisions. The posterior division innervates the extensor compartment, including nerves such as the radial nerve. A branch of the radial nerve, the deep branch of the radial nerve (C7, C8) eventually arises to supply extensor carpi radialis brevis.

These physiological variants of insertions, origins, and structure are important because the abnormal findings may underlie certain pathologies such as lateral epicondylitis (tennis elbow). Awareness of these anatomic variants by providers is also important during planning and treatment of a patient so that they can adjust their procedures to the modified variants.

Fractures of the distal humerus can affect the extensor carpi radialis brevis (and other forearm extensor muscles) due to its attachment to the lateral epicondyle. Therefore, in patients presenting with distal humerus fractures involving the lateral epicondyle, these muscles must be assessed to ensure there was no ischemia due to interruption of its vascular supply and/or nerve damage.

In patients suffering from lateral epicondylitis, the extensor carpi radialis brevis muscle is the most commonly affected. Therefore, in patients presenting with increased pain or burning on the lateral aspect of the elbow and/or a weak grip strength that worsens with activity, lateral epicondylitis with extensor carpi radialis brevis involvement should be considered.

Wrist drop is a condition that results from palsy of the radial nerve. In cases of compromise of this nerve, the extensor muscles of the wrist and digits are affected., which causes the hand to ‘drop’ or hang in a position of flexion due to the unopposed actions of the extensor muscles. If the injury involves the radial nerve proximal to its bifurcation into the deep and superficial branches along the lateral border of the cubital fossa, then some sensory deficits may also be experienced.[6] 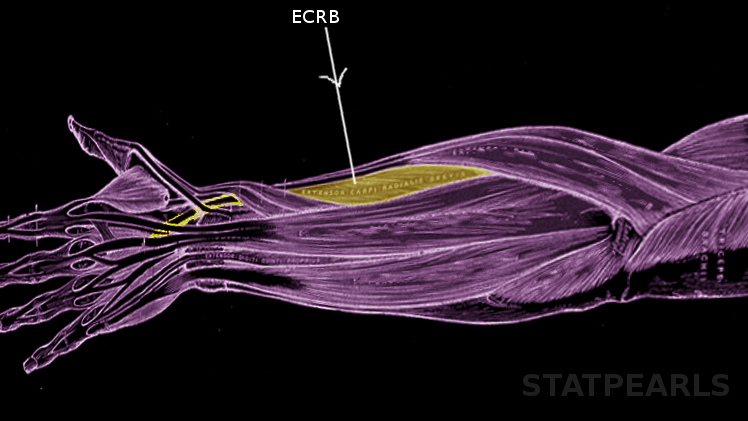