The thoracic aorta subdivides into three sections, the ascending aorta, the aortic arch, and the descending aorta. The ascending thoracic aorta arises from the left ventricle of the heart, anterior to the pulmonary artery, and rises to approximately the level of the fourth thoracic vertebra. The aorta then begins to travel posteriorly and to the left and is known as the arch of the aorta. The normal arch of the aorta gives off three vessels. The brachiocephalic trunk, also known as the innominate artery, is the first branch, and this bifurcates into the right subclavian and right common carotid artery. The brachiocephalic trunk is then followed by the left common carotid and left subclavian arteries. The 'normal' pattern of aortic arch vessels occurs in approximately 70% of the population. Around the level of T4, the aorta continues as the descending thoracic aorta until it reaches the diaphragm.[1][2]

Development of the Thoracic Aorta

The ascending aorta develops as a component of the primitive heart tube. The primitive heart develops from five dilations - the truncus arteriosus, conus cordis, primitive ventricle, primitive atria, and the sinus venosus. The truncus arteriosus forms the basis for the development of the ascending aorta and pulmonary trunk, beginning during the fifth week of development. The truncus starts as a single outflow tract from the right and left ventricles but is eventually divided by the aorticopulmonary septum into separate vascular channels. The truncal and conal ridges are invaded by neural crest cells, leading to spiraling and forming the aorticopulmonary septum.[3]

The aortic arches develop from the aortic sac, with a pair of branches (right and left) traveling within each pharyngeal arch and ending in the dorsal aorta. Initially, the arches arise in symmetrical pairs, but after remodeling, the arches become asymmetric, and several of the arches regress. All six pairs are not present simultaneously; they develop and regress at different stages.

The aortic arch is made up of several layers of cells. The intimal layer consists of endothelial cells, connective fibers under the endothelial cells, and an internal lamina. In the medium tunica, which is the thickest compared to the other arteries of the body, one can find smooth muscle cells and extracellular matrix. Another layer is the adventitia, formed from connective tissue that wraps around the nerves (nervi vascularis) and blood vessels (vasa vasorum). This tract of the artery is essential because it must manage the blood pressure coming from the left ventricle, adapting to the speed of the flow, the direction, and the quantity of the same blood flow (mechanotransduction). The volume of the aortic tissue is isochoric; that is, it is kept constant in its form and histological characteristics if there is a physiological and healthy environment.

In the development and maintenance of the structure of the aortic arch, many molecules take over. For example, in an adult structure, the passage of blood stimulates endothelial cells to express:

During development, many of these molecules play fundamental roles in recruiting cells that will build the aortic arch, such as platelet-derived growth factor B or PDGFB. The latter will activate the receptors on smooth muscle cells and pericytes. These cells will, in turn, produce Ang-1 (angiopoietin-1), which will serve to bind these different cells together through the activation of the endothelial receptor Tie2.[5]

Vessels of the Aorta and their Embryologic Origins - Summary

The first classification of congenital aortic arch anomalies comes from Dr. James Stewart in 1964. There are currently no safe genetic tests to determine whether the aortic arch will form properly or not.

Due to the complexity of the development of the aortic arch, a wide number of congenital abnormalities are possible. Malformations result from the persistence of structures that typically regress or regression of structures that usually persist.[6]

Abnormalities of the Arch Vessels

Common Origin of Brachiocephalic Trunk and Left Common Carotid Artery - Instead of arising from the arch of the aorta as distinct branches, the left common carotid artery and the brachiocephalic trunk both arise from a common origin. In this variant, only two vessels (the common trunk and the left subclavian) branch directly off the arch of the aorta. This arrangement is the second most common branching pattern, following the 'normal' pattern detailed above, occurring in approximately 13% of the population.[7]

Aberrant Right Subclavian Artery (ARSA) -  Occurring in approximately 1% of the population, the right subclavian artery is the final branch arising off the aortic arch, occurring distal to the takeoff of the left subclavian artery. This formation occurs secondary to abnormal regression of the R fourth aortic arch, causing loss of the normal proximal portion of the right subclavian. The artery arises entirely from the right seventh segmental artery, from the dorsal aorta. To reach the right upper extremity, the aberrant artery most commonly (80% of cases) crosses the midline posterior to the esophagus. The other routes are between the trachea and esophagus (15% of cases) and anterior to the trachea (5%). This condition is generally asymptomatic but can cause esophageal compression/dysphagia, stridor, or recurrent laryngeal nerve compression.

Patent Ductus Arteriosus - The ductus arteriosus arises from the dorsal left sixth aortic arch and connects the pulmonary artery to the aorta. This connection is an important aspect of fetal circulation, allowing oxygenated blood to bypass the fluid-filled lungs that do not participate in gas exchange. The ductus arteriosus typically closes in the first three days of life and is termed the ligamentum arteriosum. When the ductus fails to close, it creates a left-to-right shunt due to increased resistance in the systemic circulation as compared to pulmonary circulation. If the defect is large enough, it can lead to pulmonary hypertension and early-onset heart failure. The risk for a persistent ductus arteriosus increases as the birth age decreases. PDA classically presents with a continuous 'machine-like' murmur radiating to the back.[13][14]

Abnormalities of the Arch of the Aorta

Coarctation of the Aorta - An area of stenosis in the aorta, most commonly in the thoracic aorta, but it can also occur in the abdominal aorta. This anatomy occurs in less than 0.1% of the population. Classified into pre-ductal and post-ductal types. Post-ductal lesions are most common and present distally to the ductus arteriosus. Pre-ductal lesions occur less commonly and present proximally to the ductus arteriosus. Traditionally, coarctation classifies as infantile (pre-ductal) and adult (post-ductal), but this classification was abandoned as the age of presentation is more related to the severity of stenosis, as opposed to the location. The most common presentation is differential blood pressures between the upper and lower extremities. Coarctation is repairable with surgical removal of the stenotic segment or transcatheter stenting.[16] There have been reports of coarctation occurring in right-sided aortic arches, as well.[17]

Interrupted Aortic Arch (IAA) - A severe version of coarctation of the aorta, which presents with a complete luminal interruption between the ascending and descending aorta. This malformation is not compatible with life without a patent ductus arteriosus to allow for left ventricular outflow and systemic blood delivery. Interrupted arches get classified by the site of disruption, with type A occurring distal to the left subclavian (13% of cases), type B between the left subclavian and left common carotid (84% of cases), and type C occurring proximal to the left common carotid artery. IAA most commonly presents in infancy due to absent blood flow to the extremities. PGE1 is necessary to maintain a patent ductus arteriosus, and this will subsequently require surgical repair.[18]

Right-Sided Aortic Arch - An uncommon anomaly (presenting in less than 0.1% of the population) where the aortic arch traverses the right bronchus instead of the left bronchus. This condition occurs due to the persistence of the right dorsal aorta with the regression of the left dorsal aorta. The most common presentation (approximately 60%) is the 'mirror-type,' with a right-sided arch and a left brachiocephalic trunk, right common carotid, and right subclavian arteries. The 'mirror-type' is strongly associated with other congenital heart defects. The next most common presentation (approximately 40%) is a right-sided aortic arch with an aberrant left subclavian artery; this mimics the ARSA pattern, with the left common carotid arising first, followed by the right common carotid, right subclavian, and then left subclavian arteries. As with traditional ARSA, this leads to the formation of a vascular ring and symptoms of tracheal or esophageal compression. Patients with a right-sided arch but a left-sided ligamentum arteriosum can also demonstrate symptoms of vascular ring.[20]

Double Aortic Arch - A rare malformation of the aorta, with a division of the ascending aorta into two arches. These arches generally surround the trachea/esophagus, resulting in the formation of a vascular ring, which most commonly occurs secondary to the persistence of the right fourth aortic arch. Generally, the arches are asymmetric, with 70% presenting as right-side dominant and 25% as left-side dominant. Balanced arches occur only 5% of the time, and the typical presentation in the neonate with symptoms of esophageal or tracheal compression (swallowing disorders, expiratory stridor). Swallowing difficulty can present with respiratory symptoms secondary to recurrent aspiration. Surgical division of the vascular ring is indicated for symptomatic patients, but persistent respiratory symptoms are common due to improper development of the trachea.[21][22]

Persistent Fifth Aortic Arch (PFAA) - This is a rare congenital condition where the fifth aortic arch fails to degenerate unilaterally.[23] Some suspect that the condition is underrecognized, as opposed to truly uncommon.[24] Others doubt that the condition exists at all.[25] PFAA can present in two primary fashions. In the first type, the persistent arch connects the ascending and descending aorta underneath the fourth arch. This leads to a double aortic arch that does not surround the trachea or esophagus. This type has limited consequences functionally or hemodynamically. One case report details a case of a PFAA in a patient associated with aortic coarctation. The surgical repair involved a side-to-side anastomosis, allowing for enlargement of the coarctation and elimination of the double aortic arch.[26] In the second type, the persistent fifth arch merges with a portion of the sixth aortic arch, leading to a systemic-pulmonary shunt. It most commonly occurs in conjunction with other congenital heart defects, including pulmonary atresia and truncus arteriosus. Thus, the shunt is beneficial, as it allows for increased blood delivery to the pulmonary system in these conditions. In patients without an associated defect, this shunt can lead to heart failure in patients as young as two months.[27]

Cervical Aortic Arch - A rare aortic arch anomaly, with a very high location of the aortic arch; this occurs due to the persistence of the third aortic arch, with regression of the fourth aortic arch during development. The arch is typically located in the mid-neck and commonly presents with a right-sided aortic arch. These are frequently asymptomatic but can present with tracheal compression symptoms, esophageal compression, or a pulsatile mass in the neck.[30][31]

Aberrant Right Subclavian Artery - This defect is particularly relevant in thoracic surgery, particularly esophageal dissection or esophagectomy. Lack of knowledge/understanding of this abnormality, present in 0.5 to1.8% of the population, can lead to life-threatening bleeding during esophageal manipulation.[32][33] 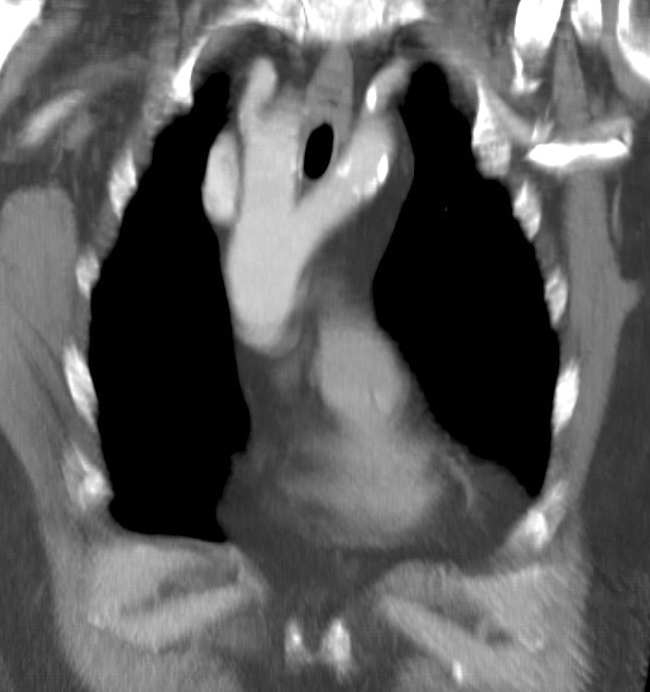 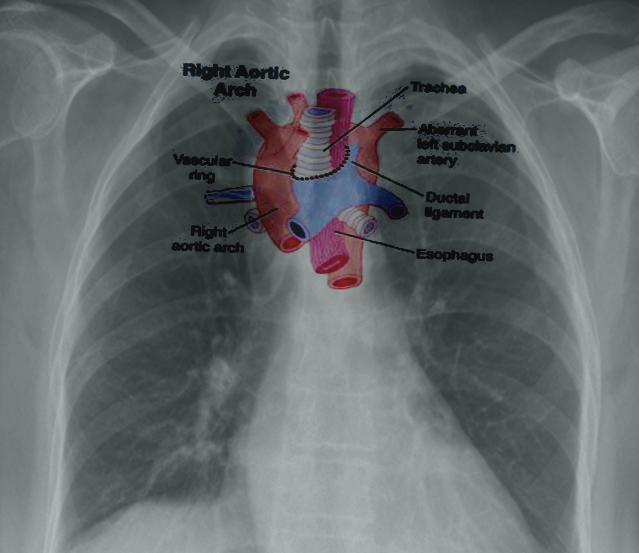 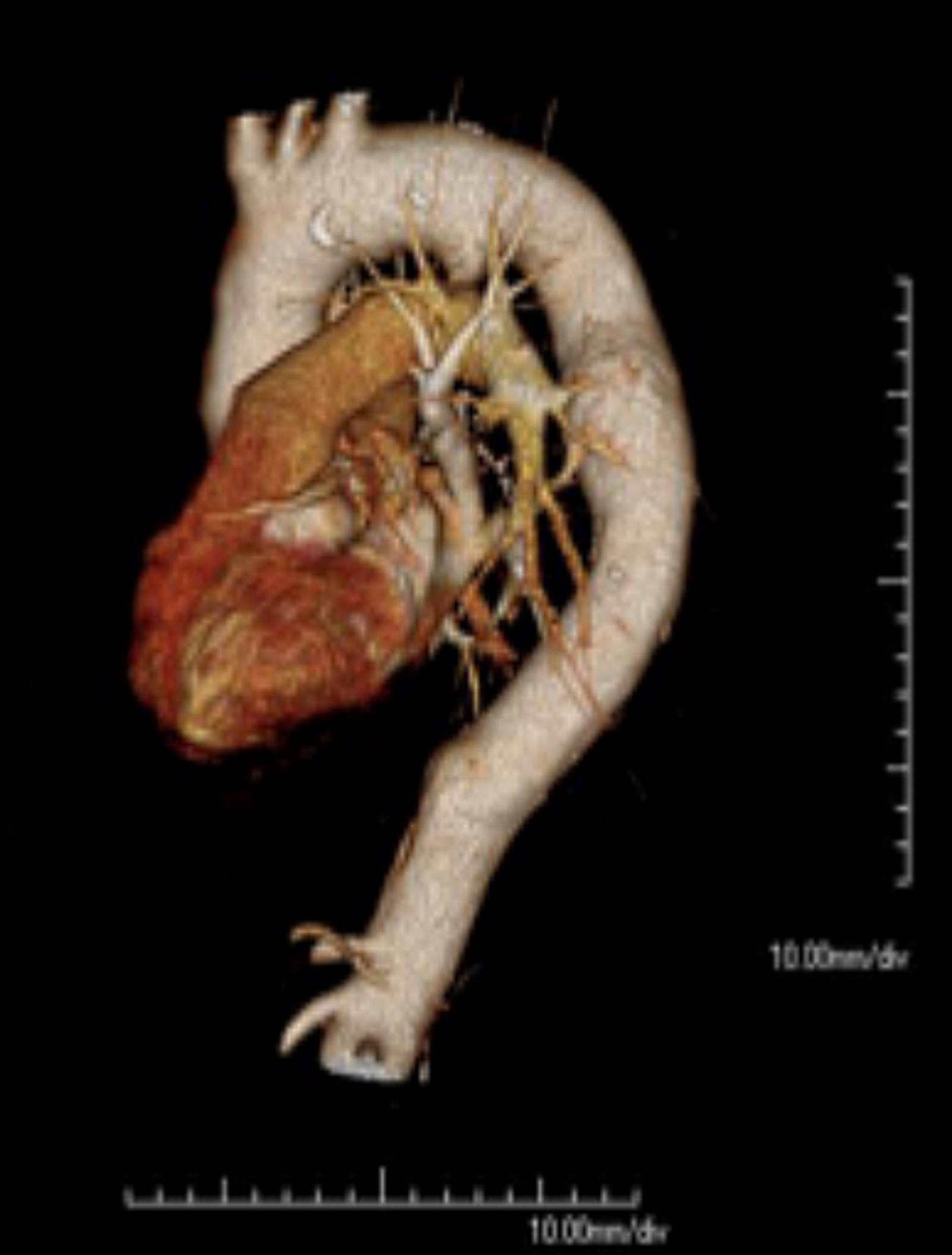 The image shows the thoracic aorta and the aortic arch, through an angio-CT examination.
Contributed by Bruno Bordoni, PhD.