Like all other nerve fibers in the human body, the oculomotor nerve can become impaired in disease states which can lead to lifelong impairment in normal vision. Dysfunction can also be indicative of more serious underlying diseases, such as an aneurysm or a neoplasm.

The oculomotor nerve originates from 2 nuclei in the midbrain[1]:

The oculomotor nerve exits the brainstem near midline at the base of the midbrain just caudal to the mammillary bodies. It passes through the cavernous sinus and proceeds through the supraorbital fissure to reach the orbit of the eye (Figure 1).

The third cranial nerve has both somatic and autonomic fibers. Somatic (voluntary) nerve fibers are bundled deep inside the nerve, while the autonomic (involuntary) fibers surround the somatic fibers around the outside of the nerve. Knowing the spatial layout of these fibers will help one understand the various forms of presentation in third nerve palsies.

There are two primary functions of the autonomic parasympathetic (involuntary) oculomotor nerve. It constricts the pupil (miosis) by innervating the smooth muscle (sphincter pupillae) near the pupil. It also innervates the ciliary muscles. These muscles connect the iris to the choroid. Contraction of the muscle alters the curvature of the lens which allows individuals to focus the lens on near objects (Figure 1).[2]

Cranial nerve III has somatic and autonomic functions. Somatic nerves are homologous with ventral roots of spinal nerves. They originate from the basal plate and innervates the superior rectus, inferior rectus, medial rectus, and inferior oblique muscles. These muscles derive from the first preoptic myotome.

Most research about the development of parasympathetic nerves and the ciliary ganglion has been on chickens. The parasympathetic nerve supply of the oculomotor nerves develops from the caudal midbrain and rostral hindbrain neural crest cells. Some cells may also originate from the ectodermal placode caudal to the eye.[3][4] These cells migrate ventrolaterally and rostrally toward the optic vesicle. As the neurons in the ciliary ganglion differentiate, they extend axons to innervate the blood vessels of the choroid plexus as well as the striated muscles of the iris and ciliary body.[5]

Both the oculomotor nucleus and Edinger-Westphal nucleus are both located in the medial midbrain, which is supplied by the paramedian branches of the upper basilar artery and the proximal posterior cerebral artery.

Saccades are rapid, jerky motions of the eye. This type of motion typically occurs when moving a gaze between objects. When tracking an object, we use smooth pursuit to keep our eyes focused on an object as it moves. When we want to stare at an object, we fixate on that object. Control of each of these actions is by either vestibule-ocular or optokinetic reflexes.

The vestibule-ocular reflex adjusts eye position during fast movements of the head. Head motion activates cells within the semicircular canals. Information about the motion is transmitted to the ipsilateral vestibular nucleus and forwarded to the oculomotor nucleus. Therefore, if the head moves to the left, the eyes move to the right to keep the gaze steady.

The last action is accommodation. This action helps to keep the gaze focused when both vestibular and visual stimuli change. It requires the interaction of circuits between the vestibule-ocular and optokinetic reflexes.[7][8]

Deficits within the peripheral or central vestibular system will result in an inappropriate quick gaze deviation movements of the eyes “nystagmus.” The direction of the fast phase of the nystagmus can assist clinicians in the diagnosis of a patient’s pathology.

Control of other eye muscles is by the trochlear (CN IV) and abducens (CN VI) nerves.

Congenital oculomotor palsy is a rare condition that is typically caused by intracranial pressure at the junction between the posterior communicating artery, and the internal carotid artery causes a local compression of the oculomotor nerve. Symptoms of this disorder include a unilaterally fixed pupil size that is unreactive to light. Additional symptoms include unilateral ptosis and decreased visual acuity.

While oculomotor palsy is not life-threatening, the presence at birth may be a sign of other congenital malformations (e.g., PHACE syndrome, type 2 neurofibromatosis, Klippel-Trenaunay syndrome, etc.). Even without other neurological signs, clinicians should take care to examine these patients for more significant malformations.[9]

One of the main goals of intracranial neurosurgery should be to avoid postsurgical complications. A dilated pupil and ptosis is the most common clinical presentation of oculomotor nerve palsy post-neurosurgery, usually after clipping of an intracranial aneurysm.[10] Patients who undergo open surgery or a minimally invasive technique on basilar artery aneurysms may develop a third nerve palsy after surgery, although this complication has been shown to be transient.[11]

Recognizing oculomotor nerve dysfunction (oculomotor nerve palsy) is crucial because it can be a sign of underlying or uncontrolled chronic disease states. It is an essential clinical symptom that can be life-saving in certain circumstances.

The cause of oculomotor nerve palsy is most commonly by microvascular diseases including diabetes, hypertension, compression from an intracranial neoplasm or an aneurysm, or trauma.[10]

The microvascular disease can affect the vasa vasorum. In these instances, the fibers innervating the upper eyelid and most of the extraocular muscles become ischemic. Compression of the oculomotor nerve can also occur via an aneurysm, intracranial neoplasm, or uncal herniation. These ischemic events can affect the outer pia blood vessels supplying the fibers to the pupil and lens and eventually the inner vasa vasorum.

Evaluation should base its conclusions on the presence or absence of pupil involvement.

If the pupil is spared, obtain:

If the pupil is involved, compression from the outside should be suspected, and one should obtain[2]:

Treatment is conservative in the acute phase.

If diplopia is present and distressful, an eye patch, opaque contact lens, or a blurred lens in glasses covering the affected eye can be helpful.

Botulinum toxin can be useful in the acute setting of partial third nerve palsy with horizontal deviation; best used with paralysis of only the medial rectus. With injection into the overcompensating lateral rectus in these cases, horizontal deviation in the primary position is correctable. If there is mild vertical deviation remaining, prisms in glasses may be of some help. Botulinum toxin should be avoided in vertical muscle imbalance due to the high rate of complications.[12]

Most patients (63%) with an acquired third nerve palsy recover completely with conservative management. Patients with microvascular etiology having the greatest chance of full recovery.[10]

Minimal or no improvement after 6 months of conservative therapy warrants strabismus surgery. Strabismus surgery involves fixing the malalignment of the extraocular muscles. Surgery usually involves a combination of a recession (cutting the muscle from the eye and reattaching it posterior to the initial position to WEAKEN the muscle's function) and resection (removing a section of the muscle to shorten it, STRENGTHENING the muscle's function). Depending on the pair of muscles involved, the surgeon will typically recess the contracted muscle while resecting on the antagonist muscle.[12]

If the pupil is involved, patients should undergo a thorough evaluation by a neurologist.[2]

As individuals age, it is common for individuals to lose the ability to focus within the near range (presbyopia). In these individuals, the ciliary muscle contracts when stimulated. However, the muscle's physical characteristics will show differences that correlate with the presbyopia deficit. Researchers report that in such cases, the muscle is shorter and the internal apical edge moves forward. These results suggest that changes in the muscle, and not changes in the innervation of the muscle, may account for the presbyopia.[13] 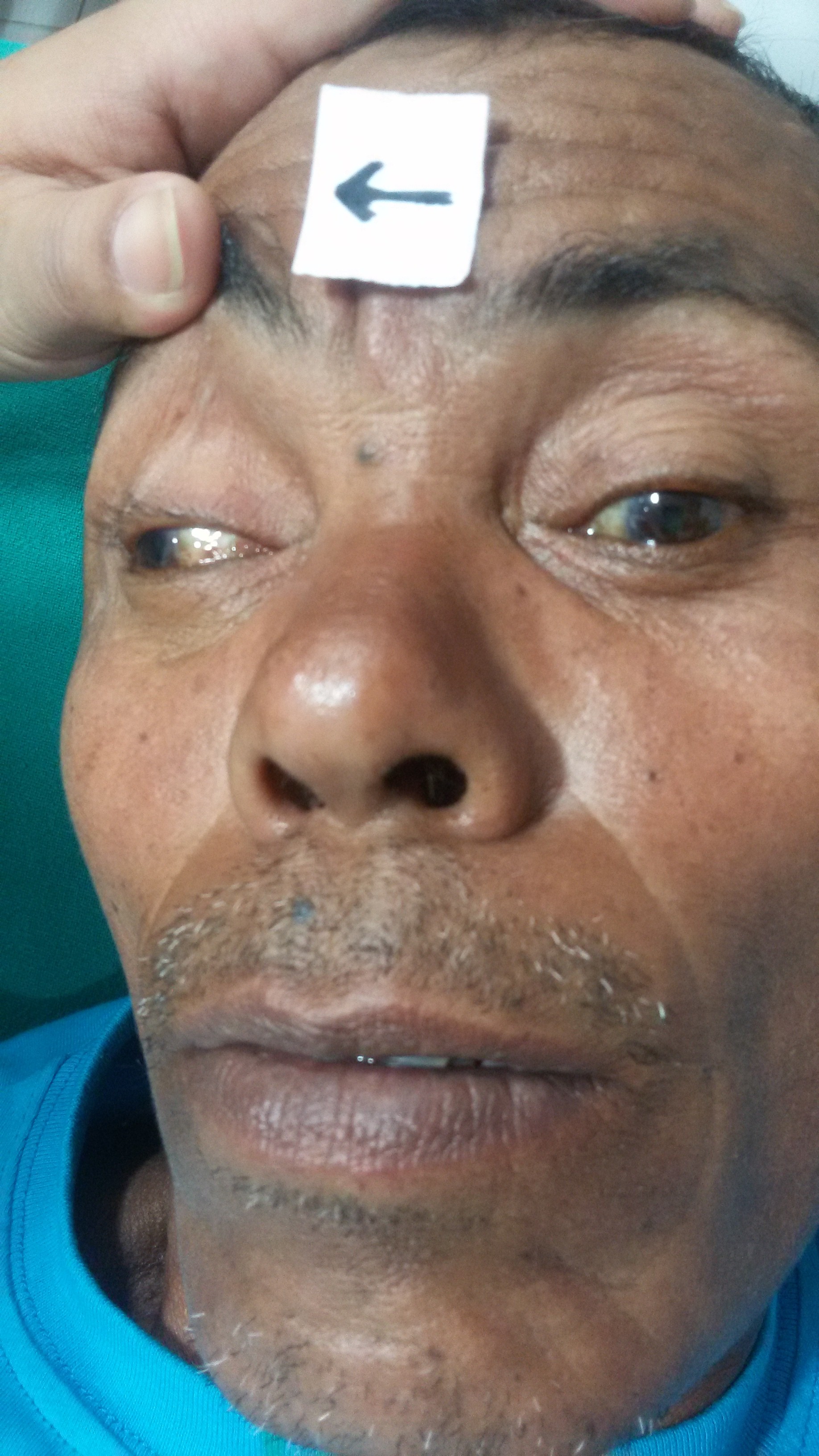