"Adam’s Apple" is the colloquial term used to describe what is officially named the laryngeal prominence of the thyroid cartilage. The colloquial name is thought to come from a reference to the forbidden fruit being stuck in Adam’s throat, or perhaps a mistranslation of the Hebrew term for the structure that is described as “the swelling of a man.”[1] In parts of the American South, it is sometimes referred to as a goozle, playing on the verb "to guzzle."

It is one of the most significant external landmarks in the neck and is very useful for anatomical orientation in procedures such as cricothyroidotomy. It is notably more prominent in men than women, increasing in prominence as a secondary male sex characteristic in puberty, and primarily acts to protect the vocal cords posteriorly.

The thyroid cartilage is the largest of nine cartilages in the larynx. The laryngeal prominence, the Adam’s Apple specifically, is the most visible portion of this structure on the exterior and is where the two halves of cartilage meet. It has important historical, cultural, and interventional implications. It is a secondary sexual characteristic: meaning it appears around the time of puberty and helps distinguish between the sexes, as it is more prominent in men than it is in women. The increase of the laryngeal prominence takes place during puberty and is logically thought to play a role in the voice maturation that also occurs in this period. However, no work has yet been done to prove this relationship decisively, only small reports of cadaver studies.[2]

The classic measurement of the interlaminar angle (ILA) at the level of the vocal processes is 90 degrees in the male population, and 120 in females. The broader angle in women causes it to protrudes less, not push up against the skin of the neck, and ultimately be less visible. In both sexes, regardless of the angle, the primary function of the Adam’s Apple is the same as that of the thyroid cartilage which it comprises, to protect the vocal cords immediately behind it.

Throughout maturity, the thyroid cartilage grows in size, descends, and becomes more cylindrical than funnel-shaped. The two lamina fuse anteriorly, except in the superior most portion, which forms the thyroid notch. The laryngeal prominence in childhood is equivalent in males and females, but the Adam’s Apple protrudes with a greater ILA and greater anterior angulation in males as puberty ensues. Male larynges grow to be larger under the influence of different hormone levels. During puberty, calcification of the thyroid cartilage is simultaneously occurring gradually continues throughout puberty and adulthood.[2]

The area surrounding the thyroid cartilage is drained by the superior laryngeal vein superiorly, as it protrudes from the thyrohyoid membrane to join the superior thyroid vein, which empties into the internal jugular vein, coursing cephalad from the level of the cricothyroid membrane.

Other important nerve structures in this region include the vagus nerve laterally, coursing down inferiorly in the carotid sheath. Also, ansa cervicalis is nearby innervating the overlying strap muscles.

The infrahyoid, or “strap,” muscles (sternohyoid and sternothyroid muscles) serve to depress the hyoid bone and course anteriorly to the thyroid cartilage. These muscles obtain their nerve supply from the ansa cervicalis nerves.

Chondrolaryngoplasty, also known as a tracheal shave or a laryngeal shave, is a cosmetic outpatient procedure done to reduce the visible prominence of the Adam’s Apple. It has an excellent prognosis and is generally performed by plastic surgeons for patients who have undergone gender affirmation surgery, or who no longer desire to have a visible Adam’s Apple. In patients post-gender affirmation surgery, it is occasionally performed in conjunction with a crico-thyroidopexy procedure that aims to raise the pitch of the patient’s voice.[4]

The Adam’s Apple is the most prominent, and one of the most significant laryngeal structures visible exteriorly. Its location is important in many surgical and emergency procedures, most notably in identifying the cricothyroid membrane for a cricothyroidotomy. Studies have shown this proves to be more difficult in women than in men, given the more pronounced angulation in males.

Additionally, as the Adam’s Apple is a secondary sex characteristic, its appearance is a cosmetic consideration in the transsexual community and those exploring gender affirmation/ reassignment surgery. 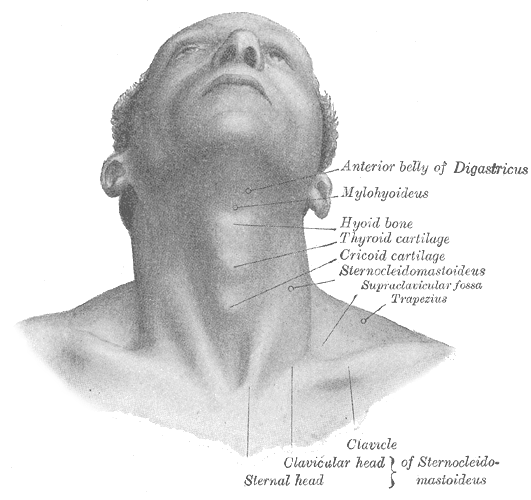 Glikson E,Sagiv D,Eyal A,Wolf M,Primov-Fever A, The anatomical evolution of the thyroid cartilage from childhood to adulthood: A computed tomography evaluation. The Laryngoscope. 2017 Oct     [PubMed PMID: 28608401]