The vasculature of the body is an essential network for maintaining healthy skin tissue. Skin changes, including blanching, ecchymosis, and edema, are a result of changes in vascularity. The face is a highly vascularized region of the body with constant exposure to the harsh environment. One of the most dominant features on the face is the lips, which serve many functions for daily living. The lips are composed of skin, a network of vessels, and muscles. The functionality of the lips relies on the simultaneous action of many muscles to carry out each movement. The movements of these muscles can only function with proper nerve impulses and good blood supply.

The lips receive most of their blood supply from the labial arteries. Due to the various branches, the labial arteries can efficiently provide blood to the lips. Aside from providing blood to the lips for proper function, the blood flow also contributes to the color in the lips. Adequate blood supply is required to maintain appropriate functioning, including breathing, eating, and facial expression.

The branching of the labial arteries from the facial artery and the anastomoses with the contralateral side forms a network around the lips. This network helps perfuse the lips and the muscles in this region. The anastomose network of vessels can provide blood flow to either side if one side becomes compromised.

The nerve that is involved in opening and closing the mouth is the trigeminal nerve. This nerve innervates the muscles used for mastication. The lips are only involved because the muscle around the lips is a sphincter used for eating and speaking. The muscle that is around the lips is the orbicularis oris; this muscle acts as a sphincter muscle. The orbicularis oris muscle receives innervation from the facial nerve. The facial nerve also innervates muscles that attach to or close to the lips used in facial expression.[4]

Some muscles influence the action so the lips in facial expression due to their attachments. Due to the attachments from the levator labii, the zygomaticus minor, the zygomaticus major, and the levator anguli oris, they act on the orbicularis oris in laughing and smiling. While the depressor anguli oris and the depressor labii inferioris muscle act on the orbicularis oris in sadness and frowning.

In plastic surgery, the facial artery's pulsatile motion may create an undesirable appearance unilaterally. The ligation of one facial artery usually causes no severe consequences because of the collateral blood flow from the contralateral facial artery's branches.[7] Another cosmetic procedure is lip fillers, with the knowledge of the anatomy of the labial arteries, which can provide maximally aesthetic appearance with optimal safety. Since the labial artery is deep in the lips, fillers may be injected superficially without damaging the underlying arteries.[8]

As for traumatic damage to the lips that require reconstruction. Reconstruction of the lips has a good prognosis because of the vast blood supply in the lips promoting proper perfusion and a quicker healing process.[2][9][10]

Since the blood supply in the lips is from the labial arteries, the lips appear pink with adequate perfusion and blue in ischemia or hypoxia. The appearance of the lips can be a supporting indicator of the perfusion and oxygenation status in a patient.[11]

The lip is a vascular region of the face formed from the network of arteries. When it comes to lip laceration or trauma, compressing the bleeding lip may require more pressure and time to achieve hemostasis.[12] 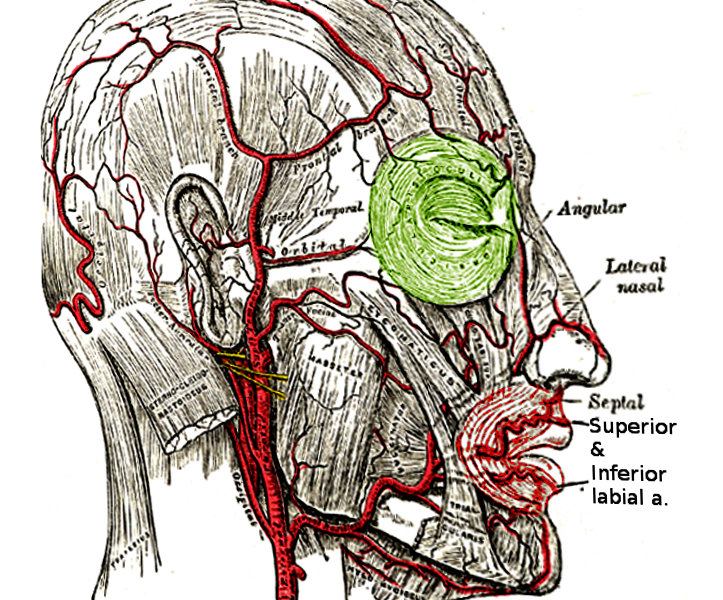 Mukdad L,Alonso JE,Han A,Kuan EC,St John MA, Distribution of metastatic regional lymph nodes in squamous cell carcinoma of the oral commissure and its implications for treatment in the neck. The British journal of oral     [PubMed PMID: 30293803]