The frontal bone in an adult is an unpaired bone that is a part of the boney structure that forms the anterior and superior portions of the skull.  At the beginning of life, it is a bone separated by a temporary suture called the frontal suture. It then transforms into a singular front bone, absent the suture in most cases.  Throughout life, it plays a vital role in protecting important neural structures and forms the superior aspect of the orbit.  Frontal bone fractures occur in roughly 5% to 15% of all facial fractures.[1][2]

The frontal bone borders several bones on its external surface.  Anterior and medially it joins the nasal bone to create the area called the nasion.  Laterally to this, it joins the superior aspect of the maxillary bone bilaterally.  Laterally from the maxillary bone, it connects to various bones that form the posterior aspect of the orbit.  From medial to lateral, it connects to the lacrimal bone, sphenoid bone, and the zygomatic bone.  Posterior and lateral to the zygomatic bones, it connects again with the temporal surface of the greater wing of the sphenoid, then finally the parietal bones posteriorly. The frontal bone alone creates the roof of the orbit.  It also contains a small zygomatic process to connect with the zygomatic bone just lateral to the lateral wall of the socket.

There are two anatomically important landmarks found on the external surface of the skull that the frontal bone contributes to the bregma and the pterion.  The bregma is the location where the sagittal and the coronal sutures meet.  The coronal suture is a syndesmosis that joins both parietal bones and the posterior aspect of the frontal bone.  The frontal bone has an involvement in the formation of the pterion, a joining of four cranial bones: frontal, sphenoidal, parietal, and temporal.

Lastly, the anterior aspect of the frontal bone contains two frontal sinuses, each superior to the orbital roof.

The frontal bone derives from neural crest cells, along with the anterior bones of the skull.[3]  At birth, the frontal bone is separated into two parts by the frontal suture (metopic suture), which disappears in normal development.  In some cases, the frontal suture persists partially, which usually lies superior to the nasoin.  This condition is termed metopism[4]  The bregma in the adult is the same area as the anterior fontanelle in the infant.  It is the meeting of the coronal, sagittal and the frontal suture and is clinically significant when assessing the health of an infant.  Additionally, when these sutures close prematurely, they can lead to a developmental abnormality involving the shape of the skull termed craniosynostosis.[5]

The dermatomal area of the skin overlying frontal bone the by the ophthalmic branch of CN V.  This makes sense as the frontal bone has two supraorbital foramina where this branch can exit the cranium and supply the skin superficial to the frontal bone.

CN VII is significant for the frontal bone region due to its innervation of the muscles in the area that are involved in facial expression.  Mainly this includes the frontalis, procerus, and orbicularis oculi.

Frontal bone injuries in the adult usually occur secondary to trauma.  A 2014 retrospective study analyzing close to 4,000 cases of frontal bone fractures noted the most common etiology (about one-third of cases) were secondary to motorcycle accidents.[7]

The management of frontal bone fractures takes into consideration the location and displacement of the fracture(s) as well as the presence or absence of any associated maxillofacial or other head injuries.  Many different surgical approaches have been described, with some common approaches making use of any pre-existing lacerations that have occurred secondary to the injury itself.  One technique utilizes the development of a bicoronal flap in approaching the fracture.  Common surgical fixation options include the use of titanium plates/screws, titanium mesh/screws, or a combination of these methods to obtain an ideal open reduction internal fixation construct.

Common postoperative complications include, but are not limited to the following:

The anterior fontanelle (infant) which eventually becomes the bregma can be used to assess infants on physical examination.  A bulging fontanelle can suggest increased intracranial pressure and further guide a physician to a diagnosis.[8]  Likewise, a depressed fontanelle can help assess an infants hydration status.  Infant fontanelle areas, sutures, and overall head shape should be monitored for premature closure, and a condition called plagiocephaly.  Plagiocephaly is a unilateral flattening of the anterior or posterior quarter of the cranium.[5]  This can have grave implications in the growth and development of the brain if not corrected.

The pterion is an area on the lateral aspect of the frontal bone.  This area is a joining of four cranial bones: frontal, temporal, sphenoid, and parietal.  It is clinically significant because it overlies the middle meningeal artery, a large artery supplying the dura.  A fracture or trauma to this area should receive a thorough assessment to determine any damage to this structure.

The frontalis muscle can be of clinical significance for the field of plastic surgery when considering areas for botulinum toxin injection.  The normal use of this muscle throughout a lifespan has been known to cause horizontal wrinkles, and therefore botulinum toxin treatments to this site can limit wrinkling.[9]

Clinical symptoms characteristic of a frontal bone fracture include, but are not limited to, the following[7][10] 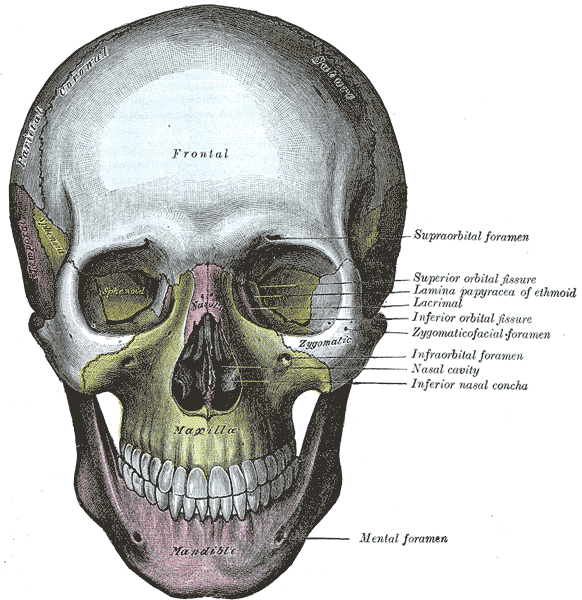