The occipital bone is the most posterior cranial bone and the main bone of the occiput. It is considered a flat bone, like all other cranial bones, meaning that its primary function is either for protection or to provide a broad surface for muscle attachment. The scalp, which consists of five layers, covers the bone. Going from superficial to deep, the scalp layers are skin, dense connective tissue, aponeurosis of the occipitofrontalis muscle, loose areolar connective tissue, and the periosteum. Within the dense connective tissue are the occipital artery and vein, and the lesser and greater occipital nerves. The inner part of the bone forms the posterior cranial fossa.

The occipital bone is a very complex bone that serves primarily to protect the cerebellum and the occipital lobes of the cerebrum and to provide attachment to several muscles and ligaments described below. It is trapezoidal and shallowly curved on itself. It consists of outer and inner layers of cortical bone that sandwich cancellous bone, or diploe. It borders the parietal bones on either side superiorly to form the lambdoid suture, and the mastoid portion of the temporal bone to form the occipitomastoid suture on either side inferolaterally. The sphenoid bone articulates with it anteriorly via the inferior angle, and with the atlas inferiorly. The foramen magnum is part of the occipital bone, through which the medulla oblongata, the accessory nerves, the anterior and posterior spinal arteries, the vertebral arteries, the alar ligaments, and the tectorial membranes passes. It consists of three parts, including the basilar, condylar, and squamous parts, all of which have outer (facing the outside) and inner (facing the brain) parts.

The condylar part makes up the lateral edges of the foramen magnum on the undersurface of the occipital bone and is also known as the exoccipitals. It is made up of protuberances on either side of the foramen magnum called the occipital condyles, serving as an articular surface to the superior facets of the atlas. At the base of the condyles on the cranial (inner) side is the hypoglossal canal where the hypoglossal nerve exits, and a branch of the ascending pharyngeal artery enters. Posterior to the condyles is the condyloid fossa, a depression that articulates with the superior facet of the atlas during neck extension. Within the fossa is the condylar canal, where there may be an occipital emissary vein that perforates the bone to connect the occipital sinus, sigmoid sinus, and suboccipital venous plexus. The capsules of the atlantooccipital articulation attach to the margins, and medial to these is a tubercle where the alar ligament attaches. The jugular process comprises the anterolateral part of the bone on either side, on which the rectus capitis lateralis muscle inserts. Anterior to these processes is the jugular notch, forming the posterior portion of the jugular foramen.[1]

There are typically four nuclei in the occipital plane to develop via intramembranous ossification. The nuchal plane of the squamous occipital bone ossifies via endochondral ossification from two nuclei. Occasionally, a Kerckring center will form at the posterior margin of the foramen magnum that will go on to form a separate ossicle. The condylar occipital bone ossifies from two centers, one center for either side of the foramen magnum, and the basilar part ossifies from two centers as well. Ossification of the occipital bone may occur as early as the ninth week of gestation. There had been much debate regarding the development and ossification process in the past, but recent studies of the complex gene and molecule interactions involved have helped with clarification.[3]

The occipital area receives its blood supply from the occipital artery, and the blood drains via the occipital vein. The occipital artery has its origin from the external carotid artery, where it is deep to the digastric posterior belly and the hypoglossal nerve winds around it. It travels superiorly and posteriorly, passing superficially to the internal carotid artery and the vagus nerve, before anastomosing with the deep cervical artery as it courses just beneath the mastoid process of the temporal bone. It then travels along the deep to the sternocleidomastoid and splenius capitis muscles until it reaches the occipital bone's superior nuchal line, where it then travels superficially to the semispinalis capitis muscle. After it has coursed about halfway across the semispinalis capitis and just lateral of the trapezius, the artery then courses vertically up the back of the head superficial to the occipital belly of the occipitofrontalis. It ascends tortuously up the head in the superficial fascia, anastomosing with a branch of the posterior auricular artery. Then at the crown of the head, it anastomoses with the parietal branch of the superficial temporal artery.

The occipital artery supplies blood to more than just the occipital area, as evidenced by its several branches, including the auricular, descending, meningeal, muscular, and sternocleidomastoid branches. The auricular branch supplies the area behind the ear, and a mastoid branch supplies the mastoid air cells, diploe, and dura mater. The descending branch is the largest division and contains a deep and superficial portion. The superficial portion provides blood to the trapezius, and the deep portion anastomoses with a branch of the costocervical trunk, providing collateral circulation via the external carotid and the subclavian artery. The meningeal branch supplies the posterior cranial fossa dura mater. The muscular branches supply several muscles along the course of the occipital artery, including the digastric and longus capitis muscles. The sternocleidomastoid branch divides at the carotid triangle into upper and lower branches and supplies the muscle it is named after.

As mentioned above, the occipital bone contains the foramen magnum, through which the spinal cord and accessory spinal nerve travel along with several blood vessels.

Several muscles attach to the inferior part of the occipital bone, whose insertions were discussed in the “Structure and Function” section. The most medial and superficial of these is the trapezius, with its multiple origins, one of which is the external occipital protuberance. Its innervation and blood supply will not be discussed here.

Just deep and on either side of the vertebrae are the left and right semispinalis capitis muscles, serving to extend and flex the cervical and thoracic spine and head laterally. These muscles are innervated by the dorsal primary rami of spinal nerves C3 to T6 and receive blood from the posterior intercostal arteries, the deep cervical artery, and the lumbar arteries.

The occipital emissary vein may not be present in all individuals, and it may only pass through a singular condylar canal, or through multiple, smaller clustered canals.[7]

The jugular tubercle on the upper surface of the lateral condylar part of occipital bone may sometimes have an oblique groove for cranial nerves IX, X, and XI.

Cerebral dural sinus venous blood flow in the torcular Herophili, also known as the confluence of the sinuses, on occipital bone’s inner surface is variable.[8] It categorizes into four types based on the continuity between the transverse sinus grooves and the superior sagittal sinus grooves. In descending order of frequency, these types are the right dominant type, confluence type, bifurcation type, and left dominant type.[9]

See lacerations below in clinical significance.

Deep lacerations to the occiput and scalp, in general, are inclined to bleed profusely for several reasons:

The scalp veins may be used for venous catheterization as they offer easy access with little risk, with the occipital vein being among the most commonly used. Scalp catheterization is utilized in infants and neonates after unsuccessful attempts at cannulation of extremity veins as the scalp veins in this population have less overlying subcutaneous fat and are more prominent compared to other peripheral sites, and they are less obscured by hair, providing easier visualization and cannulation.[10]

The ‘danger area of the scalp’ refers to the layer of loose areolar connective tissue as it contains the valveless emissary veins that connect the superficial veins in the subaponeurotic space with the intracranial venous sinuses. Although not always present, the occipital emissary vein connects the occipital vein to the confluence of the sinuses. This connection makes it possible for an infection to spread from the occipital scalp to the meninges.

Since the abducens nerve runs near the clivus of the basilar part of the occipital bone, increased intracranial pressure may trap the nerve at this point, causing abducens palsy. The clivus also serves as a critical landmark for ensuring anatomical atlanto-occipital alignment on cervical spine x-rays.

Occipital trauma may cause a basilar skull fracture, which would present with ecchymosis behind the ears, or “battle sign.” If occipital bone surrounding the foramen magnum is fractured, there is a higher risk of damage to the exiting blood vessels and nerves described above.

During delivery, it is crucial to identify the location of the fetal occiput. Several genetic disorders may present with a prominent occiput, the most common of which is trisomy 18, or Edwards syndrome. This condition is important to identify because of its association with heart (most commonly VSDs and ASDs) and renal defects, among others, and survival beyond one year of life is rare, although many of the afflicted will not make it to birth. Other signs that would be indicative of Trisomy 18 are microcephaly, micrognathia, low-set and malformed ears, and rocker bottom feet. It is associated with omphalocele. 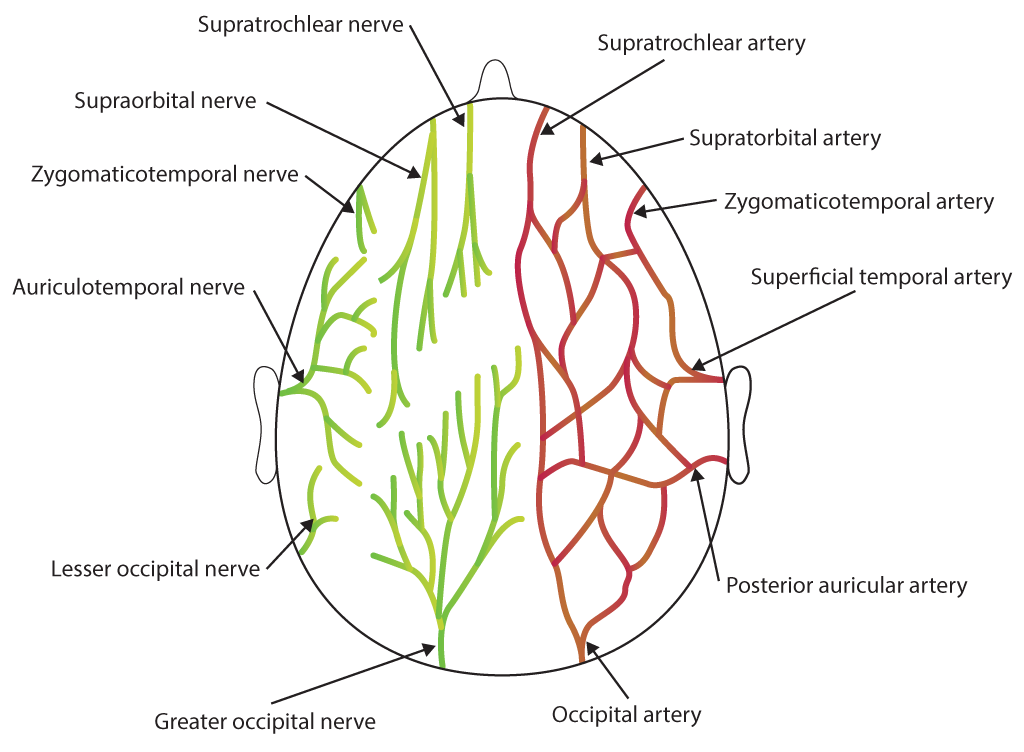 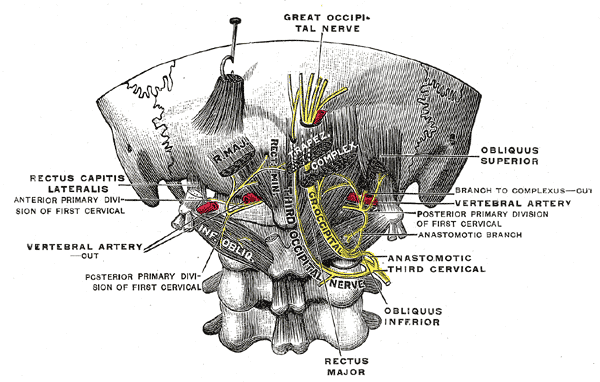 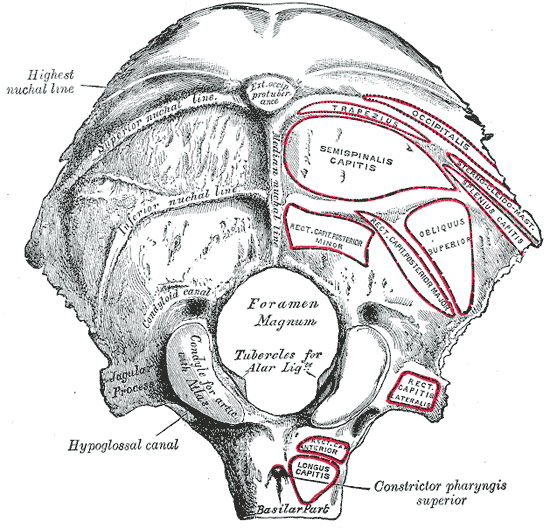