Once there is adequate fetal-placental circulation established, blood transports between fetus and placenta through the umbilical cord containing two umbilical arteries and one umbilical vein. The umbilical arteries carry deoxygenated fetal blood toward the placenta for replenishment, and the umbilical vein carries newly oxygenated and nutrient-rich blood back to the fetus. When delivering oxygenated blood throughout the developing fetus, there are unique physiologic needs, supported by specific structures unique to the fetus which facilitate these needs.

After being carried through the inferior vena cava, the next stop for blood is the right atrium of the fetal heart. In an adult, the heart and lungs work together to both replenish the oxygen content of blood, and then pump that oxygenated blood to be distributed throughout the body. In the fetus though, developing lungs are bathed in amniotic fluid and have no access to oxygen. Thus, the placenta supplies all oxygenated blood, and there is no reason for blood to enter the lungs for oxygenation. The fetal heart therefore serves the sole purpose of pumping blood to be distributed throughout the rest of the developing fetus while allowing the vast majority of blood to bypass the lungs. There are two structures that allow for this bypass of the lungs. The first structure is encountered in the right atrium. An opening within the atrial septum termed the foramen ovale carries blood from the right atrium directly into the left atrium, thereby bypassing the right ventricle and lungs. Blood that traverses through the foramen ovale then travels from left atrium to the left ventricle to the ascending aorta and is then pumped into systemic circulation. This is the method by which most blood bypasses the lungs.

When following inferior vena cava blood, the well-oxygenated blood from the ductus venosus courses mainly on the medial side of the vessel. When this blood then enters the right atrium, it stays medial, therefore being directed toward the medially-placed foramen ovale. The less-oxygenated blood that came from the hepatic vein courses on the lateral side of the vessel; this less-oxygenated blood then stays lateral when it enters the right atrium, therefore missing the foramen ovale and instead entering the right ventricle, as it would in adult circulation. Similarly, deoxygenated blood entering the right atrium via the superior vena cava misses the foramen ovale in its downward pattern of flow, and it enters the right ventricle as well. This mixture of blood is then pumped from the right ventricle to the pulmonary trunk. However, the lungs are filled with amniotic fluid, creating a pressure which is too high for blood to enter the pulmonary arteries at this point. This is another protective measure, ensuring minimal fetal blood enters the lungs during development. Instead, a second fetal structure for bypassing the lungs exists, connecting the pulmonary artery directly to the descending aorta. This vessel is termed the ductus arteriosus. Ductus arteriosus patency is maintained in utero by prostaglandins, which have dilatory effects on vessels. Blood shunted through the ductus arteriosus then bypasses the lungs and mixes with blood from the descending aorta, which is carrying the blood that had previously passed through the foramen ovale. Blood which had been shunted around the lungs through either mechanism is then pumped into systemic circulation, bringing oxygenated and nutrient-rich blood to the rest of the developing fetal structures. Once oxygenated blood has circulated and unloaded its oxygen to developing tissue, it is delivered back to the placenta via the umbilical arteries to become re-oxygenated and repeat the process.[3]

Overall, as blood delivered in the umbilical vein traverses through fetal vessels, it gradually decreases in oxygen content over time. Multiple sites of circulation at which oxygen content decreases have been discussed, including: the mixing of deoxygenated hepatic vein blood with oxygenated ductus venosus blood in the inferior vena cava; the mixing of deoxygenated blood from the head and arms with oxygenated ductus venosus blood in the right atrium; and unloading of oxygen throughout the rest of fetal circulation.

The brief persistence of blood flow through the umbilical vein after birth is the rationale behind the practice of delayed cord clamping following delivery. Umbilical cords are recommended not to be clamped until at least 30-60 seconds following delivery to allow for the maximum volume of blood to be transferred to the infant before disconnection from the placenta; this has been shown to increase iron stores in the neonate, increase hemoglobin levels, and improve transitional circulation. This practice of delayed cord clamping is therefore recommended following birth unless there is either a maternal or neonatal indication for immediate cord clamping.[6]

The foramen ovale only completely closes as expected in about 75% of adults. In the 25% whose foramen ovale does not close, a patent foramen ovale exists. Fortunately, the left atrial pressure is usually higher than the right atrial pressure, a very tiny amount of blood may be shunted back to the right atrium without any clinical significance. During certain uncommon situations such as Valsalva maneuver, a small amount of deoxygenated blood from the right atrium may be allowed to enter the left atrium, bypassing the lungs without oxygenation. This patency may or may not be symptomatic, and management ranges widely as a result. Often no intervention is required, or surgery may sometimes be indicated to close the patent foramen ovale. Note that this is quite different than an atrial septal defect, in which a pathological opening exists between the left and right atria, and tends to be more severe and usually shows symptoms, whereas a patent foramen ovale may never be detected nor show symptoms.

The ductus arteriosus may persist, failing to obliterate within the months after birth and has associations with congenital rubella infections and as well as with preterm delivery.[8] The resulting patent ductus arteriosus (PDA, see figure) will allow for a small volume of blood to flow continuously from the aorta to the pulmonary circulation and rarely some deoxygenated blood to enter systemic circulation from the pulmonary artery. This continuous shunt of blood is the basis of a continuous murmur on auscultation. If left untreated for years, the increase in pulmonary blood flow caused by the increase in the aortic to pulmonary arterial shunt will result in pulmonary arterial hypertension and more right to left shunt and more deoxygenation of the systemic circulation causing cyanosis. The affected individual may start showing signs of cyanosis, typically in the lower extremities, due to a decreased amount of oxygen delivery. Management of a PDA is highly dependent on the clinical situation.

If a PDA is the only defect following delivery, and no other cardiac abnormalities are present, a prostaglandin synthesis inhibitor may be used to disrupt the prostaglandin production that is contributing to the maintained patency of the vessel. Indomethacin, a COX-2 inhibitor, has historically been the treatment of choice; ibuprofen and acetaminophen may also be efficacious options, although more research is needed.[9] Surgical closure may also be a consideration. Conversely, there are certain cyanotic congenital heart defects (for example, transposition of the great vessels) in which the circulatory system allows little or no deoxygenated blood delivery to the lungs. As a result, little or no oxygenated blood can be delivered systemically, causing cyanosis in peripheral tissues. In this case, therapeutically maintaining a patent ductus arteriosus allows some mixing of oxygenated and deoxygenated blood, allowing some amount of oxygenated blood into systemic circulation, which can assist in decreasing the severity of cyanosis in affected infants. To accomplish this, prostaglandin E1 may be administered to maintain patency of the ductus arteriosus until surgical correction of the underlying heart defect can be performed.[10] 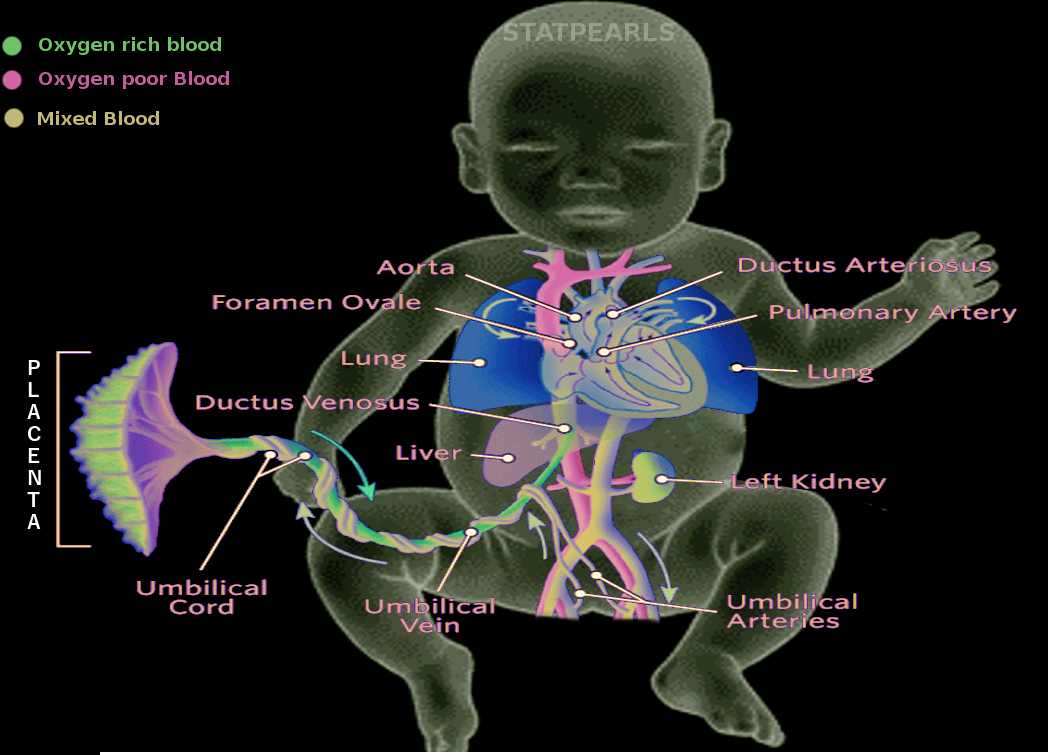 Kiserud T,Stratford L,Hanson MA, Umbilical flow distribution to the liver and the ductus venosus: an in vitro investigation of the fluid dynamic mechanisms in the fetal sheep. American journal of obstetrics and gynecology. 1997 Jul     [PubMed PMID: 9240587]

HOLMES RP,DAVIES DV, The vascular pattern of the placenta and its development in the rat. The Journal of obstetrics and gynaecology of the British Empire. 1948 Oct;     [PubMed PMID: 18892167]