The forearm is the region of the body spanning from the elbow to the wrist. It consists of several muscles and an extensive neurovascular network encased in three compartments. These include the anterior compartment, posterior compartment, and the mobile wad. The compartments of the forearm are separated by an interosseous membrane found between the radius and ulna in addition to a lateral intermuscular septum.

The interosseous membrane of the forearm is a Z shaped fibrous sheet that connects the radius and ulna forming a syndesmosis. The membrane divides the forearm into the anterior and posterior compartments and is the site of attachment for many muscles. Its main function is to transfer forces from the radius, ulna, and humerus. The lateral intermusclar septum is an additional structure that helps delineate the compartments of the forearm.

The dorsolateral somite cells migrate to the upper limb around the fourth week to form the muscles of the upper limb. Many transcription factors are activated at various stages, allowing the limb buds to develop. Connective tissue derived from the lateral plate of the mesoderm divides the forearm into extensor (dorsal) and flexor (volar) compartments.

The forearm has a vast vascular network. The brachial artery divides at the elbow giving rise to the ulnar and radial arteries which are located along the ulnar and radial aspects of the anterior forearm compartment. The radial artery supplies the posterolateral forearm and courses lateral to the flexor carpi radialis. The ulnar artery supplies the anteromedial aspect of the forearm and gives rise to the anterior and posterior interosseous arteries which course in the deep anterior and posterior compartments respectively bringing supply to deeper structures of the forearm.

The lymphatic drainage of the forearm uses a lymphatic plexus which originates on the distal extremity that flows proximally to superficial lymphatic vessels towards the axillary lymph nodes.

Martin-Gruber connection, which occurs in approximately 15 to 18% of people is just one example of the many neurovascular variations in the forearm. It involves the median nerve connecting to the ulnar nerve during its course under the flexor digitorum superficialis.[6] This cross-connection allows for median nerve innervation to some intrinsic muscles of the hand that are usually supplied by the ulnar nerve.

Compartment syndrome of the forearm is a relatively common clinical problem, and prompt surgical intervention can be limb saving. Orthopedic, vascular and general surgeons should be familiar with surgical decompression of the forearm.

Forearm Fasciotomy A standard OR table with a hand table is preferred. Starting on the anterior forearm, an incision should begin just proximal to the wrist crease and extend proximally to the distal ulnar aspect of the elbow flexion crease. Proceed through the subcutaneous tissue and the fascia into the anterior compartment. A small nick is made in the fascia, and Mayo scissors are slid down the length of the forearm compartment releasing the compartment. Assess the deep and superficial muscles. Now mark the second radial sided anterior incision. This incision is a middorsal straight-line incision that begins 3 cm proximal to the wrist crease and extends down to the radial aspect of the elbow flexion crease. After going through the subcutaneous tissue and fascia along the entire length of the radial sided incision, finger dissect and release the posterior compartment and mobile wad. Examine all the muscles in both compartments. All nonviable necrotic tissue in any fasciotomy should be debrided. However, after the fascial releases, muscles will bulge out and even some slightly devitalized appearing muscle may recover over time. After adequate release on all three compartments has been achieved many dressing options can be explored. There are reports of good outcomes with negative pressure wound therapy, tissue expanders, wet to dry dressings.[2] The patient should be monitored and a repeat surgical irrigation and debridement in 1 to 3 days may be required prior to definitive closure.

Compartment syndrome is primarily a clinical diagnosis. Stryker monitoring can is an option when the clinical exam is unequivocal, or the patient is intubated and sedated. A delta pressure of less than 30 is more specific to compartment syndrome than an absolute compartment pressure of greater than 30. Delta pressure is the difference between diastolic blood pressure and compartment pressures measured by the stryker monitor. The history usually includes a swollen forearm following some form of trauma or a vascular insult. Multiple bone fractures, especially when on the ipsilateral extremity has a strong association with compartment syndrome. However, isolated fractures such as both-bone forearm fractures in adults and supracondylar humerus fractures, especially those with associated vascular injuries, in kids are frequent causes of compartment syndrome.[7] The flexor digitorum profundus and flexor pollicis longus are often injured most severely secondary to their deep location. Tense and non-compressible compartments are more specific to compartment syndrome than a softly swollen forearm. During the physical exam, it is vital to assess all three compartments, as the pathology can be limited to just one compartment. The most sensitive exam finding is a pain with passive stretch or extension of the fingers or wrist.[8] Pulselessness, paresthesias, and loss of motor function are late findings, at which point ischemic insults have already taken place.

Many of the muscles in the anterior compartment attach to the medial epicondyle via a common flexor tendon. Medial epicondylitis, commonly referred to as Golfer's Elbow is an overuse syndrome of the flexor mass. The condition occurs in athletes whose sports require repetitive wrist flexion and pronation. These sports include golf, baseball, and racquet sports. The inflammation can progress and cause an ulnar neuropathy. Management is typically nonoperative involving rest, ice, and pain control. [10] 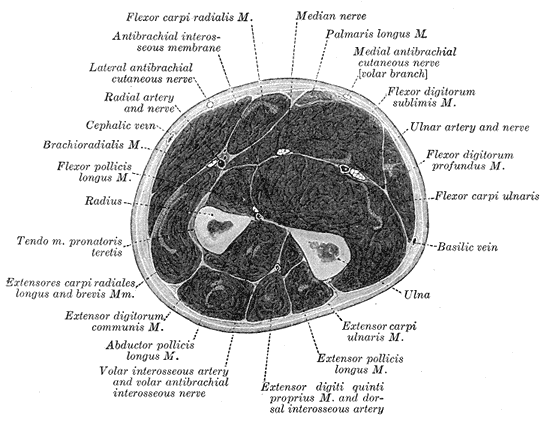