Cutaneous innervation of the shoulder and upper limb comes from multiple peripheral nerves originating from cervical and thoracic nerve roots, with most of the nerves originating from the brachial plexus. Location of pain or deficits in sensation can be clinically useful in determining the location of a nerve lesion, especially when combined with an associated motor deficit. This activity will specifically discuss the surrounding anatomy of the nerves providing shoulder and upper limb cutaneous innervation and will be assessing the sensory distribution as it relates to nerve injuries.

The majority of cutaneous and motor innervation of the shoulder and upper limb arise from the brachial plexus, which originates from the C5 to T1 ventral rami.[1][2] There is also a contribution from the supraclavicular nerve of the C3 and C4 ventral rami to the superior aspect of the shoulder and the intercostal brachial nerve of the second and third intercostal nerves in the axilla.

Arising from the C3 and C4 ventral rami, the supraclavicular nerve (SCN) courses deep to the sternocleidomastoid muscle and passes through the posterior triangle of the neck, deep to the platysma muscle before dividing into the medial/anterior, intermediate, and lateral/posterior branches which provide cutaneous innervation to the superior, anterosuperior, and posterosuperior aspect of the shoulder.[6][7]

This nerve originates from the posterior cord of the brachial plexus with contributions from the C5 and C6 ventral rami. The axillary nerve travels through the inferior-lateral axilla, and around the surgical neck of the humerus with the posterior circumflex humeral artery.[8][9][10] After providing motor innervation to the deltoid, the axillary nerve gives off the lateral superior cutaneous nerve branch which innervates the lateral skin of the shoulder.[11][12][13]

The median nerve's origin is from the medial and lateral cords from the brachial plexus with contributions from the C6 to T1 ventral rami. It travels with the brachial artery from the axilla and crosses medially to pass through the cubital fossa. Before passing through the carpal tunnel, the median nerve gives off the palmar cutaneous branch for sensory innervation of the lateral palm and the anterior interosseous nerve which provides motor to the majority of the anterior forearm muscles. After passing through the carpal tunnel, the nerve divides again into the recurrent branch of the median nerve to innervate the thenar muscles and the palmer digital branch to provide sensation to the first three digits and radial side of the fourth, and motor to the first and second lumbricals.

The ulnar nerve derives its origin from the medial cord of the brachial plexus with contributions from the C8 and T1 ventral rami. After passing the axilla, it travels medially to the brachial artery until passing through the intermuscular septum into the posterior compartment. It travels posteriorly to the medial side of the arm and passes through a musculoaponeurotic structure known as the arcade of Struthers to reach the epicondyle of the humerus within the cubital tunnel. Before entering the wrist, the ulnar nerve divides into muscular branches and palmer and dorsal cutaneous nerve branches. The palmer nerve branch supplies sensation over the hypothenar eminence and the dorsal nerve branch supplies sensation to the proximal one-third of the fifth phalanges and ulnar side of the fourth phalanges. The ulnar nerve passes through the canal of Guyon to enter the hand, and it splits into the deep motor branch and cutaneous superficial branch, which innervates the cutaneous skin of the distal two-thirds of the proximal fifth phalanges and ulnar side of the fourth phalanges.

After branching from the medial cord of the brachial plexus with C8 and T1 contributions, this purely cutaneous nerve courses along the medial side of the upper arm, and pierces the deep fascia and supplies innervation to the cutaneous medial upper arm. It has connections with the medial antebrachial cutaneous nerve ulnar branch.

This cutaneous nerve branches from the medial cord of the brachial plexus with C8 and T1 contribution. It passes down the anteromedial side of the upper arm and innervates a portion of the cutaneous skin over the anterior upper arm, specifically the skin overlying the biceps brachii.[15] Before reaching the elbow, the nerve courses medial to the brachial artery and eventually divides into ulnar and volar branches.[16] The ulnar branch communicates with the medial brachial cutaneous nerve and provides medial and posterior sensation down the medial forearm to the wrist. The volar branch supplies sensory innervation to the medial and anterior side of the forearm to the wrist.

The intercostal brachial nerve arises typically from the second intercostal nerve and supplies a cutaneous area in the axilla.

Nerve cutaneous distribution can also divide into dermatomes, which breaks sensation into nerve root patterns. Although there is significant overlap between the dermatomes, the general guidelines listed below for dermatome distribution refer to the location at which the nerve root innervation can reliably be isolated from the other nerve roots.[17]

A common variant of the supraclavicular nerve is an absent intermediate branch with larger anterior and posterior branches.[18]

Multiple common clinical scenarios can cause damage to the nerves of the shoulder and upper limb, which this activity discusses individually below. Any nerve could be damaged in cases of direct trauma and may be diagnosed clinically based on the sensory pattern of the nerve as outlined previously.

Damage to the supraclavicular nerve branches is a common complication after a clavicle open reduction internal fixation (ORIF). It also can be seen in open clavicle fractures or other trauma, or when compressed due to muscle spasm of the cervical muscular along its course.[20]

Damage to the axillary nerve and its cutaneous branch can present in anterior shoulder dislocation or surgical neck of the humerus fractures.[13]

Damage to the musculocutaneous nerve is relatively uncommon but can occur with direct trauma such as a stab wound along its course – most often as it passes through the axilla. It can also incur damage during a deltopectoral surgical approach.[21]

The radial nerve is particularly disposed to in compression type injuries and humerus fractures due to its proximity to the humerus as it passes through the arm. Fractures to the humerus can cause severe injury requiring repair. It can also suffer an injury due to improper and prolonged use of crutches causing continued pressure on the medial side of the arm or axilla.[3]

There are multiple sites of compression for the ulnar nerve, which can complicate its diagnosis. From proximal to distal, ulnar nerve compression can occur at the anterior scalene muscles, pectoralis minor muscle, the arcade of Struthers just proximal to the elbow, flexor carpi ulnaris, or as it passes through the tunnel of Guyon. At the elbow, a clinical scenario may be prolonged leaning on the elbow or overuse injuries from exercising. At the wrist, resting of the ulnar side of the wrist during prolonged typing, ganglion cyst formation, or repetitive use of a hammer can cause damage to the nerve.[23][24]

These purely sensory nerves are rarely associated with specific pathology but suffer damage from direct trauma.

Commonly injured during mastectomies or axillary lymph node dissection secondary to breast cancer. Even if it is not injured directly during surgery, post-surgical scar tissue formation can cause compression. Surgeons sometimes harvest this nerve as a donor nerve graft.[25]

The nerve roots that supply the shoulder and upper limb can directly be affected by pathology around the spine in cases of severe osteoarthritis, degenerative disk disease, or ruptured disk. The pattern of sensory changes is observable at the locations noted above in the Structure and Function section. Sensory lesions from the nerve roots can be distinguished from distal pathology due to the pattern of sensory distribution, although it can be difficult, especially in cases where multiple nerve roots are affected.

Two characteristic conditions associated with brachial plexus injury are Erb's palsy and Klumpke's palsy. The sensory pattern of distribution is typical to the dermatome associated with the nerve roots. 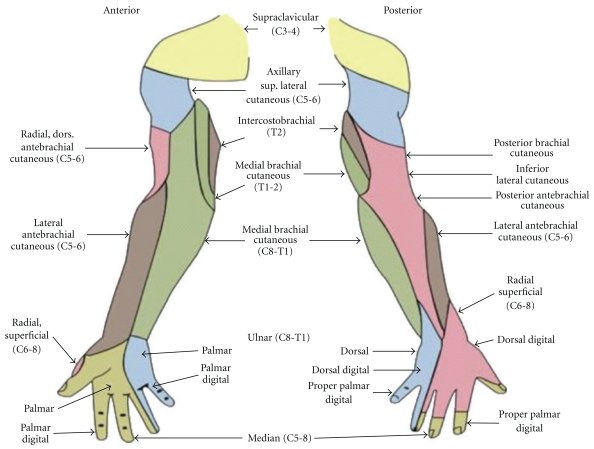 Nathe T,Tseng S,Yoo B, The anatomy of the supraclavicular nerve during surgical approach to the clavicular shaft. Clinical orthopaedics and related research. 2011 Mar;     [PubMed PMID: 20936387]