The bony pelvis is held together with the support of the 3 vertebropelvic ligaments.

These ligaments, amongst others, provide critical, structural support and connection of various tissues in and around the pelvis.

The iliolumbar ligament is composed of thick and strong fibrous bands of connective tissue originating from the tip of the transverse process of the fifth lumbar vertebra and stretching out to the posterior part of the inner lip of the iliac crest. They stabilize and strengthen the lumbosacral joint. The Iliolumbar ligaments also restrict the rotational movement at the lumbosacral joint. The anterior sacroiliac ligament is a band of connective tissue that connects the anterior surface of the lateral part of the sacrum to the margin of the auricular surface of the ilium. The posterior sacroiliac ligament is situated in a deep depression between the sacrum and rear ilium.[1][2][3][4][5]

The sacrotuberous ligament is a fan-shaped fibrous band of connective tissue. It runs from the sacrum and the upper coccyx to the tuberosity of the ischial tuberosity in the human pelvis.

Ligaments Related to the Ovary

There are two ligaments that are attached to the ovary, namely the (median) ovarian ligament and the suspensory ligament of the ovary. The (median) ovarian ligament is a fibrous band of connective tissue attached to the ovary inferiorly and extends medially to the fundus of the uterus below the attachment of the fallopian tube. The Suspensory Ligament of the ovary is composed of the peritoneal fold extending from the ovary to the lateral pelvic wall. It is not a true ligament. It blends with the broad ligament fold and contains the ovarian artery, ovarian vein, ovarian nerve plexus, and lymphatic vessels.

Other ligaments of the pelvis include the pubovesical ligaments, puboprostatic ligaments, sacrogenital, urachus ligament, and suspensory ligament of the penis in males.

Male and female gonads develop from primitive germ cells from the mesothelium of the posterior abdominal wall. Gonadal development begins in the fifth fetal week. The broad ligaments are formed after the fusion of both of the müllerian ducts. The müllerian ducts eventually canalize and become the uterus, bilateral fallopian tubes, and cervix uteri. The round ligament and medial ovarian ligaments develop from the embryonic gubernaculum. Agenesis, aplasia, or failure of fusion of the müllerian ducts can lead to primary amenorrhea and associated genitourinary abnormalities. Some examples of genitourinary abnormalities are, but not limited to: ectopic or absent ureters, unilateral renal agenesis, or bicornuate uterus.[6]

The most common causes of lower back pain (LBP) are musculo-ligamentous sprains and strains, which occur mainly in the lumbosacral region. Injury and damage may happen to these lumbosacral ligaments because of falls, violent accidents, and other trauma to the region. Lumbosacral sprains usually occur after a forceful or rapid movement which may cause a tear of the lumbosacral ligaments. Too much movement (hypermobility or instability) or too little movement (hypomobility or fixation) may cause or aggravate sacroiliac joint pain. Rest from the weight-bearing activities is advised in all cases of injury. Ice and cold compressions are recommended to reduce inflammation and pain. Local massage, anti-inflammatory medications, and physiotherapy may be helpful. In case of persistent symptoms, medical evaluation is recommended.[7][8][9][10]

Lumbar radiculopathy may result from nerve irritation by the damaged discs between these vertebrae. Traumatic injury and damage due to wear and tear may worsen these symptoms. Lumbosacral pain usually increases with movements at the waist and increase with coughing or sneezing. CT and MRI may be helpful imaging studies in the differential diagnosis. Nerve testing by electromyogram (EMG) and nerve conduction velocity (NCV) of the lower extremities may be used to evaluate nerve injury in this area.

In female patients, weakness of pelvic ligaments due to stretching and tearing during pregnancy may lead to pelvic organ prolapse. Prolonged labor may further lead to injury to the pelvic floor. Consequently, female patients may develop cystocele, urethrocele, cystourethrocele, enterocele, rectocele, and prolapse of the uterus into the vagina. In asymptomatic patients, conservative management is recommended. Conservative management includes vaginal pessaries and Kegel’s exercises. In symptomatic patients, if conservative management fails, surgery is performed for correction of defects and the relief of these symptoms. Sacrospinous ligament fixation may be used to anchor the vaginal vault, to aid in preventing vaginal vault prolapse. 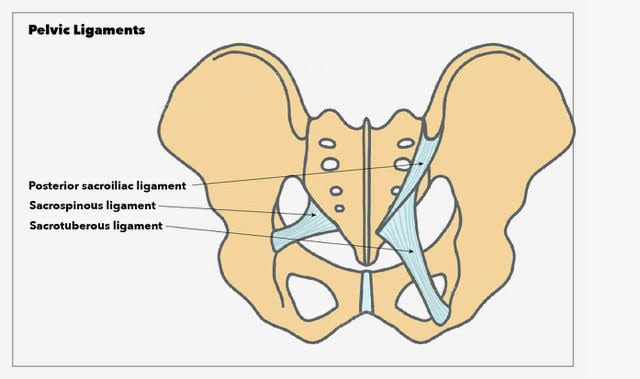