The function of the cervical plexus is to provide a network of branches that give sensory and muscular innervation to structures within the head, neck, and trunk. Some branches also receive contributions from cranial nerves as they innervate their corresponding tissues. The cervical plexus is more specifically two separate plexuses, one superficial, and the other deep. The superficial plexus is made up of the lateral terminal branches which turn into loops that give the sensory branches of the cervical plexus and become the great auricular nerve, the external acoustic meatus, the transverse cervical nerve, the lesser occipital and supraclavicular nerves. The deep plexus then becomes the muscular branches which include the ansa cervicalis, the phrenic nerve, and various segmental branches.[1]

The ventral roots of the spinal nerves are derived originally from the mantle layer of the neural tube. The processes from the neuroblasts in this mantle layer assemble into rootlets that exit in a continuous longitudinal series on the ventrolateral border of the neural tube. The direction taken by the ventral root fibers as they emerge from the tube varies according to the size and position of the ganglion crest. The superficial cervical plexus originally forms by the anterior branch fusion of C2 andC3 which forms the descendens cervicalis; this then unites in a loop with the hypoglossal nerve and together with the first cervical nerve, is incorporated into the plexus. The deep plexus is made up of the lateral terminal branches.[2] While the development of the cervical plexus is a complex process, there has been one major branch of the deep cervical plexus accurately detailed during development, this being the phrenic nerve. During development, the diaphragm develops near the newly developing nerves. Some literature describes the phrenic nerve developing directly ventral to the diaphragm during development. As the fetus continues to grow, the points of origin and insertion of the phrenic nerve draw gradually apart due to the descent of the diaphragm and the elevation of the cervical nerves as it accompanies the development of other structures in the neck.[3]

The cervical plexus lies deep to the internal jugular vein and the sternocleidomastoid muscle and on the surface of the scalenus medius and levator scapulae muscle. The nerves are also located laterally to the transverse processes between prevertebral muscles on the medial side and other vertebral muscles from the lateral side. The primary rami, besides C1, divides into two. C1 joins the upper branch of C2, and the adjacent upper and lower branches of C2 and C3, as well as C3 and C4, fuse. The lower branch of C4 joins C5 and contributes to the brachial plexus. The branches emerge from the posterior border of the sternocleidomastoid muscle.[5]

The muscular branches pass deeply from the plexus to supply the rhomboids, the serratus anterior, the sternocleidomastoid, the trapezius, levator scapulae, and the scalenus medius. There are also branches that supply the muscles of the suboccipital triangle.

The phrenic nerve deserves careful consideration due to its motor, sensory, and sympathetic nerve fibers to the diaphragm. It originates at the lateral border of the scalenus anterior at the level of the upper border of the thoracic cavity and passes anterior to the subclavian artery.[8]

Cervical plexus blocks are commonly used in this region to promote anesthesia and regional pain block for surgical procedures in the neck region. Such procedures include cervical fat pad biopsy, lymph node biopsy, or other superficial surgical procedures in the neck.  If done correctly, this type of block produces anesthesia over the neck, occipital region, the shoulder region, and the upper pectoral region. Firstly, to achieve this nerve block correctly, it is necessary to inject an analgesic solution subcutaneously around the midpoint of the posterior border of the sternocleidomastoid. It is through this anesthetized skin that the areas lateral to the transverse processes of the second, third, and fourth cervical vertebrae should be infiltrated. Avoiding intrathecal and intravascular injection during this approach is essential. One case study also reported injections into the phrenic and vagus nerves while another showed a Horner syndrome following this procedure.[9]

If more radical surgical interventions are required, such as dissections of the neck, excision of masses, thyroglossal cysts, operations on the trachea and larynx and even carotid endarterectomy, then local anesthetic must be administered under the carotid sheath. This injection must be under the adventitia of the carotid bifurcation and into the superior angle of the incision. Unfortunately, thyroidectomies are usually not performed using this method as the bilateral blockade gives a choking sensation to the patient and the potential for a bilateral phrenic blockade.[10]

The triangles of the neck are commonly an interest to various surgical subspecialties. Of the triangles of the neck, the posterior triangle is the location of the posterior cervical plexus. It is vital for professional medical staff to be familiar with these structures and their respective functions. Ultrasound is used to identify the cervical plexus during such nerve blocks. As noted above, the most common indications for these blocks is a carotid endarterectomy and also superficial neck surgery. 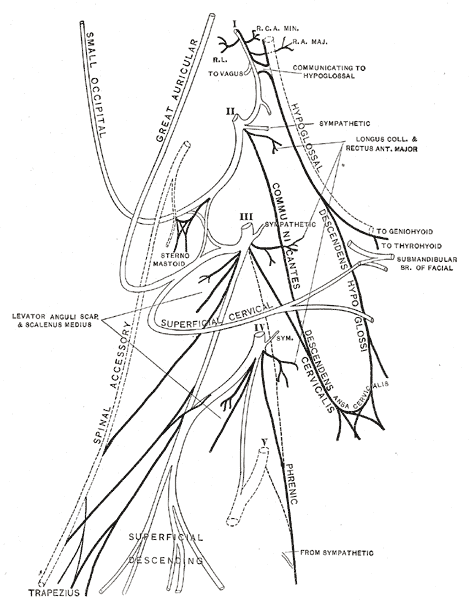 The Anterior Divisions, Plan of the cervical plexus
Contributed by Gray's Anatomy Plates 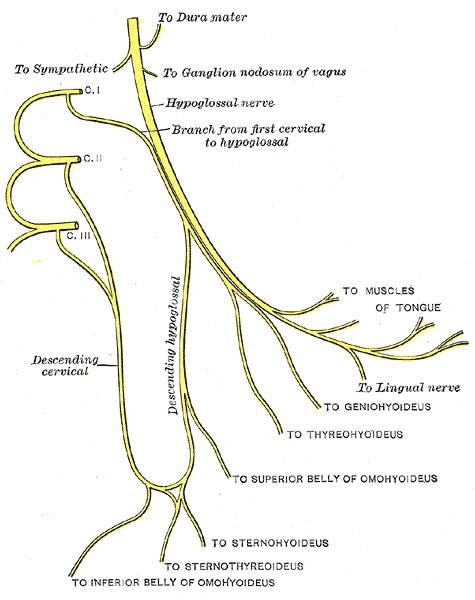 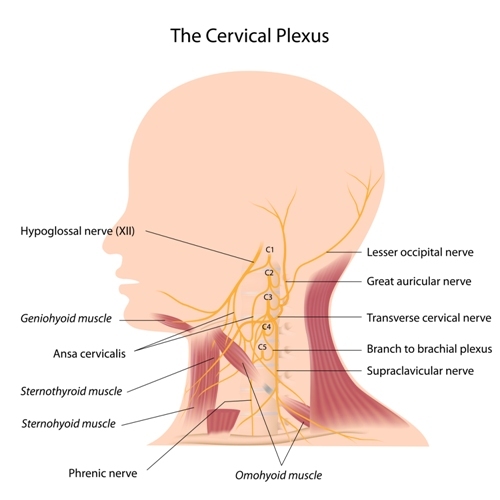