The arytenoid cartilages are paired pyramid-shaped structures of cartilage found in the larynx, which are essential to the production of vocal sound. They are located on the lateral part of the superior border of the lamina of the cricoid cartilage and help form the cricoarytenoid joints. The arytenoid has the apex directed cranially where the corniculate cartilage is sitting. The apex gives attachment to the aryepiglottic fold, while the base articulates with the cricoid cartilage lamina by the cricoarytenoid synovial. Each arytenoid has three surfaces (medial, posterior, and anterolateral) and two processes originating from the base. The thin anterior process (vocal process) gives attachment to the vocal ligament, which in turn, supports the medial edge of the vocal fold. The thick lateral process (muscular process) is the point of attachment of the thyroarytenoid and cricoarytenoid (lateral and posterior) muscles. The posterior curved surface receives the fibers of the interarytenoid muscles (transverse and oblique), while the medial surface is flat, smooth and covered by the mucosa that constitutes the lateral border of the posterior (intercartilaginous) part of the glottis. The anterolateral surface gives strong attachments to the thyroarytenoid muscle near the base and is attached to the vestibular ligament near its apex.[1][2][3]

The larynx begins to form around the fourth week of development as an outpouching of the ventral wall of the primitive pharynx called laryngotracheal groove (or foregut). The development follows a craniocaudal progression, with the more superior thyroid cartilage arising from the fourth branchial arch, and the more caudal cricoid cartilage arising from the sixth branchial arch. The cartilaginous tissues from the fourth and sixth branchial arches merge and form the arytenoid, thyroid, cricoid, corniculate, and cuneiform cartilages, except the epiglottis which comes from the third arch. The fifth branchial arch may play a role in the origin of the arytenoid and corniculate cartilages, but due to its rapid degeneration during the human development, its function is still unclear. The laryngeal cartilages, including the epiglottis, originate from the mesenchymal tissue adjacent to both the entoderm and endoderm. In this tissue, small foci of cells show a trend towards chondroitic differentiation. The complete confluence of these foci and the formation of the definitive cartilages occur mostly postnatally. Arytenoid cartilages are of hyaline type (except the vocal processes) as well as thyroid and cricoid cartilages; the other cartilages consist of elastic cartilage. Hyaline cartilages tend to ossify after the age of 18 years, earlier in men than in women. In contrast to hyaline cartilages, ossification does not occur in elastic cartilages.

Arytenoid sclerosis may be seen on a CT scan as a normal variant in 13% of symptom-free patients who do not have laryngeal carcinoma. This finding is more common in women than in men, and there is a left-side predominance.

Endoscopic arytenoidectomy with or without cordectomy became the most accepted intervention for the permanent bilateral vocal cord paralysis at the end of the 20th Century to enlarge the stenotic airway and practically replaced the external surgical methods. Removal of arytenoid cartilage (i.e., arytenoidectomy) is a permanent and irreversible surgical procedure, by which the glottal inlet is expanded in its transverse axis, providing a larger airway for respiration.

Laterofixation of the arytenoid and/or the attached vocal fold has emerged as an alternative surgical approach for permanent bilateral vocal cord paralysis with good success rates. Due to its reversible nature, laterofixation has greater success than other conventional surgical options based on the fact that it enlarges the airway avoiding damage to the voicing mechanism of the larynx, thus preserving the physiologic adductor functions (vocalization and deglutition) by reversal of the procedure.

Arytenoid cartilage mounted on the cricoid ring, with a functioning recurrent laryngeal nerve and lateral and posterior cricoarytenoid muscles form the cricoarytenoid unit a basic functional unit critical to phonatory and sphincteric functions of the larynx. According to this concept, surgeons should pay attention to the management of laryngeal cancer for the organ preservation; they should be able to maintain physiological functions of the larynx, namely speech, respiration, and swallowing, without compromising the loco-regional control of cancer.

Laryngeal contact granuloma is a common disorder that occurs on the medial surface of the arytenoid cartilage, precisely, around the vocal process. It is currently believed to be primarily caused by gastroesophageal or laryngopharyngeal reflux, intubation injury, and vocal cord abuse or misuse. This anatomic segment is particularly prone to being irritated and then responding with the exaggerated healing that produces inflammatory granulation tissue. Hence, most granulomas occur in this location.[8]

Anterior or posterior arytenoid dislocation subsequent to intubation is repeatedly reported in anesthetic practice. The arytenoids and cricoarytenoid joint are relatively fragile and vulnerable to injury during laryngoscopy. This can result in one of the most frequent post-anesthetic complaints, hoarseness, and also one of the most serious, airway compromise. The diagnosis of arytenoid cartilage dislocation should be considered in all cases of vocal fold hypomobility and immobility using videostroboscopy or even a CT exam to allow an early diagnosis and treatment to reestablish or improve joint mobility.

Erythema of the mucosa over the arytenoid cartilages is a common finding during laryngoscopy often related to chronic inflammatory changes, especially the laryngopharyngeal reflux. However, this finding alone tends to render the diagnosis of laryngopharyngeal reflux doubtful because it can vary based on the light source, endoscope type, and video monitor used.

Cricoarytenoid arthritis (CA) occurs as a systemic manifestation of rheumatoid arthritis.  Symptoms of CA include pharyngeal fullness when swallowing and speaking, hoarseness, and dyspnea. It can be a cause of recurrent upper airway obstruction in rheumatoid arthritis. On endolaryngoscopy, adducted vocals cords are a significant finding. The laryngoscopic findings include myositis of the intrinsic laryngeal muscles, mucosal edema, hyperemia, swelling and inflammation of the interarytenoid mucosa, arytenoids, and aryepiglottic folds and epiglottis, and immobility of the cricoarytenoid joint. [9] The cricoarytenoid joint can also be affected in dermatomyositis [10].  Thus, pathology of the cricoarytenoid can be a sign of underlying systemic disease.

Additionally, arytenoid chondritis develops following trauma to the mucosa of the arytenoid cartilage or due to invasion of bacteria into the cartilage. [11] 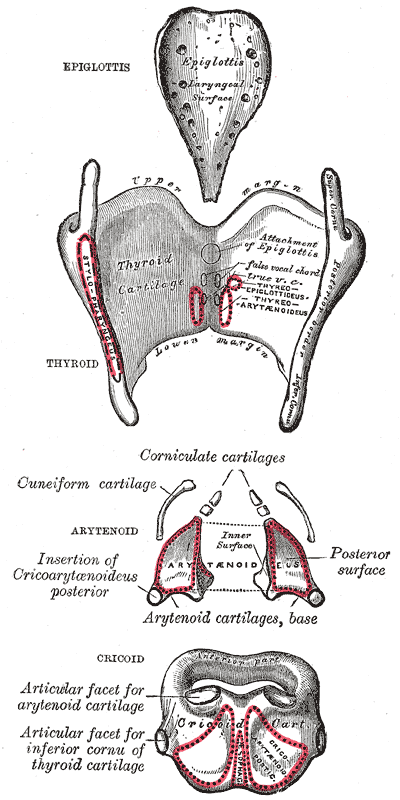 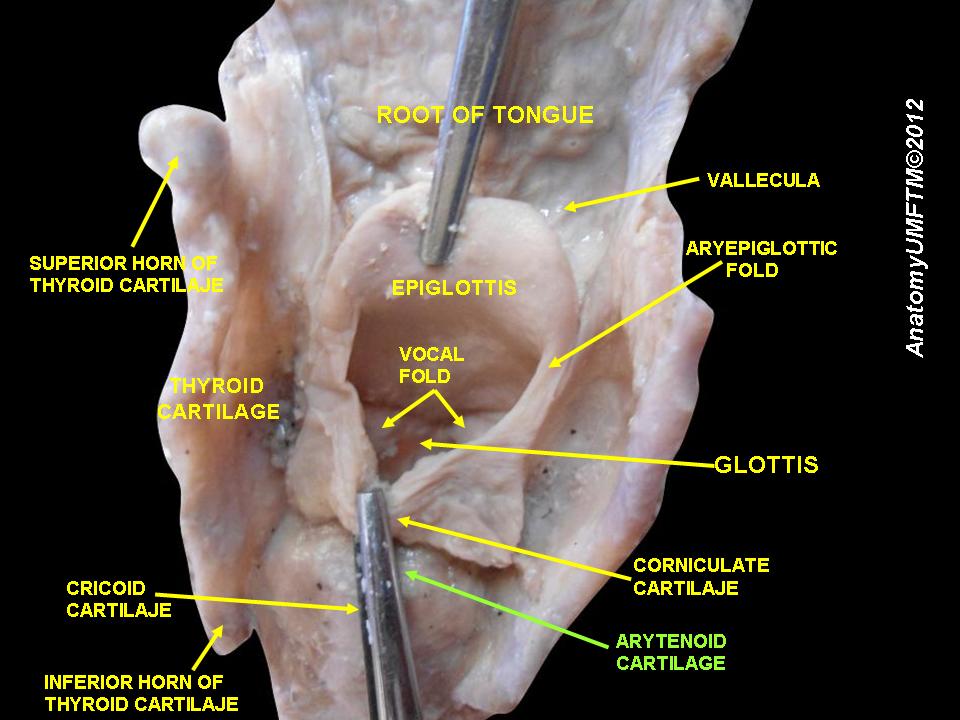 The arytenoid cartilage in relation to the larynx.
Contributed from Wikimedia User: Anatomist90 (CC BY-SA 3.0 https://creativecommons.org/licenses/by-sa/3.0/deed.en) 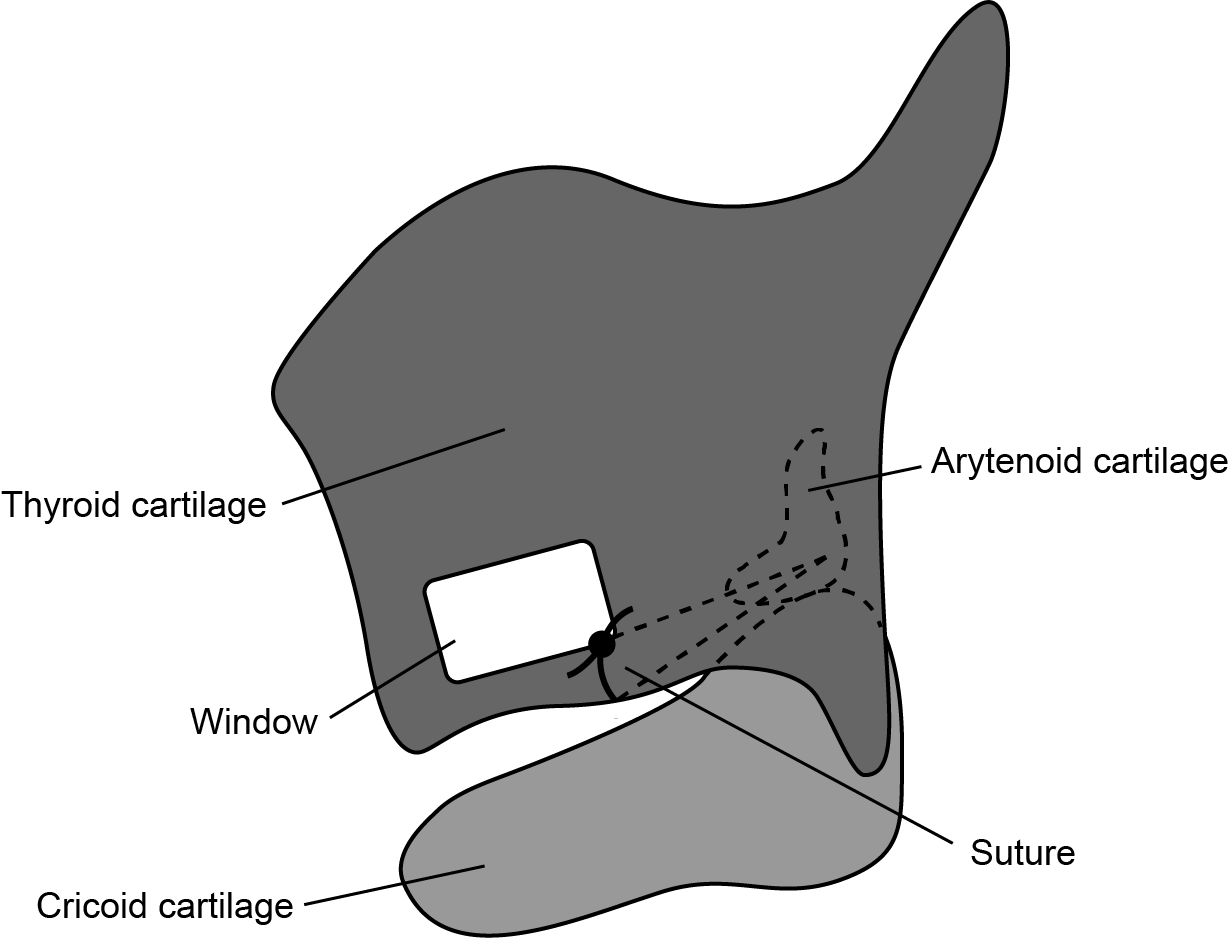