Smooth muscle differs from skeletal muscle in a variety of ways, perhaps the most important being its ability to be contracted and controlled involuntarily. The nervous system can use smooth muscle to tightly regulate many of the bodies subsystems for life with no thought from the user. A person does not need to think about their blood pressure for it to adapt to increasing oxygen demands from exercise. The nervous system instead uses hormones, neurotransmitters, and other receptors to control smooth muscle spontaneously.

Smooth muscle differs from skeletal muscle in function. Unlike skeletal muscle, smooth muscle is capable of maintaining tone for extended periods and often contracts involuntarily. At a cellular level, smooth muscle can be described as an involuntary, non-striated muscle. Smooth muscle consists of thick and thin filaments that are not arranged into sarcomeres giving it a non-striated pattern. On microscopic examination, it will appear homogenous. Smooth muscle cytoplasm contains a large amount of actin and myosin. Actin and myosin act as the main proteins involved in muscle contraction. Actin filaments attach to dense bodies that are spread throughout the cell. Dense bodies can be observed under an electron microscope and appear dark. Another important structure is the calcium-containing sarcoplasmic reticulum which aids in sustaining contraction. The shape of the smooth muscle is described as fusiform, which is described as being round in the center and tapering at each end. Smooth muscle can tense and relax but has greater elastic properties than striated muscle. This is important in organ systems like the urinary bladder where contractile tone must be preserved.

Due to smooth muscles' widespread presence throughout the body, blood supply and lymphatic contributions vary by region. Almost every artery in the body supplies blood to smooth muscle whether that is in the form of endothelial smooth muscle located directly in the artery or smooth muscle within an organ system such as arteries of the gastrointestinal tract. It becomes more important to recognize how smooth muscles impact blood supply themselves. For example, within the cardiovascular system, smooth muscle helps to regulate blood flow by controlling the diameter of the vessel. As previously discussed vascular pathologies of smooth muscle can have devasting effects on the body and lead to significant pathology. Atherosclerosis once thought to be only a function of hemodynamics and vessel structure has more recently been shown to be linked as well to smooth muscle development.[4] Research has even shown that continuous vascular smooth muscle activation can lead to the formation of pulmonary hypertension.[6] Within the lungs, pathologic activation of smooth muscle can lead to the development of asthma. Asthma occurs when smooth muscle constriction leads to obstruction of the airway. Recent studies have shown that the smooth muscle layer may be increased in thickness before the onset of asthma even occurs, from which a genetic link may be derived.[7]

Ultimately innervation from the autonomic nervous system leads to a calcium release in smooth muscle tissue. Smooth muscle contraction is dependent on calcium influx. Calcium is increased within the smooth muscle cell through two different processes. First depolarization, hormones, or neurotransmitters cause calcium to enter the cell through L-type channels located in the caveolae of the membrane. Intracellular calcium then stimulates the release of calcium from the sarcoplasmic reticulum (SR) by way of ryanodine receptors and IP3, this process is referred to as calcium-induced calcium release.[10] Unlike skeletal muscle, smooth muscle calcium release from the sarcoplasmic reticulum is not physically coupled to the ryanodine receptor. Once calcium has entered the cell it is free to bind calmodulin, which transforms into activated calmodulin. Calmodulin then activates the enzyme myosin light chain kinase (MLCK), MLCK then phosphorylates a regulatory light chain on myosin. Once phosphorylation has occurred a conformational change takes place in the myosin head, this increases myosin ATPase activity which promotes interaction between the myosin head and actin. Cross-bridge cycling then occurs, and tension is generated. The tension generated is relative to the amount of calcium concentration within the cell. ATPase activity is much lower in smooth muscle than it is in skeletal muscle. This factor leads to the much slower cycling speed of smooth muscle. However, the longer period of contraction leads to a potentially greater force of contraction in smooth muscle. Smooth muscle contraction is enhanced even further through the use of connexins. Connexins allow for intercellular communication by allowing calcium and other molecules to flow to neighboring smooth muscle cells. This action allows for rapid communication between cells and a smooth contraction pattern.

Smooth muscle can be found in all the organ systems below:

Due to autonomic control regulatory effects of smooth muscle, every surgery will be impacted by its overall function. Monitoring a patient's vital signs during surgery is paramount to a successful procedure and the stressors of surgery can have a vast impact on the autonomic nervous system which is responsible for regulating smooth muscle contraction. Surgery can even be targeted at modifying the function of smooth muscle as in the case of a vagotomy. Overstimulation of the vagus nerve has been speculated to be a possible cause for peptic ulcer disease, vagotomy is a classical surgical procedure that aims at treating this disorder by removing the vagus nerve at the level of the stomach and thus removing stimulation. However, this procedure has fallen out of favor recently due to advancements in medical therapy for peptic ulcer disease but may still show some benefit in certain patients.[12] Another example is the treatment of certain neuroendocrine tumors like an adrenal pheochromocytoma which has the potential to cause cardiovascular complications during surgery by releasing excess catecholamines. Proper management requires an in-depth knowledge of how alpha and beta blockades will affect smooth muscle and the downstream effects of those changes on bodily functions.[13] Due to its regulatory control effects, sufficient knowledge of the function and impact of smooth muscle contraction on the body systems becomes paramount when preparing for and performing any surgery.

It is estimated that in the year 2013 health care costs associated with asthma reached $81.9 billion in the United States.[14] With such a large health care burden it is astonishing to realize that asthma results from something as simple as smooth muscle contraction. Smooth muscle is an integral part of the human body, its function is required for life and can be found in almost every organ system. In the cardiovascular system, smooth muscle is used in vessels to maintain blood pressure and flow, in the lungs it opens and closes airways, in the gastrointestinal system it plays a role in motility and nutrition collection and yet it still serves a purpose in almost every other organ system as well. The wide distribution of smooth muscle throughout the body and its many unique properties make it imperative for medical professionals to have an in-depth understanding of its anatomy, physiology, function, and disease applications.

From a functional aspect, smooth muscle physiology is responsible for maintaining and preserving every vital sign. Regardless of whether a patient presents with an acute emergent disease or a chronic disease, it is likely that smooth muscle has played some role in its development. In an acute setting, many life-saving therapies directly target smooth muscle. In these settings, a firm foundation and understanding of smooth muscle will help health professionals save lives. An even broader understanding of smooth muscle will help clinicians to increase the quality of life of their patients. As part of the biopsychosocial model, it is also important to take into consideration the psycho-social factors that may be overlooked with the diseases of smooth muscle, for example, a patient diagnosed with neurogenic bladder disease may become socially isolated to avoid the embarrassment associated with their disease state. When approaching smooth muscle dysfunction, it is important for healthcare providers to appreciate the many facets of how the disease will impact their patients.

As with all aspects of medicine, a continuing amount of research will likely change our future understanding of smooth muscle and its overall effects on disease. Current research into smooth muscle has shown promise in future implications such as restoring endothelial tissue which in the future could lead to new ways to encourage revascularization. Even small changes in understanding like this could have an astronomical impact in the treatment and mortality of cardiovascular disease in the future.[4] While smooth muscle remains an exceptionally deep topic, a solid understanding of its impact on healthcare even at the most basic level will give healthcare professionals tools to provide better healthcare outcomes now and into the future.

Smooth muscle anatomy, physiology, and function remain a broad and relatively illusive topic despite the amount of funding and research efforts put into understanding it. As more time and effort is put into understanding smooth muscle our ability to treat the pathophysiology that comes with its dysfunction will broaden. It is important the clinicians continue to learn and study the impact that smooth muscle can have. As discussed, future methods may involve stimulating the regrowth of tissue with smooth muscle modulating factors. It is not inappropriate to think that many advances in the future of medical management will focus on impacting smooth muscle in some way or another. 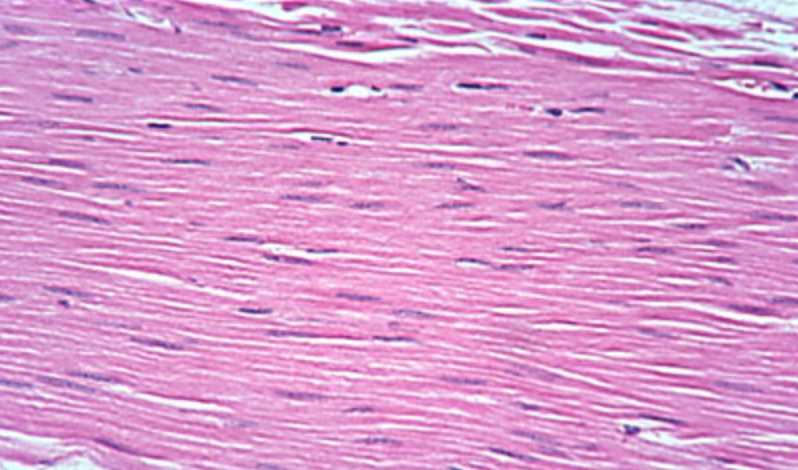