Cardiac muscle (or myocardium) makes up the thick middle layer of the heart. It is one of three types of muscle in the body, along with skeletal and smooth muscle. The myocardium is surrounded by a thin outer layer called the epicardium (AKA visceral pericardium) and an inner endocardium. Coronary arteries supply to the cardiac muscle, and cardiac veins drain this blood. Cardiomyocytes are the individual cells that make up the cardiac muscle. The primary function of cardiomyocytes is to contract, which generates the pressure needed to pump blood through the circulatory system.[1]

Rapid, involuntary contraction and relaxation of the cardiac muscle are vital for pumping blood throughout the cardiovascular system. To accomplish this, the structure of cardiac muscle has distinct features that allow it to contract in a coordinated fashion and resist fatigue.

The individual cardiac muscle cell (cardiomyocyte) is a tubular structure composed of chains of myofibrils, which are rod-like units within the cell. The myofibrils consist of repeating sections of sarcomeres, which are the fundamental contractile units of the muscle cells. Sarcomeres are composed of long proteins that organize into thick and thin filaments, called myofilaments. Thin myofilaments contain the protein actin, and thick myofilaments contain the protein myosin. The myofilaments slide past each other as the muscle contracts and relaxes. This process activates from the release of calcium from the sarcoplasmic reticulum (SR) when delivering an action potential to the muscle, in a process called excitation-contraction coupling. The sliding of actin and myosin past each other produces the formation of “cross-bridges,” which causes contraction of the heart and generation of force.

Cardiomyocytes are rectangular, branching cells that typically contain only one centrally-located nucleus.[2] This arrangement contrasts with skeletal muscle cells, which often contain many nuclei. Cardiomyocytes contain many mitochondria to produce large amounts of adenosine triphosphate (ATP) and myoglobin to store oxygen to meet the demands of muscle contraction.

Like skeletal muscle, the organization of thin and thick myofilaments overlapping within the sarcomere of the cell produces a striated appearance when viewed on microscopy. This characteristic appearance consists of thick dark-colored A-bands (mainly composed of myosin) with a relatively bright H-zone in the center, and lighter colored I-bands (mainly actin) with a dark central Z line (also known as Z disc) connecting the actin filaments.

The outside of the cardiomyocyte is surrounded by a plasma membrane called the sarcolemma that acts as a barrier between extracellular and intracellular contents. Invaginations of the sarcolemma into the cytoplasm of the cardiomyocyte are called T-tubules, and they contain numerous proteins like L-type calcium channels, sodium-calcium exchangers, calcium ATPases, and beta-adrenergic receptors that allow for the exchange of ions with extracellular fluid surrounding the cell. At the Z-line of the cardiomyocyte, T-tubules run adjacent to enlarged areas of the sarcoplasmic reticulum known as the terminal cisternae, and the combination of a single T-tubule with one terminal cisterna referred to as a diad. This configuration contrasts with skeletal muscle, which combines 2 terminal cisternae with 1 T-tubule to form “triads,” which appear at the A-I junction.[3]

Neighboring cardiomyocytes are joined together at their ends by intercalated disks to create a syncytium of cardiac cells. Within the intercalated disc, there are three different types of cell junctions: fascia adherens, desmosomes, and gap junctions. The transverse side of the intercalated discs runs perpendicular to the muscle fibers at the Z lines and provides a structural component via fascia adherens and desmosome connections. The lateral side of the discs contains gap junctions that permit intercellular communication by allowing ions from one cardiomyocyte to move to a neighboring cell without having to be excreted into the extracellular space first. The low resistance of the gap junctions allows depolarization to spread quickly throughout the syncytium, which facilitates the rapid transmission of action potentials to produce a synchronized contraction of the cardiomyocytes in unison.[4]

One other distinct feature of cardiac muscle fibers is that they have their own auto rhythmicity. Unlike smooth or skeletal muscle which require neural input for contraction, cardiac fibers have their own pacemaker cells like the sinoatrial (SA) node that spontaneously depolarizes. These depolarizations occur at a consistent pace, but the pacemaker cells can also receive input from the autonomic nervous system to decrease or increase the heart rate depending on the requirements of the body.

The myocardial action potential occurs in five steps, beginning with rapid depolarization during Phase 0, followed by initial partial repolarization during Phase 1, a plateau period of Phase 2, then a rapid repolarization during Phase 3, leading to stabilization at the resting potential during Phase 4. Phase 2 plateau is a unique feature of the myocardial action potential that is not present in skeletal muscle. It is caused by balancing the effects of potassium efflux from the cell with an influx of calcium through voltage-gated L-type calcium channels (AKA dihydropyridine receptor) on the cell’s surface. This influx of calcium is relatively small and insufficient to cause contraction by itself. Still, it triggers the sarcoplasmic reticulum to release its stores of calcium into the myoplasm of the myocyte in a process called calcium-triggered-calcium-release. The calcium can then bind to troponin on the thin filament and begin the process of myocyte contraction seen with each heartbeat.[4]

The concentration of calcium in the myocyte is the critical factor that determines how much force is generated with each contraction. Cardiac muscle cells can increase contractility through beta-1 adrenergic receptors on the surface with a Gs G-protein. When stimulated by either the sympathetic nervous system or beta-1 agonist drugs, the Gs activate the enzyme adenylyl cyclase, which converts ATP to cAMP. Intracellular cAMP increases the activity of protein kinase A (PKA), which then phosphorylate calcium channels permitting more calcium to enter the cell, leading to increased contraction.

The regulatory protein phospholamban can control the rate at which the SERCA pumps calcium into the SR. Phospholamban reduces the transfer of calcium by the SERCA (sarcoplasmic reticulum Ca2+ ATPase) when bound together. Just as it can increase contractility, the sympathetic nervous system can also increase lusitropy through beta-1 adrenergic stimulation by phosphorylation of phospholamban with cAMP-dependent protein kinase (PKA). When phosphorylated, the phospholamban ceases inhibition of the SERCA, allowing it to increase the rate of calcium intake and relaxation of the cardiac muscle.[3]

The heart is one of the first organs to develop in utero. The visceral splanchnic mesoderm surrounding the heart tube gives rise to the cardiac muscle. Following gastrulation, mesodermal cells intercalate between the ectoderm and endoderm germ layers of the primitive streak, where signals from surrounding tissue promote cardiac progenitor cells to grow in the lateral plate mesoderm of the developing primitive streak.[5] Cardiac development occurs between the second and seventh weeks of gestation.

The process of contraction and relaxation requires a constant supply of oxygen and nutrients to meet the energy demands of cardiac muscle. Blood supply is delivered to the myocardium by coronary arteries, which are the first branches of the aortic root. Blood is drained away by the cardiac veins through the coronary sinus into the right atrium. There are left and right coronary arteries. The right coronary artery (RCA) arises from the right aortic sinus and supplies the right ventricle and the bundle of His. In 85% of the people (right dominance), it gives a branch known as the posterior descending artery (PDA), which supplies the AV node, posteromedial papillary muscle, and posterior portion of the interventricular septum and the ventricles. The left main coronary artery arises from the left aortic sinus. It branches off to give the left circumflex coronary artery (LCX) and the left anterior descending artery (LAD). The LCX supplies the lateral and posterior walls of the left ventricle, SA node, AV node, and anterolateral part of the papillary muscle. The LAD supplies the anterior part of the interventricular septum and anterior surface of the left ventricle.

The autonomic nervous system (ANS) is a significant regulator of contractility, heart rate, stroke volume, and cardiac output. Parasympathetic innervation is provided from the right and left vagus nerves (CN X). Sympathetic innervation comes from fibers of the sympathetic trunk arising from the upper segments of the thoracic spinal cord.[7] Afferent nerves also provide the central nervous system with feedback on blood pressure, blood chemistry, and to relay pain sensation from the heart.

Cardiac muscle makes up the thick middle layer of the heart and is surrounded by a thin outer layer called the epicardium or visceral pericardium and an inner endocardium.

Cardiopulmonary bypass is a technique used in cardiac surgery to suspend contractions of the cardiac muscle while maintaining perfusion of blood and oxygen to the organs and tissues of the body during an operation. Currently, the cardiac surgeon tries to use less invasive techniques. For example, replacing the median sternotomy with a lateral or inferior mini-thoracotomy. A cardiac surgery, due to induced hypothermia, can cause iatrogenic damage to the phrenic nerve (right and left), which passes under the pericardium. These lesions are transient, and only in a small percentage of patients, the damage will be permanent with an over-elevation of the diaphragmatic portion (especially on the left).[9]

Diseases affecting cardiac muscle have a tremendous impact on health worldwide, with ischemic heart disease being the leading cause of morbidity and mortality in the world (as measured by disability-adjusted life-years, DALYs).[10] Ischemic heart disease characteristically demonstrates an imbalance between the supply and demand of oxygenated blood for cardiac tissue. This condition commonly occurs when the blood supply to the heart tissue is diminished, such as in coronary artery atherosclerosis, where an atherosclerotic plaque obstructs the lumen of a major epicardial artery and potentially a superimposed thrombosis. Ischemic syndromes include angina pectoris, acute myocardial infarction, and sudden cardiac death. Damage to the myocardium from ischemia leads to irreversible loss of cardiac function.

Mutations in the gene that produces phospholamban are a cause of inherited human dilated cardiomyopathy with refractory congestive heart failure.[11] Mutations in troponin are associated with hypertrophic, dilated, and restrictive cardiomyopathies.[12] A mutation of the lamin A/C gene (LMNA) gene can cause cardiomyopathy.[13] 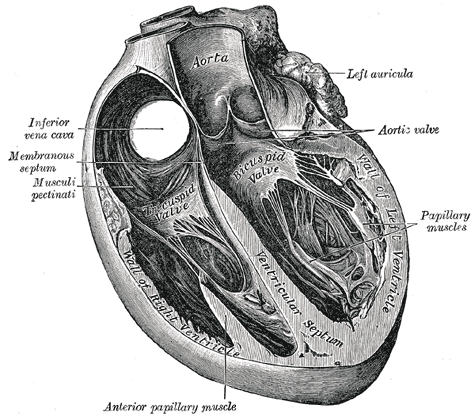 Willott RH,Gomes AV,Chang AN,Parvatiyar MS,Pinto JR,Potter JD, Mutations in Troponin that cause HCM, DCM AND RCM: what can we learn about thin filament function? Journal of molecular and cellular cardiology. 2010 May     [PubMed PMID: 19914256]