The venous drainage of the foot involves several vessels, including the plantar and dorsal venous arches, the great saphenous vein, and the small saphenous vein. Similarly to what takes place in the hand, the plantar and dorsal venous arches of the foot have digital veins that extend between each toe and drain into the arches. The foot also contains large medial and lateral plantar veins that eventually join posteriorly to form the deep tibial veins and anteriorly form the anterior tibial veins. These veins contribute to the plantar pump, a physiological mechanism to propel blood back toward the heart.[1] The veins of the foot are susceptible to several pathologies, including corona phelbectatica, varicose veins, and venous ulcers.[1] The great saphenous vein is also a common graft source for specialized conduit/bypass surgeries to managed various cardiac, thoracic, neurovascular, and urological pathologies.[2]

The venous drainage of the lower limb starts mainly on the dorsum of the foot, with proximal venous blood return occurring in both a superficial and deep venous pattern. The majority of the foot is drained by the small saphenous vein. The small saphenous vein begins at the lateral end of the dorsal venous arch. It then courses posterior to the lateral malleolus, ascending on the posterior side of the leg, running with the sural nerve before emptying into the popliteal vein. The great saphenous vein begins at the medial end of the dorsal venous arch of the foot. It then passes anterior to the medial malleolus and runs on the medial side of the lower limb before emptying into the femoral vein. The femoral vein then drains into the external iliac vein, which combines with the internal iliac vein to form the common iliac vein; this then drains into the inferior vena cava and right atrium of the heart.

The limb buds of the embryo begin to form about five weeks after fertilization as the lateral plate mesoderm migrates into the limb bud region and condenses along the central axis to eventually form the vasculature and skeletal components of the lower limb.[3][4][5] Several factors influence the formation of the limb bud vasculature and musculature, including retinoic acid, sonic hedgehog (SHH), HOX genes, apical ectodermal ridge (AER), and the zone of polarizing activity (ZPA).

Retinoic acid is a global organizing gradient that initiates the production of transcription factors that specify regional differentiation and limb polarization. The apical ectodermal ridge (AER) produces a fibroblast growth factor (Fgf), promoting the outgrowth of the limb buds by stimulating mitosis.[3][4][5] The specific fibroblast growth factor involved in hindlimb development is Fgf10, which is stimulated by Tbx4.[6] The zone of polarizing activity (ZPA) produces SHH, which promotes the organization of the limb bud along the anterior-posterior axis. SHH activates specific HOX genes – Hoxd-9, Hoxd-10, Hoxd-11, Hoxd-12, Hoxd-13 – which are important in limb polarization and regional specification.[3][4][5] These genes control patterning and, consequently, the morphology of the developing limb in the human embryo.[6] Errors in Hox gene expression can lead to malformations in the limbs.[6]

The distribution of lymphatic vessels of the lower limb is similar to the distribution of the veins of the lower limb and can divide into two major groups: superficial and deep. The superficial vessels are the great saphenous vein (medial) and lesser saphenous vein (lateral). The great saphenous vein drains into the inguinal lymph nodes, while the lesser saphenous vein drains into the popliteal nodes. The deep lymphatic vessels contain the anterior tibial, posterior tibial, and peroneal vessels, which follow each of their respective arteries and drain into the popliteal nodes.

Occlusive arterial disease is the leading cause of death worldwide.[9] One of the most commonly performed revascularization techniques to treat occlusive arterial disease is coronary artery bypass graft surgery. The great saphenous vein is a common source for a conduit for surgical revascularization.[9] The great saphenous vein can be harvested using an open or minimally invasive technique.[10] The vein then gets sewn to the aorta on one end and past the obstruction into the coronary artery on the other end.[10]

Another surgical consideration of the veins of the foot involves varicose vein surgery. Varicose vein surgery is one of the most common forms of surgery.[11] There are several ways to remove or close off varicose veins surgically, but the two most common ways to remove varicose veins are via vein stripping and phlebectomy.[11] Vein stripping involves completely removing the varicose vein by making two incisions proximal and distal to the varicose vein and pulling the vein out through the top incision.[11] A phlebectomy involves making small incisions of a few millimeters along the affected vein and using a small hook to pull the vein out through the incisions to cut and remove pieces of it.[11] There are several other ways to surgically treat varicose veins, including endovenous thermoablation, radiofrequency ablation, and foam sclerotherapy.[12]

The veins of the foot are susceptible to several pathologies, including corona phelbectatica, varicose veins, deep vein thrombosis, and venous ulcers.[1] Corona phelbectatica is the presence of abnormally visible cutaneous blood vessels at the ankle with four distinct components: “venous cups,” blue and red telangiectasias, and capillary “stasis spots.”[1][13] The veins present in corona phelbectatica are frequently referred to as “ankle spider veins” and are a clear sign of serious chronic venous insufficiency that requires medical attention because of their potential to result in more serious conditions, including blood clots and/or leg ulcers.[1][13]

Varicose veins are a common pathology seen in the veins of the foot and ankle. They are ectatic, tortuous vessels of the superficial venous system that are at least 3 mm in size that arises from the failure of venous valves to close properly to allow the backward flow of blood.[14]  The two main superficial leg veins – the great saphenous vein and the small saphenous vein – and their branches are the most common sites of varicose veins.[14] Patients with varicose veins may present with no symptoms other than the enlarged vein itself, but some may experience pain, burning, itching, and/or leg swelling. These varicose veins should be taken seriously because they present a cosmetic problem and increase the risk for the development of superficial vein thrombosis and venous thromboembolic disease.[14] The treatment of varicose veins includes conservative and surgical treatments. Conservative treatment of varicose veins includes elastic compression stockings to control swelling, weight loss, and topical steroid cream to control inflammation. Surgical treatment includes varicose vein stripping, phlebectomy, endovenous thermoablation, radiofrequency ablation, and foam sclerotherapy.[12]

Lastly, the veins in the foot can be involved in abscesses and ulcers due to diabetic complications as well as intravenous drug use. In each case, it is crucial to treat the underlying medical issue such as diabetes or addiction while also providing topical wound care therapies, antibiotics, and/or anti-platelet or anti-clotting medications to prevent a blood clot. 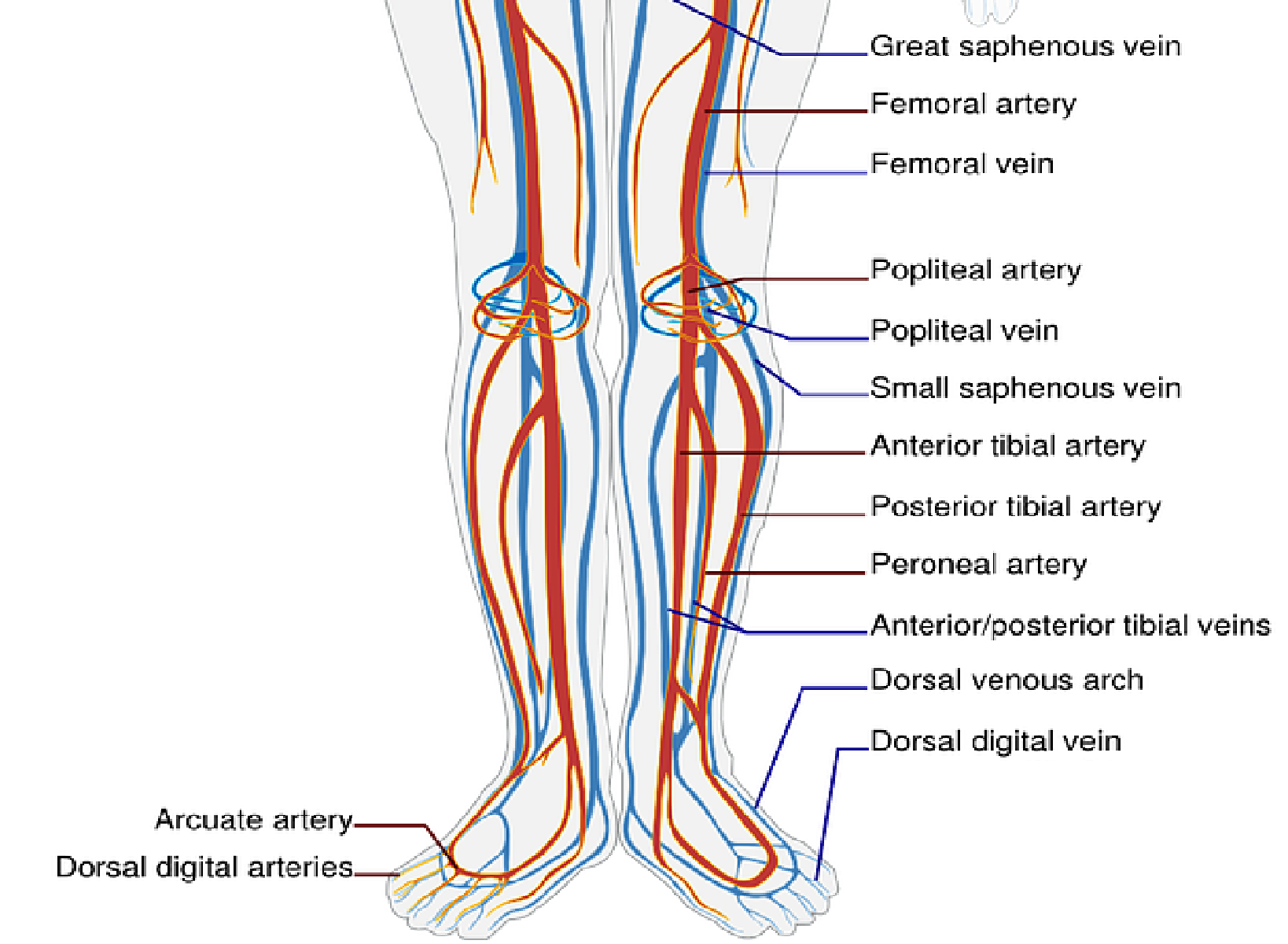