The orbit is a pear shape, with the optic nerve at the stem, and holds approximately 30 cc volume. The entrance to the globe anteriorly is approximately 35 mm high and 45 mm wide. The depth from orbital rim to the orbital apex measures 40 to 45 mm in adults. The maximum width is 1 cm behind the anterior orbital margin. Both race and gender can affect the measurements of the bony orbit. The orbital cavity contains the globe, nerves, vessels, lacrimal gland, extraocular muscles, tendons, and the trochlea as well as fat and other connective tissue. An increase in the volume of the extraocular structures within the orbit can cause proptosis, which is protrusion of the globe and/or displacement (deviation) of the globe from its normal position.

Walls of the Orbit

The orbital roof consists of two parts of two bones, the orbital plate frontal bone and the lesser wing of the sphenoid bone. The fossa of the lacrimal gland is in the orbital roof, and it lies anteriorly and laterally behind the zygomatic process of the frontal bone. The trochlear fossa is medial and about 4 mm from the orbital margin. This is where the pulley of the superior oblique is attached.

The lateral orbital wall is formed by two bones: the zygomatic bone and the greater wing of the sphenoid. This is the strongest of the walls of the orbit. There is a lateral orbital tubercle, which is an elevation of the orbital margin of the zygomatic bone and is an attachment for many important structures. These are the ligament of the lateral rectus muscle, the suspensory ligament of the eyeball (Lockwood ligament), lateral palpebral ligament, aponeurosis of the levator palpebrae superioris muscle, and the Whitnall ligament.

Several openings in the bones of the orbit have anatomic and clinical applications.

The optic nerve, the ophthalmic artery, and choroid plexus sympathetic fibers come from the middle cranial fossa and travel into the orbit via the optic foramen. The optic foramen passes through the lesser wing of the sphenoid bone and travels inferiorly, anteriorly, and laterally as it enters the orbit.

The nasolacrimal duct drains tears from the eye into the inferior meatus of the nose.

The infraorbital vessels then travel along the floor of the orbit and pass through infraorbital groove anteriorly.[1][2][3]

The bones of the orbit hold the globe and periocular structures, serve as origin points for the extraocular muscles and provide the structure for the fascial and connective tissue elements of the orbit.

The ophthalmic artery branches from the internal carotid artery and passes through the optic canal, which is inferior to the optic nerve. There is an elevation on the orbital margin of the zygomatic bone. The optic canal is formed by the sphenoid bone in the middle cranial fossa.

The optic nerve (CN II) is the nerve responsible for relaying sight information to the brain. The optic nerve travels from the retina, which is the inside of the globe, through the optic foramen.

The ophthalmic nerve is the first division of the trigeminal nerve (CN V) and responsible for conveying sensory information from the globe, upper eyelid, lacrimal gland, conjunctiva, nasal mucosa, frontal sinus, external nose, and scalp. The ophthalmic nerve passes through the superior orbital fissure. Near this point, it divides into more specialized nerves.

Seven extraocular muscles are associated with the bones of the orbit. All but the inferior oblique muscle originate at the orbital apex. The inferior oblique, as noted above, originates at the floor of the orbit in a depression on the orbital floor near the orbital rim. All of the rectus muscles originate at the annulus of Zinn. The superior oblique originates just medial to the optic foramen, between the annulus of Zinn and periorbita. This is the muscle that travels through the trochlea, forming a pulley that allows for intorsion of the globe. All of the extraocular muscles insert on the globe except the levator palpebrae superioris, which broadens anteriorly to become the levator aponeurosis, and is responsible primarily for eyelid elevation.[3]

The anterior orbit is accessed either using a transcutaneous approach or a transconjunctival approach. Lid creases can be the point of entry for most cutaneous approaches. In these cases, the cornea is usually protected with an eye shield and eye lubricant.[7][8]

The bones of the orbit protect the globe of the eye as well as other periocular contents. A fracture to the orbit can involve the contents of the orbit and potentially compress nerves or muscles within the orbit.

The abducens nerve is commonly affected when the intracranial pressure increases because its course bends sharply on the petrous part of the temporal bone.[9] 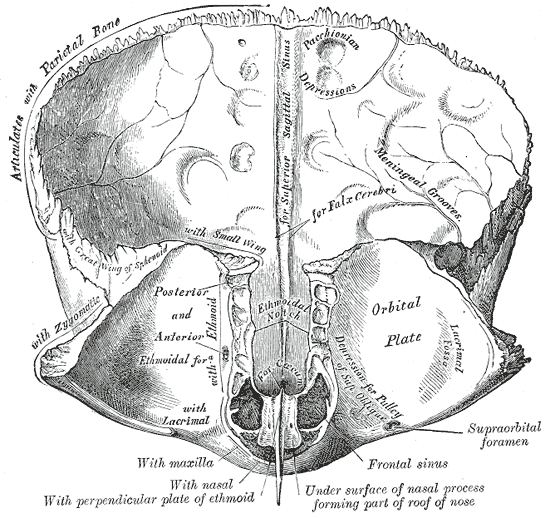 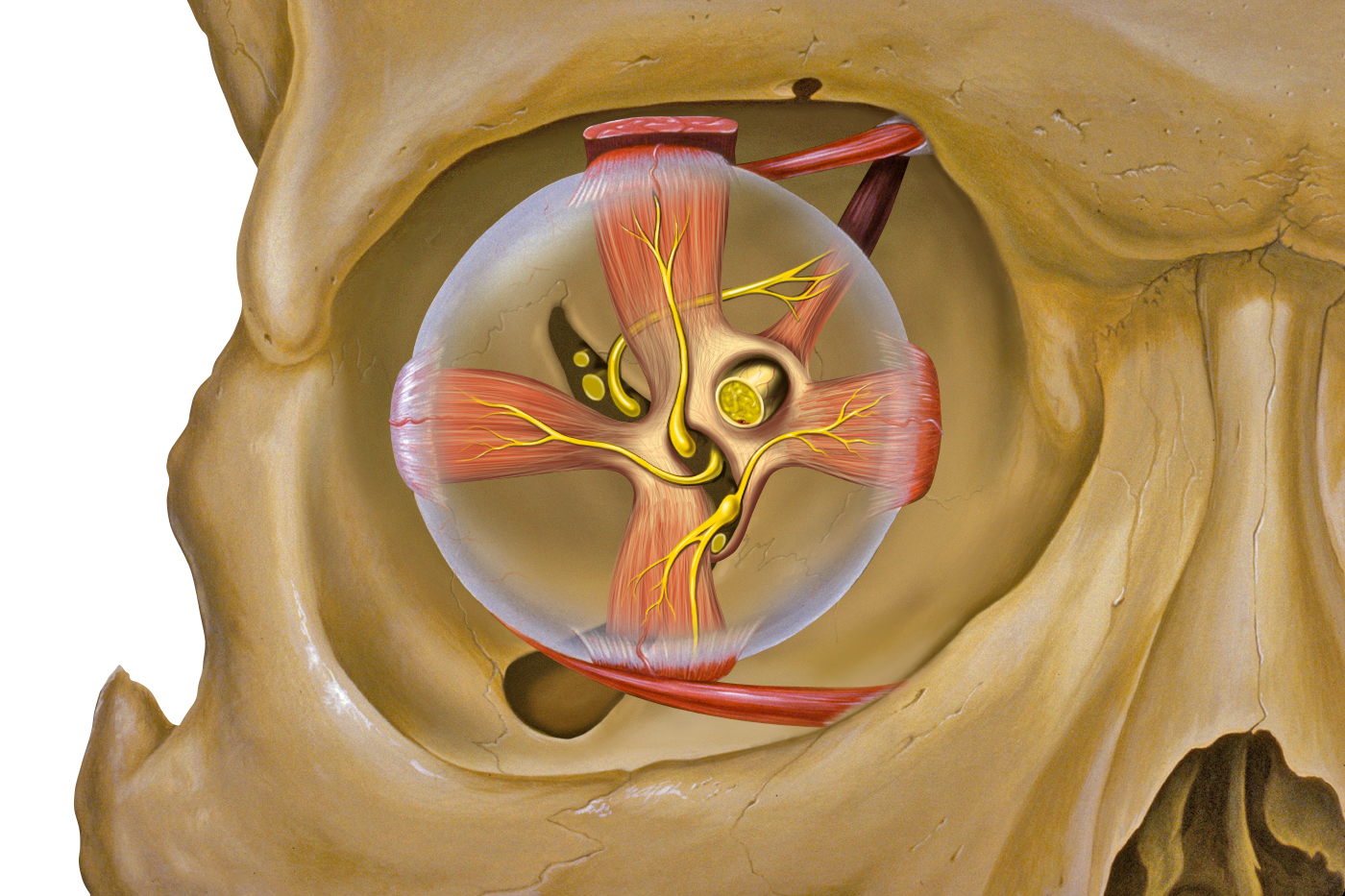