Bone markings are invaluable to the identification of individual bones and bony pieces and aid in the understanding of functional and evolutionary anatomy. They are used by clinicians and surgeons, especially orthopedists, radiologists, forensic scientists, detectives, osteologists, and anatomists. Although the untrained eye may overlook bone markings as contours of the bone, they are not as simple. Bone markings play an important role in human and animal anatomy and physiology. The functionality of bone markings ranges from enabling joints to slide past each other or lock bones in place, providing structural support to muscle and connective tissue, and providing circumferential stabilization and protection to nerves, vessels, and connective tissue. Understanding the importance of bone markings provides a new appreciation and understanding of bony anatomy and its functional relationships with soft tissues.[1][2][3][4][5]

Body - This usually refers to the largest, most prominent segment of bone. Examples include the diaphysis or shaft of long bones like the femur and humerus.

Condyle - Refers to a large prominence, which often provides structural support to the overlying hyaline cartilage. It bears the brunt of the force exerted from the joint. Examples include the knee joint (hinge joint), formed by the femoral lateral and medial condyles, and the tibial lateral and medial condyles. Additionally, the occiput has an occipital condyle which articulates with atlas(C1) and accounts for approximately 25 degrees of cervical flexion and extension.

Crest - A raised or prominent part of the edge of a bone. Crests are often the sites where connective tissue attaches muscle to bone. The iliac crest is found on the ilium.

Diaphysis - Refers to the main part of the shaft of a long bone. Long bones, including the femur, humerus, and tibia, all have a shaft.

Epiphysis - The articulating segment of a bone, usually at the bone's proximal and distal poles. It usually has a larger diameter than the shaft (diaphysis). The epiphysis is critical for bone growth because it sits adjacent to the physeal line, also known as the growth plate.

Facet - A smooth, flat surface that forms a joint with another flat bone or another facet, together creating a gliding joint. Examples can be seen in the facet joints of the vertebrae, which allow for flexion and extension of the spine.

Fissure - An open slit in a bone that usually houses nerves and blood vessels. Examples include superior and inferior orbital fissure.

Fossa - A shallow depression in the bone surface. Here it may receive another articulating bone or act to support brain structures. Examples include trochlear fossa, posterior, middle, and anterior cranial fossa.

Groove - A furrow in the bone surface that runs along the length of a vessel or nerve, providing space to avoid compression by adjacent muscle or external forces. Examples include a radial groove and the groove for the transverse sinus.

Head - A rounded, prominent extension of bone that forms part of a joint. It is separated from the shaft of the bone by the neck. The head is usually covered in hyaline cartilage inside a synovial capsule. It is the main articulating surface with the adjacent bone, forming a "ball-and-socket" joint.

Meatus - A tube-like channel that extends within the bone, which may provide passage and protection to nerves, vessels, and even sound. Examples include external acoustic meatus and internal auditory meatus.

Neck - The segment between the head and the shaft of a bone. It is often demarcated from the head by the presence of the physeal line in pediatric patients and the physeal scar (physeal line remnant) in adults. It is often separated into the surgical neck and anatomical neck. The anatomical neck, which may represent the old epiphyseal plate, is often demarcated by its attachment to capsular ligaments. The surgical neck is often more distal and is demarcated by the site on the neck that is most commonly fractured. For example, in the humerus, the anatomical neck runs obliquely from the greater tuberosity to just inferior to the humeral head. The surgical neck runs horizontally and a few centimeters distal to the humeral tuberosities.

Notch - A depression in a bone which often, but not always, provides stabilization to an adjacent articulating bone. The articulating bone will slide into and out of the notch, guiding the range of motion of the joint. Examples include the trochlear notch on the ulna, radial notch of the ulna, suprasternal notch, and the mandibular notch.

Ramus - The curved part of a bone that gives structural support to the rest of the bone. Examples include the superior/inferior pubic ramus and ramus of the mandible.

Sinus - A cavity within any organ or tissue. Examples include paranasal sinuses and dural venous sinuses.

Spinous Process - A raised, sharp elevation of bone where muscles and connective tissue attach. It is different than a normal process in that a spinous process is more pronounced.

Trochanter - A large prominence on the side of the bone. Some of the largest muscle groups and most dense connective tissues attach to the trochanter. The most notable examples are the greater and lesser trochanters of the femur.

Tuberosity - A moderate prominence where muscles and connective tissues attach. Its function is similar to that of a trochanter. Examples include the tibial tuberosity, deltoid tuberosity, and ischial tuberosity.

Tubercle - A small, rounded prominence where connective tissues attach. Examples include the greater and lesser tubercle of the humerus.

Although rigid and seemingly stagnant, the bone is an active organ that is constantly remodeling via the action of osteoclasts and osteoblasts, which degrade and build bone, respectively. As such, the contours of the bone will reflect the forces on it, whether they be from adjacent hard or soft tissue. This is described as Wolff's Law, which states that healthy bone will remodel itself with adaptive changes to forces. The bone will remodel its contours to reflect the frequency, distribution, and magnitude of forces.

Articulating features of bones, like facets, condyles, and heads, develop as a result of articulating surfaces between two bones.

Protuberances like crests, trochanters, tuberosities, and tubercles result from traction forces of connective tissue and muscles. The various sizes and shapes of these markings are indicative of the forces that are applied to the bone by these tissues. The wide range of bone markings begins to form early in embryologic development and continues for about 20 years.

Bone markings are significant to physicians and surgeons because they serve as anatomic landmarks that give information about the structures surrounding them. For example, an anesthesiologist will inject just medial and posterior to the ischial spine to achieve a pudendal nerve block. Alternatively, bone markings like the adductor tubercle on the femur can give valuable information about the muscles the surgeon is viewing.[6][7]

Nearly all medical providers will use bony landmarks throughout their careers to approximate injection sites, localize the desired soft tissue, or target medical imaging. There are many such examples; however, the following are notable: 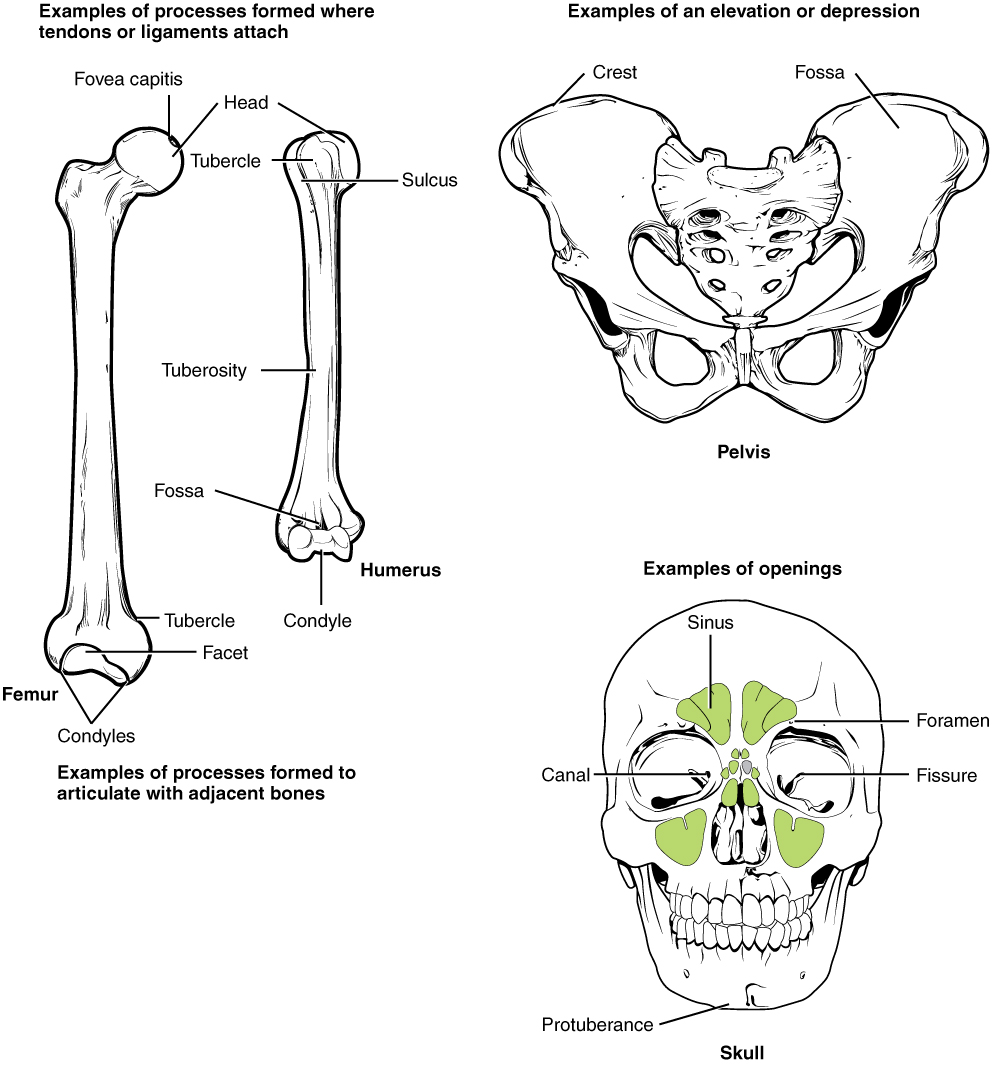