Blood supply to the spinal cord is highly complex and anastomotic to ensure adequate supply to the entire structure. Variability in the vasculature is not uncommon. Additionally, blood flows preferentially to certain regions of the spinal cord, particularly the cervical and lumbar enlargements.[1]

Longitudinally, the spinal cord receives vascular supply by the anterior spinal artery (ASA) and a pair of posterior spinal arteries (PSA). These three arteries typically originate from the distal vertebral arteries at the superior aspect of the spinal cord. However, some literature has described the PSAs as branches of the posterior inferior cerebellar artery. The ASA is the predominant supply of the spinal cord. It supplies the anterior two-thirds of the cross-sectional area through its terminal branches, the central arteries. The paired PSAs provide blood to the spinal posterior one-third cross-sectional area. The three vessels also connect circumferentially around the structure via the pial plexus, often referred to as the vasocorona. It supplies the periphery of the cord via small perforators, known as rami perforantes.[2][3]

Segmentally, numerous anterior and posterior radicular arteries (see below) provide collateral blood flow to the entire vertebral column, including the vertebral bodies and intervertebral discs, in addition to the spinal cord.[1][3]

Arterial supply to the cervical spinal cord displays a marked variation between individuals because of differences in embryonic development—the ASA and two PSAs branch off the distal vertebral arteries at the level of the foramen magnum. The ASA courses midline on the ventral sulcus of the spinal cord, while the PSAs travel parallel to each other in a paramedian location on the dorsal aspect. In the cervical spine, two or three supportive anterior and posterior radiculomedullary arteries branch from the vertebral arteries. The largest of these radiculomedullary vessels is the artery of cervical enlargement, usually identified between the C4-C8 vertebral levels, most often coursing along the C6 nerve root. The radiculomedullary arteries join with the ASA and PSAs to carry supplemental blood flow to these nervous tissues. The provision of supplemental flow to the cord is from branches of the vertebral, ascending cervical, and deep cervical arteries, and potentially the ascending pharyngeal and occipital arteries.[1][3]

The ASA and the two PSAs course caudally past the conus medullaris. At this level, the ASA is at its thickest. After coursing inferiorly past the conus, with the filum terminale, the ASA ends as a collection of rami cruciantes that anastomose with each distal PSA.[3]

The vasculature of the spinal cord is highly variable in size and structure. This is attributable to differences in embryological development and proliferation as well as metabolic needs. Some variants are described in the text above, such as the development of the artery of Adamkiewicz, the branching origin of the PSAs, and the number of segmental radicular arteries supplying the thoracic spinal cord. However, these are not the only identified instances of variation in spinal cord vasculature.

Many vascular complications can arise during surgical procedures of the spine. Besides the complex vasculature providing blood flow to the nervous structures in the spinal cord, the vertebral column is near vital vascular structures, including the aorta, iliac vessels, and carotid and vertebral arteries. Anterior cervical exposures come close to the carotid sheath, and injuries to the carotid artery—especially during revision surgery—have been documented.[7] Posterior cervical procedures, mainly those involving lateral mass screw placement, risk injuring the vertebral arteries that course in the transverse foramina, entering the C6 and exiting the C2 vertebrae.[8]

Acute central cord syndrome is the most common type of spinal cord injury, accounting for over two-thirds of all incomplete cervical spinal cord injuries. Its predominant etiology is from cervical spine hyperextension trauma that compresses the spinal cord. Trauma to the cord often results in centro-medullary hemorrhage and edema. Characteristic symptoms are upper extremity weakness, sensory deficits, and bowel, and bladder dysfunction. Magnetic resonance imaging (MRI) is vital for diagnosing central cord syndrome and other complications such as hemorrhage and spinal column instability. Treatment specifics vary based on severity, but ensuring spinal column stability is always paramount. Surgical approaches are necessary in severe cases with marked instability and neurological impairment.[12]

Spinal cord infarction (SCI) results from an interruption in spinal cord blood supply and can lead to acute spinal syndrome. Though the development of SCI is rare (comprises only 1% of stroke), infarct of the anterior spinal artery and/or the artery of Adamkiewicz is overwhelmingly more common than infarct of a posterior spinal artery. Lesions of the anterior supply lead to clinical presentation characterized as an anterior spinal syndrome. Symptoms will depend on the location and severity of the infarct but include sudden back pain progressing to sensation deficits, extremity weakness or paresis, and bladder or bowel dysfunction. Onset is typically sudden, with peak symptoms arising within 30 to 45 minutes. In the typical ASA infarct, the anterior two-thirds of the cord are affected, leading to bilateral weakness, progressive sensory loss, and potential autonomic symptoms. An infarct of a PSA will typically cause unilateral symptoms. Diagnosis is made via detection on MRI, often after visualization of the trademark “owl’s eye” hyperintensity appearance on T2 axial images. Underlying etiology is wide-ranging; thus, a range of treatment methods exist.[13][14]

Similarly, subarachnoid hemorrhage (SAH) of spinal origin is uncommon but has received coverage in the literature. Spinal SAH is attributable to either arteriovenous fistula or malformation, as well as a spinal aneurysm. Symptoms usually include sudden onset neck or back pain and extremity weakness with signs indicating spinal cord compression. Again, computed tomogram (CT)/computed tomogram angiogram (CTA) and MRI are important for urgent diagnosis. Treatment varies depending on severity, location, and size, but both conservative treatment and endovascular or surgical management have proven effective.[15][16] 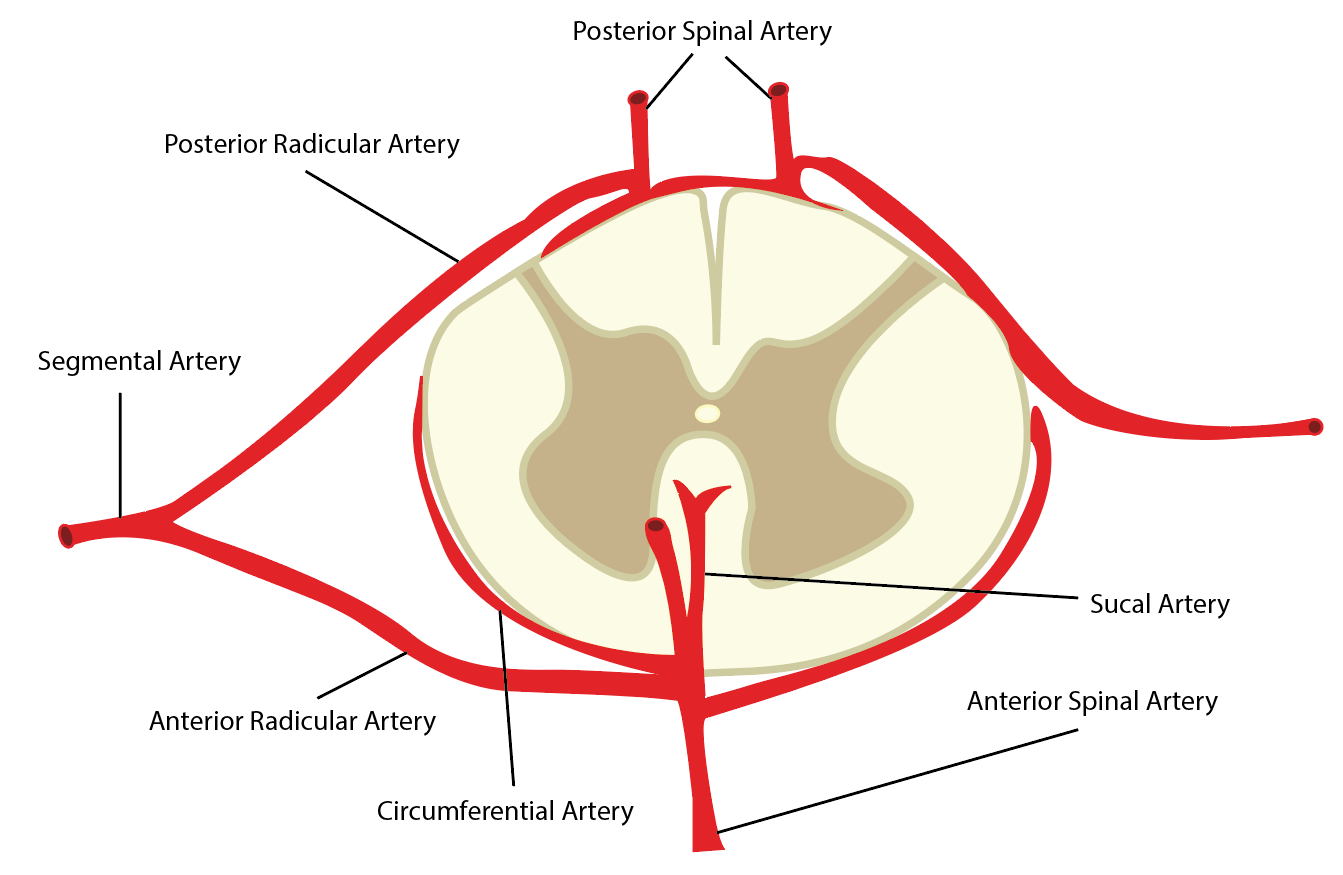 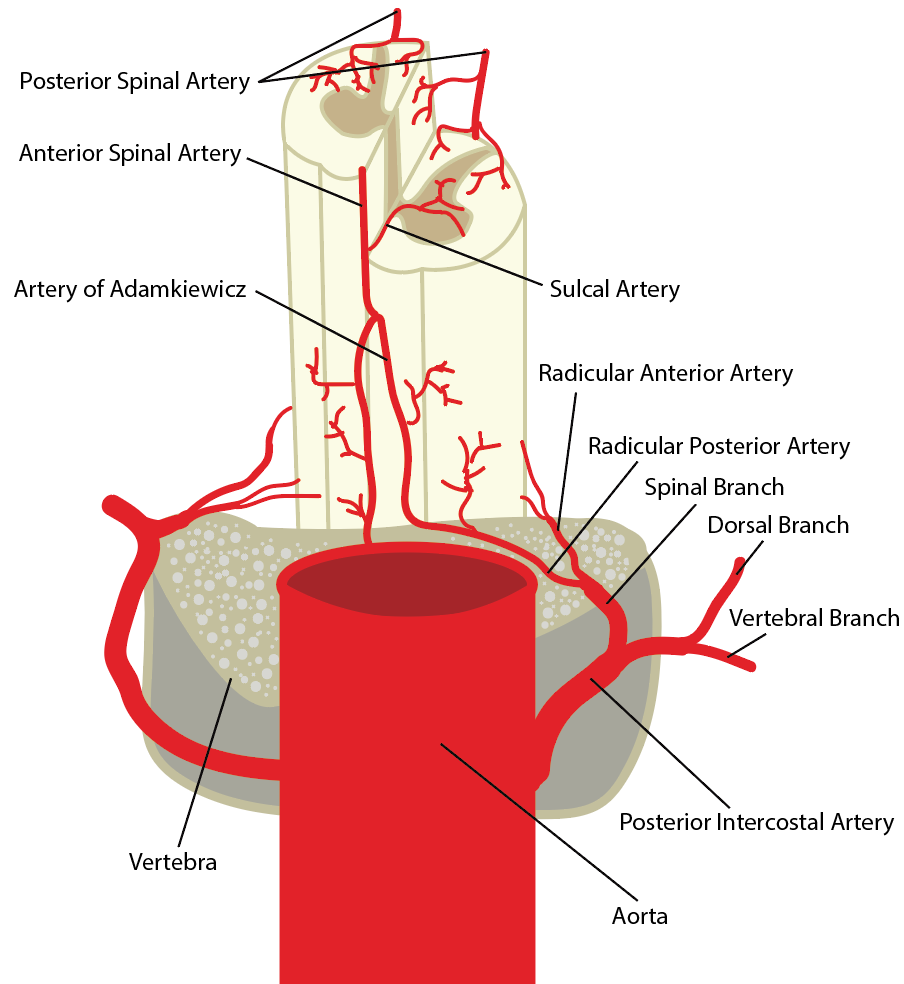