The anterolateral abdominal wall includes the front and side walls of the abdomen.

The venous drainage of the superficial anterolateral abdominal wall involves an elaborate subcutaneous venous plexus. This plexus drains superiorly and medially to the internal thoracic vein. It drains superiorly and laterally to the lateral thoracic vein. Further, the plexus drains inferiorly to the superficial epigastric vein and the inferior epigastric vein which are tributaries of the femoral vein and external iliac vein, respectively.

A layer of connective tissue lining the abdominal cavity namely the extraperitoneal fascia lies deep to the transversalis fascia and contains varying amounts of fat. The vasculature extending into mesenteries is located in this extraperitoneal fascia which is abundant on the posterior abdominal wall, especially around the kidneys, and continues over organs covered by peritoneal reflections.

The veins of the anterolateral wall carry deoxygenated blood into the systemic venous circulation and back to the lungs for oxygenation. The superficial abdominal veins dilate and provide a collateral circulation when the portal vein, superior vena cava, or the inferior vena cava get obstructed. The obstruction causes dilated, distended, and tortuous veins often resembling the venomous serpents on the head of the Greek god “Medusa” giving rise to the term “Caput Medusae.”[1][2][3]

The anterior abdominal wall is drained by:

The superior epigastric vein and musculophrenic vein are the two terminal tributaries of the internal thoracic vein inferior epigastric vein. The anterior intercostal veins carry deoxygenated blood from the diaphragm, the anterior abdominal wall and the seventh, eighth, and ninth intercostal spaces and continue upward and laterally along the deep surface of the diaphragm as far as the tenth intercostal space of the abdominal wall

The inferior epigastric vein drains into the external iliac vein near its lower end just above the inguinal ligament. It runs upward and medially in the extraperitoneal connective tissue, passes just medial to the deep inguinal ring, pierces the fascia transversalis at the lateral border of the rectus abdominis and enters the rectus sheath by passing in front of the arcuate line. Within the sheath, it drains the rectus muscle and ends by joining with the superior epigastric vein.

The venous drainage from the lateral abdominal wall drains above mainly into the axillary vein via the lateral thoracic vein and below into the femoral vein via the superficial epigastric and the superficial circumflex iliac vein. The level of the umbilicus is a watershed. Venous blood and lymphatic fluid drain upward above the plane of the umbilicus and downward below this plane.

Veins of the anterolateral wall can get dilated due to multiple causes. Obstruction of the superior vena cava or inferior vena cava (by a mass or thrombus) can present as dilated, tortuous veins over the abdomen. Urgent surgery may be required in such situations. Supra-umbilical median incisions through the linea alba have several advantages such as being bloodless as most vasculature courses lateral to the linea alba. Furthermore, these incisions are safe to muscles and nerves but tend to leave a postoperative weakness through which a ventral hernia may form.[7]

The blockage of the hepatic portal vein or vascular channels in the liver can interfere with the pattern of venous return from abdominal parts of the gastrointestinal system. Vessels that interconnect the portal and caval systems can become greatly distended and tortuous, allowing blood in tributaries of the portal system to bypass the liver, enter the systemic caval system, and thereby return to the heart. 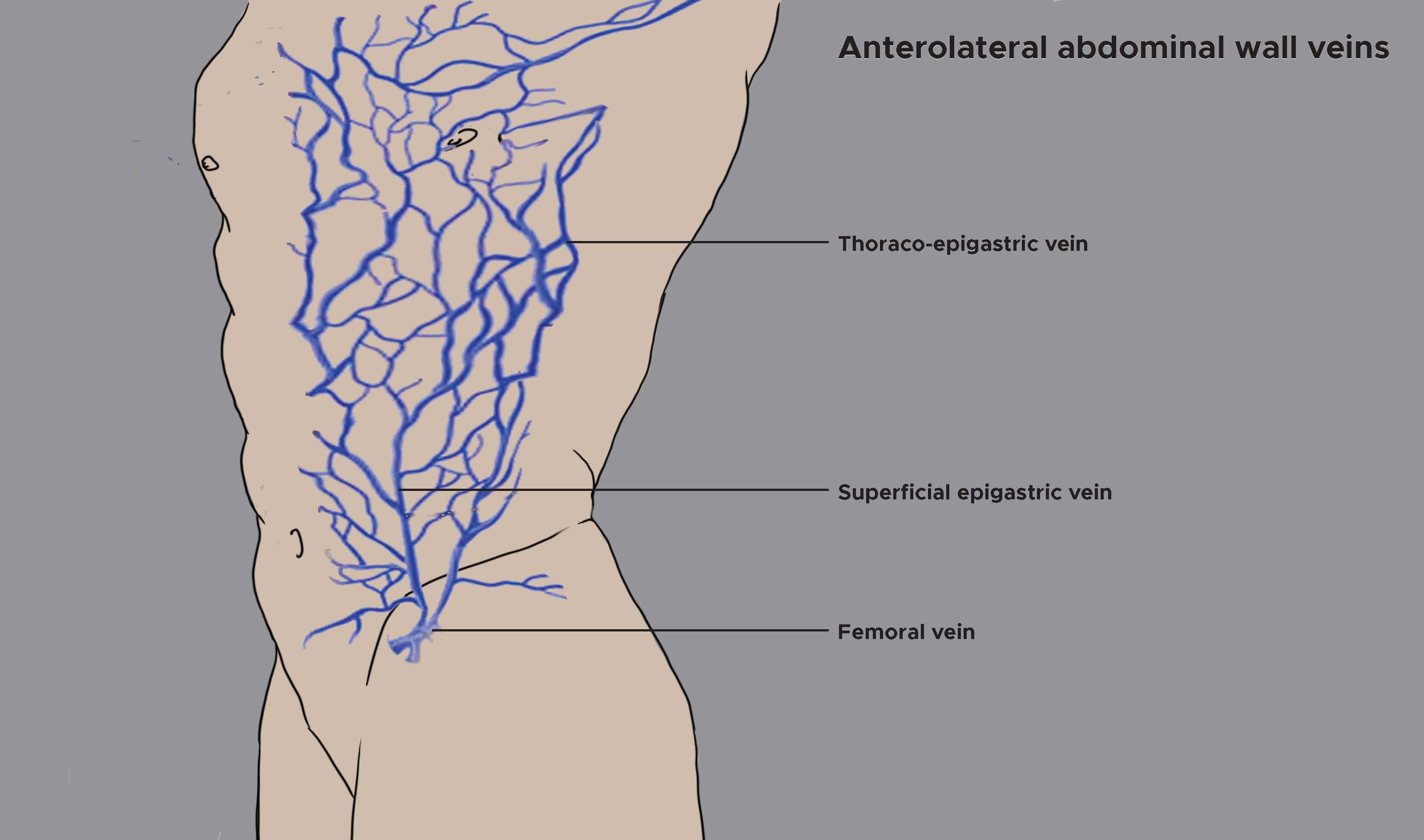 Barber B,Horton A,Patel U, Anatomy of the Origin of the Gonadal Veins on CT. Journal of vascular and interventional radiology : JVIR. 2012 Feb     [PubMed PMID: 22192634]