NIMS provides specific terminology to describe the organizational structure of incident command. The medical components of a disaster are not assigned their own “command” or “commander,” but are part of the operations section. The term for a functional unit under the operations section is a “branch,” and thus the medical components are the “medical branch;” the role in charge of a branch is a “director.” Regionally, however, terminology may vary, based on the local implementation of NIMS guidelines. Nonetheless, this article will utilize NIMS prescribed terminology.

A common misconception of the incident command framework is that each "role" must be filled by a unique person. This is not the case. The officer and director roles can be assigned to unique individuals, but this is not required, and a single person may have more than one role, so long as the span of control described in the incident command structure is not exceeded. Major incidents are likely to require assigning each role to a separate individual; smaller incidents may be managed with fewer people. For example, a small incident with 15 patients and mostly minor injuries may still utilize the NIMS framework. A single person may perform the role of incident commander, operations section leader, and medical branch director. Another person may serve as the triage officer, treatment officer, and transport officer, managing the immediate triage and medical needs, and directing units to take patients to hospitals. Because an incident of this duration is likely to be a short-lived incident, not lasting more than a few hours, no logistics, planning, or finance roles are needed. Two individuals may have managed the entire incident. Larger incidents will require more personnel to manage the needed roles.

The organizational reporting structure is detailed in the included image. The section discussed in this article is primarily the medical branch; the staging officer and medical supply officer are also included on this organizational chart.

The morgue officer is responsible for the management of a collection area for deceased victims. Ideally, the area will have a cool floor surface and be secure. One responsibility of the morgue officer is confirmation of death; the pronouncement of death must be done by a coroner, JP, or other medical authority. Additionally, the morgue officer must maintain accurate records, including time, date, and location where the victim was found, name, and manner of identification, if known. Each victim should be labeled with this information as well. Personal belongings found on the victim should remain with the victim. Victims should only be moved in coordination with incident command and whatever medical authority is present.

The unpredictable nature of disasters and mass casualty incidents makes planning and conducting prospective research in an actual setting very difficult. Case studies have described retrospective analyses of actual incidents as well as evaluations of MCI Drills, which have value for quality improvement and planning but do not provide the "gold standard" of a randomized, controlled trial. Many criticisms of ICS exist, including those of the medical incident command. One of the often-cited problems or struggles with the medical incident command system is that ICS does not address tactics, strategies, or decision-making. Additionally, the lack of funding to support training decreases the ability to practice making decisions. MCI training, especially joint training among all responders (EMS, fire, police, and hospital personnel), allows for the identification of mistakes and an opportunity to improve MCI plans.[3]

Another difficulty with ICS is that implementation of the ICS system, terminology, and expectations may not be uniform. Fire departments and EMS systems may locally adopt versions of the ICS system that do not specifically follow the terminology or command structure prescribed by NIMS but fit their local reporting structure and needs.[4] While this is effective for most locally managed incidents, the use of local terminology or reporting structure may become more difficult if a larger-scale incident occurs requiring resources not familiar with local terminology or structure.[5]

Prehospital personnel is the first medical contact for victims involved in MCI. Effectively applying resources and an organized, systemic method of delivering people appropriately to receiving facilities is, in theory, the key to improved outcomes. Effectively applying out-of-hospital treatments, such as basic airway management and bleeding control has the potential to save lives, and the NIMS structure aids in the organization and application of resources.

Interprofessional communication and coordination is imperative to the success of the medical incident command structure and is truly at the heart of the incident command. Joint training among public safety agencies, disaster response teams, and hospitals is key to identifying mistakes and shortcomings of response plans (PMID).[3] Organizations that take part in joint training are more likely to be familiar with the equipment and team members, thus improving interoperability.

Some large-scale medical incidents require deploying medical care teams for mobile hospitals including physicians and nurses that are required to work with prehospital personnel in an out-of-hospital environment. Fostering understanding of roles of nurses, physicians, and EMS personnel is imperative to successful interprofessional communication in a disaster setting.

Research on mass casualty incidents and disaster is limited to simulated incidents and retrospective reviews of disaster response. One retrospective incident review revealed that many decisions made during the initial evaluation of an incident are made with uncertainty and pressure, and those making decisions are more prone to choose a “workable option” rather than consider all options thoroughly (PMID).[6] Another retrospective evaluation of a training exercise suggested that training should occur with all disciplines represented and should focus on individual communication, triage, and understanding of incident management. 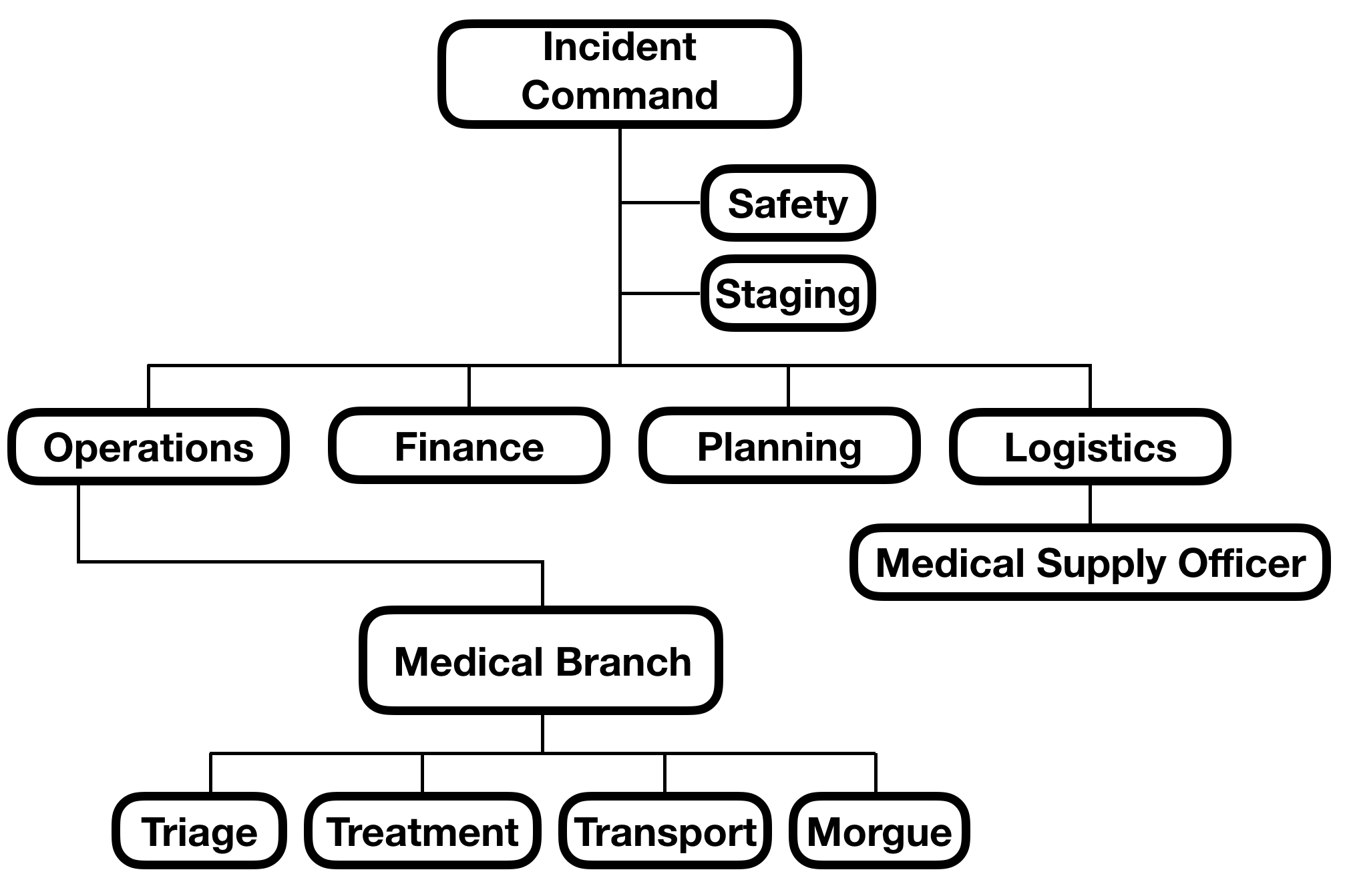