A widened mediastinum is a feature often seen on a plain chest x-ray. When the mediastinum is greater than 6 to 8cm, depending on which source, it is noted to be wide. A wide mediastinum has many causes which include the following:

A widened mediastinum will often be first noted in the emergency department on a chest x-ray. The mediastinal borders are composed of the right heart, ascending aorta, superior vena cava, aortic knob, descending aorta, and the left heart. These structures are all contained between the right and left lungs. The mediastinum can be partitioned into three compartments from anterior to posterior, which is best viewed on the lateral film. The anterior compartment contains the heart, thyroid, and thymus. The middle mediastinal compartment includes the esophagus, trachea, and many lymph nodes. The posterior compartment is the paravertebral area and is primarily composed of the vertebral column.[1] The definition of a widened mediastinum is a measured mediastinal width greater than 6 to 8 cm, depending on which source you use.[2] This finding is very sensitive for major vascular injury in the setting of trauma but can have numerous additional associated pathologies, as noted above. Pathology causing a widened mediastinum may also compress or displace nearby structures, such as the trachea.

The first consideration when a widened mediastinum is noted on x-ray is the quality of the chest film as poor technique can cause this presentation. The proper distance for taking a standard PA chest x-ray is with 6 feet between the x-ray source and the detector plate. If the distance between the detector plate and the x-ray source is closer than 6 feet, the structures in the film will appear larger and less sharp. Additionally, an AP chest x-ray, typically obtained as a portable chest x-ray, is taken at a closer distance and therefore also reveals larger and less sharp structures.  Patient positioning also plays an important role. If the patient is rotated or slouched, the mediastinum may appear falsely widened. After you have ensured the processing of an adequate film, the second consideration is to compare the chest x-ray to prior studies, if available. Typically, more chronic causes of a widened mediastinum, such as a mass or lymphadenopathy, cause focal widening, whereas acute causes of a widened mediastinum, like infection or bleeding, cause diffuse, generalized widening.[3] After ensuring that both the execution of the radiograph was with proper technique and the widened mediastinum is a new finding, it is time to pursue this finding further.

The most significant life-threatening concern associated with a wide mediastinum is an acute aortic rupture or aortic dissection. Additional imaging must be obtained to investigate these diagnoses.[4] In a stable patient, CT angiography of the chest is the best study for aortic pathology. However, if there is concern that the patient is unstable, they should not be transported to the radiology suite. In this instance, bedside ultrasound is an option which may reveal aortic pathology.

In all cases, both immediate and potential causes of a widened mediastinum must merit consideration and be ruled out. 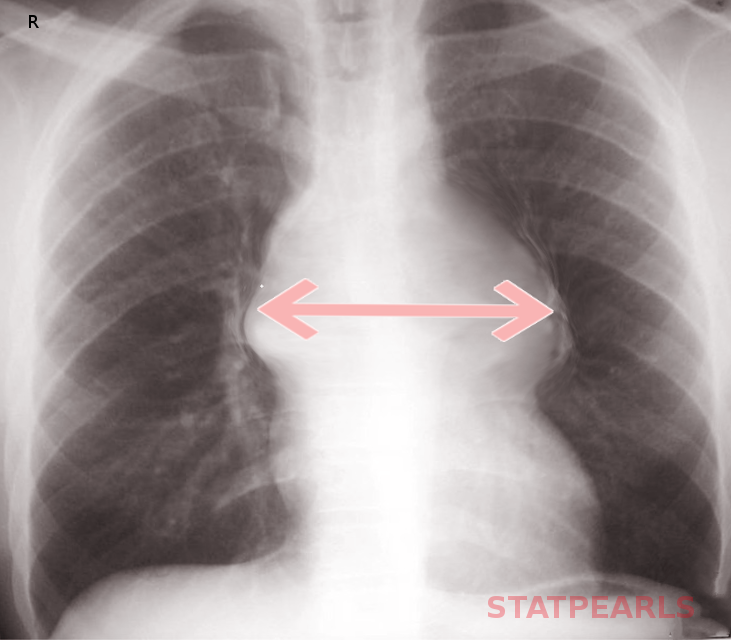