Chest inspection, palpation, and auscultation are key components of the physical examination of patients with respiratory disease. Palpation ascertains the signs suggested by inspecting and assessing the state of the pleura and lung parenchyma by studying the vocal fremitus. Vocal (tactile) fremitus is palpation of the chest wall to detect changes in the intensity of vibrations created with certain spoken words in a constant tone and voice indicating underlying lung pathology.[1][2][3]

Vocal fremitus is decreased in bronchial asthma, emphysema, or bronchial obstruction due to air trapping and decreased density of lung parenchyma. In case of pleural effusion and pneumothorax, air/fluid accumulates in the potential space between the chest wall and lung parenchyma, decreasing the transmission of lower frequency sound vibrations. Vocal fremitus also may be decreased in individuals with obesity.

On the other hand, inflammation and consolidation create a dense medium which increases the transmission of lower frequency sounds and vocal fremitus.

Bronchophony: A louder sound heard over an area of consolidation.

Whispering pectoriloquy: While the examiner auscultates over the lung fields, the patient is asked to whisper "one, two, three." Whispered words are heard clearly in the presence of consolidation. Whispered pectoriloquy has the same significance as increased fremitus and adds no new information to those approaches.

Egophony or an "E to A" change: A qualitative change in the voice that resembles the bleating of a goat. Select sound frequencies are able to pass through consolidation and tend to distort the sound of the vowel "E" so that it is perceived by the examiner as "A" or "AAAH."

The reliability of findings obtained using these maneuvers are controversial, and they are not frequently used by physicians in daily practice. However, undergraduate and postgraduate students are frequently required to perform these maneuvers during clinical assessments. A study among 100 general practitioners in the Mackay region of Queensland in Australia was conducted to assess how frequently they performed vocal fremitus (VF) and vocal resonance (VR) and their opinions of the value of this procedure. Majority (65.7%) rarely performed VF/VR as a routine during chest examination and more than half (53.7%) did not hold that routine VF/VR examination is desirable.[7][8][9]

On the other hand, it has been suggested that artifacts produced by vibrations of the thorax on color doppler sonographic examinations of breast tissue can be useful in differentiating benign and malignant mammary tumors. These artifacts are in the form of small color pixels which can be brought about by vocal fremitus. In benign tumors, color pixels are found only in surrounding tissue, whereas in malignant tumors, artifacts can be found within the tumor and the surrounding tissue. Power Doppler Vocal Fremitus can be used as an adjunct tool to B mode ultrasonogram for identification of breast lesions.

Before palpating the posterior chest for tactile fremitus, the patient is asked to fold his or her arms across the chest wall to displace both scapulae. The patient is asked to repeat “ninety-nine” or “one, two, three” in a constant tone while the practitioner simultaneously palpates the chest wall on both sides, using the ulnar border of the hand or the palmar base. Palpation begins with the lung apex and moves to the same location on the opposite side of the chest wall. The perceived vibrations on both sides are compared while moving hands from the apex to the base of the lung, covering the entire posterior chest wall. The same maneuver is repeated on the anterior and lateral chest walls.

Integration of history and physical findings of the respiratory system are important for formulating a differential diagnosis and planning further management. As discussed earlier, an increase in vocal fremitus indicates denser lung tissue, which can be caused by consolidation in diseases such as pneumonia. A decrease in vocal fremitus suggests air or fluid in the pleural spaces or a decrease in lung tissue density, which can be caused by diseases such as chronic obstructive pulmonary disease or asthma.

Inspection: Diminished chest movements on the affected side.

Palpation: Diminished chest movements on palpation. Decreased vocal fremitus on the affected side.

Percussion: Tympanic note on percussion of the affected side.

Auscultation: Diminished breath sounds and vocal resonance on the affected side.

Inspection: Fullness of intercostal spaces and diminished chest movements on the affected side. The apical impulse may not be visualized.

Percussion: Stony dullness on percussion of the affected side.

Auscultation: Diminished breath sounds and vocal resonance on the affected side. Egophony may be present on the upper border of the effusion.

Inspection: Diminished chest movements on the affected side.

Percussion: Dullness on percussion of the affected side.

Auscultation: Bronchial breathing sounds may be present. Increased vocal resonance on the affected side may be associated with bronchophony and whispering pectoriloquy.

Vocal fremitus is a vibration transmitted through the body. It refers to the assessment of the lungs by either the vibration intensity felt on the chest wall (tactile fremitus) and/or heard by a stethoscope on the chest wall with certain spoken words (vocal resonance). The vocal cords produce vibrations in the tracheobronchial tree that are felt throughout the lungs and chest wall. This is usually assessed by asking a patient to repeat a word such as "ninety-nine," while the healthcare provider feels the chest wall.

Evaluating for vocal fremitus, in the hands of an experienced examiner, can quickly rule in or out clinical issues of concern. 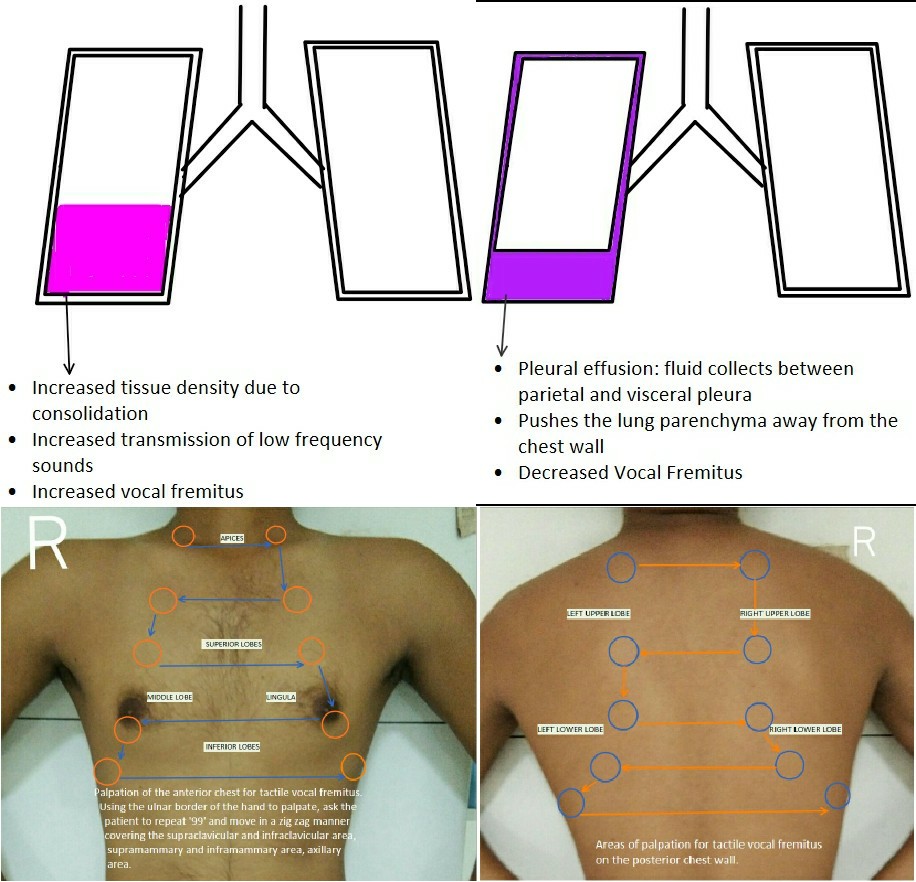 Realdi G, At the origin of medical semeiotics: the stethoscopy and the tactile vocal fremitus-still valuable tools at the bedside examination? Internal and emergency medicine. 2017 Sep;     [PubMed PMID: 28488161]