Visual stimuli from our surroundings are processed by an intricate system of interconnecting neurons, which begins with the optic nerve in the eye up to the visual processing center in our forebrain called the visual cortex. All the information travels in the form of nerve impulses that are triggered by photosensitive chemical reactions occurring in the retina. Several separate and parallel pathways code its processing at multiple sites in the nervous system.

Disruption in these pathways and their clinical manifestations offers crucial diagnostics for an underlying disease.[1]

The optic pathway begins in the retina, which is a complex structure made up of ten different layers. Each layer serves a distinct function.

The photoreceptor layers consist of the rods and cones, which generate action potentials with the help of rhodopsin through photosensitive cycles.

The ganglion cell layer and nerve fiber layer serve as the foundation of the optic nerve; the former contains the cell bodies, and the latter contains the axons as they stream across the retina. It consists of two types of fibers, namely temporal and nasal fibers, which control the nasal and temporal parts of the visual field, respectively. These fibers join together at the optic disc and are redirected posteriorly out of the eye to form the orbital part of the optic nerve. The nerve is surrounded by the dura, which is in continuation of that of the brain, allowing free movement of CSF between the eye and the intracranial vault.

The axons exit the orbit through the orbital foramen, simultaneously with the ophthalmic artery and sympathetic fibers.

It then enters the optic canal, a bone-encased tunnel intended to protect the nerve. It exits into the middle cranial fossa to form the intracranial part of the optic nerve. This continues till the two optic nerves join together to form the optic chiasm directly behind and above the pituitary stalk. Here more than half of the nasal fibers from the left eye decussate to join the temporal fibers of the right eye and form the right optic tract and vice versa. This anomaly helps eye healthcare professionals in the assessment of the site of the lesion along the visual pathway, which produces well-described visual field defects, also known as hemianopias, posterior, or at the chiasm.

Beyond the chiasm, the pathway continues as two distinct tracts, each carrying the temporal fibers from the other eye.

The optic tract then passes posteriorly where most of the axons synapse in the layers of the lateral geniculate body (LGB) of the midbrain, which is a posterolateral extension of the thalamus; with a minority passing into the superior colliculus and Edinger-Westphal nuclei; these fibers allow for parasympathetic innervation of the pupil, i.e., pupillary constriction.

The majority of the fibers pass posteriorly to become the genico-calcarine tracts, which have both parietal and temporal loops in the form of the dorsal optic radiation and Meyer's loop and terminate into the cuneus gyrus and lingual gyrus of the primary visual cortex, respectively (Broadmann area number 17).

The parasympathetic system constricts the pupil to protect itself when light intensity increases to an uncomfortable level by decreasing the amount of light entering the eye.

The optic nerve directs the afferent limb of the reflex pathway. Light stimulates the retinal ganglionic cells. The impulses travel through the optic nerve (CN II), which projects bilaterally to the pretectal nucleus in the midbrain, and then projects to the Edinger-Westphal nucleus.

One interesting point to note here is that the pretectal nucleus supplies the Edinger-Westphal nucleus bilaterally; hence, shining light in one eye causes ipsilateral and contralateral constriction of the pupil. This is known as the consensual light reflex.

The sympathetic system governs the fight-or-flight response. In the case of vision, mydriasis and elevation of eyelids are the two primary responses.

It originates in the hypothalamus, sending fibers into the cervical spinal cord to synapse in the upper thoracic spinal cord through the brainstem. Second-order neurons then pass out of the spinal cord, enter the thoracic ganglia and run superiorly until they reach the superior cervical ganglion, where they again synapse. Third-order neurons form a latticework around the internal carotid artery, form the long ciliary nerves on entering the skull, and eventually enter the eye to innervate the pupil dilator and Muller’s muscle, which helps the levator palpebrae superioris to elevate the eyelid.

Conjugate gaze is of equal importance to the visual system, as is the ability to see.

The abduction of the eye is performed by the lateral rectus, the primary adductor of the eye, which is innervated by the abducens nerve.

This action is controlled in the frontal eye field areas of the frontal lobes. Axons from this region project down to the abducens nucleus of the brainstem, where they synapse and decussate to form the medial longitudinal fasciculus (MLF), which then synapses with the oculomotor nucleus.

At week three of gestation, the appearance of optic grooves from the developing forebrain marks the first sign of eye development. As the neural folds fuse, the optic grooves evaginate, forming the optic vesicle.

Subsequently, the optic vesicle invaginates and forms the optic cup at about four weeks of gestation; this will become the retina. The inner and outer layers are due to the invagination process. They form the pigmented and the neural layers, respectively.

Axons of the neural layer then proliferate into the optic stalk, causing obliteration of the lumen; this forms the optic nerve.

A multitude of factors such as chondroitin sulfate proteoglycans (CSPGs), netrin signaling, and Slit proteins have been shown to play a role in guiding optic axons to their target nuclei within the brain.[4][5]

Branches of the internal carotid artery supply the majority of the visual system. The retina and the extracranial part of the optic nerve receive their blood supply from the ophthalmic artery.

The optic tract is perfused by the posterior communicating and anterior choroidal arteries.

The optic nerve is one of the ways followed by the glymphatic system to drain a part of the cerebrospinal fluid.

The ophthalmic veins drain the back, top, and bottom of the orbit. Their congestion and, therefore, their inadequate drainage produces retro-ocular headache, heavy and pulsating eyes. They pass through the sphenoid fissure, also known as the upper orbital fissure, and continue into the cavernous sinus.

Motor output of the eyeball is by cranial nerves III, IV, and VI. These supply the extraocular muscles and initiate the movement of the eye.

Intrinsic muscles of the eye are present in the iris, a radial group called the dilator pupillae, and a circular group called the sphincter pupillae. They control dilation and constriction of the pupil, respectively.

Individuals vary substantially in the relative sizes of the components of the central visual system.

In the blind population, various determinants could influence post-chiasmal visual anatomy. These include differences in the method of braille reading, involvement of the retinal ganglionic cells, and, most importantly, light sensitivity and visual fields.[6]

The optic nerve is commonly injured during posterior ethmoidectomy and sphenoid dissection.

Visual cortex injury occurs during resection of tumors and hematomas in the brain matter.[7]

The ipsilateral monocular visual loss can be permanent or transient. In the latter case, we speak of "amaurosis fugax" or "transient monocular blindness." Amaurosis fugax is generally due to interruption of blood flow (ischemia) at the level of the optical pathways, for example, caused by retinal embolism or by severe homolateral carotid atheroma stenosis (usually near the common carotid artery bifurcation) or other causes of ischemia in the visual cortex or optic nerve. Possible causes are:

In some cases, amaurosis fugax is idiopathic: it is not possible to highlight the cause of this manifestation, particularly in young subjects. In such cases, a spasm of the central artery of the retina is often thought of as an etiological factor.

The scotoma can be relative or absolute; in the first case, the alteration is related to a decrease in the sensitivity of the retina (one is no longer able to perceive some or all colors, except for white), while in the second case, this sensitivity, in some areas, is of the all absent (the image is no longer perceived or in any case, perceived minimally). The disorder can affect one or both eyes. The term derives from the Greek ("skotos," darkness, dark). The scotoma can also be negative or positive; in the first case, it is a non-vision area within the visual field (the subject perceives a dark spot on the fixed objects). In the second case, there is the perception of an intermittent bright spot of variable color. A scotoma is generally referred to as a pathological alteration of vision, but it should be specified that there is also a physiological scotoma, the so-called blind spot or blind area of Mariotte; it is a point of the eye where vision is absent, the so-called optical papilla, an area where photoreceptors are absent. Examination of the visual field (campimetry), the scotoma is graphically represented as a black area located centrally or peripherally). Scotoma is one of the symptoms of various diseases affecting the functionality of the eye, and the ocular structures involved may be different; the main causes include:

In some cases, the scotomas are secondary to brain tumors, ischemias, or intoxications; it is one of the main manifestations of migraine with aura. In many cases, it is the symptom that precedes the attack. In rare cases, the disorder has an iatrogenic origin. That is, it is caused by taking some medicines (for example, streptomycin). There are other classifications of scotoma: sparkling scotoma (a dark spot surrounded by small colored stripes with intermittent brightness); central scotoma (a dark-colored spot in the center of vision and can be a senile maculopathy, an infectious or inflammatory process); central-cecal scotoma (affects both the central fixation point and the blind spot; normally the area involved is small, but then tends to grow); peripheral scotoma; paracentral scotoma; annular scotoma; Bjerrum scotoma (the blind area has an arched shape).

Glaucoma: Glaucoma is a disease that is characterized by the degeneration of the optic nerve. The classic finding is optic disk atrophy with cupping, which means the outer portion of the optic nerve is thinning. The most common cause of glaucoma is an increase in the intraocular pressure (IOP); however, it is not necessary to have a high IOP to diagnose it.

Vigabatrin: Vigabatrin is an anti-epileptic drug used to treat refractory, complex partial seizures in adults who have failed. Vigabatrin has been shown to cause permanent peripheral visual field loss. Although the mechanism for how this happens is not fully understood, it most likely involves the toxicity of both retinal photoreceptors and ganglion cells.[9][10]

There is a capsule of connective tissue that fuses with the optic sheath posteriorly and then meets the intermuscular septum anteriorly, forming an envelope. This structure is known as the capsule of Tenon.  It helps the globe to stay positioned in orbit.[11] 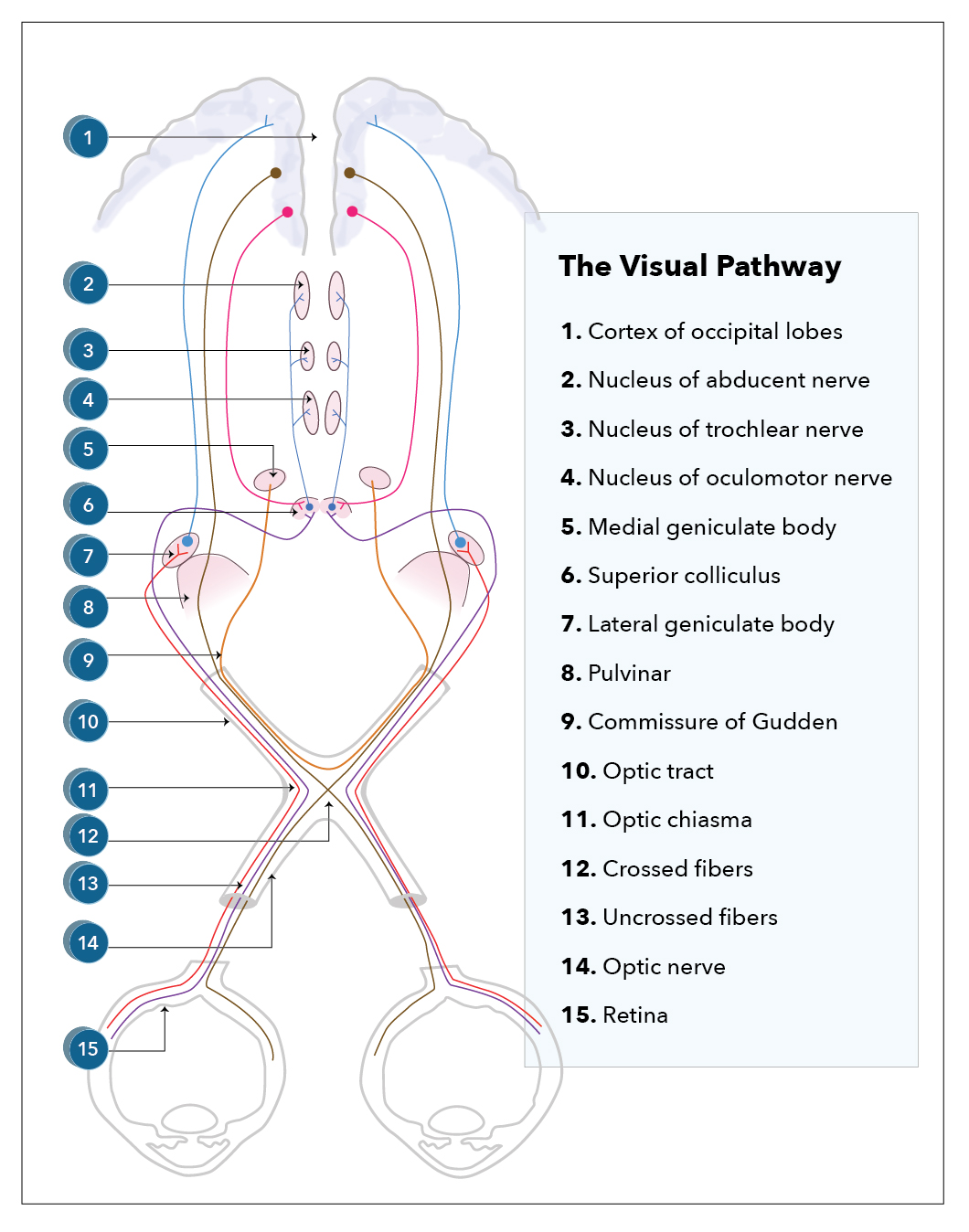