Chickenpox or varicella is a contagious disease caused by the varicella-zoster virus (VZV). The virus is responsible for chickenpox (usually primary infection in non-immune hosts) and herpes zoster or shingles (following reactivation of latent infection). Chickenpox results in a skin rash that forms small itchy blisters which scab over. This activity describes the cause, presentation, and pathophysiology of chickenpox and highlights the role of the interprofessional team in the treatment and prevention of this infection.

Chickenpox or varicella is a contagious disease caused by the varicella-zoster virus (VZV). The virus is responsible for chickenpox (usually primary infection in non-immune hosts) and herpes zoster or shingles (following reactivation of latent infection). Chickenpox results in a skin rash that forms small, itchy blisters, which scabs over. It typically starts on the chest, back, and face then spreads. It is accompanied by fever, fatigue, pharyngitis, and headaches which usually last five to seven days. Complications include pneumonia, brain inflammation, and bacterial skin infections. The disease is more severe in adults than in children. Symptoms begin ten to 21 days after exposure, but the average incubation period is about two weeks.

Chickenpox is a worldwide, airborne disease that is spread by coughing and sneezing, and also by contact with skin lesions. It may start to spread one to two days before the rash appears until all lesions are crusted over. Patients with shingles may spread chickenpox to those who are not immune through blister contact. The disease is diagnosed based on the presenting symptoms and confirmed by polymerase chain reaction (PCR) testing of the blister fluid or scabs. Tests for antibodies may be performed to determine if immunity is present. Although reinfections by varicella may occur, these reinfections are usually asymptomatic and much milder than the primary infection.

The varicella vaccine was introduced in 1995 and has resulted in a significant decrease in the number of cases and complications. It prevents about 70% to 90% of infections and 95% of severe disease. Routine immunization of children is recommended. Immunization within three days of exposure may still improve outcomes in children. [1][2][3]

Chickenpox or varicella is caused by the varicella-zoster virus (VZV), a herpesvirus with worldwide distribution. It establishes latency after primary infection, a feature unique to most herpes viruses. [4]

It is acquired by inhalation of infected aerosolized droplets. This virus is highly contagious and can spread rapidly. The initial infection is in the mucosa of the upper airways. After 2-6 days, the virus enters the circulation and another bout of viremia occurs in 10-12 days. At this time the characteristic vesicle appears. IgA, IgM, and IgG antibodies are produced but it is the IgG antibodies that confer life long immunity. After the primary infection, varicella localized to sensory nerves and may reactivate later to produce shingles.

Varicella occurs in all countries and is responsible annually for about 7000 deaths. In temperate countries, it is a common disease of children, with most cases occurring during the winter and spring. In the United States, it accounts for more than 9000 hospitalizations annually. Its highest prevalence is in the 4 to 10-year-old age group. Varicella has an infection rate of 90%. Secondary cases in household contacts tend to have more severe disease than primary cases. In the tropics, varicella tends to occur in older people and may cause more serious disease. Adults will get deep pock marks and more prominent scars.[5][6][7]

Exposure causes the production of host immunoglobulin G, M, and A. IgG antibodies persist for life and confer immunity. Cell-mediated immune responses are important in limiting the duration of primary varicella infection. After primary infection, it is theorized varicella spreads to mucosal and epidermal lesions to local sensory nerves. It then remains latent in the dorsal ganglion cells of the sensory nerves. The immune system keeps the virus in check but reactivation can still occur later in life and results in the clinically distinct syndrome of herpes zoster (shingles), postherpetic neuralgia, and sometimes Ramsay Hunt syndrome type II. Varicella zoster can harm the arteries in the neck and head, resulting in a stroke.

The prodromal symptoms in adolescents and adults are aching muscles, nausea, decreased appetite, and headache followed by a rash, oral sores, malaise, and a low-grade fever. Oral manifestations may precede the skin rash. In children, the illness may not be preceded by prodromal symptoms, and the initial sign could be a rash or oral cavity lesions. The rash begins as small red dots on the face, scalp, torso, upper arms and legs. Over the next ten to 12 hours it progresses to small bumps, blisters, and pustules; and eventually umbilication and scabs formation. Of note, the rash of chickenpox occur in crops and are typically at different stages of evolution.

At the blister stage, intense pruritus is present. Blisters may occur on the palms, soles, and genital area. Commonly, visible evidence develops in the oral cavity and tonsil areas in the form of small ulcers which can be painful and itchy; this enanthem may precede the external exanthem by one to three days. These symptoms appear ten to 21 days after exposure. Adults may have a more widespread rash and longer fever, and they are more likely to develop pneumonia, the most important complication in adults.

Because watery nasal discharge containing live virus precedes exanthems by one to two days, the infected person is contagious one to two days before recognition of the disease. In the majority of cases, the infection resolves itself within two to four weeks.

A common complication is a secondary bacterial infection that can present as cellulitis, impetigo or erysipelas.

Disseminated primary varicella is usually seen in immunocompromised individuals and carries a very high mortality. CNS complications are rare but may present as Guillain barre syndrome or encephalitis.

Primary varicella infection during pregnancy can also affect the fetus, who may present later with chickenpox. In addition, the virus also has the potential to cause the varicella congenital syndrome.

The diagnosis of varicella infection is primarily based on the signs and symptoms. Confirmation is by examination of the fluid within the vesicles, scraping of lesions that have not crusted or by blood for evidence of an acute immunologic response. Polymerase chain reaction (PCR) has the highest yield and can be utilized for non-skin samples such as bronchoalveolar lavage sample and cerebrospinal fluid. Direct fluorescent antibody testing has largely replaced the Tzanck test. The vesicular fluid can also be cultured, but the yield is low compared to PCR.  Blood tests are used to identify a response to acute infection (IgM), previous infection, and subsequent immunity (IgG). Prenatal diagnosis of fetal varicella can be performed using ultrasound, though a delay of 5 weeks following primary maternal infection is advised. A PCR (DNA) test of the amniotic fluid can be performed, though the risk of spontaneous abortion due to amniocentesis is higher than the risk of the baby developing fetal varicella. [10][11]

Treatment is symptomatic relief of symptoms. As a protective measure, those infected are usually required to stay at home while they are infectious. Keeping nails short and wearing gloves may prevent scratching and reduce the risk of secondary infections. [12][13][1]

Topical calamine lotion may relieve pruritus. Daily cleansing with warm water will help avoid secondary bacterial infection. Acetaminophen may be used to reduce fever. Avoid aspirin as it may cause Reye syndrome. People at risk of developing complications and who have had significant exposure may be given intramuscular varicella-zoster immune globulin, a preparation containing high titers of antibodies to varicella-zoster virus, to help prevent the disease.[14]

The varicella-zoster immunoglobulin is used to manage patients who are immunocompromised. In addition, a live attenuated vaccine has been available since 1995. There is high seroconversion following the vaccine which is long lasting. Adverse effects of the vaccine are rare.

In healthy children, the prognosis is excellent. However, in immunocompromised individuals, the infection has high morbidity.

Chickenpox is rarely fatal. Non-immune pregnant women and those immunocompromised are at highest risk. Arterial ischemic stroke associated with childhood chickenpox is a significant risk. Varicella pneumonia is the most common cause of fatality in adults (10% to 30%), and in those requiring mechanical ventilation, this may reach 50%.

If maternal infection occurs seven days before delivery and up to eight days following birth, the baby may develop neonatal varicella with presentation ranging from mild rash to disseminated infection. Newborns who develop symptoms are at a high risk of pneumonia and other serious complications.

Chickenpox is usually acquired after inhalation of aerosolized droplets from an infected individual. The majority of cases occurring in children less than 10. The key to lowering the morbidity of chickenpox is via education. Besides the primary caregiver, the nurse practitioner and pharmacist play a vital role in patient education. The parents of infected children should be told to trim the child's fingernails to avoid or minimize skin damage and the associated bacterial infections. Further, parents should be told not to give aspirin to young children to control fever, because of the risk of developing Reye syndrome. Finally, the parents should be told to apply cold compresses and keep the skin moisturized to prevent the itching and dryness.[15][16][17] All clinicians should urge parents to get their children vaccinated because this can prevent the morbidity associated with the infection. The vaccine is safe and very effective. Children who are immunocompromised should be referred to an infectious disease specialist for further management. (Level V) Clinicians should also educate pregnant women who are seronegative for chickenpox to avoid contacts with patients with an active infection. All pregnant women who develop chickenpox must be managed by a team of specialists who can make a decision regarding treatment.

For most children who develop chickenpox, the outcome is excellent. However, in immunocompromised individuals, there is increased morbidity and mortality. [18][19][20](Level V) 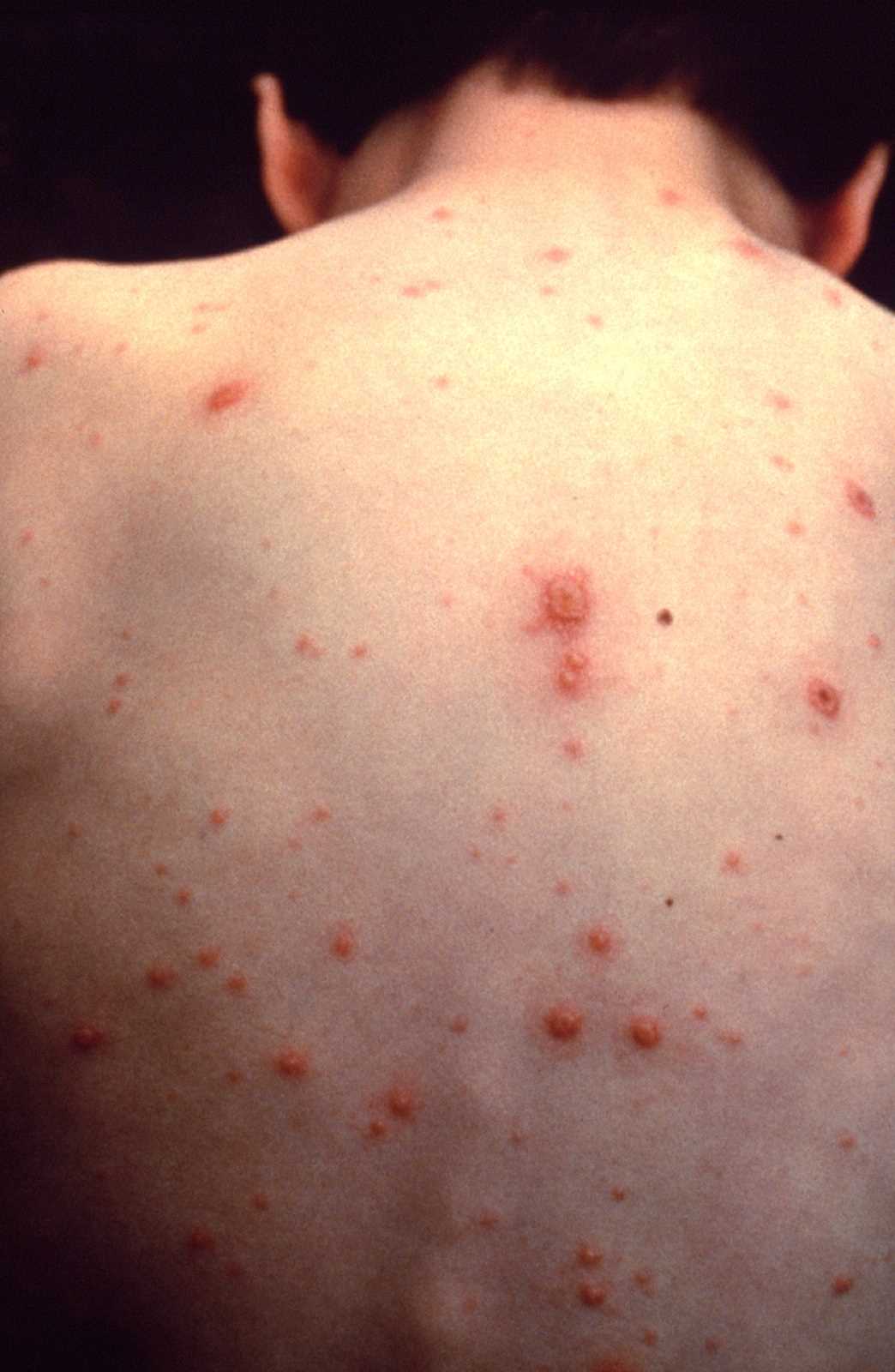 Hayward K,Cline A,Stephens A,Street L, Management of herpes zoster (shingles) during pregnancy. Journal of obstetrics and gynaecology : the journal of the Institute of Obstetrics and Gynaecology. 2018 Oct     [PubMed PMID: 29565203]