The pelvic cavity is a bowl-like structure that sits below the abdominal cavity. The true pelvis, or lesser pelvis, lies below the pelvic brim (Figure 1). This landmark begins at the level of the sacral promontory posteriorly and the pubic symphysis anteriorly. The space below contains the bladder, rectum, and part of the descending colon. In females, the pelvis also houses the uterus, fallopian tubes, and ovaries. Knowledge of anatomy unique to females is essential for all clinicians, especially those in the field of obstetrics and gynecology.

The uterus sits in the center of the female pelvic cavity (Figure 2.) The most common position of the uterus in the pelvic cavity is anteverted and anteflexed.[1] "Version" refers to the angle between the cervix and the vagina. An anteverted uterus appears "tipped forward" in the pelvic cavity. A retroverted uterus is "tipped backward." Retroversion is a normal variant but can lead to dyspareunia. Additionally, retroversion of a gravid uterus correlates with higher rates of vaginal bleeding and spontaneous abortion.[2]

"Flexion" is the term for the angle between the cervix and uterine body. Anteflexed means the uterus is bent forward. Retroflexed means the uterus bends backward. Occasionally, retroflexion is seen after cesarean section and may be due to scar tissue that attaches the uterine body to the abdominal wall, causing the fundus to bend posteriorly.[3] However, the data supporting this theory is limited.

Anterior to the uterus is the bladder, with rectum located posteriorly. Between the uterus and the rectum is the recto-uterine space, also known as the posterior cul-de-sac. It is a potential space prone to fluid collection. Small amounts of physiologic fluid accumulate during ovulation and menses. Pathologic causes of fluid collection in the recto-uterine pouch include pelvic abscesses, drop metastasis from gastrointestinal malignancies, and endometriosis. In certain situations, if fluid accumulation is severe, this space can be drained by performing a culdocentesis, which is accomplished by inserting a needle through the posterior fornix of the upper vagina to access the posterior cul-de-sac.

The posterior cul-de-sac communicates with the retroperitoneal space of the abdomen via the right and left epiploic gutters. The right gutter leads to the hepatorenal space, also known as Morrison's pouch. The right epiploic gutter also allows the spread of pelvic pathogens into the subphrenic space. Occasionally infection of the subphrenic space can occur, leading to adhesions on the capsule of the liver. This pathology is known as Fitz-Curtis-Hugh syndrome or gonococcal perihepatitis.

The left epiploic gutter leads to the splenorenal pouch. Due to the leftward position of the rectum, pelvic pathology is less likely to spread to the abdomen via the left epiploic communication.[4]

The organs of the female reproductive tract each have a unique embryological origin. The exact embryological timeline in which these organs develop is still open to debate because most embryologic studies use animal models with different gestational ages. However, there is a consensus that the ovaries are the first to develop. They arise from the surface of the mesonephros at the gonadal ridge.[5] Later in development, the ovaries descend into the pelvis with guidance from the gubernaculum. The inferior aspect of the gubernaculum subsequently becomes the round ligament of the uterus and terminates at the labia majora.

In females, the absence of a Y chromosome allows the uterus to form. It derives from the Müllerian ducts, also known as the paramesonephric ducts. These ducts fuse to form the uterus, fallopian tubes, and cervix. Some studies suggest that the paramesonephric ducts also give rise to the upper vagina while other studies indicate that the vagina exclusively derives from the urogenital sinus epithelium.[6] In males, a substance coded for on the Y chromosome, known as the anti-Mullerian hormone, prevents the formation of internal female reproductive organs.

The anterior branch of the internal iliac artery supplies most of the female reproductive organs. The uterine artery supplies the majority of the uterus (Figure 3). The lower uterine segment has a dual blood supply that includes branches of the vaginal artery. The ovaries are an exception because they receive blood from the ovarian arteries, which descend from the abdominal aorta.

The left-sided venous supply is also unique because the left internal iliac artery travels from its right-sided origin at the inferior vena cava towards a leftward destination in the pelvis. The longer path makes the left internal iliac more prone to compression and may explain why venous thromboembolism in pregnancy most commonly occur in the left iliac and iliofemoral veins.[8] Additionally, the leftward position of the sigmoid colon causes a gravid uterus to tip toward the right, which is thought to increase the risk of iliac vessel compression further.

The lymphatic network of the pelvis is complex but is essential to understand when staging and treating gynecologic malignancies. Generally, the pelvic organs drain into the internal and external iliac lymph nodes (Figure 5).

The lymphatic drainage of the uterus is more complicated and remains somewhat ambiguous.[9] Some researchers suggest it may involve pelvic and para-aortic lymph nodes.[10] A more recent study from 2017 suggests that the uterus has two primary routes of lymphatic drainage, an upper pathway that drains to the external iliac and/or obturator lymph nodes and a lower pathway that drains to the internal iliac and/or presacral lymph nodes.[11]

The ovaries are an exception to the other female pelvic organs because they do not drain to pelvic lymph nodes. Their lymphatic drainage follows their blood supply; therefore they drain directly to the paraaortic lymph nodes.

The ovarian nerve innervates the ovary. Although previously thought only to contain sensory fibers, recent animal studies suggest this nerve also carries autonomic fibers that may play a role in hormone secretion and constriction of ovarian vessels.[12][13][14] Recent studies suggest that the cervix and upper vagina also have autonomic innervation; however, the role of autonomic innervation in this region remains unclear.[15][16] Sensory innervation to the cervix and upper vagina has been more widely studied and receives supply by the pelvic splanchnic nerves. The pudendal nerve supplies the sensory innervation of the lower vagina. Pudendal nerve blocks can be used to provide local pain relief to laboring women by using the ischial spines as landmarks. Although once the treatment of choice for labor pain, it is no longer commonly used due to the widespread use of epidural anesthesia.[17]

The inferior border of the pelvic cavity is the pelvic diaphragm. It is made up of a group of muscles. From posterior to anterior, these muscles include:

The uterine and ovarian arteries supply the majority of the female reproductive tract. The uterine artery, like many pelvic arteries, has a variable presentation. It most commonly arises from the anterior branch of the internal iliac artery and shares a common trunk with the obliterated umbilical artery.[19] One study that analyzed imaging from 218 patients reported this presentation in 80.7 % of cases.[20] The same study reported the uterine artery branched directly off of the internal iliac in 13.6% of cases, making this the most common variation. The second and third most common variations they found were direct branching from the superior gluteal artery and internal pudendal artery, respectively. These variations are necessary to be aware of during surgery as well as during uterine artery embolization.

Ovarian artery variants are less common, but case reports exist that detail unique aberrations. One case report found an aberrant ovarian artery arising from the external iliac artery.[21] Another study reported an ovarian artery that branched directly from the common iliac artery.[22] These variations are thought to be due to abnormal descent of the ovaries into the pelvis during embryological development and may also correlate to other differences.[23]

Several anatomical relationships are essential for surgeons to be aware of when operating in the female pelvis. For example, during a cesarean section, the bladder should always be identified to avoid iatrogenic cystotomy. This cautionary measure is especially the case in patients that have had a prior cesarean section because scar tissue can cause the bladder to adhere to the anterior uterine wall.

If hemorrhage does occur, knowledge of pelvic vasculature becomes crucial. If the bleeding vessel cannot be clearly identified, the internal iliac should be clamped below the origin of the superior gluteal artery. This method is preferred so that necrosis of the gluteal muscle does not occur.

When operating deeper in the female pelvis, identification of the ureter is also crucial. There are three major locations where this structure may exist. Beginning superiorly, the ureters descend into the pelvis posterior to the infundibulopelvic ligaments. The ureters maintain this relationship until approximately the level of the iliac vessels, where they begin to travel more medially.

As the ureters continue to travel inferiorly, the next important landmark is the transverse cervical ligament. The ureters dive under this structure. Awareness of this relationship is of considerable importance when performing a hysterectomy. A popular pneumonic used by medical students is, "water under the bridge."

After passing under the transverse cervical ligament, the ureters continue to travel medially toward the bladder. Their insertion into the inferior aspect of the bladder is the third major location they should undergo positive identification intraoperatively. The insertion points are also visible from inside the bladder itself, during cystoscopy; this is sometimes performed after pelvic surgery if an injury to the bladder is suspected.

Injury to the bladder can also occur during pelvic surgery from the vaginal approach. When operating in this plane, injury to the rectum is also a possibility because at this level the rectum is directly posterior to the vagina (Figure 6.) Avoiding bladder and rectal injury becomes increasingly difficult if the patient has pelvic organ prolapse, such as cystocele or rectocele.

Clinical correlates related to female pelvic anatomy can be summarized as follows: 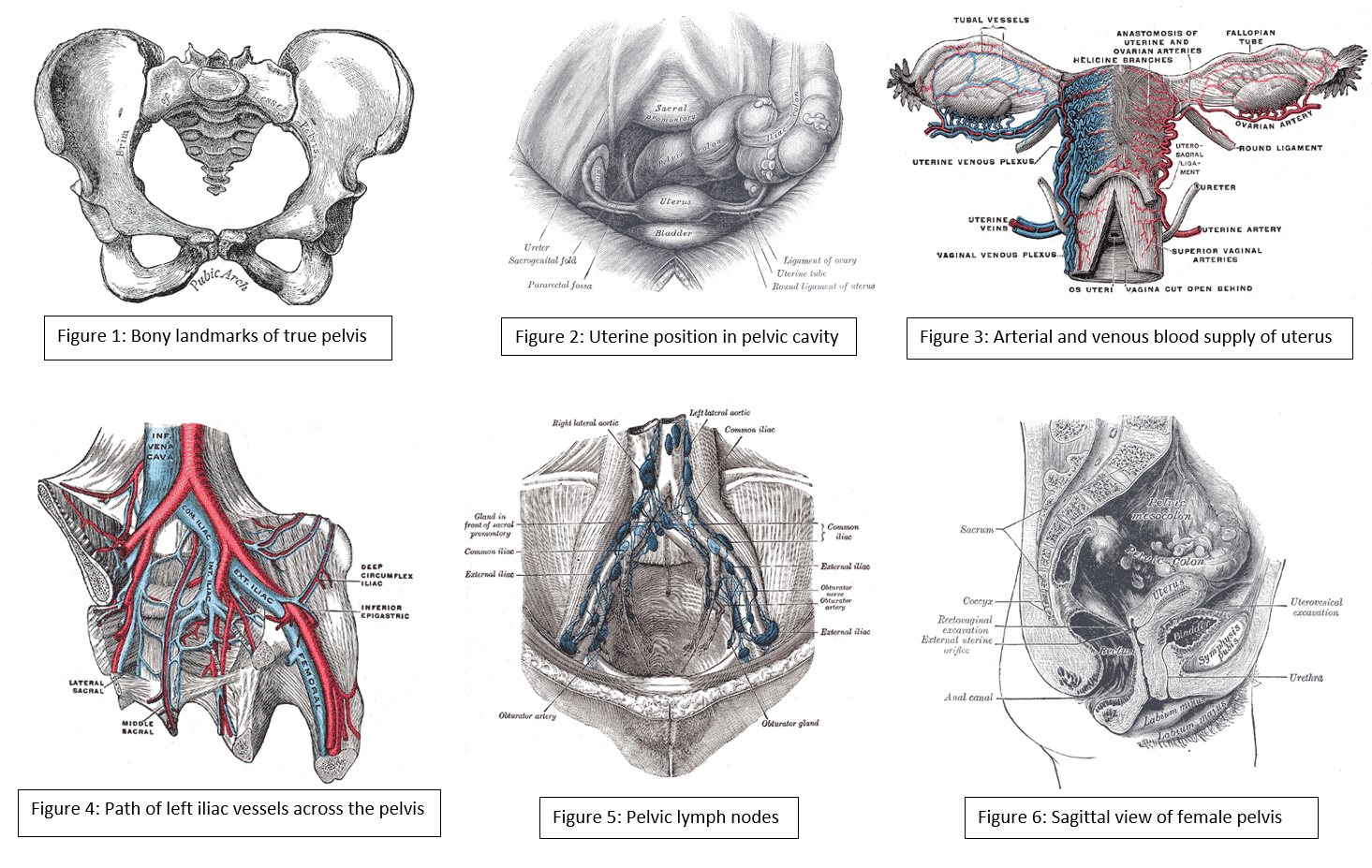