The trochlear nerve is the fourth cranial nerve (CN IV) and one of the ocular motor nerves that controls eye movement. The trochlear nerve, while the smallest of the cranial nerves, has the longest intracranial course as it is the only nerve to have a dorsal exit from the brainstem. It originates in the midbrain and extends laterally and anteriorly to the superior oblique muscle.[1]

Trochlea is Latin for pulley, which appropriately describes the sling of connective tissue that houses the tendon of the superior oblique. Moreover, the trochlear nerve is a somatic efferent (motor) nerve, and along with oculomotor (III) and abducens (VI) nuclei, it is responsible for eye movement. Through its innervation of the superior oblique, the trochlear nerve controls the abduction and intorsion of the eye.[1]

The trochlear nerve, as well as the abducens (VI), hypoglossal (XII), and oculomotor (III) nerves, is a homolog of the ventral roots of the spinal nerves. The somatic efferent columns of the brainstem give rise to these cranial nerves. The muscles that they innervate are derived from the cranial (preoptic and occipital) myotomes in early skeletal muscle development.

During the fourth week of development, the neural tube is composed of three primary vesicles, the prosencephalon, mesencephalon, and rhombencephalon. The mesencephalon goes on to develop into the midbrain. It is from the posterior part of the midbrain that the trochlear nerve originates. From here the nerve passes ventrally to innervate the superior oblique muscle.[2]

The midbrain is supplied by the posterior cerebral artery, superior cerebellar artery, and the basilar artery. As cranial nerve IV has a motor nucleus, it is located near the midline along the medial longitudinal fasciculus. A disruption in any of the aforementioned arterial structures could affect the medial midbrain, and thus, the trochlear nucleus.

The trochlear nerve pair originates from a pair of symmetrical trochlear nuclei within the medial midbrain at the level of the inferior colliculus. The left and right nerves then travel dorsally surrounded by the periaqueductal gray matter, decussating before their exit in the dorsal midbrain. The two nerves run on contralateral sides, extend laterally and then anteriorly around the pons, before penetrating the dura above the trigeminal nerve.

It enters the cavernous sinus where it runs anteriorly above the abducens nerve and ophthalmic branch of the trigeminal nerve. Here in the cavernous sinus, a few sympathetic fibers join the trochlear nerve with the possibility of some sensory fibers from the trigeminal nerve. The nerve then enters the orbit through the superior orbital fissure and continues to extend anteriorly to the superior oblique muscle.[1][3] The superior orbital fissure is also the nerve pathway for cranial nerves III, VI, and V and is vulnerable to shearing forces in the setting of trauma.

The only muscle the trochlear nerve innervates, the superior oblique muscle, is the longest and thinnest muscle among the extraocular muscles. The muscle belly originates from the back of the roof of the orbit near the common tendinous ring, but it takes an unusual course to reach the eye. The tendon extends between the orbital roof and passes through a fibrous loop (known as the trochlea) located on the frontal bone. The tendon then reaches laterally and posteriorly prior to its insertion point on the posterior half of the eye.

The most common cause of an isolated fourth nerve palsy is congenital.[5][6][7][8] These patients may commonly present with eye deviation and complain of diplopia and postural head changes. This characteristic head tilt is towards the unaffected side to compensate for a lack of intorsion from the superior oblique muscle. Congenital trochlear nerve palsies are almost always unilateral. These nerve palsies in children can be initially mistaken for torticollis because of the head tilt many of these children display.[9][10] Most commonly, this can be corrected surgically or with prism. A more conservative approach for minor deviations involves patching of one eye that can alleviate diplopia. However, if patients defer or fail initial therapy, surgical approaches include tucking of the superior oblique tendon or inferior oblique weakening.[11] Interestingly, there is evidence to suggest that congenital superior oblique palsy is more common in young males.[12]

Other significant, but less common, causes of fourth nerve palsy include microvascular disease, idiopathic, the mass effect from a tumor, or increased intracranial pressure. Microvascular trochlear nerve palsy usually occurs in the setting of diabetes in patients who are 50 years of age and older.[14] The nerve, however, is less affected compared to the other oculomotor nerves (CN III and CN VI). These nerve injuries are relatively transient with symptom resolution in a few months without treatment. Infrequently, trochlear nerve palsy may be caused by Lyme disease, Meningioma, Guillain-Barre Syndrome, Herpes zoster, and Cavernous Sinus Syndrome.

Lesions of the trochlear nerve can either involve the nucleus or the nerve, but both virtually present with similar symptoms. The only difference is that a unilateral trochlear nuclear lesion affects the contralateral nerve and superior oblique muscle, while a fascicular lesion affects the ipsilateral nerve and muscle. Most trochlear nerve palsies are unilateral. However, because the decussation of the trochlear nerve pair happens when the nerve pair is near each other, a single lesion at the dorsal midbrain can cause bilateral trochlear nerve palsy.[10] If other ocular motor nerves are involved in the patients’ symptoms, a lesion in the cavernous sinus or midbrain is most likely, as these nerves are relatively near each other in this space and share vascular supply.

Clinical presentation of acquired fourth nerve palsy is similar to that of congenital palsy. Patients may present most commonly with diplopia but can also present with blurry vision or a minor vision problem when looking down like reading a book or going down the stairs. The diplopia presented in trochlear nerve palsy is either vertical or diagonal and is worse with a downward gaze. Compensation for the nerve palsy usually includes a head tilt to the opposing side and tucking in the chin, so the affected eye’s pupil can move up and extort, instead of downwards and intort. During clinical examination, the eyes will display hypertropia with the affected eye being slightly elevated relative to the other normal eye. Under cover, the affected eye will show an upward drift relative to the other eye.[15] 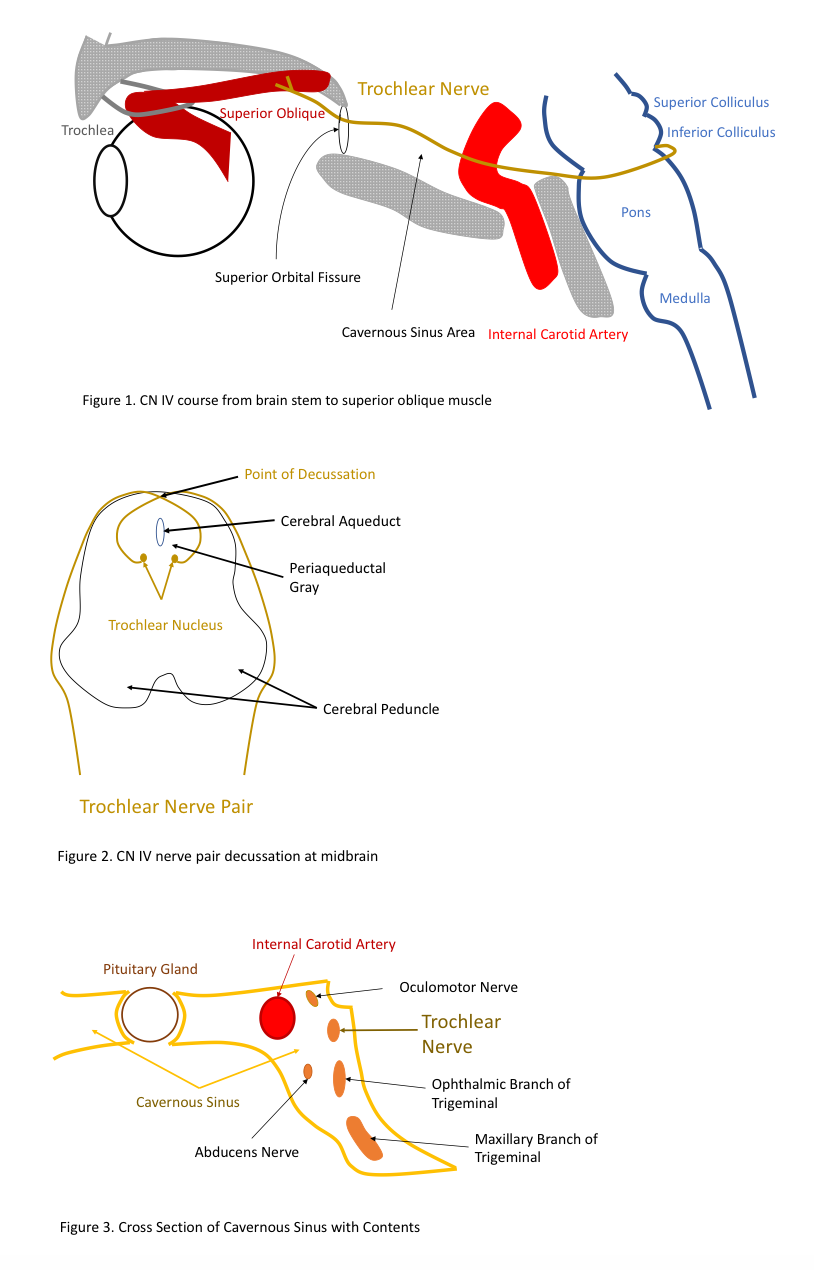 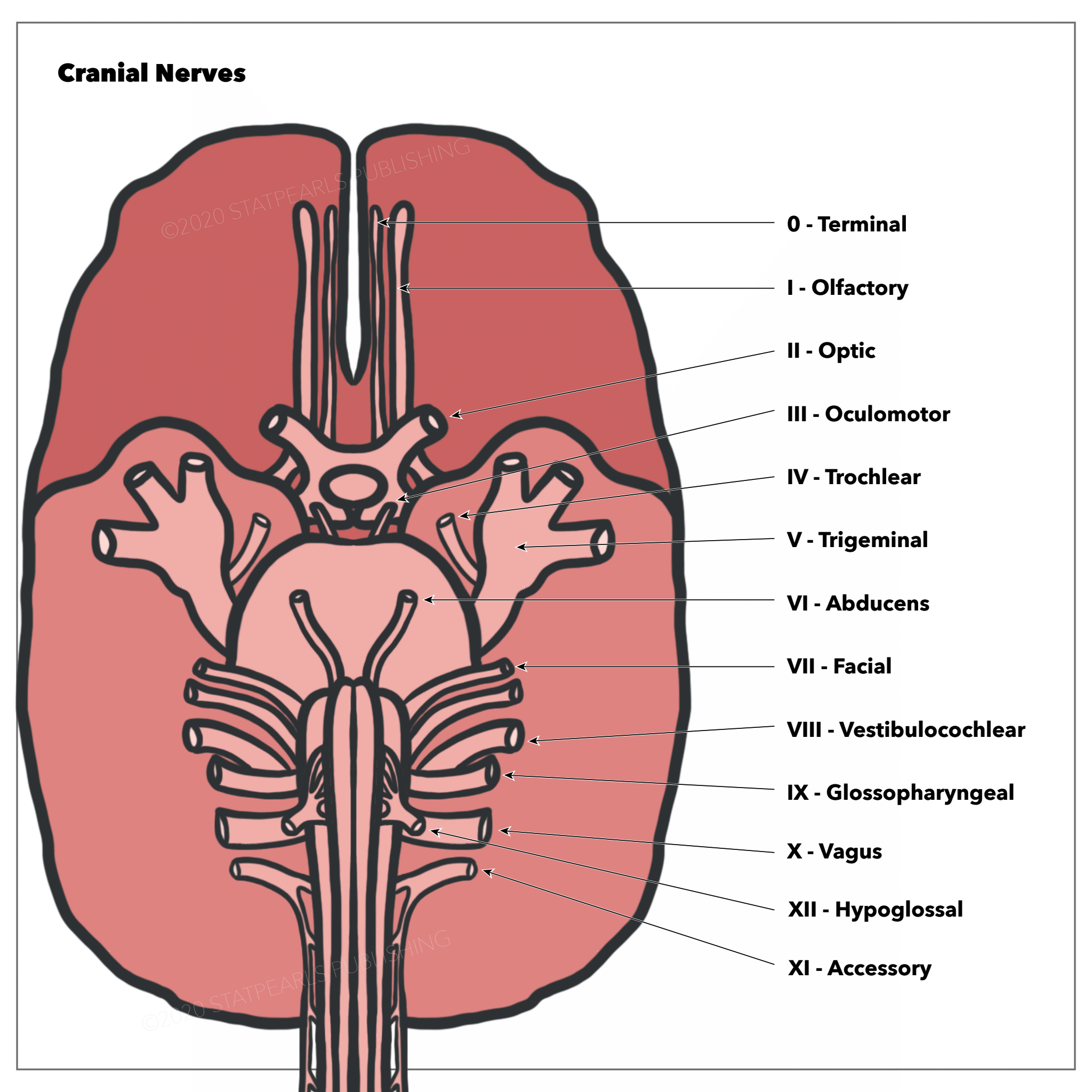