Gyromitra esculenta, the false morel mushroom, has a unique toxicity. The mushroom derives its name (esculenta) from the Latin for edible. Certain cultures, as well as many mushroom guides and websites, consider this mushroom safe to eat provided that proper preparation techniques, such as par-boiling, are used to reduce its toxicity. Unfortunately, several incidences of poisoning have been reported in foragers seeking and ingesting the Gyromitra esculenta. In general, most poisonings occur when foragers search for true morels, such as Morchella species, but instead find and consume Gyromitra. This activity describes the presentation of gyromitra poisoning and highlights the role of the interprofessional team in the management of patients with this disorder.

Gyromitra esculenta, the false morel mushroom has an unique toxicity. The mushroom derives its name (esculenta) from the Latin for edible. Certain cultures, as well as many mushroom guides and websites, consider this mushroom safe to eat provided that proper preparation techniques, such as par-boiling, are used to reduce its toxicity. Unfortunately, several incidences of poisoning have been reported in foragers seeking and ingesting the Gyromitra esculenta. In general, most poisonings occur when foragers search for true morels, such as Morchella species, but instead find and consume Gyromitra.

The Gyromitra syndrome consists of a gastrointestinal prodrome occurring more than 5 hours after eating Gyromitra esculenta. Acute liver injury can occur over the next 2 days in a significant percentage of cases, and acute kidney injury may occur to a lesser degree. Confusion characterizes acute central nervous system (CNS) toxicity. In the most severe instances, refractory seizures are a feared, but rare, a consequence of the pharmacology of gyromitrin’s toxic metabolite, monomethylhydrazine (MMH). Monomethylhydrazine binds to and inhibits pyridoxal phosphokinase, thereby inhibiting activation of vitamin B6 (as pyridoxal 5-phosphate) from functioning as the key co-factor in the synthesis of GABA. The subsequent depletion of GABA leads to CNS excitation and seizures.[1][2][3]

Gyromitra esculenta contains the toxin gyromitrin. Other species, such as Gyromitra gigas (Snow morel), and Gyromitra fastigiata may also have this toxin, but there have been no documented human poisonings from this species.[4]

Most poisonings occur in Eastern Europe, particularly in the conifer forests of Germany, Poland, and Finland. In North America, most exposures occur in Michigan, although a less toxic variety grows west of the Rockies and has been clustered in Idaho and Western Canada. Exposures occur mostly in the Spring, unlike other serious mushroom poisonings, such as Amanita phalloides, which occur more commonly in the fall.[5]

Over the centuries, poisonings due to consumption of gyromitra were recorded across those regions of Europe and the United States and, although the species name changed over time. Investigation of cases allowed for the identification of the mushroom and identification of its toxin. In France in 1793, poisonings were attributed to the then-named Morchella pleopus. In 1885, an extract from the same mushroom was named “helvellic acid," the toxin we now know as gyromitrin, as isolated by List and Luft of Germany in 1968, who identified the chemical nature and structure of the toxin.

Between 1994 to 2002, the Swedish poison center received 706 calls related to gyromitra mushrooms, with no fatalities.[9]

In the United States, from 2001 to 2011, poison centers received 82,140 calls related to mushrooms. Of these, 448 calls involved gyromitrin mushrooms. Over 30 years, the North American Mycological Society (NAMA) reported on 27 cases. None were fatal but nine developed liver injury and three acute kidney injury.

In the stomach, gyromitrin is metabolized to monomethylhydrazine (MMH), which is the active metabolite responsible for inhibiting many enzymatic processes, particularly by the inhibition of vitamin B6 (pyridoxine), a key cofactor for many enzymatic processes. Gyromitrin directly binds to and inhibits pyridoxal phosphokinase, the enzyme responsible for transforming dietary vitamin B6 (pyridoxine) into active pyridoxal 5-phosphate. Without the cofactor pyridoxal 5-phosphate, the CNS-enzyme glutamic acid decarboxylase (GAD) cannot convert glutamate to the neurotransmitter gamma-aminobutyric acid (GABA). As GABA is depleted, activation of inhibitory postsynaptic Cl- channel decreases, resulting in a relative excitatory state in the brain, leading to delayed seizures.

This inhibition of vitamin B6 activation is a similar mechanism of action to the anti-tuberculosis medication INH (isonicotinic acid hydrazide).

Other central enzymatic processes for which pyridoxine is a co-factor are:

While these may be inhibited, it is usually not clinically apparent.

Hydrazines, like MMH, may also form hydrazones and hydrazides that can cause further organ damage. Hydrazones induce lipid peroxidation in the liver causing cytotoxic effects and resulting in acute liver injury. Hydrazones may also be oxidizing agents capable of inducing methemoglobinemia. Although the potential for methemoglobin formation in humans is often mentioned as a possible toxic effect of gyromitrin mushroom consumption, only a single case report in a dog exists for this.

Other reported effects of gyromitrin are detailed in studies on rats. Gyromitrin in rats acts as a mild diuretic, with properties of natriuresis and kaliuresis, which may contribute to volume and electrolyte loss in humans. In addition, rats fed gyromitrin for long periods of time develop cancers of the liver, gallbladder, and lung. No definitive human cancer risk has been determined. [6][7]

Gyromitrin has the chemical formula C4H8N2O, and its chemical name is N’-ethylidene-N-methylformohydrazide.

Some websites and mushroom handbooks describe the technique of parboiling then drying, to detoxify the mushroom and render them edible. Patocka [2012] estimates that 99% of the gyromitrin can be removed by either drying or boiling the mushroom before eating it.

Michelot [1991] gives the values of an LD in humans (based on animal experiments) as 25 mg/kg to 50 mg/kg for adults and 10 mg/kg to 30 mg/kg for children. This roughly correlates to between 0.4 kg to 1.0 kg of fresh uncooked mushroom for an adult and 0.2 kg to 0.6 kg fresh mushroom for a child. These are unlikely amounts of mushroom to be ingested at one time.

Cooking hydrolyzes some gyromitrin, but after being ingested, gyromitrin is hydrolyzed rapidly in the stomach to N-methyl-N-formyl hydrazine (MFH), then converted in the liver by cytochrome P-450 oxidation into N-methylhydrazine (MMH). Of interest, this final chemical is also a component in rocket fuel, such as in the propellant mixture Aerozine-50 made by the Aerojet Company, which was used in Titan rockets.

Eleven other hydrazones, in lesser quantities, have been isolated from these mushrooms and may contribute to liver cytotoxicity.

A recent paper found that life-long foraging for gyromitrin mushrooms in the French Alps was associated with 14 cases of amyotrophic lateral sclerosis, compared with a cohort.[10]

History should ascertain when the mushrooms were eaten, as the time from ingestion to symptom onset can suggest clinical severity.  As with other mushroom poisonings, the classic 6-hour rule usually applies. Specifically, the onset of nausea and vomiting within 6 hours of ingestion suggests that the likelihood of systemic toxicity is low.  However, if vomiting begins after 6 hours, the risk is higher, and these patients often require intravenous (IV) fluid resuscitation and evaluation for signs of hepatic or renal injury.

Specifically concerning gyromitra, the onset of signs and symptoms of toxicity usually occur 5 to 12 hours after ingestion, generally adhering to the 6-hour rule. The most common presenting complaints are abdominal pain and nausea. Other historical features should focus on which mushrooms were being sought, the season of the year, and the amount consumed. Gyromitra mushrooms emerge in the Spring in temperate climate forest areas, often near pines and aspen trees. Some knowledgeable foragers may even know or recognize Gyromitra esculenta and have intentionally sought and consumed it. The number of mushrooms eaten is also significant as the severity of the patient’s toxicity is proportionally related to the quantity of the toxin ingested.

The physical exam should focus signs of dehydration and the neurologic exam.  Physical exam findings are often non-specific but may include dry mucous membranes, decreased bowel sounds, generalized abdominal tenderness, and confusion. Patients may also experience vomiting and watery diarrhea. Jaundice is a late finding, typically in more severe cases occuring after 3 days post-ingestion. Large ingestions may exhibit signs of central nervous system involvement, including nervousness, vertigo, ataxia, delirium, seizures, and altered mentation. Death, although extremely rare, has been reported as early as 3 days post-ingestion. Toxicity may often go unrecognized due to the vague presenting complaints and requires a high index of suspicion to make the appropriate inquiries about mushroom ingestion to establish the diagnosis.

The diagnosis of the gyromitra syndrome relies on associating the patient’s liver, renal, or CNS findings with a history of ingestion of the gyromitra mushrooms. Common lab findings in patients with gyromitrin toxicity include elevated transaminases, lactate dehydrogenase, and total bilirubin within 1 to 2 days of ingestion.  Liver transaminases (particularly AST) usually peak around 4 to 5 days post-ingestion. Elevated BUN and creatinine may also occur, reflecting acute kidney injury (AKI) secondary to vomiting and volume depletion. While CNS signs may vary from confusion to seizures, there are no findings on imaging modalities such as CT or MRI. However, should the patient experience status epilepticus, neuro-imaging would be warranted after the seizure is controlled.

Treatment should be initiated as early as possible, especially if there is a concern of progression to seizures. Initial treatment entails primarily supportive care with close attention to fluid and electrolyte balance.  Liver function tests, blood urea nitrogen, and serum creatinine should be monitored daily. [8]

Consultation with a regional poison center, a certified mycologist for mushroom identification, or a medical toxicologist are often needed.

Various laboratory techniques like gas chromatography-mass spectrometry and thin-layer chromatography have been used to identify MMH. However, these tests are not generally available outside research laboratories and have neither clinical utility nor correlation with overall toxicity.

Gyromitra poisoning is best managed by an interprofessional team that includes medical toxicologists and neurology nurses. The key is to start treatment immediately once CNS toxicity occurs, with close attention to liver function, electrolyte balance, fluid status and neurological status.

Patient education is key. The primary care provider and pharmacist should educate the patient on the potential toxicity of wild mushrooms. 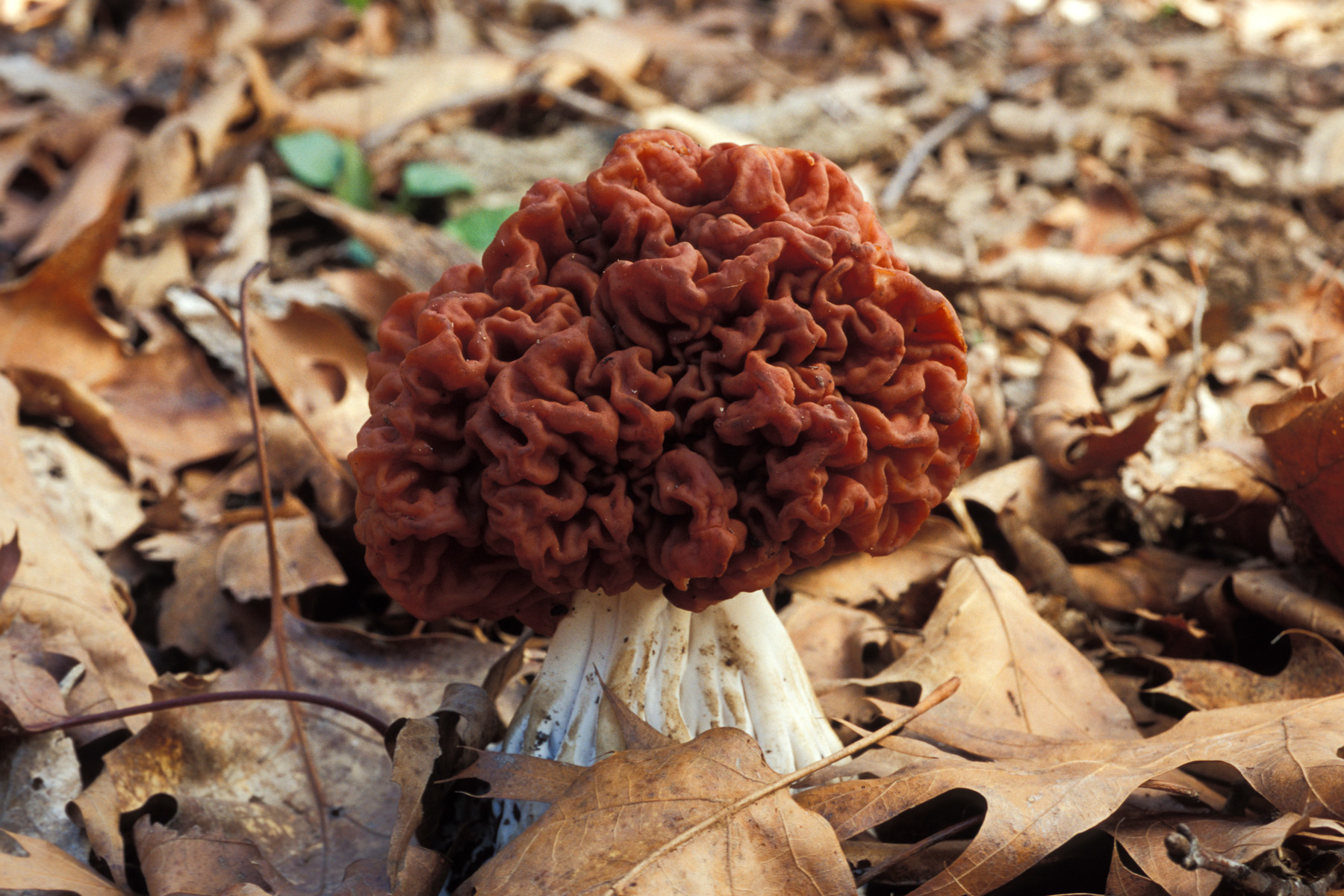 Zaraf'iants GN, [Forensic medical diagnostics of intoxication with certain poisonous mushrooms in the case of the lethal outcome in a hospital]. Sudebno-meditsinskaia ekspertiza. 2016 Jan-Feb;     [PubMed PMID: 27030094]