While there are multiple causes of syncope, many of these are neurally mediated. Some neurally mediated causes of syncope include vasovagal syncope, carotid sinus syndrome, and situational syncope. A tilt table test is a diagnostic procedure for patients in whom a neurally mediated syncope is suspected. It is also used to evaluate patients with unexplained recurrent falls, to distinguish neurally mediated syncope from syncope due to orthostatic hypotension, to diagnose psychogenic pseudo, and to distinguish syncope from epilepsy in certain patients. During the tilt table test, the patient is exposed to orthostatic stress, which may be exaggerated by nitroglycerine, clomipramine, and isoprenaline administration. This activity reviews the indications, contraindications, and techniques involved in performing the tilt table test and highlights the role of the interprofessional team in caring for patients undergoing this procedure.

During the test, the patient may present pseudo-syncope often manifested by a sudden silence, head dropping, and closed eyes, which can not be opened, even with force. In such a case, the patient can maintain an upright position, and blood pressure and heart rate are within normal limits.[4][5]

During a tilted position, blood flows into splanchnic and lower extremities veins. The blood volume in the central compartment is diminished. The nervous system increases the release of catecholamines and later activates the renin-angiotensin-aldosterone system and may increase the release of other neuropeptides like vasopressin, endothelin, and adrenomedullin to maintain homeostasis. The insufficiency of the autonomic nervous system and neurohumoral mechanism may lead to a decrease in blood pressure. Moreover, unknown mechanisms may trigger neurocardiogenic reflex, which may result in vasodilatation and cardio inhibition. Peripheral and central mechanisms may cause neurocardiogenic reflex.[6]

The reduced fluid intake increases the susceptibility to hemodynamic disturbances during the test. Furthermore, venous catheterization and the medical environment may facilitate the occurrence of the neurocardiogenic reflex.

The syncope may be preceded by prodromal symptoms like sweating, blurred vision, hot and cold flashes, weakness, loss of hearing, and nausea. Sometimes the loss of consciousness is sudden without prodromal symptoms even if the blood pressure and heart rate slowly decreased before syncope. The duration of unconsciousness is usually up to 20 seconds, but it may sometimes be longer, especially when tilt table downtime is prolonged or there is a very long pause of up to 60 seconds. During syncope, the patient's eyes are usually open, and urine incontinence, jerking movements, eye deviations, and vocalizations may occur. The patient is not able to maintain an upright position. If belts do not hold them, patients will fall. After regaining consciousness, a patient may recall some dreams, especially after a more extended period of unconsciousness.[7]

Some patients may deny the presence of loss of consciousness, but they admit that they do not recall the moment the tilt table lowered.

The patient may have nausea and vomiting after syncope. It usually lasts up to 15 to 30 minutes. Some patients report weakness after the test, which can last several hours, but often, the patient can stand up after 10 to 15 minutes.[8]

The tilt table test is an additional procedure performed after the initial evaluation of syncopal patients. The initial assessment consists of medical history, physical examination, orthostatic test (blood pressure in the supine position and after 1 to 3 minutes of standing), and a 12-lead electrocardiogram.[4][9][10]

The indications for the tilt table test include:

The tilt table test can be performed by a trained nurse or medical doctor or both of them according to the local law. The providers should be certified and able to give basic life support (BLS) if needed.

The patient should fast for at least 4 hours to avoid aspiration during vomiting in an unconscious state (which is rare). The examination may be performed when the patient is dressed in their usual clothes. The procedure and expectations should be explained to avoid unnecessary anxiety about the test. The patient should be informed about the risk of urinary incontinence or vomiting and have clothes to change into, if necessary.

Before tilt table testing, the patient should stay in the supine position for at least 5 minutes. A long time in the supine position is required if venous catheterization is to be done before the test. The patient should be wrapped to avoid falls and traumatic injuries. Venous catheterization is not mandatory before tilt testing.

The tilt table test should be performed according to the chosen protocol. There are a few protocols that can be used. The best-known in medical practice is the Westminster protocol or the Italian protocol. During the tilt table test, the passive phase is recommended to last 20 to 45 minutes. Later, medication is given (most commonly 0.4 mg nitroglycerine sublingually) to increase the sensitivity of the test, but the provocation reduces the specificity, and the patient should be in an upright position for up to 15 minutes.

The tilt table test should be terminated at syncope or after protocol termination. Some patients have prolonged hypotension without loss of consciousness, and in this case, the termination of tilt testing during the pre-syncopal period may be considered, especially in elderly patients.In the case of a positive result during the tilt table test, the patient should be asked about reproducing symptoms in his or her daily life. The downtime should be shorter than 10 seconds. Lowering the tilt table for a longer period may result in a longer loss of consciousness. The changes in blood pressure and heart rate should be assessed.

The tilt table test is a safe procedure. However, myocardial infarction or stroke may develop in persons with significant coronary or carotid artery stenosis. This is very rare. Arrhythmic complications may be represented by prolonged bradycardia, which may be treated with atropine. Ventricular fibrillation is extremely rare. Some patients may vomit after tilt testing or have severe weakness lasting for several hours. A headache is common, especially after nitroglycerine use. A few seconds of extremity myoclonus is common after syncope is noted before returning to consciousness (convulsive syncope). This should not be confused by the providers for seizures.[11]

The cardioinhibitory component of neurocardiogenic reflex provoked during tilt testing is a significant concern for attending doctors because the decision to pace or not to pace needs to be considered. The proper management of patients with a cardioinhibitory form of neurocardiogenic reflex is still a matter of debate. Cases of pacemaker implantation in young people with a single syncopal event were reported during cardiology conferences. They were justified by the doctors who worry about the risk of cardiac arrest. However, this approach may lead to infectious complications, need for future reimplantation procedures, reduced quality of life, anxiety, and depression. The cardioinhibitory component may be related both to inhibition of sinus node presenting as sinus bradycardia or sinus standstill or inhibition of an atrioventricular node presenting as an atrioventricular block. The patients with an atrioventricular block during neurocardiogenic reflex provoked by tilt table tests have shorter prodromal symptom duration. They tend to have a longer PR interval on an electrocardiogram at baseline. At present, the appropriateness of pacing the patients with tilt table test induced asystole should be assessed in a clinical context. Elderly patients may be considered to be paced because of the risk of overlapping sick sinus syndrome or concealed dysfunction of the atrioventricular node. Pacing in patients at an age younger than 40 years is usually not indicated.

Clinicians should be aware that the tilt table is not 100% sensitive in making a diagnosis of syncope; other methods of evaluating the patient should also be undertaken. 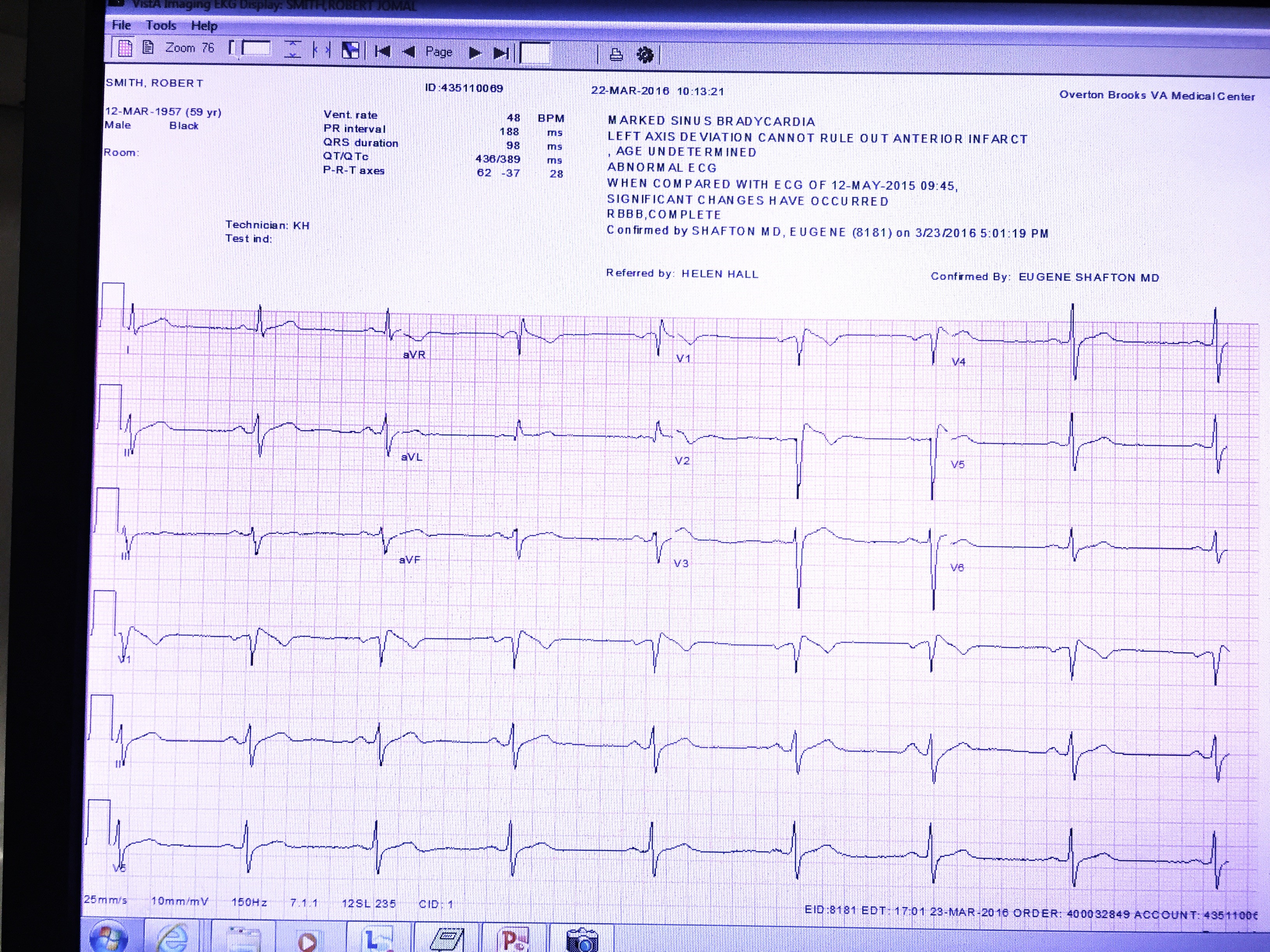 Electrocardiogram of patient with syncope.
Contributed by Dr. Dherange

Buszko K,Kujawski S,Newton JL,Zalewski P, Hemodynamic Response to the Head-Up Tilt Test in Patients With Syncope as a Predictor of the Test Outcome: A Meta-Analysis Approach. Frontiers in physiology. 2019;     [PubMed PMID: 30899228]

Hutt Centeno E,Mayuga KA, What can I do when first-line measures are not enough for vasovagal syncope? Cleveland Clinic journal of medicine. 2018 Dec;     [PubMed PMID: 30526751]