The tibialis posterior muscle (TPM) is the deepest muscle of the deep posterior compartment of the lower leg. Its long muscle belly arises from the posterior aspect of the interosseous membrane and superior two-thirds of the posterior and medial surface of the fibula, and the superior aspect of the proximal tibia. The TPM tendon inserts distally onto many attachment points on the plantar surface of the foot. The muscle is primarily responsible for plantar flexion and inversion of the foot and receives its arterial blood supply and innervation from the posterior tibial artery and tibial nerve, respectively.

Once the TPT travels distal to the medial malleolus, it courses along the plantar aspect of the foot, where it splits into three components: primary, plantar, and recurrent. This split allows for the broad attachment site of the tibialis posterior tendon (TPT). The main portion inserts primarily onto the navicular bone tubercle as well as the plantar sections of the medial cuneiform. The plantar portion inserts onto the base of the second, third, and fourth metatarsals along with the second and third cuneiform and the cuboid. Finally, the recurrent portion has a small insertion site at the sustentaculum tali of the calcaneus.

The plantar insertions of the tibialis posterior allow for support of the medial arch of the foot. The medial arch in a normal person is higher than the lateral arch and is maintained by the following bones: calcaneus, talus, navicular, three cuneiforms, and the first three metatarsals.[5]

The tibialis posterior muscle, a muscle of the posterior compartment of the lower limb, is formed beginning at four weeks of gestation as a primary limb bud. Limb buds begin as undifferentiated mesenchyme (mesoderm) with an epithelial (ectoderm) covering; they are paddle-shaped structures that grow outwards gradually under the influence of local growth factors. By eight weeks of gestation, the skeletal muscle that derives from somites at the level of the limb buds is well-formed.[6]

The posterior tibial artery gives off the fibular (peroneal) artery, which courses deep to the flexor hallucis longus and gives off muscular branches to supply some of the posterior compartment before entering its primary destination, the lateral compartment of the lower leg.[8][9][10]

The tibialis posterior tendon (TPT) can have variable insertion patterns. It can have three separate tendons known as the main, plantar, and recurrent tendons, or it can have one wide tendon that inserts onto the same bones on the plantar surface of the foot.

The tibialis posterior tendon (TPT) can become inflamed and irritated due to an acute injury, such as a fall, or overuse during high-impact sports such as basketball, tennis, or soccer.  Acute on chronic bouts of recurrent tendinitis propagates the tendinopathic cascade, potentially leading to posterior tibial tendon insufficiency (PTTI).

The pathophysiology underlying PTTI entails the progressive loss of the medial longitudinal arch, compromising its ability for dynamic stabilization of the foot. Later stages of PTTI and arch collapse eventually lead to attritional failure of static hindfoot stabilizers, including compromise to the spring ligament complex (superomedial calcaneonavicular ligament), the plantar fascia, and plantar ligamentous support structures.[13] PTTI is the most common cause of adult-acquired flatfoot deformity (AFFD).

Patients often present secondary to pain and progressive dysfunction. Observation of the foot highlights a spectrum from flexible (early) to rigid (end-stage, degenerative) deformities.  The patient should be observed clinically during normal gait posturing as well as statically and dynamically. The patient is asked to stand during the examination, and when viewed from the back, the examiner may be able to appreciate the "too many toes sign," referring to the lateral deviation of the toes relative to the hindfoot.  The spectrum of PTTI foot deformity and characteristic posturing categorizes into the following descriptions:

Acute compartment syndrome (ACS) occurs secondary to traumatic (e.g., fractures), iatrogenic (e.g., external sources of cast/dressing compression), or comorbid medical conditions (e.g., bleeding disorders). Regardless of the underlying etiology, ACS develops when the osseous-fascial compartment pressure increases to a level that results in decreased perfusion of the muscle(s) within the specific compartment, potentially leading to irreversible muscle and nerve damage.[14] ACS can occur in any region where fascia surrounds the skeletal muscle.[15] Patients presenting with ACS most commonly demonstrate pain out of proportion on the exam.  Exceptions to this common presentation include:

These exceptions require heightened clinical suspicion, and immediate clinical attention is warranted to delineate a diagnosis to expedite the decision to proceed with surgical intervention.  Classic examination findings include:

Lower leg ACS, specifically isolated to the posterior compartment, will lead to the aforementioned clinical findings, including motor weakness/inability to plantarflex the foot, and weakness of toe flexion and foot inversion. There will be a sensory loss over the lateral part of the leg and foot due to compression of the sural nerve, as well as sensory loss along the plantar surface of the foot and toes due to tibial nerve ischemia.

Diagnosis of compartment syndrome before severe ischemia and necrosis occur is necessary for preventing poor outcomes. The clinical diagnosis in a patient with an intact mental status is often by physical examination alone. Treatment is emergent fasciotomies of the involved compartments.[16]

CECS is clinically differentiated from ACS and is a diagnostic consideration in athletes presenting with lower leg pain often attributable to endurance exercises, including sport-specific activities and training programs.  CECS is thought to occur secondary to increased intramuscular pressures within a specific compartment(s) attributable to exercise and activity.  Unlike ACS, however, CECS occurs across a spectrum of transient ischemia with or without progressive neurovascular dysfunction.[17]  CECS in the lower leg most commonly affects the anterior and lateral compartments, followed by the posterior compartments (superficial in approximately 1 to 3%, and deep posterior in 3 to 10%).[18]

The symptoms are similar to the symptoms of carpal tunnel in the wrist with the median nerve. Symptoms include burning, numbness, tingling, and weakness of the plantar muscle of the foot and toes. The pain worsens with prolonged use such as standing, activity, and motion through the carpal tunnel. Tinel's sign can be elicited with percussion on the tibial nerve, and a positive sign is pain or numbness, or tingling along the distribution of the nerve.

Treatment can include noninvasive modifications such as weight loss, changing daily habits, changing shoes to orthotics, NSAIDs, and osteopathic manipulative medicine. Surgery is possible management for decompression of the tibial nerve, which involves manipulating the flexor retinaculum covering the tarsal tunnel.[19] 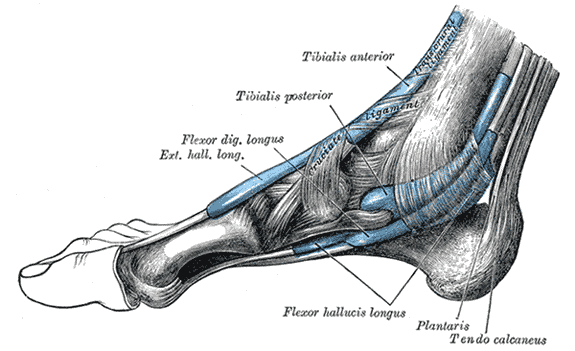