The process of swallowing, also known as deglutition, involves the movement of substances from the mouth (oral cavity) to the stomach via the pharynx and esophagus. Swallowing is an essential and complex behavior learned very early in development. This pathway shares anatomy with the airway; thus, in addition to directing food into the digestive tract, the swallowing mechanism serves as a vital protector of the airway. The reflexive and voluntary actions of over 30 nerves and muscles produce this coordinated movement.[1] Typically, individuals give little thought to the process of swallowing; however, its complexity can lead to significant issues in specific individuals, and as such, there are dedicated fields of speech-language pathology and swallowing rehabilitation.

There is evidence that swallowing begins to develop in utero as early as 15 weeks gestation to regulate amniotic fluid volume.[2] The suck, swallow, and breathing sequence, continues to evolve in the early stages of life as infants are introduced to new foods and begin to control their swallowing consciously.

The process of swallowing involves dozens of muscles from the oral cavity, pharynx, larynx, and esophagus.

The currently accepted model for swallowing describes three main stages: oral, pharyngeal, and esophageal phases. While solids and liquids share common pharyngeal and esophageal phases, they differ slightly in the processing and transport of boluses into the oropharynx during the oral phase. These phases work in a sequential and coordinated fashion that serves to pass a bolus into the stomach and protect the airway from aspiration.

The oral stage is often split into two steps:

The tongue elevates to move the bolus posteriorly into the oropharynx. This bolus is held in the oropharynx until it aggregates with repeated cycles, or the pharyngeal phase initiates.[1]

The processes mentioned above are mostly under voluntary muscle control. The pharyngeal phase, the first irreversible step in the swallowing mechanism, begins when the bolus reaches the palatoglossal arch. Afferent sensory fibers from CN IX, X, and XI in the oropharynx transmit the stimulus to the solitary tract nucleus in the brainstem.[3] Efferent muscle fibers then travel to innervate the muscles of the larynx, pharynx, and esophagus to coordinate a reflex response. This stage serves two primary purposes: 1) directs food into the esophagus, and 2) protects the airway from aspiration. It is characterized by a wave of coordinated stimuli lasting about a second that ends as the food bolus reaches the upper esophageal sphincter (UES).[4]

The pharyngeal phase beings with soft palate elevation via the tensor palatini and levator palatini to seal the nasopharynx to prevent pressure escape into the nasal cavity.

The pharyngeal phase serves to protect the airway via swallowing apnea, a well-coordinated physiologic response where respiration ceases during swallowing.[5] This apneic period tends to interrupt the expiratory phase of breathing, lasting approximately 0.5 to 1.5 seconds, serving to prevent aspiration during inspiration.[6][7] The primary mechanism of airway protection is the closure of the vocal folds. The posterior cricoarytenoid, contracted at rest, is inhibited, and the lateral cricoarytenoids are stimulated to adduct the cords. The oblique and transverse arytenoid muscles bring the arytenoid cartilage together, aiding in glottic closure. Concurrently, the arytenoids are tilted forward to make contact with the epiglottis to assist in opening the passage towards the esophagus.[6][8] While not directly involved in airway protection, retroversion of epiglottis by the tongue helps direct the food bolus towards the piriform fossa and into the esophagus.

3.) Elevation of the hyoid-laryngeal complex

The pharynx becomes elevated and pulled anteriorly by contraction of the suprahyoid muscles, which helps to open the pharyngeal-esophageal transition.

The bolus is moved inferiorly by a peristaltic-like sequential contraction of the superior, middle, and inferior pharyngeal constrictor muscles in a top to bottom fashion.[9] A pattern of rapid stimulation and inhibition in the pharyngeal muscles creates a cranial-caudal wave of pressure that directs the food bolus towards the UES.[3] The speed is remarkably fast, occurring at rates of 20 to 40cm/s.[10] Once initiated, the pharyngeal phase behaves in an ‘all or none’ fashion, much like a reflex, hence why this phase is considered an irreversible step.

The end of the pharyngeal phase involves the food bolus descending through a patent UES into the esophagus. The sphincter remains in tonic contraction at rest to prevent air from entering the esophagus but is opened by three sequential mechanisms: 1) contraction of the thyrohyoid to move the larynx and hyoid superiorly and anteriorly, thereby initiating the opening of the sphincter, 2) manometric relaxation of the cricopharyngeus, and 3) Pressure-dependent distension of the UES by the bolus.[11]

The bolus is propagated inferiorly by a wave of peristalsis once it reaches the esophagus. This is an autonomous process not under voluntary control, much like the pharyngeal phase. It occurs much slower than the pharyngeal phase, at a rate of about 3 to 4 cm/s.[12] This phase ends once the bolus passes through the lower esophageal sphincter (LES) and into the stomach. At rest, the LES is tonically contracted to prevent reflux from the stomach, and it undergoes relaxation during the swallowing phase.

An understanding of the physiology of swallowing plays a crucial role in helping the clinician to determine the cause of dysphagia. Anatomical, functional, and iatrogenic causes affecting any of the stages of swallowing can lead to dysphagia. Some of the complications of dysphagia include the consequences of the inability to eat, such as nutrient deficiency and dehydration, as well as increased risk choking and aspiration pneumonia from regurgitation of lodged food.

While clinicians can use a variety of studies to aid in the diagnoses of dysphagia, such as barium swallow, electromyography, and endoscopy, a detailed history can diagnose the cause of dysphagia 80% of the time.[13] Oropharyngeal pathology typically presents with a history of difficulty initiating swallowing, feeling of food stuck in the pharynx, or coughing and choking during swallowing. The presence of these symptoms may indicate further evaluation of oropharyngeal dysfunction with a barium video-radiographic study. Esophageal dysfunction is further evaluated on the presence of intermittent or progressive symptoms and by dysphagia to solids, liquids, or both. Endoscopy is indicated to assess for the majority of esophageal causes of dysphagia.[14]

These can include obstructive pathology in the pharynx or esophagus, such as strictures or sphincters. Reflux is among the most common causes of strictures in the esophagus. Treatment involves balloon dilation and proton-pump inhibition to prevent a recurrence. A Zenker diverticulum is due to an outpouching of a weakened muscular wall in the posterior hypopharynx. Food can be held in this pouch and regurgitated, leading to aspiration and foul breath. The clinician must also be aware of malignancies, both inside and outside, of the alimentary pathway that can contribute to obstruction. These often present with a more rapid progression of dysphagia and other associated symptoms such as weight loss.

Developmental errors such as cleft palate and lip affect the oral phase, disrupting the sucking reflex and increasing nasal regurgitation and the incidence of sinus infections. Other congenital issues include esophageal atresia. These are repaired surgically early in life to prevent infections and promote normal feeding development.

Iatrogenic causes of dysphagia remains an important consideration. Surgeries involving the tongue, vocal cords, pharynx, and other surrounding structures that directly damage the swallowing mechanism or compromise airway protection may require temporary or permanent alternative nutrition solutions as patients undergoing rehabilitation. Also, radiation can cause stenosis and stricture formation. Physicians should also be aware of medications such as doxycycline, alendronate, and NSAIDs that can cause pill esophagitis, which often presents with an acute sensation of chest pain. Patients should have the medications stopped to prevent further injury, or if stopping the drug is not an option, switched to an alternative less caustic formulation.

The primary neurological causes of dysphagia include strokes, tumors, and inherited neurogenic diseases such as cerebral palsy, amyotrophic lateral sclerosis (ALS), or other neurologic processes. Weak or uncoordinated muscle activity can lead to impaired bolus transport and aspiration. Developmental delays can also present with swallowing difficulties as communication is often impaired. Patients can undergo dysphagia rehabilitation to strengthen and improve the coordination of the swallowing muscles. In severe cases, feeding tubes may be necessary to maintain adequate nutrition

Esophageal dysfunction is relatively common with a variety of causes. A physical exam should look for connective tissue disorders such as scleroderma and CREST syndrome. Achalasia is due to the inability of the LES to relax and can cause dysphagia to both solids and liquids. Dysfunction can also occur in the UES due to the impaired opening of the cricopharyngeus. Dysmotility or spasms can affect the peristaltic movement within the esophagus, leading to intermittent dysphagia. Treatment options include medications that aid in relaxing the muscles and myotomy, which involves a small cut in the sphincter to weaken the tonic contraction. 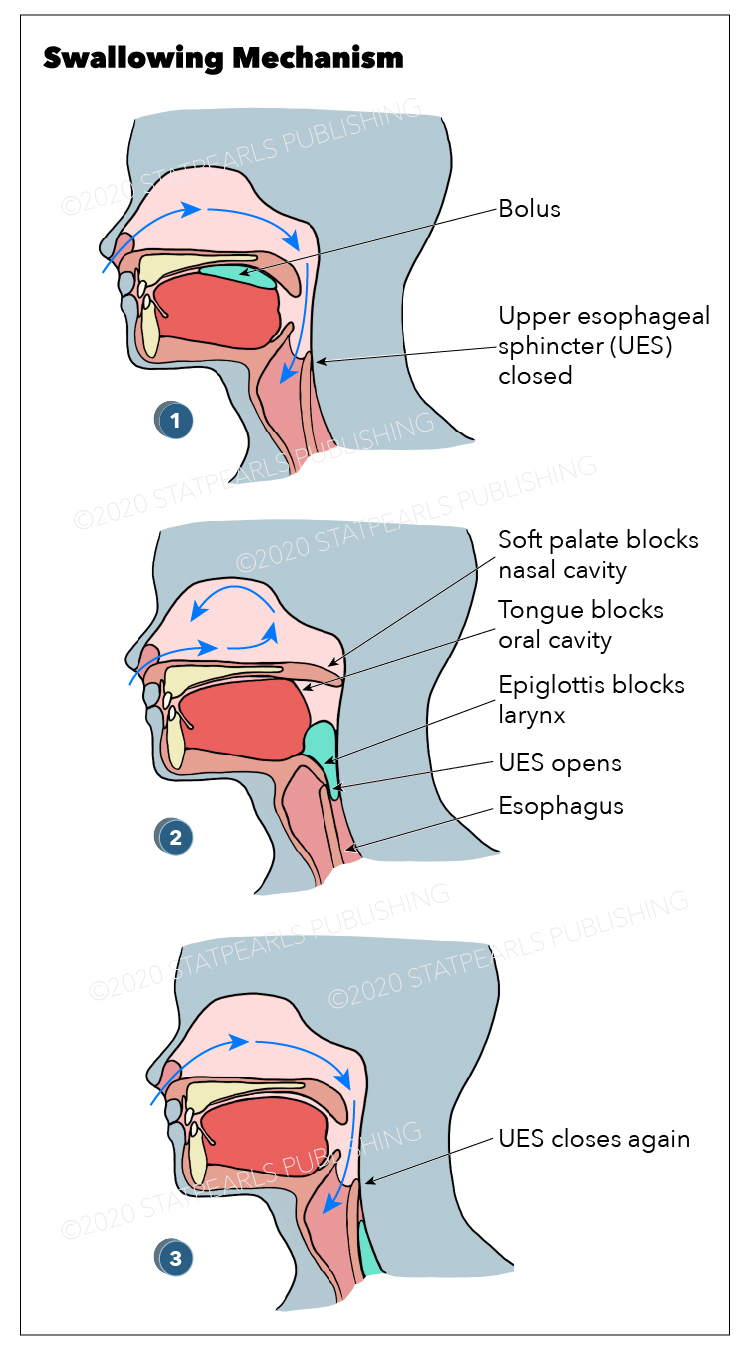 Nishino T, The swallowing reflex and its significance as an airway defensive reflex. Frontiers in physiology. 2012;     [PubMed PMID: 23316169]