The distal branches of the superior mesenteric artery (right colic, ileocolic, and middle colic) and the inferior mesenteric artery (sigmoid and left colic) supply the colon. They are also connected to each other by an intricate arterial arcade along the mesenteric border known as the Marginal Artery of Drummond. This arcade of blood vessels is a normal vascular structure in many healthy people, but it may be absent in others. The marginal artery of Drummond is clinically important because it serves as a collateral supply to the colon when there is a blockage in one of the mesenteric vessels. In people who do not have the marginal artery of Drummond, an ischemic event can lead to bowel infarction and necrosis.

The superior mesenteric artery then gives off several jejunal and ileal arteries to the left, and the middle colic, right colic, and ileocolic arteries to the right. The jejunal and ileal arteries form anastomotic arcades within the mesentery, from which small, straight end arteries called vasa recta supply the intestinal wall. The jejunal blood supply consists of a few arterial arcades with numerous long vasa recta. The ileal blood supply contains more arterial arcades with fewer, shorter vasa recta.

Arterial thrombosis of the superior mesenteric artery is usually due to visceral atherosclerosis. Symptoms typically do not appear until all the branches of the mesenteric artery are blocked. The thrombus results in a gradual decrease in blood flow and over time the patient develops abdominal pain after eating. If not recognized, the bowel can become necrotic. Elevated serum lactate may be found due to bowel ischemia. Emergent CT Angiogram of the abdomen is indicated if one suspects acute mesenteric ischemia.

Treatment options for acute thrombosis include open surgery, percutaneous angioplasty, and stenting or thrombolytic therapy. The condition carries very high mortality if there is a delay in treatment.[9][10]

Nonocclusive mesenteric ischemia results in decreased perfusion of the bowel. It may be due to septic shock, a myocardial infarct, hypovolemia, or the use of high doses of vasopressors which can cause vasoconstriction.

The marginal artery, also known as the artery of Drummond, supplies the proximal descending colon at the splenic flexure. The artery of Drummond is an arterial arcade formed by an anastomosis between the distal branches of the superior and inferior mesenteric arteries. This anastomosis is often weak and tortuous, or may even be absent. Thus the splenic flexure is a watershed area that is prone to ischemia and infarction in the setting of hypoperfusion.

The left renal vein can be compressed between the angle formed by the superior mesenteric artery and the abdominal aorta, resulting in nutcracker syndrome. Symptoms may include hematuria, abdominal pain, and left testicular pain in men or left lower quadrant pain in women. These symptoms are due to the occlusion of the left gonadal vein, which drains into the left renal vein.

Superior mesenteric artery syndrome, also known as Wilkie syndrome, is a rare disorder that results in compression of the vessel. It is believed that there is an acute angulation of the superior mesenteric artery which results in compression between the third part of the duodenum and the abdominal aorta. The syndrome is known to occur in patients with low body weight, most notably young children.[11]

Dissection of the superior mesenteric artery is a rare, but severe condition that has been reported. It presents with severe abdominal pain and bloody diarrhea and is often confused with acute mesenteric ischemia. It is most commonly found on CT angiogram of the abdomen. There is no consensus opinion on the ideal management of superior mesenteric artery dissection. Options include surgery, interventional radiology placement of a stent, or conservative management.[12] 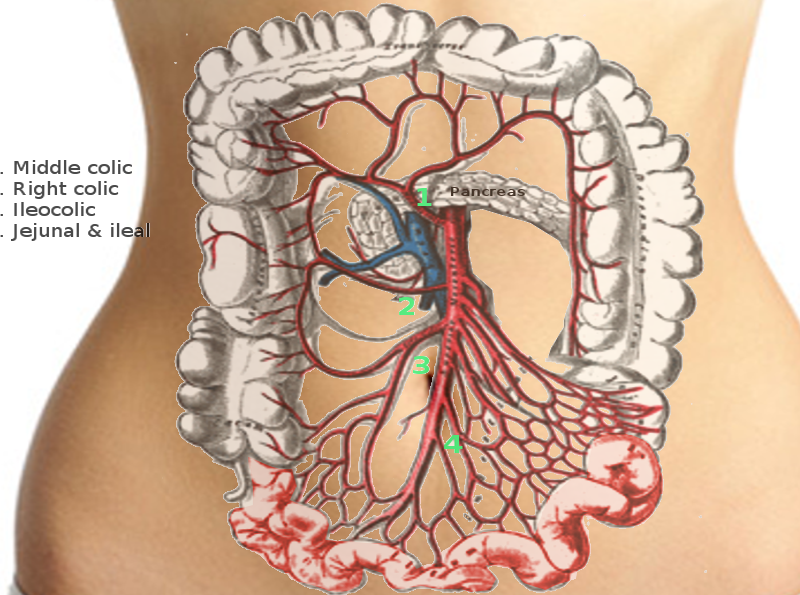 Gourley EJ,Gering SA, The meandering mesenteric artery: a historic review and surgical implications. Diseases of the colon and rectum. 2005 May;     [PubMed PMID: 15933893]