There are over 40 species of funnel-web spiders, with 3 genera restricted to Australia, including the Hadronyche, Illawarra, and the Atrax.  Of all Australian spiders, one species of the Atrax genera, the Atrax robustus, is implicated in the most human fatalities. The Atrax robustus is known as the Sydney funnel-web spider and is native to eastern Australia. Funnel-web spiders are medium to large in size and are dark in color, ranging from black to brown. Funnel-web spiders get their name from their funnel-shaped burrows they spin to trap prey. These spiders reside in cool and relatively sheltered habitats. They are often found under rocks or in rock gardens, in various shrubberies, or under logs. Some funnel web spiders even reside in trees, sometimes several meters in the air. The bite of the Sydney funnel-web spider is potentially deadly, but since the development of the antivenom in 1981 and the advancement of modern first aid techniques, there has been only 1 death associated with this spider's bite and was likely a result of a delayed presentation.[1]

Funnel-web spiders have powerful, sharp fangs that have been known to penetrate fingernails and soft shoes. They are known to be the most dangerous spiders in the world. The silk entrance to the burrow of a Sydney funnel-web spider has a "vestibule-like" structure, and the spider sits just within the vestibule and senses vibrations along the silk "trip lines" and reacts to inject venom into its prey. The tree-dwelling funnel-web spiders can reach 4 to 5 cm in length, with the largest species being the Northern Tree Funnel Web Spider.[2]

All funnel-web spider bites should be treated as potentially life-threatening, even though only approximately 10% to 15% of bites are venomous. Since the venom from the funnel-web spider bite is highly toxic, all species should be considered potentially dangerous.[3] In all the fatalities where the gender of the spider was confirmed, the male funnel-web spider was responsible. Males are more active at night and have been known to enter homes. The onset of severe envenomation is rapid. In one study, the median time to onset of envenoming was 28 minutes, and only 2 cases had onset after 2 hours. In both cases, the bites had pressure immobilization bandages applied. Death may occur in 15 minutes (small children) to 3 days.[1] Younger patients and patients with underlying medical conditions have a higher incidence of death when they are bitten by a funnel-web spider.

Data has been extracted to determine the species-specific envenomation rates and the severity of the funnel-web spider bites and to determine both the efficacy and the adverse events related to the antivenom. The data gathered revealed that there were 198 potential funnel-web spider bites identified. Of those, 138 were confirmed as a funnel-web spider, and 77 of those cases produced severe envenomation. All of the species related to the severe envenomations were attributed to species restricted to New South Wales and Southern Queensland. The antivenom was used in 75 patients, including 22 children, with a complete response in 97% of the positively identified cases.[3] There were 3 adverse reactions which were all in adults (one early mild, one early severe that require epinephrine, and a delayed serum sickness reaction). The researchers concluded that severe funnel-web spider envenomations were confined to New South Wales and southern Queensland, with the tree-dwelling funnel webs having the highest envenomation rates. The antivenom to funnel web spiders was safe and effective, and severe allergic reactions are uncommon. True necrotizing arachnidism appears to be quite rare.

There are a large number of different toxins in the venom of these spiders. They are classified as atracotoxin. These neurotoxins induce the spontaneous and repetitive firing of action potentials in presynaptic autonomic and motor neurons, leading to catecholamine surge. The atracotoxin are also associated with voltage-gated sodium channel toxicity.[4] These are extremely toxic and believed to be the main cause of lethal envenomation syndrome following the bite of a funnel web spider. The venomous component primarily responsible for the envenomation syndrome of the Atrax robustus is a single peptide known as delta-atracotoxin.[5][6]

There is no lab assay available to detect the venom of a funnel-web spider easily. Laboratory evaluation should include serum creatinine kinase, electrolytes, renal function, glucose; arterial or venous blood gas to assess for hypoxia; and coagulation studies to assess for disseminated intravascular coagulation.

Primary consultation should include a medical toxicologist or the local poison center.

Critical care specialists should be consulted for inpatient monitoring for all symptomatic patients.

Recommended follow-up with healthcare team including primary care, nursing, and medical toxicologist should occur for anyone given antivenom, to assure no development of serum sickness.

All treating physicians and primary providers including nurse practitioners should educate on outdoor safety and close follow-up. 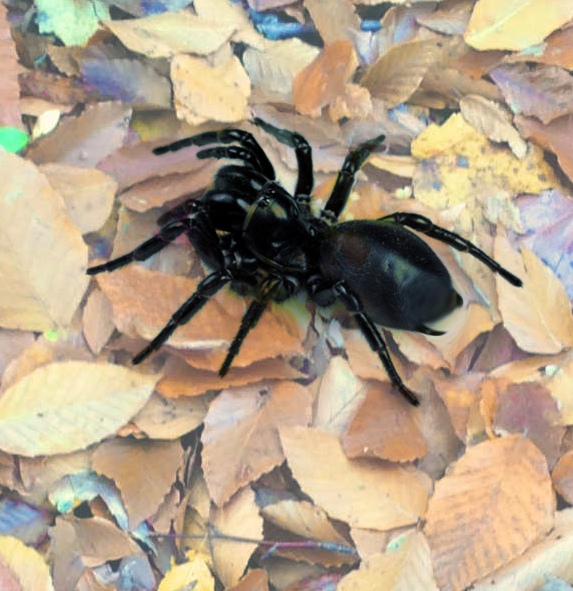