Coral snakes are members of the Elapidae family, and 40 to 50 species exist in the Americas. In the United States, three types predominate: Micrurus fulvius (eastern coral snake, located in Florida and the southeast US) and Micrurus tener (Texas coral snake, located in Texas and Northwestern Mexico), and Micruroides eurxanthus (Sonoran coral snake, located in the Southeastern US and the state of Sonora, Mexico) inhabit the US. Coral snakes in North America (north of Mexico City) are recognized by their circumferential bands (non-circumferential shape is found on the non-venomous shovel-nosed snake) of red, yellow and black. This activity reviews coral snake toxicity, its presentation, and highlights the role of the interprofessional team in its management.

Coral snakes are members of the Elapidae family, and 40 to 50 species exist in the Americas. In the United States, three types predominate: Micrurus fulvius (eastern coral snake, located in Florida and the southeast US) and Micrurus tener (Texas coral snake, located in Texas and Northwestern Mexico), and Micruroides eurxanthus (Sonoran coral snake, located in the Southeastern US and the state of Sonora, Mexico) inhabit the US. [1] Coral snakes in North America (north of Mexico City) are recognized by their circumferential bands (non-circumferential shape is found on the non-venomous shovel-nosed snake) of red, yellow and black (figure 1). In North American snakes only, the color sequence may distinguish the venomous coral snake from non-venomous snakes, such as the king snake, whose pattern is “red on black,” and is demonstrated by the mnemonic “red on yellow, kills a fellow; red on black, venom lack.” Coral snake envenomations are relatively uncommon compared to their pit viper counterparts. However, coral snake venom is very potent and may result in a delayed onset of significant neurotoxicity and respiratory failure. [2]

The venom of M. fulvius and M. tener is a highly potent neurotoxin. M. eurxanthus envenomation is not known to cause significant symptoms in humans, although this species does boast a protective sonic warning capability called a “microfart” (caused by air expulsion from its cloaca). The incidence of significant coral snake envenomation is less than that of pit viper bites for several reasons. Unlike pit vipers, coral snakes are more elusive and will often retreat from any signs of danger rather than confront any potential threats. Hence, coral snake bites commonly occur after intentional handling of the snake by humans or from harassment by curious animals.

Unlike pit vipers, whose venom causes local tissue necrosis and coagulopathy, coral snake venom gains systemic access through the lymphatic veins to cause neurotoxicity and respiratory muscle weakness using competitive inhibition of the muscarinic acetylcholine receptors at the neuromuscular junction. [4]

Both pre-synaptic and post-synaptic inhibition (by alpha neurotoxins) have been documented. Additionally, phospholipase A2 may cause myotoxicity and rhabdomyolysis. [5]

When a victim presents with a reported coral snake bite or mucous membrane exposure to its venom, it is important to determine when the bite occurred as neurotoxic effects and respiratory insufficiency may be delayed up to 13 hours. [6] If possible, the identity of the snake should be verified through photographic images. Initial presenting symptoms may include mild pain at the bite site (no puncture marks may be present), nausea, vomiting, dizziness, and abdominal pain. Neurotoxicity may present with progressive motor deficits including cranial nerve deficits, such as ptosis, dysarthria, and dysphagia as well as descending muscle weakness. Importantly, patients should be closely monitored for signs of respiratory muscle weakness with pulmonary insufficiency; this is the most life-threatening complication of coral snake envenomation.

Evaluation of coral snake envenomation victims should focus on assessment of the development of neurologic deficits and respiratory compromise. [7] Serial pulmonary function testing is helpful to predict respiratory insufficiency. Respiratory compromise is suggested by an FVC (forced vital capacity) less than 50% predicted, MIP (maximal inspiratory pressure) less negative than -30 cmH2O, or an MEP (maximal expiratory pressure) below 40 cmH20. Additionally, declines in mental status, bedside capnography (ETC02) and blood gas measurements may be used to monitor for hypercarbia or respiratory acidosis that may indicate impending respiratory failure. Rhabdomyolysis may occur in M. fulvius envenomation and should be evaluated as clinical scenario warrants. Unlike pit viper envenomation victims, significant bite area tissue necrosis and coagulopathies are uncommon in coral snake envenomation.

General treatment measures include ensuring a safe scene (remove from snake exposure), local wound care (although wounds are typically minimal), minimization of movement (relative immobilization in a functional position), avoiding activities that increase heart rate, and promoting patient (and family) relaxation (to decrease systemic propagation of venom). Tetanus prophylaxis is also considered standard in the treatment of snakebites. Pressure immobilization bandages [8] may be placed over the bite site with just enough force to allow arterial and venous flow but decrease lymphatic flow, potentially decreasing the systemic absorption of coral snake venom through lymphatics. [9] Tourniquets, venom extraction (either by incision and oral suction, manually or by a mechanical device), and cryotherapy are not recommended. If possible, avoid medications that may cause muscle weakness or decreased respiratory function, as these may inhibit the ability to assess for neurotoxic effects due to envenomation.

Due to the possibility of the delayed onset of life-threatening respiratory compromise, all patients with suspected coral snake envenomation warrant close observation for at least 24 hours at an appropriate level of care for close respiratory monitoring and frequent serial neurologic exams. Patients who demonstrate respiratory insufficiency warrant advanced airway management and treatment with coral snake antivenom and/or other pharmacologic measures, such as anticholinesterases (discussed below). Airway compromise may develop rapidly, so advanced airway medications and equipment should be prepared early and readily available.

The North American Coral Snake Antivenin (NACSA) is a horse-derived IgG antibody used for both M. fulvius and M. tener envenomation in both adults and children. Its use has not been reported in patients who are pregnant. The administration of coral snake antivenom is recommended at the first sign of neurologic deficit or respiratory insufficiency, as some data suggest decreased need for intubation or decreased duration of muscle paralysis and intubation. On the other hand, other data suggest no differences in intubation rates when NACSA is given prophylactically before symptom onset. So, should practitioners administer NACSA empirically to patients without neurologic deficits or respiratory compromise? This is a controversial decision, but given the additional risk of immediate and delayed hypersensitivity reactions (discussed below) and mixed clinical evidence results regarding prophylactic antivenom benefit, it is reasonable to procure antivenom early but withhold administration until the development of the first neurologic symptoms. In any case, the best course of action is to contact the Poison Control Center or a toxicologist for treatment guidance. Currently, there is a limited supply of the NACSA, as production ceased in 2006. The known remaining vials of this antivenom have passed the manufacturer’s expiration date (2008), but the FDA extended the expiration date through January 31, 2019, for NACSA Lot L67530.[10] If treatment with antivenom is indicated, contact the Poison Control Center (1-800-222-1222) or a toxicologist for the acquisition of the antivenom and further recommendations. Also, the FDA Office of Vaccines, Blood, and Biologics (301-827-3524) may be contacted for information regarding the risks and benefits of administering expired antivenom. Moreover, it is recommended to contact Poison Control early to assist with location and mobilization of NACSA, as significant time and mobilization resources may be required to procure it. [11] Once the decision is made to administer NACSA, the patient undergoes a test dose of the included horse serum for reactions, and after that, the recommended initial dose of NACSA is three to five vials by slow intravenous push for both adults and pediatrics. Of note, a potential new coral snake antivenom, an equine-based F(ab’), is currently in clinical trials in the US. Other antivenoms useful for coral snakes may be available (such as Coralmyn, manufactured in Mexico) and recommended by Poison Control. [12]

As discussed earlier, NACSA is an equine-based IgG serum, and there is a risk of both immediate and delayed hypersensitivity reactions. [13] When giving NACSA, clinicians should watch for signs of hives, itching, shortness of breath, hypotension, or angioedema as evidence of an allergic reaction. If patients demonstrate signs of an immediate hypersensitivity reaction, infusion of the antivenom should be stopped immediately, and doses of epinephrine IM (0.3 mg if greater than 30kg, 0.15mg if less than 30 kg of the 1:1000 concentration), antihistamine, corticosteroids and albuterol nebulizers should be given as needed based on clinical symptoms.

If the patient develops neurotoxicity or respiratory compromise and coral snake antivenom is not available, another pharmacologic treatment option is a trial dose of an anticholinesterase, such as neostigmine. Neostigmine acts by restoring neuromuscular transmission by increasing concentrations of acetylcholine in the neuromuscular junction when weakness is due to the post-synaptic blockade. Pretreatment with atropine or glycopyrrolate should be considered to prevent potential excessive cholinergic effects of neostigmine. Again, poison control and toxicologist consultation is recommended to guide treatment.

The management of coral snake bite is with an interprofessional team that consists of an emergency department physician, poison control, internist, intensivist, a toxicologist and ICU nurses. These patients need admission and close monitoring as life-threatening complications of coral snake bites are related to respiratory muscle weakness and need for ventilatory support. Although significant envenomation is uncommon due to the coral snake’s less-aggressive behavior and difficult mechanism of delivery, the potential of life-threatening respiratory insufficiency delay up to 13 hours warrants very close observation after a reported exposure. While limited in supply and difficult to obtain and transport, coral snake antivenom should be given to all patients bitten by coral snakes regardless of symptoms. The outcomes in patients treated with antivenom is excellent but if there is a delay in treatment, then fatalities are known to occur. [3][14](Level V) 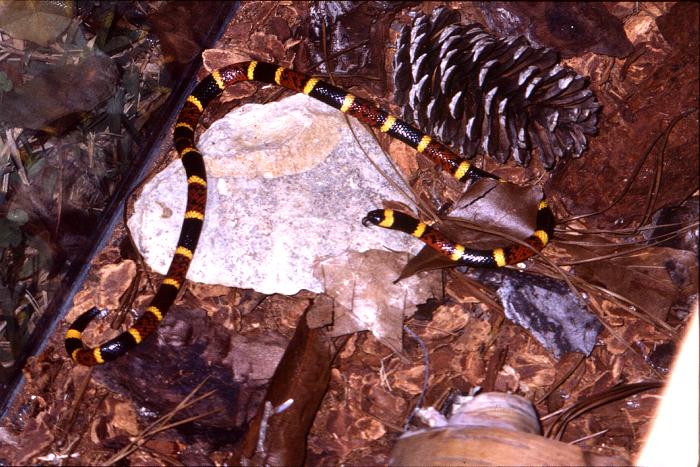