The skin is the body's largest and primary protective organ, covering its entire external surface and serving as a first-order physical barrier against the environment. Its functions include temperature regulation and protection against ultraviolet (UV) light, trauma, pathogens, microorganisms, and toxins. The skin also plays a role in immunologic surveillance, sensory perception, control of insensible fluid loss, and homeostasis in general. The skin is also highly adaptive with different thicknesses and specialized functions in different body sites. This article will discuss the anatomy of the skin, including its structure, function, embryology, blood, lymphatic, and nerve supply, surgical, and clinical significance.[1][2]

The dermis is divided into two layers, the papillary dermis (the upper layer) and the reticular dermis (the lower layer).

The functions of the skin include:

Embryologically, the epidermis originates from the surface ectoderm. It is infiltrated with pigment-producing cells known as melanocytes, which originate from the neural crest.[3] Other cell types normally present in the epidermis include keratinocytes, antigen processing Langerhans cells, and Merkel cells (tactile receptors that sense pressure changes at the bottom of the epidermis).

The dermis is embryologically derived from the mesoderm and contains connective tissue macromolecular components and cells, including elastic fibers, collagen, nerves, blood vessels, adipocytes, and fibroblasts.[1][2]

The skin is highly vascularized and is supplied by plexuses found between the reticular and papillary layers of the dermis. The blood supply originates from an extensive network of larger blood vessels and capillaries that extend from regional branches of the systemic circulation to local sites throughout subcutaneous tissue and dermis, respectively.[4]

An extensive lymphatic framework runs alongside many of the skin’s blood vessels, particularly those attached to the venous end of the capillary networks.[3]

Several skin receptors play specific roles in our ability to physically perceive the changes in the external environment.

Dermatomes are areas of skin mainly supplied by a single spinal nerve. Eight cervical nerves contribute to the dermatomes (except for C1), 12 thoracic nerves, five lumbar nerves, and five sacral nerves. Each of these nerves relays sensation (including pain) from a particular region of the skin to the brain.[4]

Arrector pili muscles, the smallest skeletal muscles of the body, are found in all areas of the skin that contain hair follicles. These tiny muscular structures control the positioning of hairs and the activity of sebaceous glands in response to environmental induction, such as heat and abrasion. The arrector pili muscles contract and raise the hairs under conditions of stress when the sympathetic nervous system is activated, such as during the fight or flight response, although some research calls this into question.[1][2][5] They also perform this action in response to cold, creating the phenomenon colloquially known as "goosebumps."[6]

The multiple layers of the skin are dynamic, shedding and replacing old inner layers. The thickness of skin varies based on its location, age, gender, medications, and health affecting the skin’s density and thickness. The varying thickness is due to changes in the dermis and epidermis. Thick skin is present on the palms and soles, where there is marked keratinization and the stratum lucidum layer. Thinner skin is present on eyelids, axillae, genitals, and the mucosal surfaces exposed to the external environment, such as oral mucosa, vaginal canal, and other selected internal body surfaces.

Primarily due to the effects of androgens, adult males typically have thicker skin than females in most areas of the body. Children have thin skin, which gradually thickens until the fourth decade of life, affected by the concentration of sex steroids, general health, and hydration. The skin begins to thin again during the fifth decade of life, primarily due to changes in the dermis with loss of epithelial appendages, elastic fibers, and ground substance, among others. Genetic and environmental factors also affect skin thickness. For example, a person with an occupation requiring much outdoor exposure to the sun and ultraviolet radiation will tend to show premature skin aging signs sooner than a person working indoors. Genetics also influence the natural skin contour and color; for example, people of African-American descent typically exhibit thicker and more lustrous skin compared to people of Anglo-Saxon ancestry.[1][2][7][8]

Surgical incisions are usually made along the relaxed skin tension lines to improve healing and reduce scarring, especially in cosmetic surgical procedures.[9]

These lines are also referred to as “cleavage lines.” They closely match the alignment of bundles of collagen fibers within the dermis. Their discovery followed the investigations of the Austrian anatomist Karl Langer, who noticed a consistent pattern of ellipsoidal lines over the skin surface of the studied cadaver specimen after repetitively puncturing their skin with a circular tool. His reports referred to the lines as elongated creases following singular ellipsoidal patterns in different directions based on the specific body areas.

Lines and creases develop over the bony articulations (joints) and high friction surface areas, such as the knees and elbows. Contraction of the skin causes wrinkles that lie perpendicular to the skeletal muscles underneath the skin, which act as vectors of physical tension or stress points.

The three most common skin cancers encountered are basal cell carcinoma, squamous cell carcinoma, and melanoma. Skin cancers are associated with UV damage, sporadic mutations, and genetic alterations. Clinicians need to encourage patients to protect their skin from harmful UV rays to reduce the risk of skin cancers; this can be by wearing clothing that limits skin exposure or by using sunscreens with a sufficiently high SPF value.[10]

Acne is one of the most common skin disorders and results from the plugging of hair follicles with exfoliated keratinocytes and oil. It is common in youth but can also affect adults. The extent and severity vary, including comedones, papules, pustules, nodules, cysts, and scars.

Skin infections include cellulitis, erysipelas, and impetigo caused by staphylococcal and streptococcal bacteria.[3][4]

In the human body, the sensory fibers carrying pain stimuli are arranged into dermatomes, which are segmentally distributed across the entire body surface (illustration below). Dermatomes develop embryologically. 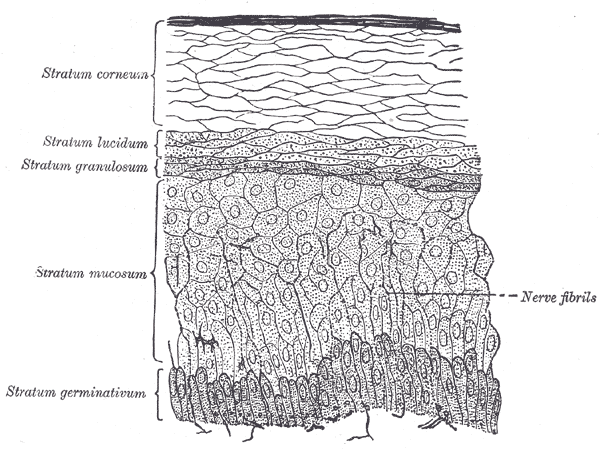 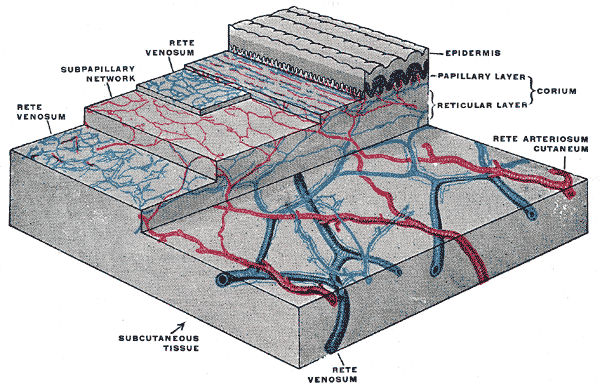 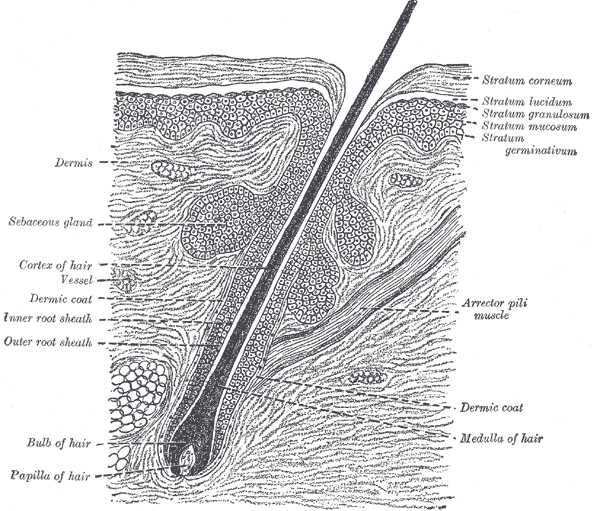 Allen N,Damian DL, Interventions to Increase Sunscreen Use in Adults: A Review of the Literature. Health education & behavior : the official publication of the Society for Public Health Education. 2021 Oct 12     [PubMed PMID: 34636262]