Bones are often thought of as static structures which only offer structural support. However, they truly function as an organ. Like other organs, bones are valuable and have many functions. Besides providing shape to the human body, bones permit locomotion, motor capability, protect vital organs, facilitate breathing, play a role in homeostasis, and produce a variety of cells in the marrow critical for survival.  Bones are continually undergoing structural and biological change, and remodeling of bone continues throughout life based on the demands placed upon them.

The skeletal system is capable of responding to increased stress such as during resistance training, by increasing osteogenesis, or new bone formation. In fact, resistance exercise has been shown to be a viable therapeutic option in osteosarcopenia,[1] which is the loss of bone and muscle density due to aging. In addition to responding to external stimuli, they can also respond to internal stimuli for mobilization of their content. Bones can enlarge or become smaller, grow strong or weaker, and break when subjected to the application of excessive force. In the event of damage, they are one of the very few organs in the body that can regenerate without an obvious scar. There are typically around 270 bones in human infants, which fuse to become 206 to 213 bones in the human adult. The reason for the variability in the number of bones is because some humans may have a varying number of ribs, vertebrae, and digits. They vary in size, shape, and strength to respond to the demands of performing delicate or gross motor tasks. Bones of the middle ear have minimal strength but play a role in the transmission of sound waves to the auditory organs of the inner ear. Other bones, such as the femur, are exceptionally robust and can withstand enormous force before they fracture.

From a microanatomical perspective, bones are highly specialized connective tissue with a built-in ability to remodel based on the demands placed on them. The primary cell responsible for building bone is the osteoblast. Osteoblasts secrete a fluid known as osteoid, which is rich in a protein produced by the human body known as type I collagen. Another component of the osteoid is the ground substance, composed primarily of osteocalcin and chondroitin sulfate. For the bone to become hard, the osteoid must undergo mineralization with inorganic components such as calcium and phosphate.  These minerals are typically absorbed in the diet, with a familiar source being dairy products. It is for this reason that bone is a major storage reservoir for these minerals should the body should need them. Interestingly, a study published in Food & Function by Burrow et al. has suggested that the specific source of these nutrients may have an impact in the structural integrity of bone. This study demonstrated the superiority of sheep’s milk over cow’s milk for this purpose but was only conducted on rats, so its applicability to humans is questionable.[2] Once the osteoid has mineralized, the osteoblast embedded in its own matrix becomes known as an osteocyte or a mature bone cell. The osteocytes are typically found in lacunae arranged concentrically around a central opening known as a Haversian canal, which houses the blood supply for the bone cells. They can also pass cellular contents from one to another via gap junctions through interconnected canaliculi. Volkmann’s canals run perpendicularly to the Haversian canals and connect them to the blood supply from the periosteum, a soft tissue covering on the outer surface of the bone. This entire functional unit minus the periosteum is known as an osteon.

In order for the bone to be adequately remodeled based on the functional need, cells must be present to break down the mature bone. The cells responsible for this task are the osteoclasts, multinucleated cells derived from macrophages found in Howship’s lacunae on the surface of the bone. They are under the control of the osteoblast which expresses receptor activator of nuclear factor kappa B (RANK), to which the osteoclast expresses the ligand (RANKL).  The osteoblast can produce osteoprotegerin, which interferes with RANK-RANKL interaction and therefore does not allow osteoclast differentiation. Once activated, the osteoclast utilizes acid produced in a reaction facilitated by the enzyme carbonic anhydrase, along with a collagenase enzyme, to break down the bone.

From a gross anatomical perspective, most bones have a well-organized thick outer shell known as the cortex, which is made up of the osteons. The inner portion of these bones is trabecular, meaning beam-like and appearing as a meshwork, especially at the epiphyses.  It is also sometimes referred to as cancellous bone or somewhat erroneously as “spongy” bone. The mesh-like quality allows for spaces to exist in which to house bone marrow interlaced with mineralized bone tissue, which allows for utilization of the space inside the bone for the crucial task of erythropoiesis while maintaining structural integrity. In a healthy adult, the ratio of cortical to trabecular bone is approximately 80:20. The vertebrae are the only bones that lack a true cortex and are entirely covered by a dense trabecular network. All bones are surrounded by the periosteum which plays a role in perfusion and supply of nutrition to the outer third segment of bone, in addition to the innervation. The rest of the bone receives blood supply via the Volkmann’s canals, which penetrate the cortex and supply the inner two-thirds of cortical bone and the marrow cavity.

Bones fall into three general classifications: flat bones, short bones, and long bones. Long bones evolve via the process of endochondral ossification (see: embryology). Long bones vary in size from the long femur to the short digital bones of the phalanx. They are typically tubular and are longer than they are wide, having several distinct anatomical zones. These three zones are the diaphysis, or shaft, the epiphysis, or the ends, and the metaphysis, the region in between the two. The diaphysis contains the medulla of the bone, which houses bone marrow. The marrow is the primary tissue responsible for the production of erythrocytes, leukocytes, and platelets. The epiphysis is the terminal end of the long bone that is typically responsible for articulation. It is also the primary source of red bone marrow in long bones, which allows erythropoiesis. The metaphysis is the region of the bone that contains the epiphyseal plate in children, which is responsible for growth as it remains cartilaginous until after puberty. After ossification in adulthood, the metaphysis is primarily responsible for transferring load bearing from the epiphysis to the diaphysis.

Short bones evolve from the same cellular precursors as long bones, but they are not structurally similar. The short bones often take distinct shapes, for example, the carpal bones in the wrist.

Flat bones form by a process called intramembranous ossification (see: embryology). These bones also tend to have unique, plate-like shapes such as the sternum or the fused bones of the skull.

Of the three primordial tissue layers in the human embryo, bone tissue derives primarily from the mesoderm. Some craniofacial bones and the bones of the middle ear arise instead from neural crest cells. In developmental disorders of neural crest cell migration, craniofacial malformations are sometimes evident. During development, long and short bones develop via the process of endochondral ossification. In this process, bone replaces a cartilaginous precursor template during maturation.

Flat bones form via a process known as intramembranous ossification. In this process, osteoblasts derived from mesenchymal stem cells produce bone spicules, which fuse one to another, forming trabeculae. The trabeculae grow to connect with the other trabeculae and produce woven bone. Mesenchymal cells surrounding the trabeculae serve to establish the periosteum. Osteogenic cells that arise from the periosteum grow along the surface of the woven bone and become lamellar bone after mineralization.

Fractures of bones have varying clinical significance ranging from simple fractures, for which supportive measures, reduction, splinting, or casting is indicated, to potentially complicated fractures, which may become surgical cases.  One such example of a potential surgical emergency is a blowout fracture of the orbital floor, which may lead to globe muscle entrapment, diplopia, and subsequent activation of the oculocardiac reflex.[3]

Novel technologies in the field of augmented reality are being utilized experimentally to help train orthopedic surgeons to perform operations.[4] Success in this field will undoubtedly allow the technology to be expanded to other surgical fields, thus improving surgical outcomes and surgeon skill without compromising patient care. Besides the development of surgical expertise, a thorough understanding of bone structure and physiology is necessary to develop a greater appreciation for how native bone interacts with orthopedic implants, and what stresses cause failure of these interfaces, which will lead to improved patient outcomes. A 2018 study published in the Journal of Orthopedic Research by Gonzalez et al. called for a greater diversity of tests to be performed to assess the performance of cementless total knee replacements. The authors argue that finite elemental studies, which are typically done to evaluate the interaction between implants and bone, should utilize additional parameters aside from peak load, which is the traditional metric.[5]

Other clinical issues that may arise within the skeletal system are primary malignant neoplasms such as osteosarcoma, Ewing sarcoma, chondrosarcoma, multiple myeloma, fibrosarcoma, and malignant giant cell tumors.  A bone may also become infected with pathogenic microorganisms, a condition known as osteomyelitis, which is often seeded by a dead piece of bone tissue known as a sequestrum. Avascular necrosis is another potential clinical condition. In this scenario, the bone loses its blood supply and undergoes necrosis, leading to dead bone tissue retained in the body. The femoral head is particularly susceptible due to its blood supply as is the scaphoid when displaced in a fracture because of its retrograde blood supply — a weakness of bone due to loss of density results in osteoporosis, a condition typically seen in the elderly. Dietary deficiencies in vitamin D can lead to rickets in children and osteomalacia in adults.  These conditions present with weak, soft bones, bone pain, and often the characteristic bent shins seen in children with rickets. When vitamin D is not available at physiologically adequate levels, the osteoid secreted by osteoblasts is not mineralized, leading to these conditions.

The above does not represent an exhaustive account of each of the potential clinical scenarios in which the skeletal system may play a role as that is beyond the scope of this article.  It should, however, allow for a base-level understanding of the structure and function of bone, and why it is essential for clinicians to consider this dynamic organ system. 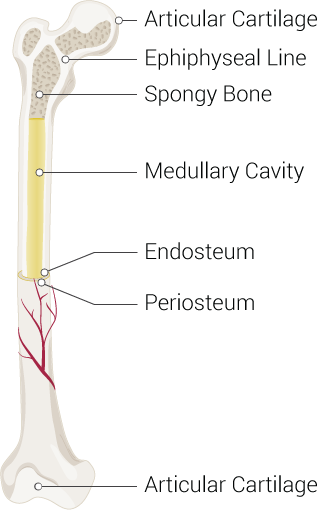