Single lung ventilation, also known as 'One Lung' ventilation, is a method of ventilation which was first conceptualized by physiologists Eduard Pflüger and Claude Bernard who studied gas exchange in dogs using a lung isolation catheter.[1] Wolffberg isolated the two lungs using the catheter in 1871 which is the first reported concept of an endobronchial single-lumen tube. The first instance of clinical use in humans was by Loewy and von Schrotter with lower lobe bronchus catheterized under fluoroscopic control. Head designed the first double lumen tube in 1889 which had two tracheal cannulas - one short tracheal and one longer endobronchial one. Gale and Walters in 1932 advanced Head's design and created the prototype for the modern day double lumen tubes. Double lumen tubes paved the way for one-lung ventilation offering better control of ventilation and more efficient separation of the two lungs.

Single lung ventilation involves ventilating one lung and letting the other collapse for providing surgical exposure in the thoracic cavity or isolating ventilation to one lung. The protective role of the single lung ventilation involves protecting one lung from the ill effects of fluid from the other lung - which may be blood, lavage fluid, malignant or purulent secretions. Thus it is prudent to ensure perfect placement of the tube as a misplaced tube defeats the goals of lung isolation or differential ventilation. This is ensured by bronchoscopy done after tube placement and after any position changes thereafter. One lung ventilation is used to facilitate a wide variety of procedures on ipsilateral thoracic or mediastinal structures as well as to provide lung isolation; this is made possible by the use of double lumen tubes, bronchial blockers, and endobronchial tubes. A familiarity with the use of these instruments and the physiology of one lung ventilation is essential to the performance of safe anesthesia.

A good understanding of airway anatomy and the tracheobronchial tree is essential to performing safe one-lung ventilation. The fiberoptic bronchoscopy enables a good visualization of the airway anatomy. The first branching point in the airway is the carina - which marks the bifurcation of the trachea into the two mainstem bronchi at the level of the sternal angle - left and right main bronchus. The trachea is about 10 to 13 cms long and has 12 concentric cartilaginous rings. These rings are deficient in their posterior aspect and thus for C-shaped rings as seen on a cross-section. The trachea divides in an area known as the carina which marks the division into left and right main bronchus.

The indications of single lung ventilation aim at facilitating surgical exposure by isolating the lung away from the field of surgery or preventing further lung trauma by providing selective ventilation as well as preventing infection or secretions from entering the healthy lung.

For control of ventilation:

These are some of the relative contraindications for single lung ventilation.

Single lung ventilation is achieved with the use of special airway devices such as double lumen tubes (DLT) and bronchial blockers (BB) which selectively direct the airflow to one lung. They are used to collapse one lung selectively for surgery on the ipsilateral side.

Double Lumen Tubes: The most common design of the double lumen tube used in the present practice of thoracic anesthesia is the Robertshaw design. It is available in left and right-sided types, and varying sizes from 26 Fr to 41 Fr.  The size denotes the external diameter of the tube in cms.  The Robertshaw design of the DLT comprises two semicircles placed back to back to form two independent lumens that can be ventilated independently of each other. The lumens have different openings depending on which sided DLT is present. The right-sided DLT has a curve to the right, and similarly, the left-sided DLT has a curve to the left. The double lumen tube cuffs are high volume and low-pressure cuffs.[2][3]

Connector: The connector is an important component of the Double lumen tube as it provides the user with an opportunity to selectively block either lumen or ventilate bilaterally. The connector piece is composed of a Y-shaped piece which has two openings - one each for the connection to the bronchial and tracheal lumen respectively and a common portion that fits into the anesthesia circuit. The connector usually has tracheal and bronchial lumen parts made of different colors for ease of use. Universally the blue color is used by manufacturers to denote the endobronchial lumen/cuff. The cuffs are colored similarly to the connector tubes to maintain uniformity in identification. This safety mechanism ensures correct side lung collapse and ventilation achieved by clamping the side on which lung needs to collapse temporarily.

Bronchial Blockers: Bronchial blockers are used to achieve single lung ventilation by blocking either left or right primary bronchus. Several manufacturers produce bronchial blockers with different designs. However, their basis is on a simple design comprising an inflatable low pressure, high volume cuff at the end of a catheter. The advantages offered by a bronchial blocker over a DLT include the ability to place through an existing endotracheal tube, ability to use in patients with airway trauma and the ability to perform selective lobar blockade if needed. Bronchial blockers are not without their own disadvantages. They require a minimum of 7.5 endotracheal tubes in place for introduction into the airway. They allow the slower collapse of the lung. Owing to the variable take-off of the right upper lobe, bronchial blockers are often difficult to position to seal off the right upper lobe. They are also much more prone to dislodgement when compared to Double lumen tubes.[4]

Fiber-optic Bronchoscope: A fiberoptic scope is mandatory when attempting to place a double lumen tube; this is because accurate positioning is essential to achieving a good seal and lung isolation. Malpositioned tubes are avoided by checking the tube position after the patient is in place in the final position for the procedure.

Endobronchial Tubes: Endotracheal tubes may be placed endobronchially to provide one-sided ventilation. The major disadvantage of such a technique is the inability to have access to the non-intubated lung. Endobronchial tubes are preferred in specific clinical scenarios to a DLT, such as patients with previous neck or oral surgery who present with a difficult airway and require adequate lung separation. The placement of a DLT is more challenging than that of an endobronchial SLT. DLT placement has higher chances for airway injury and bleeding. Endobronchial tubes may be mandatory in patients requiring lung isolation who have a short or long term tracheostomy present before the procedure.[5][6][7]

Patients usually undergoing single lung ventilation for a variety of procedures have underlying pulmonary disease. Patients should be evaluated comprehensively for their primary disease prior to performing the surgical procedure. Echocardiography may be useful in patients with cor pulmonale and may provide information about baseline cardiac function and reserve.

A review of the relevant radiological anatomy on a case to case basis may help plan anesthetic management for single lung ventilation. This review will also allow proper preparation for patients who require specialized airway management. Presence of decreased baseline function due to large effusions, consolidations and atelectasis predispose patients to hypoxemia during the procedure, which may obviate the need to use higher fractions of inspired oxygen during the procedure. Presence of any bullae on the non-operative lung may provide clues to patients more likely to develop a pneumothorax in the perioperative period. Tumors need to be evaluated for the presence of any paraneoplastic syndromes as their presence may guide anesthetic management.

Special considerations need to be placed on patients age as it is an independent risk factor which decides complication rates in patients undergoing pulmonary resection using single lung ventilation. Elderly patients have been found to have higher morbidity and mortality from pulmonary resections. Patients undergoing lung resections need additional testing to predict the risks involved in lung resection besides age. The most common tests used for such an assessment are FEV1 (forced expiratory volume-one second) and DLCO (diffusing capacity of the lungs for carbon monoxide).

The cut-off for the stair climb test is 22 meters. Incremental shuttle walk test distance greater than 400 meters denotes a maximal oxygen uptake of (VO max) greater than or equal to 15 mL/kg per minute. Such information may help the physician interpret the procedural risks and better clinical outcomes for patients undergoing single lung ventilation.

DLT placement technique: After inducing the patient with general anesthesia and confirming complete neuromuscular blockade, the following steps are taken to place a Left sided DLT

Inability to perform a direct laryngoscopy is a contraindication to use of a DLT. In such a situation a bronchial blocker may be a suitable alternative.

During single lung ventilation, the ventilation to one of the lungs is interrupted. However, the perfusion is still present in the non-ventilated lung, which leads to an intrapulmonary shunt in the form of wasted perfusion to the non-ventilated lung. Protective mechanisms like hypoxic pulmonary vasoconstriction can counteract hypoxia to a certain degree. However, it is mandatory for the anesthesiologist to have measures in place for hypoxemia that may arise during single lung ventilation. Ventilation and perfusion (V- Q) matching plays a significant role in the management of oxygenation in patients on single lung ventilation. Some authors note that oxygenation is much better in the lateral decubitus position when compared to the supine position.

Classically, an inspired oxygen fraction (FiO2) of 1.0 has been advocated while performing one-lung ventilation. The rationale behind using a higher inspired fraction of oxygen is to have a safety margin. Higher Fio2 also leads to vasodilatation, and this may help increase the blood to the ventilated lung. Oxygenation at FiO2 of 1.0 can lead to atelectasis, so it is advisable to initiate with a Fio2 less than 1.0 and increase if needed.

If hypoxia develops during the performance of one lung ventilation the following step s must take place :

The lateral decubitus position under anesthesia: Under anesthesia, there is a decrease in functional residual capacity. The upper lobe moves under anesthesia to a more favorable portion of the compliance curve versus the lower lung which lies now on a less favorable portion of the compliance curve. Neuromuscular blockade contributes to abdominal contents pressing against the dependent hemidiaphragm thereby restricting ventilation. Open non-dependent lung leads to variation in the compliance and thus worsens ventilation-perfusion (V/Q) mismatch - thereby leading to hypoxemia.

Single lung ventilation leads to a right to left intrapulmonary shunt as the non-dependent lung continues to undergo perfusion with no ventilation, leading to a widened alveolar-to-arterial (A-a) oxygen gradient which may contribute further to hypoxemia. Factors leading to a decrease in blood flow to the ventilated lung additionally leads to hypoxemia. Such factors include:

Carbon dioxide elimination is usually unaffected in using one lung ventilation with adequate maintenance of minute ventilation. Both lungs may be affected independently by single lung ventilation.  The ventilated dependent lung is prone to ventilator-induced lung injury due to higher tidal volumes used. The non-dependent non ventilated lung is prone to injury by surgical trauma and ischemia-reperfusion injuries. Consideration of these physiological changes that occur in single lung ventilation is vital to the safe performance of the anesthetic technique and airway management.

Single lung ventilation aims at two separate goals - to maintain adequate oxygenation and to maintain lung isolation and lung protection. The challenges faced by an anesthesiologist in performing one lung ventilation arise from a combination of lateral decubitus positioning, open pneumothorax, and the anesthetic technique. The lateral decubitus position brings about physiological changes in the ventilation-perfusion matching, and this is subsequently altered under anesthesia by the effects of neuromuscular blockade, open thorax, hypoxic pulmonary vasoconstriction, surgical retraction, differential blood flow to the dependent and the non-dependent lungs. 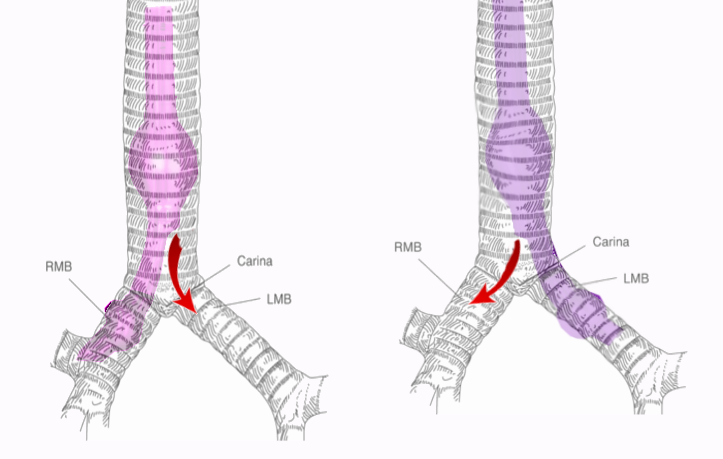